Training session with David Moyes. Set-piece practice with Kevin Nolan and Paul Nevin. Then to the Rush Green bootroom to save West Ham kit-man James Saban a job by cleaning his own boots – a Friday tradition he has upheld since becoming a professional footballer in 2008.

That’s the schedule for Aaron Cresswell on Friday. First, though, this likeable left back is here to talk with Sportsmail’s Jamie Redknapp about flying.

How West Ham are flying high in the Premier League. How they’re flying around the continent and are the bookmakers’ favourites to win the Europa League. How he went flying into Jordan Henderson before the international break (our former Liverpool man couldn’t resist mentioning that challenge). KIERAN GILL listened in… 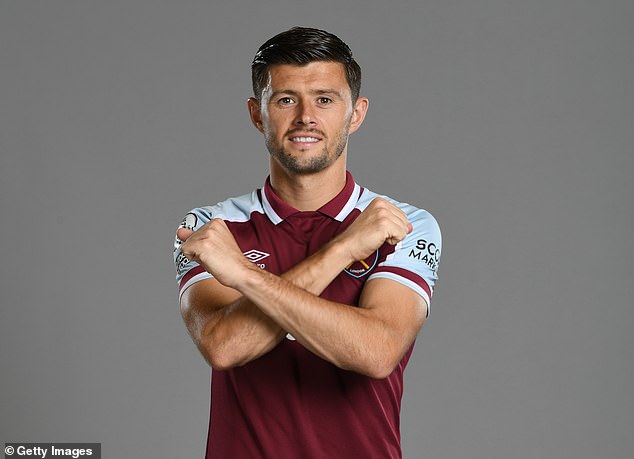 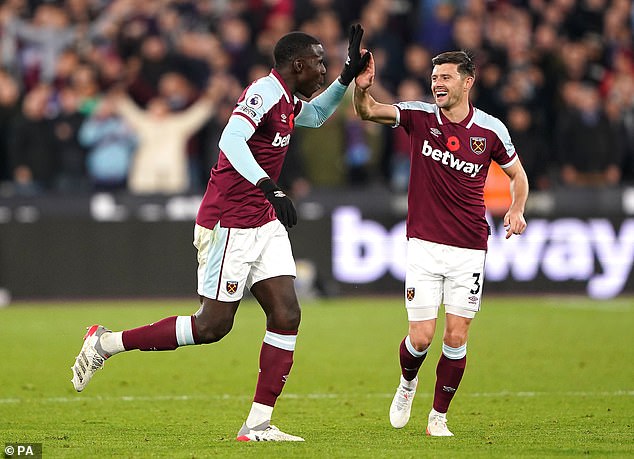 REDKNAPP: Let’s go back to the beginning. How did you get your start in football?

CRESSWELL: I grew up a Liverpool fan. I wasn’t looking too deeply into becoming a professional footballer. I wasn’t thinking this was what I wanted to do. It was more that I was playing for the enjoyment of it.

I joined Liverpool at 12, then was released at 15. I was devastated. My dad had to tell me, “You’re not going back”. It was a case of going to Sunday League, playing with my mates and just enjoying it.

REDKNAPP: It sounds like that rejection from Liverpool, as gutting as it must have been, helped you.

CRESSWELL: To get that knock-back, it was heartbreaking at the time. But it set me up. There aren’t many footballers out there who haven’t had a setback. Once you learn to deal with that disappointment, and overcome it, it makes you strong as a person and a player. Tranmere picked me up eventually, and they gave me a great platform.

CRESSWELL: I joined Ipswich at the age of 21. My girlfriend, who is my wife now, moved with me. There was an Italian restaurant over the road. Neither of us could cook at all.

We’d been so lucky with our families around, doing everything for us: cooking, cleaning, washing, everything. Then all of a sudden, we’re down the A14, five hours away. It was time to grow up. 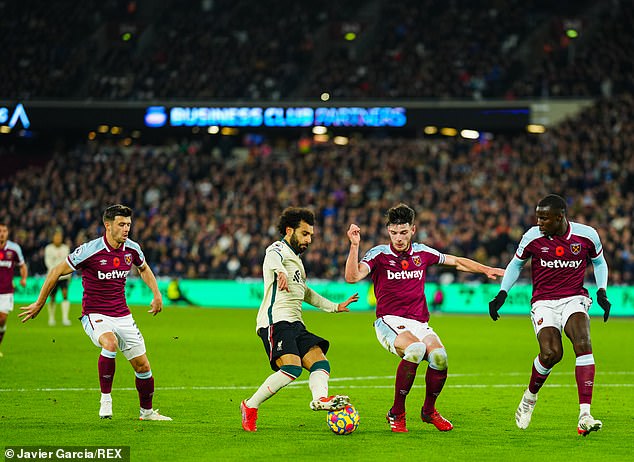 REDKNAPP: But I bet you kept that Italian in business for a while.

CRESSWELL: The man who ran it thought we were students so we were getting discounts every night! He was only charging us about £4 a meal so we’d be in there five days a week!

REDKNAPP: I bet he was fuming the first time he spotted you on television in an Ipswich shirt.

CRESSWELL: He charged me £20 the next time!

In an era when players can change clubs more than an angry golfer, Cresswell has stayed put.

CRESSWELL: I’d done three years at Ipswich and there were whispers about clubs coming in for me. That summer I came back for pre-season, and Mick McCarthy asked, “Have you spoken to your agent?” I said, “Not really. Why?” He said, “West Ham are in for you.” It was a perfect club for me and I haven’t looked back since. I’ve loved every minute of my time here. I’ve seen the highs and the lows, and it’s so positive right now.

REDKNAPP: In the next week, you face Wolves, Rapid Vienna and Manchester City, all away from home. I get the sense you’re feeling fearless under David Moyes now. 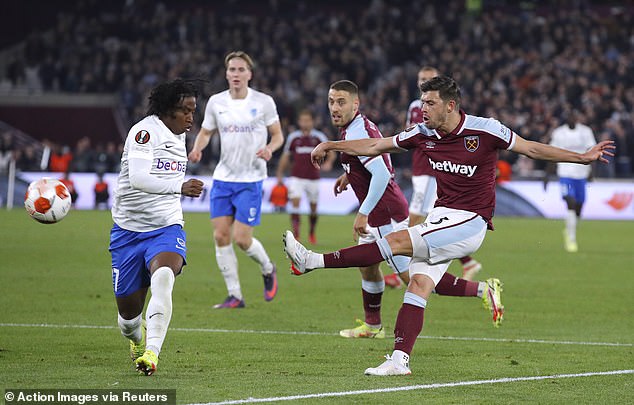 CRESSWELL: Why should we be nervous? We want to go into these games and get maximum points. It doesn’t matter who we’re up against. Why shouldn’t we be confident? We’re in a good place now and this is where we want to stay.

REDKNAPP: I talked to Noble this morning and told him that I cannot think of a more under-rated player in the Premier League right now than you. Do you feel you deserve more credit than you get?

CRESSWELL: Not really. Even with England, I don’t read into it. The squad that Gareth Southgate has got – Luke Shaw, Ben Chilwell – fantastic players. 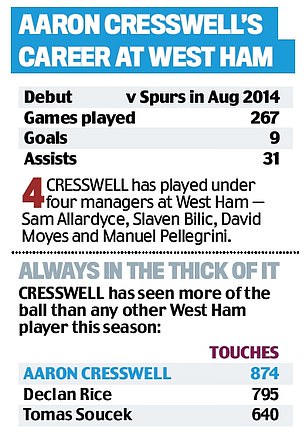 REDKNAPP: You’re only 31! You can’t tell me you’re not at their level? This isn’t me dismissing the league’s other left backs. This is me bigging you up because you deserve it! Even though every now and then you make a bad tackle…

CRESSWELL: I caught your post-match analysis on Sky Sports, don’t worry about that!

REDKNAPP: Sorry, but I wasn’t the only one who said it was a naughty tackle on Henderson! My dad said the same when I told him I was doing this interview!

But you’re a passionate player and someone who can defend as well as attack. When my dad was manager of QPR, with Joe Jordan as his assistant, I know they liked you. You’re at the top of your game now. I really don’t think you get the credit you deserve.

CRESSWELL: I’ve been in England squads, in 2016, in 2017. If anything was to happen with any of the lads who are in the squad now, I’d like to think I’d have a chance of getting in. But as long as I’m giving my all for West Ham, that’s enough for me.

REDKNAPP: If I could pick any club’s dressing room to be in, it would have been yours after that 3-2 win over Liverpool. What’s it like to be in this group?

CRESSWELL: I’m sure you’ve been in dressing rooms where they have been cliques, some lads keep to themselves, sit in a certain corner, have their own tables at dinner. But with the team spirit we’ve got, if you spent a week here, you’d know what a genuine group we’ve got. We’re all fighting in the same direction. We have a laugh and a joke but then once we step over that white line, even on the training pitch, it’s game on and it’s serious.

‘Nobody grows up wanting to be a Gary Neville’, Jamie Carragher once quipped.

Now, though, being a full back is fashionable.

Part of Cresswell’s job is to provide the crosses for Tomas Soucek, Craig Dawson, Issa Diop, Declan Rice and Co to attack.

Since Moyes became West Ham manager, no Premier League side have scored from more set-pieces. 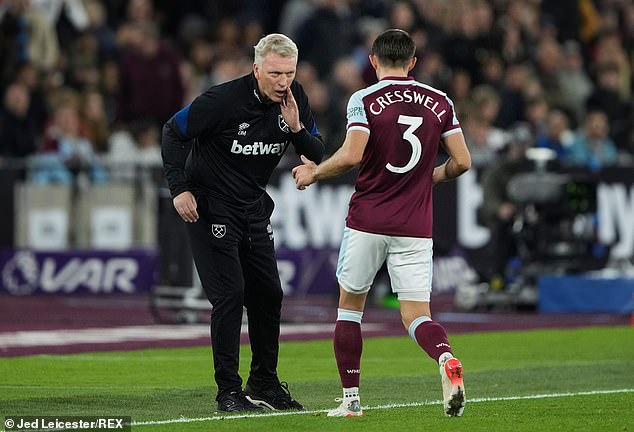 REDKNAPP: You’re much more than a set-piece specialist, but you must practise?

CRESSWELL: If you’ve got four or five 6ft 5in lads willing to head the ball, and you’ve got the right delivery, then that’s a great combination. We work on it every Friday, both defending and attacking. It’s about the togetherness, and that shows on the pitch. We’re all behind each other and ready to go.

REDKNAPP: You have a manager you trust, too.

CRESSWELL: If you’d said to me, going up against Liverpool, you’re going to go expansive and try to beat them at their own game, then there would be only one winner. With all due respect, that’s what happened to Manchester United.

The gaffer’s tactics in each game have been spot on. We’ve got variety. Whether we need to go in behind to Michail Antonio, or play through the lines, or how Declan Rice drives the team on, or get goals from set pieces.

REDKNAPP: You mention Rice. You’ve seen his rise from up close. How do you see him?

CRESSWELL: I know I play with him so I’m not going to sit here and say otherwise, but he is unbelievable. I remember a pre-season game, against Rubin Kazan in 2016. Slaven Bilic was manager and he brought on this 17-year-old called Declan Rice. I remember him giving the ball away for a goal. How did he react? From the off, he was screaming for the ball. I was thinking, ‘Bloody hell, he’s just given a goal away’ but he was that confident, he could let it go. He wanted the ball and to take authority of the game. For someone of that age to do that was unbelievable. 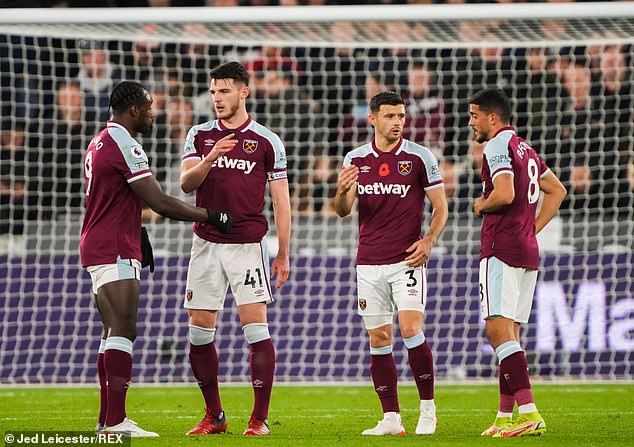 REDKNAPP: Are you in the form of your life now?

CRESSWELL: Certainly in my time here, it’s my best form, but it’s also the team’s form. That helps. Europe is where we want to be. We want to play in the best competitions, against the best players.

REDKNAPP: Upton Park was always going to be missed, but does it feel like the London Stadium is a home now? The atmosphere against Liverpool was electrifying.

CRESSWELL: It felt like the crowd was on top of you. What stood out for me were the last five, 10 minutes of that game when they really drove the team on. They’ll never know how much it helps, but it so does. We need to keep this positivity around the place.