An Asian-American teenager who was shot dead in what prosecutors previously described as a ‘classic suicide by cop’ last year had his hands up – one of them grasping a pellet gun – when troopers opened fire, newly released dashboard camera footage appears to show.

Christian Hall, a 19-year-old man of Chinese descent reportedly suffering from depression, was standing on a ledge of the southbound Route 33 overpass outside Stroudsburg, Pennsylvania, on December 30 when state troopers arrived in response to a report of a distraught man.

Hall was the one who summoned the authorities, telling a 911 operator that there was a ‘possible suicider’ on the bridge.

As seen in both the redacted version of the dashboard camera videos that were previously released by the authorities, and the unredacted version that was sent to NBC News and Spotlight PA this week by Hall’s family, responding troopers initially tried to talk the man down from the overpass, but they backed away when they saw he was armed with a gun. 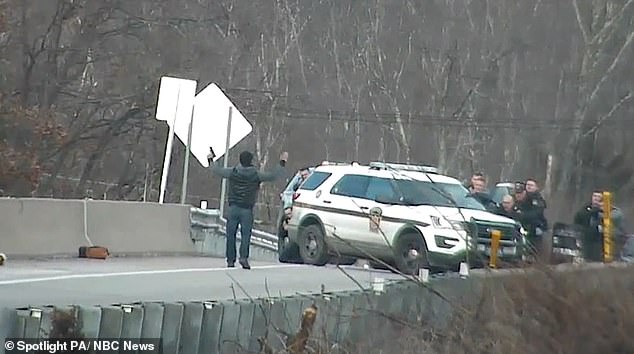 Christian Hall, a 19-year-old man of Chinese descent, was shot dead by Pennsylvania State Police troopers during a 90-minute standoff on an overpass in December 2020 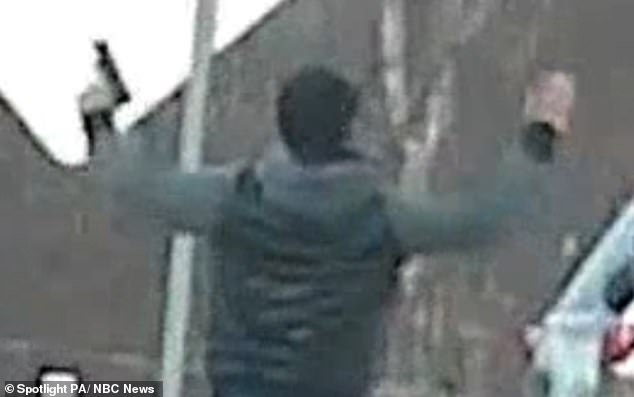 Hall was armed with a gun, which turned out to be a realist pellet gun (pictured in his left hand) 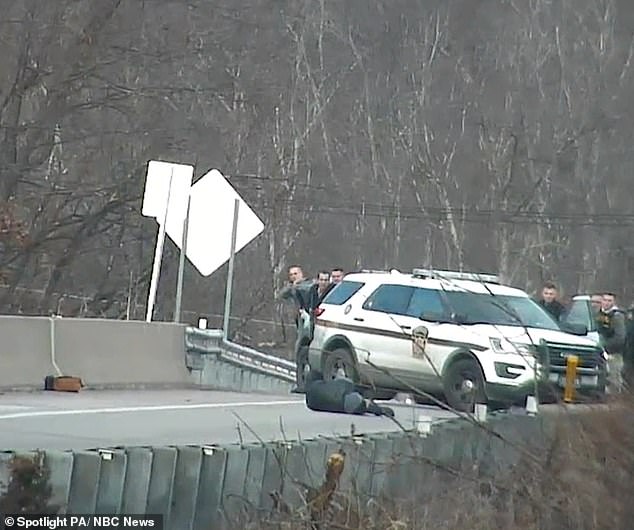 An unredacted dashcam video released this week by Hall’s family appears to show that Hall had his hands up when troopers opened fire, killing him 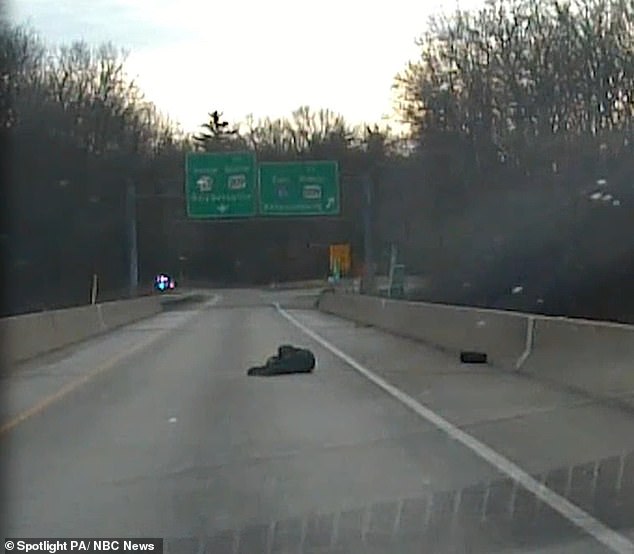 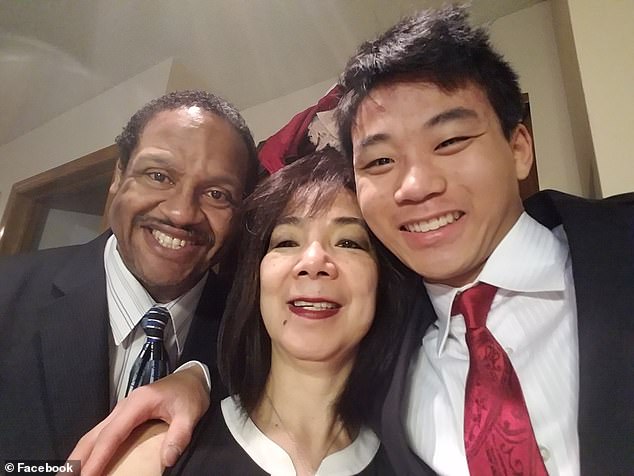 Hall’s adoptive parents, Fe and Gareth Hall, are in the process of filing a federal lawsuit against the troopers who used deadly force on the teen

As it was later determined, the realistic-looking black firearm that was in Hall’s hands was a pellet gun.

The redacted version of the video showed Hall raising his hands in the air, with his left clutching the gun, when a trooper fired the first few shots that hit the overpass.

But the final moments were blurred, obscuring Hall when he was struck by gunfire and collapsed to the ground.

The full version of the video, which attorneys representing Hall’s family have obtained from the authorities through a subpoena, appears to show that the 19-year-old had his hands raised above his head for 14 seconds during the final stage of the 90-minute standoff.

‘If he doesn’t drop it just take him,’ a voice is heard saying on the recording.

Hall’s hands were still up when troopers opened fire on him. He was struck by three rounds and died of his injuries at a hospital.

The Pennsylvania State Police stated in its press release addressing the fatal officer-involved shooting that after initially cooperating with the troopers and placing his gun on the ground, he later ‘became uncooperative and retrieved the firearm and began walking towards the troopers.’ 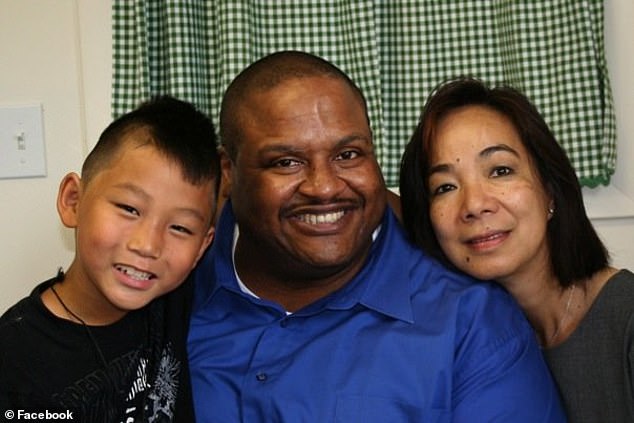 Hall (pictured as a child, left) was adopted as a baby from China. His short life was marked by mental illness and several longs stints at juvenile detention

State police claimed that the 19-year-old then pointed the gun in their direction, and they fired, but the newly released video seems to contradict the agency’s version of events.

In March of this year, the Monroe County district attorney’s office ruled that Hall’s shooting was justified.

Michael Mancuso, first assistant district attorney in Monroe County, commended troopers for showing as much restraint as they did and characterized the fatal shooting as ‘a classic “suicide by cop’ scenario.”‘

Hall told troopers that he had spent eight years in jail as a juvenile and had no intention of going back, according to Mancuso. Hall’s juvenile probation officer repeatedly tried Hall on his cellphone during the standoff, Mancuso said.

One of the troopers who communicated with Hall has a master’s degree in clinical health psychology and worked in mental health before joining the state police, according to the DA’s office. A trooper with 15 years of experience as a crisis negotiator then took over, prosecutors said. 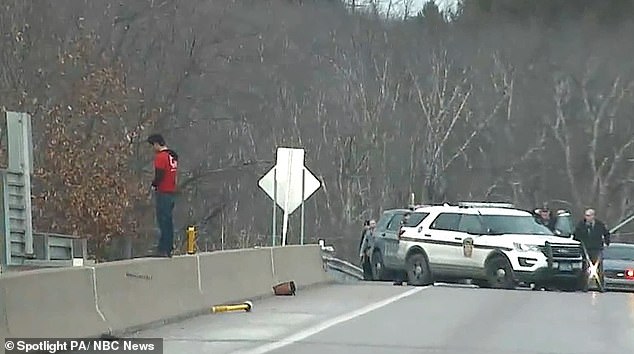 On December 30, 2020, Hall called 911 to reported a ‘possible suicider’ on the southbound Route 33 overpass outside Stroudsburg, Pennsylvania 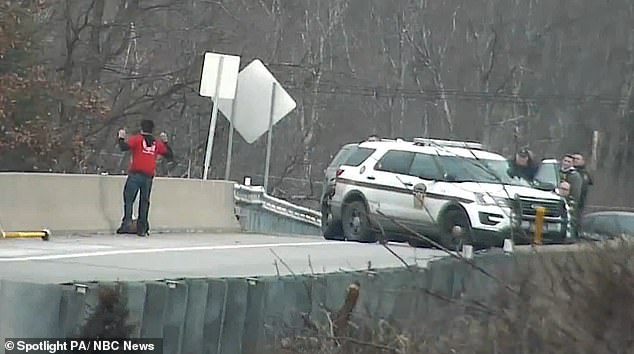 Troopers tried to talk Hall down for 90 minutes, but they back away after spotting a gun in his possession 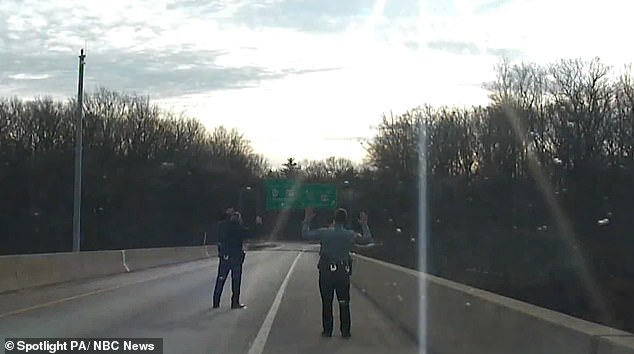 Authorities claimed that Hall became uncooperative and pointed the gun at troopers, but the unredacted video shows Hall with his hands up in his final moments

Troopers spent about 90 minutes trying to persuade Hall to give up and drop the weapon, saying ‘We are here to help you’ and offering him food, drink and a blanket. But he approached them while brandishing a pellet gun that resembled a semi-automatic pistol and they opened fire, authorities said.

Prosecutors said Hall was 70 feet from troopers at the time of the shooting.

Civil rights attorneys Ben Crump and Devon Jacob, who represented George Floyd’s family, and who are currently representing Hall’s adoptive parents, Fe and Gareth Hall, argued that troopers did not have to use lethal force on the distraught man.

‘It’s a cry for help and unfortunately, instead of getting help, Christian got bullets. Even after he put his hands up, they shot,’ Crump said during a virtual press conference in March. ‘Once you see hands go up, that’s the universal sign of surrender. So why continue to shoot and kill a person who’s putting their hands up in surrender?’

Christian was adopted from China by the Halls as a baby in 2002. As a child, he was diagnosed with a mental health disorder. 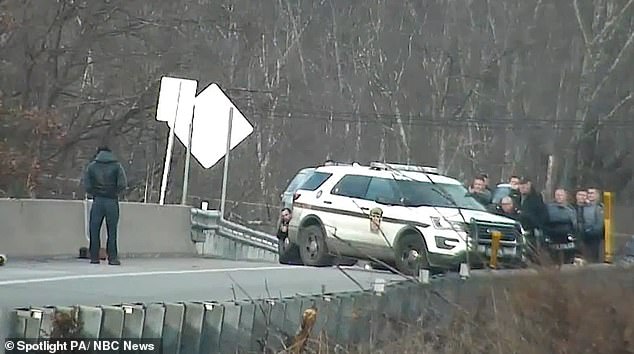 ‘If he doesn’t drop it just take him,’ a voice can be heard saying on the recording before gunfire erupts

Hall often ran away from home and at 10 ended up in juvenile detention after accidentally starting a fire while playing with matches.

After being released four years later, Hall violated his probation by running away again. He would spend the next five years going in an out of juvenile facilities.

Hall was living back with his parents in the Pocono mountains area in December 2020 when a day before New Year’s Eve, he headed to the overpass near Stroudsburg instead of going to work at a local grocery store.

The family are preparing a federal civil rights suit against the state troopers who fired the fatal shots. 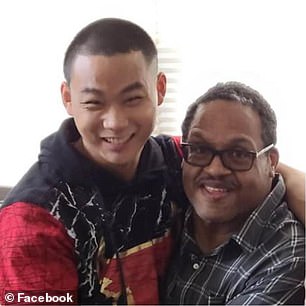 Lawyers for the family contended the fact that Hall had his hands up while holding the gun meant he did not present an immediate threat that would have justified the use of deadly force.

‘At the moment the officers decided to use force, the way in which he presented with his hands up, gun pointed in the air, not moving, there was no deadly threat at that moment — especially at 70 feet — that required that he be shot, let alone killed,’ Jacob said.

He asserted the use-of-force investigation should have been conducted by the state attorney general’s office, saying the Monroe County DA’s office had shown bias in its probe. Jacob also said troopers could have used less-lethal means to neutralize Hall.

Mancuso, the Monroe County prosecutor, told The Associated Press earlier this year that his office stands by the results of its investigation.

‘The attorney’s new claims and basis for challenging the findings of my office are no doubt of a desperate character in an attempt to regain the credibility he lost as a result of his false narrative over the last few months,’ Mancuso said in an email. 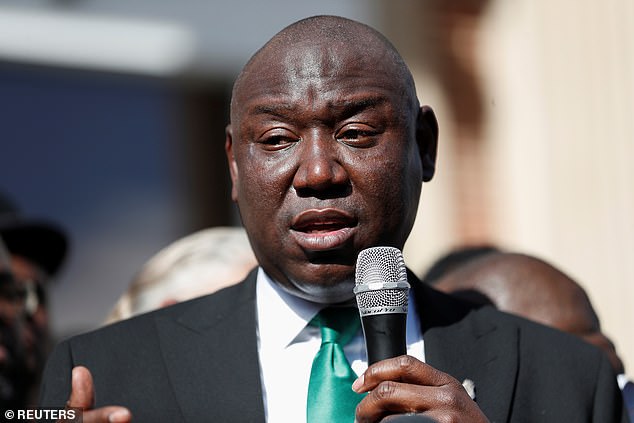 On Wednesday, the office of Monroe County District Attorney E. David Christine Jr released a statement to NBC and Spotlight PA, standing by its conclusion that Hall’s shooting was justified.

Fe Hall, Christian’s mother, told the outlet she believes her son’s race factored into the troopers’ decision to shoot him.

‘I feel that Asians are generalized as the quiet ones, they’re not going to fight back,’ Fe said. ‘Is it possible that when they shot Christian they were looking at him as Chinese? He doesn’t matter. His family is not going to say anything. This is just going to go away quietly.’