The jury is set to hear its eighth day of witness testimony in Ahmaud Arbery’s murder trial today after tensions flared in the Georgia court room on Monday as the defense called for a mistrial, claiming that Rev. Jesse Jackson comforting the black jogger’s weeping mother ‘tainted’ the jury.

Attorney Kevin Gough, who is representing accused William ‘Roddie’ Bryan Jr., filed a motion for mistrial Monday, alleging the atmosphere surrounding the case is impacting his client’s right to a fair trial.

‘We contend that the atmosphere for the trial, both inside and outside the courtroom, at this point, has deprived Mr Bryan of the right to a fair trial,’ he said.

Gough also claimed that there were several emotional outbursts in the courtroom, likely referencing how Arbery’s mother, Wanda Cooper-Jones, wept quietly in the gallery – with her eyes closed and head bowed – as civil rights leader Rev. Jesse Jackson comforted her while video of her son’s slaying played for the jury. 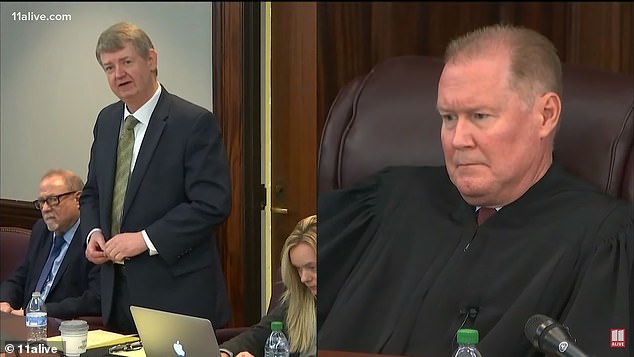 Attorney Kevin Gough filed a motion for mistrial Monday, arguing that the presence of civil rights leaders in the courtroom and ’emotional outbursts’ from Ahmaud Arbery’s mother are preventing his client from having a fair trial 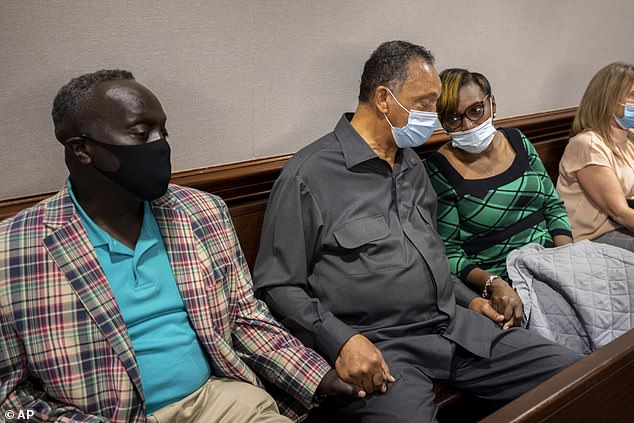 Rev. Jesse Jackson held the hands of Arbery’s parents as frame-by-frame video of his shooting was played for the jury

Before the start of Tuesday’s proceedings, a pastor responded to the defense’s commentary.

‘We stand in the spirit of reconciliation. We will not get distracted by what as taken place and what has been said from the mouth of defense attorney Kevin Gough,’ Craig Campbell, Senior Pastor at Zion Baptist Church, professed outside Brunswick Superior Court Tuesday.

‘We are pastors. We are clergy of the faith and we move when God says so. We are not standing here as a separate organization, clubs or groups. We are here as faith leaders.’

He continued: ‘We pray together and seek justice, pursuing in justice for Ahmaud Arbery with compassion…We refuse – and hear me good – we refuse to allow one man to define to us and our community. We have strived to live peacefully amongst all men in this community. Justice will flow – and it will flow from God’s heart and God’s character.’

Sharpton has said he will be joined by more than 100 black pastors at the courthouse on Thursday. 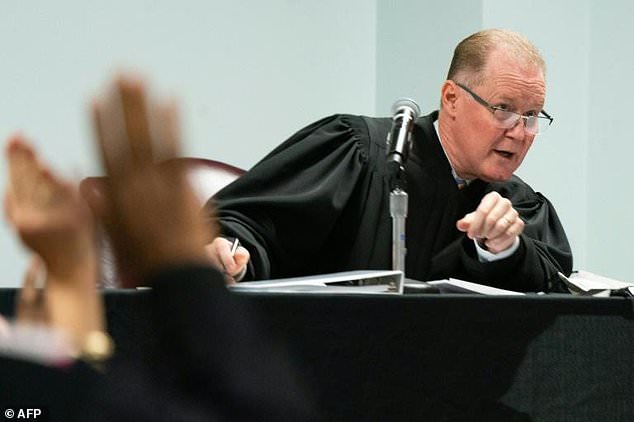 Judge Timothy Walmsley rejected the defense request for a mistrial 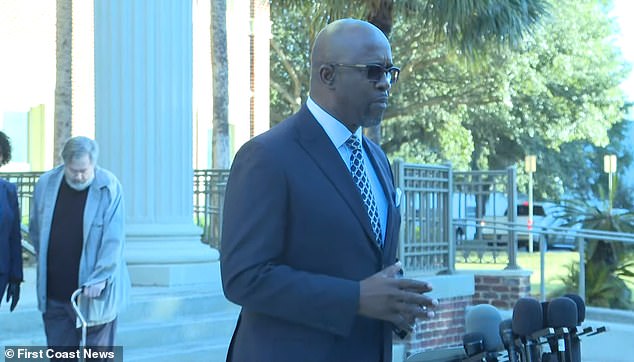 Before court resumed Tuesday morning, Pastor Craig Campbell (pictured) responded to Gough’s opposition towards the church leaders saying: ‘We will not get distracted by what as taken place and what has been said from the mouth of defense attorney Kevin Gough’

Gregory McMichael, 65, a retired police officer, his son Travis McMichael, 35, and their neighbor Bryan, 52, are on trial for murder and other charges in the February 2020 shooting of 25-year-old Ahmaud Arbery.

The McMichaels, who were armed with a shotgun and a handgun, and Bryan chased Arbery in their pickup trucks through their Georgia neighborhood of Satilla Shores and he was shot by the younger McMichael after a struggle.

The three defendants contend they believed Arbery was a burglar and have invoked a since-repealed state law that allows ordinary citizens to make arrests.

Local prosecutors, for whom Gregory McMichael had worked for a long time, did not make any arrests in Arbery’s case for nearly three months. 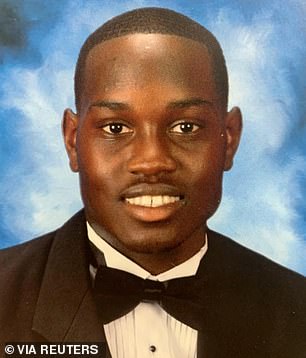 A graphic video of the shooting of the unarmed Ahmaud Arbery (pictured) went viral on social media, prompting the case to be transferred to state police and charges filed

A graphic video of the shooting of the unarmed Arbery went viral on social media, prompting the case to be transferred to state police and charges filed.

The video and weapon were presented in court Monday.

During testimony of how the 12-gage shotgun was used to kill Arbery, Georgia Bureau of Investigation Agent Brian Leppard alleged it was fired a few inches away from the jogger.

Leppard did not give a definitive distance that the gun was fired from. However, he indicated it was fired at ‘near contact’ which means a weapon was within one to two inches of the the victim.

‘The end of the shot gun was very close to that fabric when it was fired. That’s evidence by looking at the large hole there,’ Leppard told the jury.

The crime scene analyst also demonstrated how to load and fire the weapon, noting that a lever has to be removed to fire the gun. 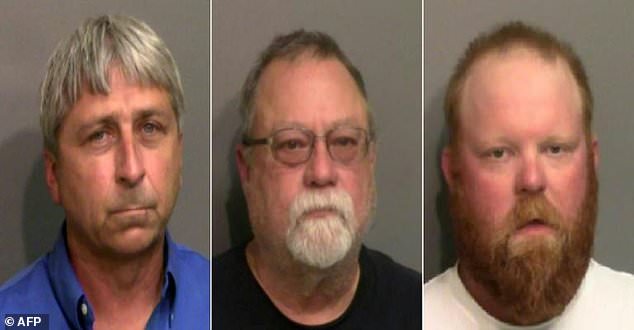 Gregory McMichael (center), a retired police officer, his son Travis McMichael (right), and their neighbor William Bryan (left), are on trial for murder and other charges in the February 2020 shooting of 25-year-old Ahmaud Arbery. 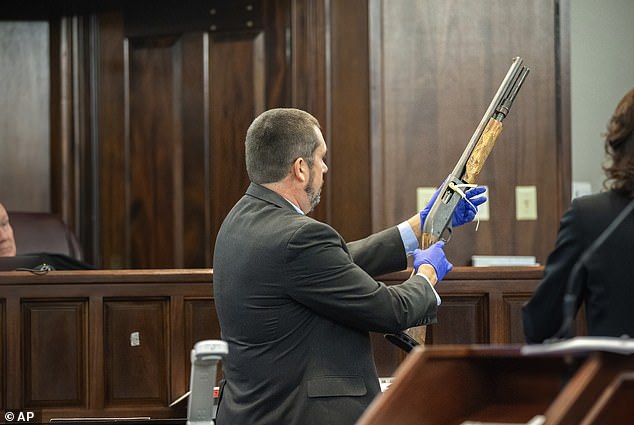 The 12-gage Remington pump shotgun that was used in Arbery’s shooting was presented in court on Monday. Firearms expert Brian Leppard (pictured) alleged it was fired a few inches away from the jogger 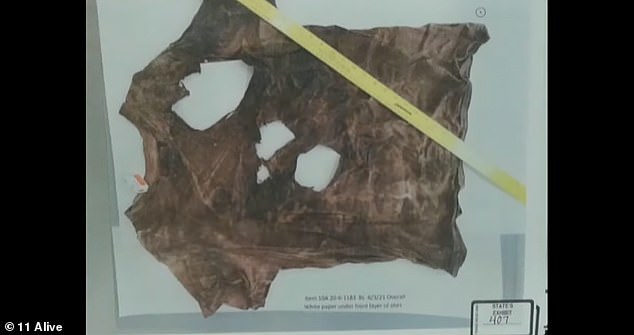 Leppard, who conducted a muzzle-to-target analysis of the evidence in June 2021, said the 4 to 5 inch holes in Arbery’s t-shirt (pictured) indicate the shotgun was in ‘near contact’ with Arbery’s shoulder and/or armpit when it was fired

Meanwhile, Georgia Bureau of Investigation Agent Jason Seacrist, who interviewed defendant Bryan on at least two occasions, returned to the witness stand Monday and was questioned by a defense lawyer about his interviews with the accused.

Gough questioned Seacrist about Bryan’s claims that Arbery tried to get into his truck during the chase. Investigators testified they found Arbery’s fingerprints on the truck near one of the door handles.

‘Is it fair to say the first identifiable crime Mr. Bryan personally witnessed that day would be Mr. Arbery trying to get in his truck?’ Gough asked.

Seacrist replied: ‘Unless you discount the fact that somebody was trying to chase Mr. Arbery down while he was legally running, jogging in the road.’

The defense began their cross-examination of Seacrist late Friday before court adjourned for the weekend. At that time, he testified that Bryan, who videotaped the Arbery pursuit from his pickup truck, had an ‘instinct’ that Arbery had committed a crime.

‘Because I figured he had done something wrong. I didn’t know for sure,’ Bryan said in a May interview with Seacrist, according to a transcript read aloud in court late Friday. ‘It was just instinct man, I don’t know. I figured he stole something.’