The American Airlines pilots’ union rejected the company’s offer of up to double pay for working holidays as the airline tries to schedule extra shifts after cancelling more than 2,700 flights in recent weeks.

The Allied Pilots Association, which represents about 14,000 pilots, voted against the premium pay of at least 150 per cent and double pay for picking up open holiday trips because it wanted to see permanent changes to how American Airline builds its schedule that has been overworking pilots.

‘While understanding that its rejection creates a disparity among our fellow workgroups that have accepted management’s proffered incentives, the board concluded that the need to achieve meaningful permanent improvements in a new collective bargaining agreement must remain APA’s focus,’ the union leadership said in a statement on Tuesday night. 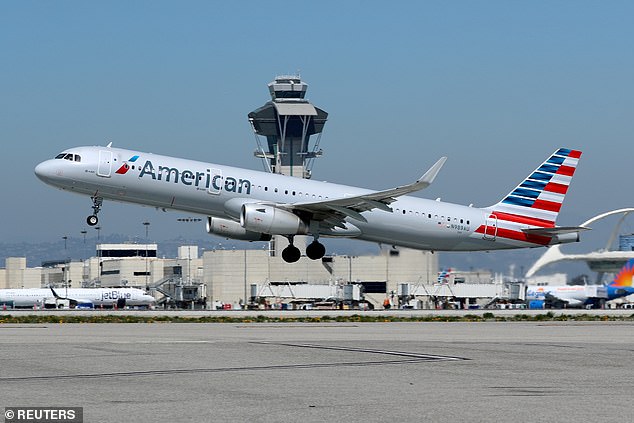 The Allied Pilots Association, which represents about 14,000 pilots at American Airlines, rejected the company’s offer of as much as double pay for working holidays 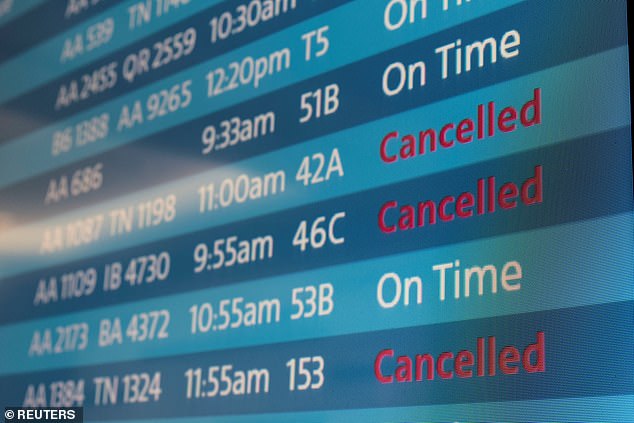 The airline continues to negotiate with employees after it had to cancel more than 2,700 flight in recent weeks due to bad weather and staffing shortages 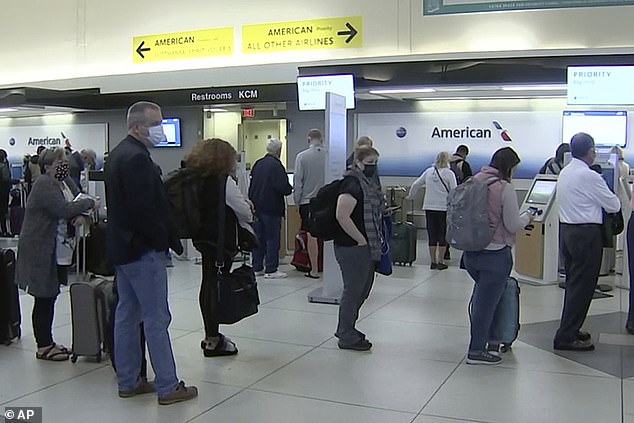 The cancelations and delays causes major back up at American Airline terminals nationwide. Pictured, customers waiting at the airport after 800 flights were canceled on Halloween

The union has repeatedly complained that the airline schedules too many flights, making it difficult for pilots to actually drop or pick up trips, CNBC reported.

They have also reported that crews face a lack of hotel rooms and transportation during the summer.

Dennis Tajer, a spokesman for the APA, told CNBC that the airline’s offer for extra pay was ‘lazy’ and ‘a clear admission you mismanaged the airline.’

American Airlines has faced severe backlash in recent weeks after it canceled more than 2,700 flights over a five-day period during the Halloween weekend, which was attributed to bad weather and staffing shortages.

Tajer said that the airline could not solely blame the weather on the cancelations, and needed to admit that a flawed scheduling system caused the shortages after the Halloween storm.

‘For much too long, management is failing to meet the fundamentals of airline operations and they aren’t showing any interest in joining us to find solutions.’

The pilots had gone on strike in early September over the summer fatigue and overscheduling. 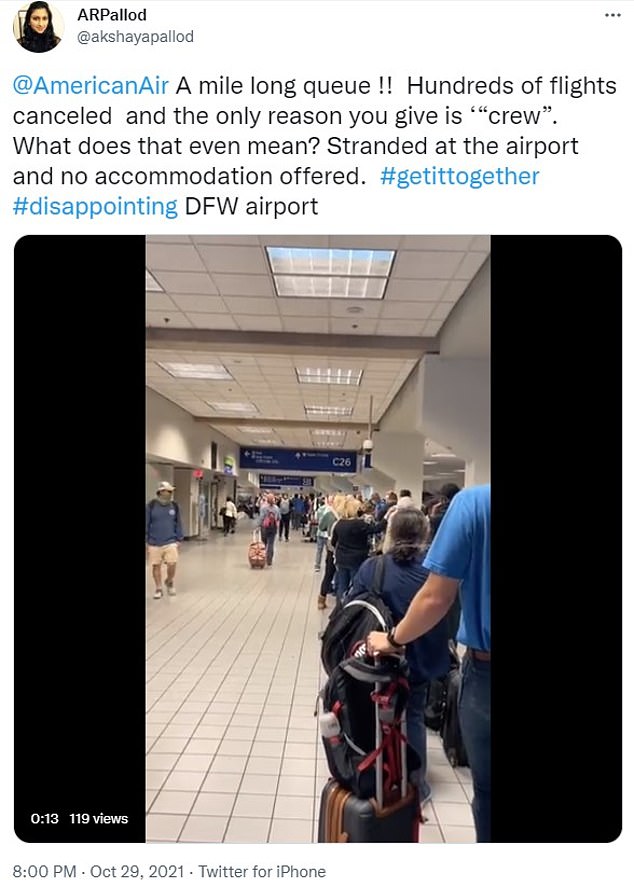 American Airlines said on Saturday it has canceled hundreds of scheduled flights over the weekend due to staff shortages and unfavorable weather conditions. The image above from Friday shows stranded passengers at Dallas-Fort Worth International Airport 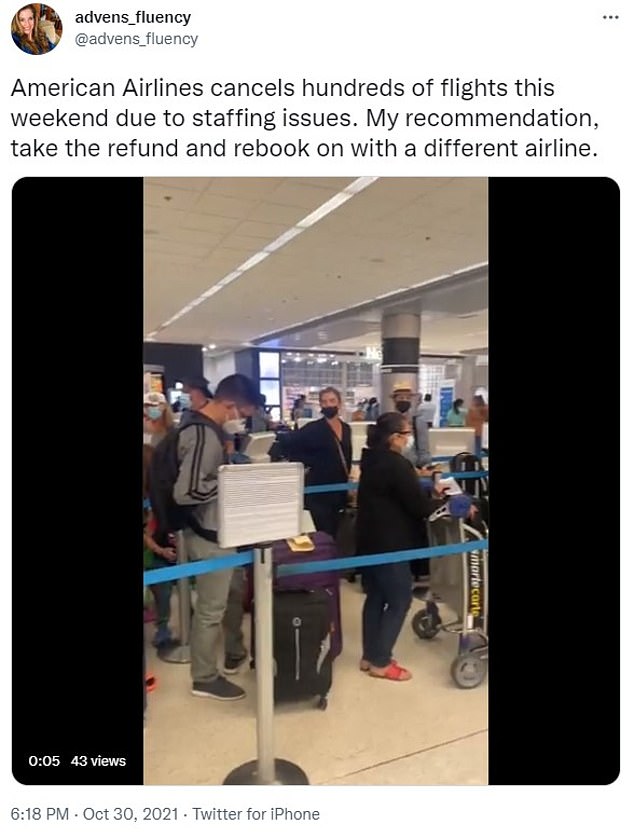 In order to avoid these disruptions for the upcoming holiday season, the airline has been negotiating deals for bonus pay for its more than 100,000 workers.

Many employees will also receive $1,000 bonuses for perfect attendance between November 23 to January 2.

American Airlines Vice Presidents of Flight Operations Kimball Stone and Chip Long said they were disappointed that the Allied Pilots Association ultimately rejected their offer while other employees have accepted the deal.

‘We will continue to look for opportunities to work with APA to support you during the holidays, as well as explore our options to maximize availability of existing premiums’ under the collective bargaining agreement,’ they wrote in a statement.

The negotiations continue as AAA predicted more than 53million Americans are going to travel for the Thanksgiving holiday, a rise in 13 percent from last year, bringing travel volume to almost pre-pandemic levels. 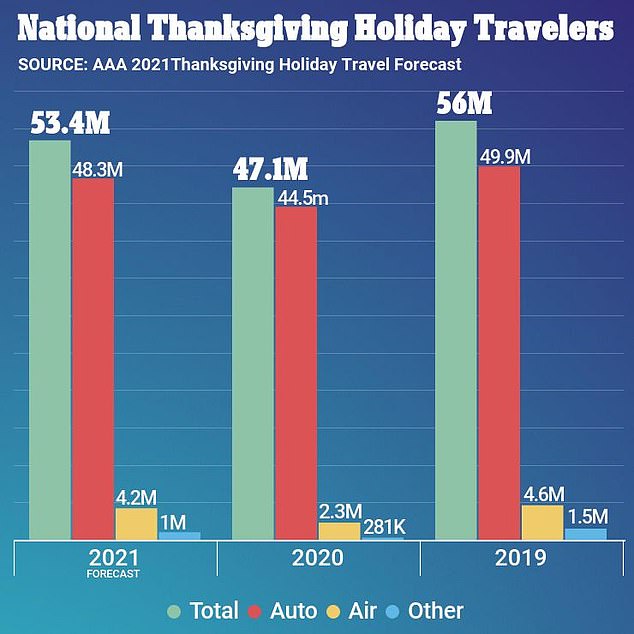 AAA predicts that more than 53 million Americans will travel for the Thanksgiving holiday, pushing travel back to just 5 percent lower than pre-pandemic levels in 2019. More than 4.2 million travelers will take to the skies this Thanksgiving holiday. This volume represents an 80 percent increase over 2020

The total travel volume is forecasted to just be 5 percent below the 2019 figure and air travel is expected to increase by 80 percent compared to 2020, bringing it to just 9 percent below 2019. This year, the Thanksgiving holiday period starts Wednesday, November 24 and lasts until Sunday, November 28.

However, with recent operational blunders at Southwest and American Airlines, plus TSA staffing issues and a dramatic price increase in airfare deals, many air travelers will be wary that things could get chaotic. About 4.2 million Americans are expected to fly this year to visit their loved ones.

‘The re-opening of the U.S. borders to international travelers means airports will be even busier than we’ve recently seen, so travelers must plan for longer lines and extra time for TSA checks,’ said Debbie Haas, Vice President of Travel for AAA – The Auto Club Group.

‘With flight delays and cancellations becoming a problem recently, air travelers are encouraged to consider travel insurance. If your flight is cancelled, there are various policies that would help offset unexpected expenses like a hotel, transportation and food. You may also receive compensation for lost luggage, or if your flight is delayed for as little as 3 hours.’