Venice flooded again on Friday as The Floating City was hit by seasonally high waters, forcing tourists to don wellington boots and waterproof shoe covers as they waded through the famous St. Mark’s square.

Scientists have blamed rising sea levels on the increasing frequency of high tides that flood the 1,600-year-old Italian lagoon city, which is also gradually sinking.

But despite the flooding, pictures today showed a number of people still exploring the famous Italian city, with some even choosing to sit at cafes while braving the shin-deep waters around their tables. 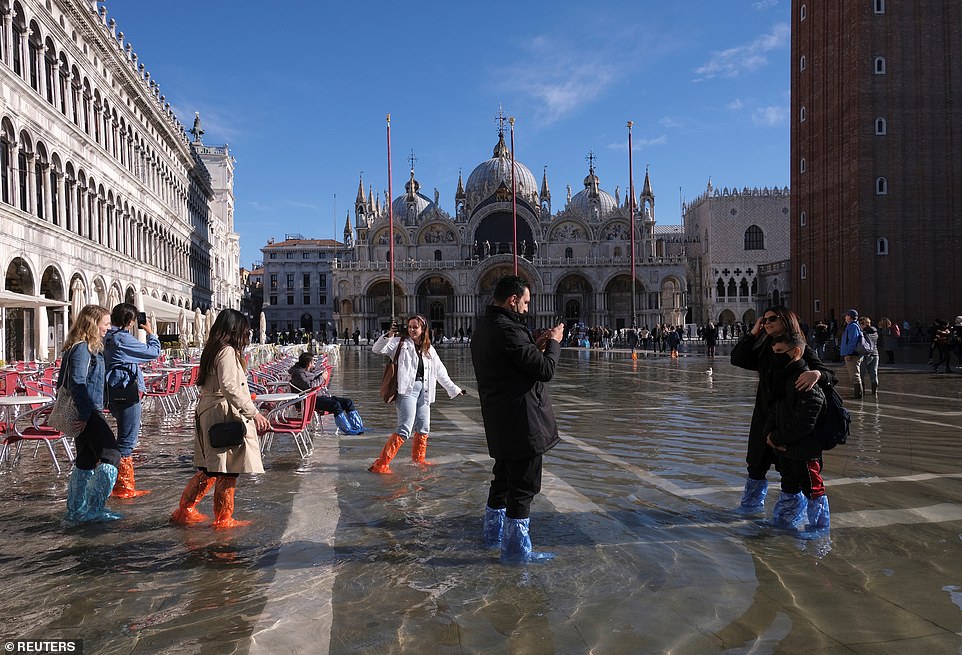 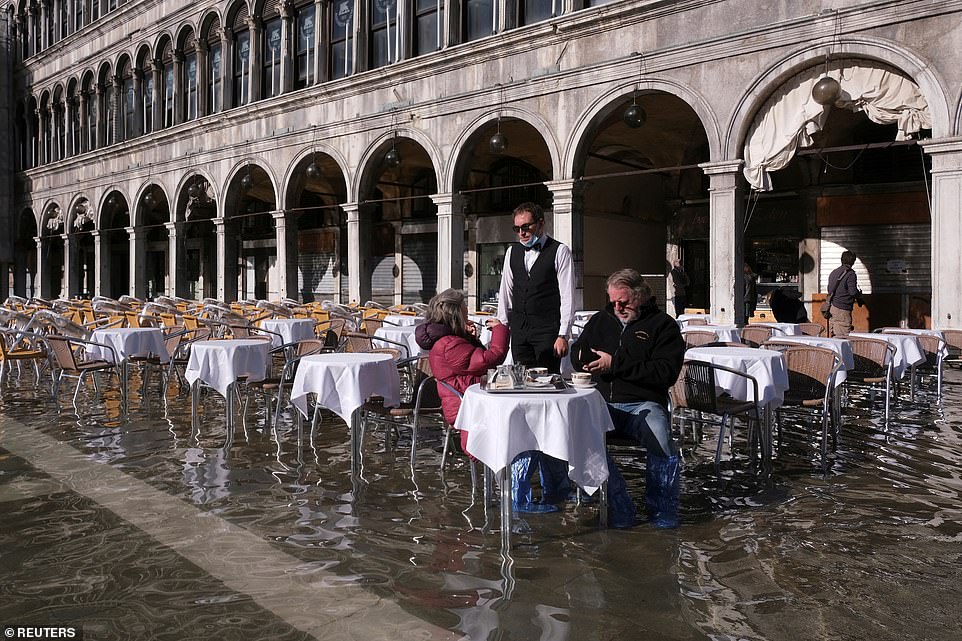 A couple sit at a cafe in a flooded St. Mark’s Square during seasonally high water in Venice, Italy November 5, 2021. Despite the shin-high waters around their table, the couple appear determined to enjoy a cup of coffee 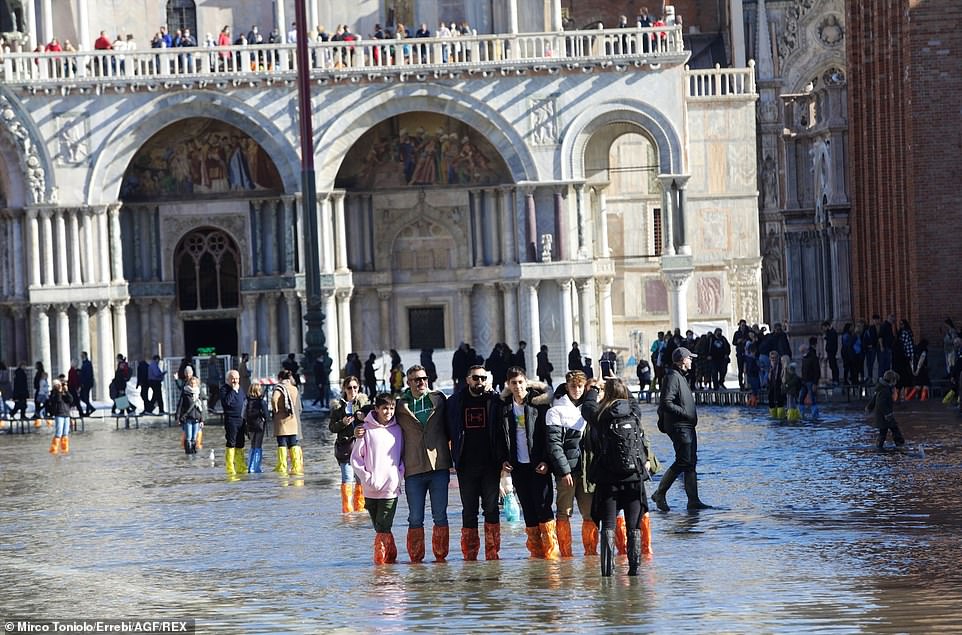 Pictured: A group of people in orange waterproof shoe protectors are seen posing for a photograph in Venice’s St. Marks square on Friday, November 5, 2021

One couple were seen seated at a cafe table being served by a waiter, and despite the water at their feet they appeared determined to enjoy their cup of coffee.

Others were seen posing in groups for photographs in the square in front St. Mark’s Basilica,which appeared to be open for tourists – some of whom were on the viewing balconies above.

Some tourists even chose to go barefoot, splashing through the water as if it was a paddling pool.

Venice is particularly vulnerable to climate change due to its unique topography of long pointed wooden poles that were driven straight down into the seafloor, along with its 117 canals that flow through the ancient city.

Venice’s worse-case scenario for sea level rise by the end of the century is a startling three feet, 11 inches, according to a study published by the European Geosciences Union last month.

That is 50 percent higher than the worse-case global sea-rise average of two feet, seven and a half inches forecast by the United Nations science panel. 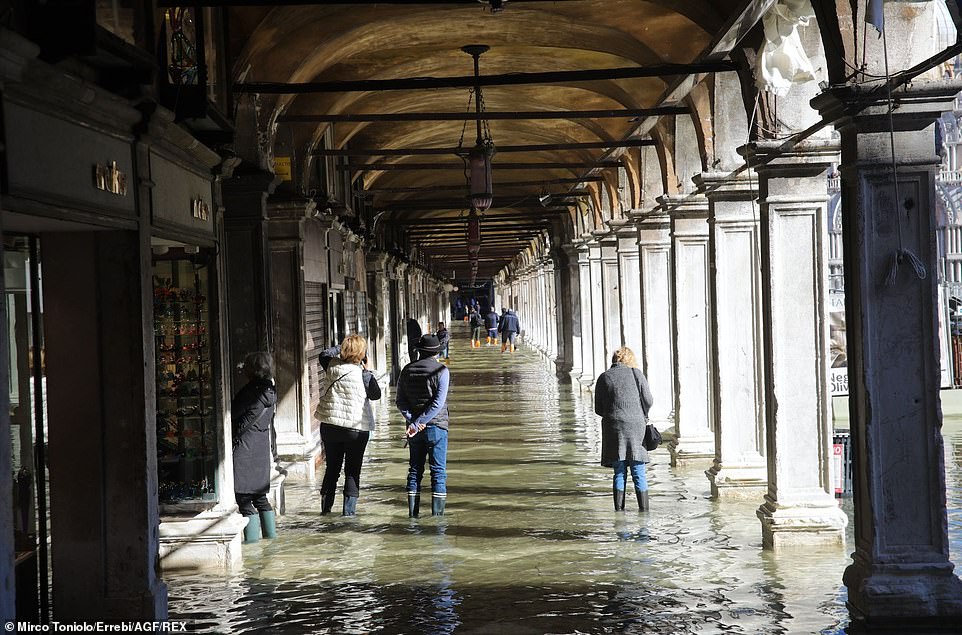 Pictured: People walk past a row of shops in Venice on Friday next to a flooded St. Mark’s square. Scientists have blamed rising sea levels on the increasing frequency of high tides that flood the 1,600-year-old Italian lagoon city 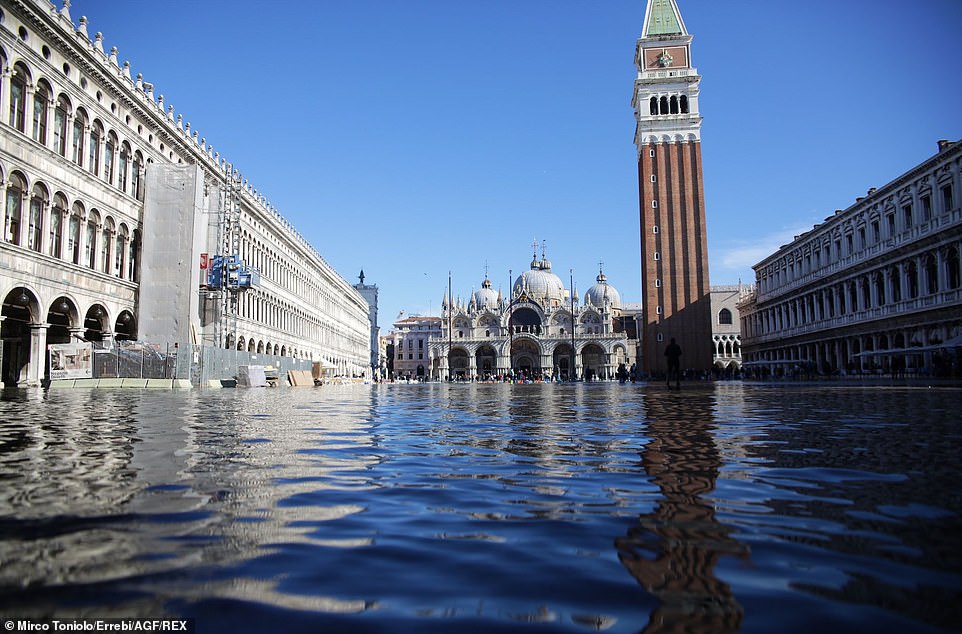 Pictured: A flood St. Mark’s square is seen on Friday, November 5, 2021. The square is in the city’s lowest point and so is now flooded frequently when Venice sees high water levels 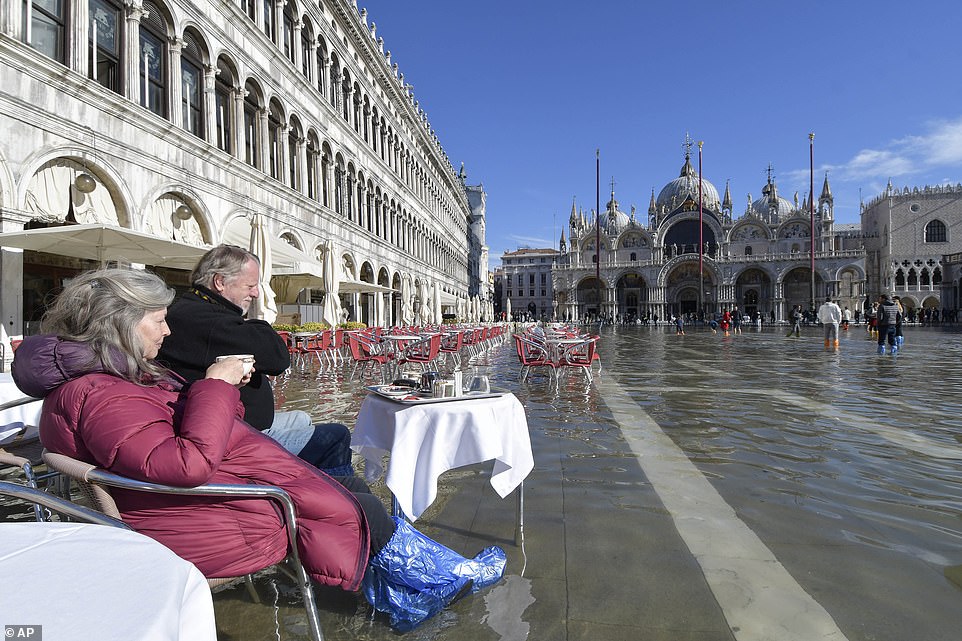 A couple sit in bar in a flooded St. Mark’s Square in Venice, Italy, Friday, November 5, 2021. After Venice suffered the second-worst flood in its history in November 2019, it was inundated with four more exceptional tides within six weeks, shocking Venetians and triggering fears about the worsening impact of climate change

It is the fate of coastal cities like Venice that will be on the minds of climate scientists and global leaders meeting in Glasgow, Scotland, at the UN climate Cop26 conference this week and next.

The city’s interplay of canals and architecture, of natural habitat and human ingenuity, has earned it recognition as a UNESCO World Heritage site for its outstanding universal value, a designation put at risk of late because of the impact of over-tourism and cruise ship traffic.

It escaped the endangered list after Italy banned cruise ships from passing through St. Mark´s Basin, but alarm bells are still ringing. 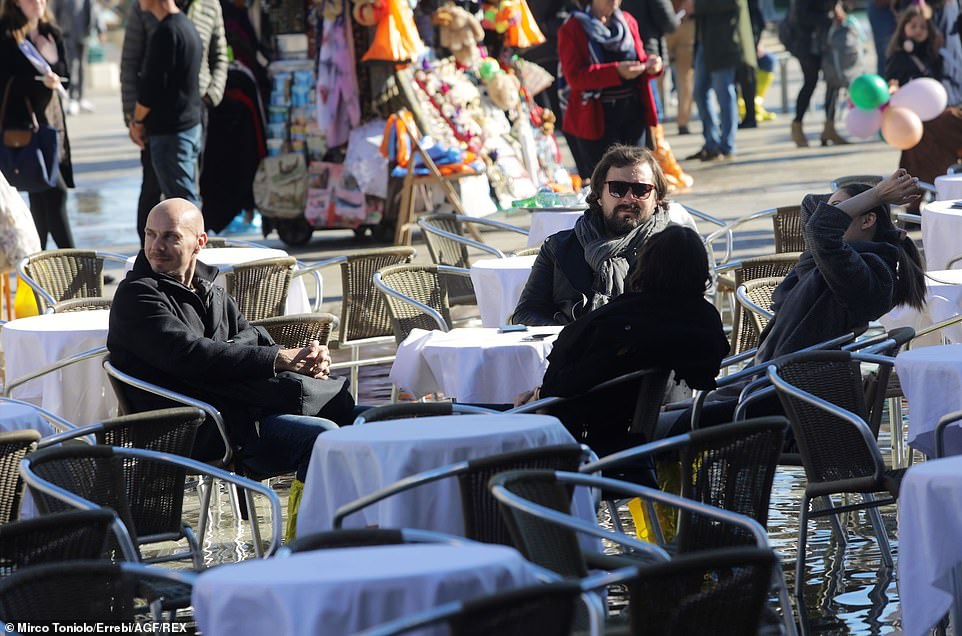 Pictured: A group sit at a cafe table, with their feet, table and chairs all in the floodwater that has covered St. Mark’s square on Friday, November 5, 2021 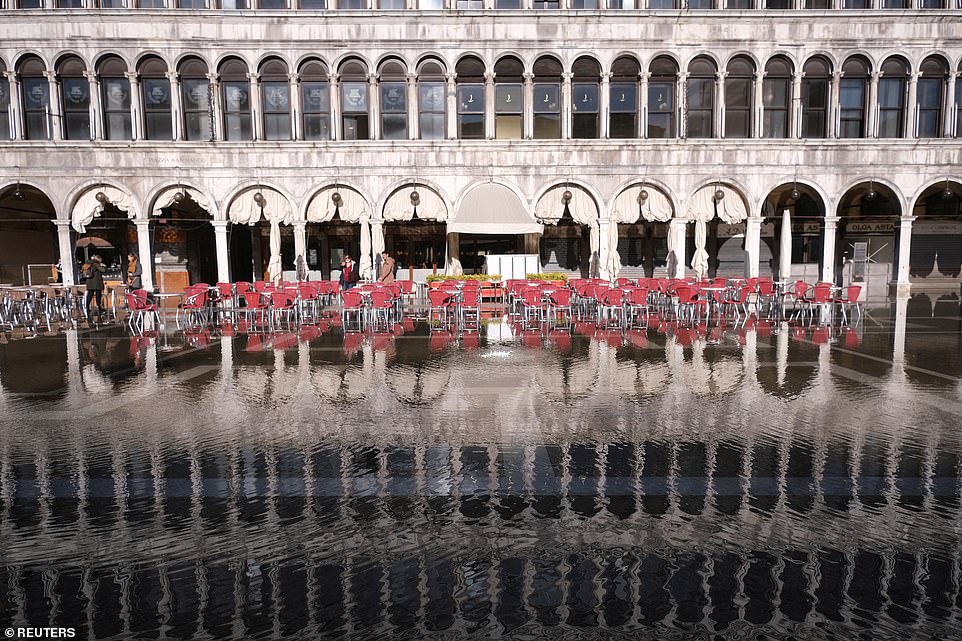 A closed bar is shown at the flooded St. Mark’s Square during seasonally high water in Venice, November 5, 2021

Sitting at Venice’s lowest spot, St. Mark’s Basilica offers a unique position to monitor the impact of rising seas on the city. The piazza outside floods at around 30 inches, and water passes the narthex into the church at 34.5 inches, which has been reinforced up from a previous 25.5 inches.

‘Conditions are continuing to worsen since the flooding of November 2019. We therefore have the certainty that in these months, flooding is no longer an occasional phenomenon. It is an everyday occurrence,’ St. Mark´s chief caretaker, Carlo Alberto Tesserin, told The Associated Press last month.

In the last two decades, there have been nearly as many inundations in Venice over three feet – the official level for ‘acqua alta,’ or ‘high water,’ provoked by tides, winds and lunar cycles – as during the previous 100 years: 163 vs. 166, according to city data.

Exceptional floods over four feet, seven inches are also accelerating – a mark has been hit 25 times since Venice starting keeping such records in 1872.

Two-thirds of those have been registered in the last 20 years, with five, or one-fifth of the total, from November 12 through December 23, 2019. 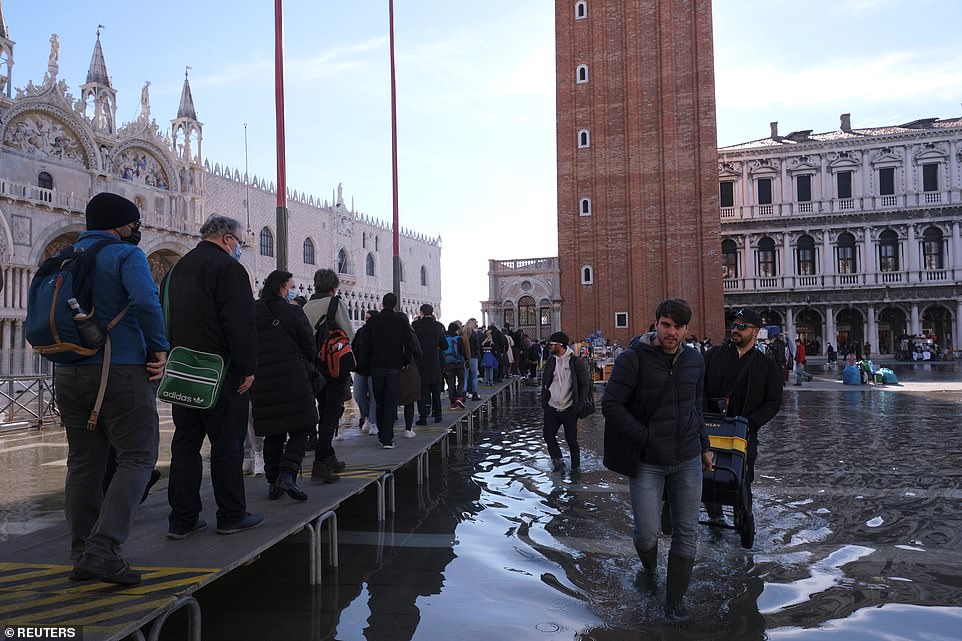 People walk on a raised catwalk at the flooded St. Mark’s Square during seasonally high water in Venice, November 5, 2021 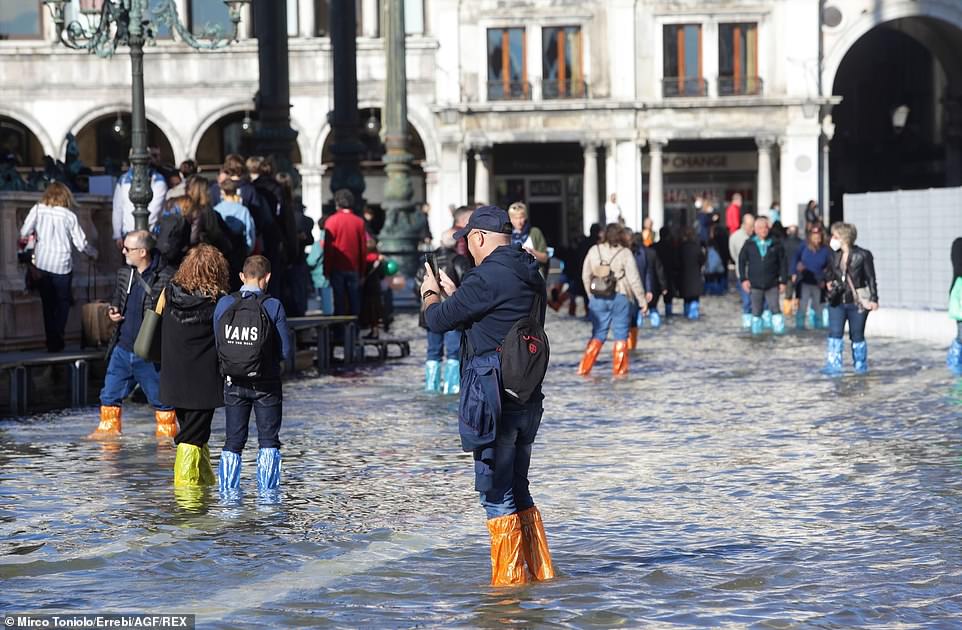 ‘What is happening now is on the continuum for Venetians, who have always lived with periodic flooding,’ said Jane Da Mosto, executive director of We Are Here Venice.

‘We are living with flooding that has become increasingly frequent, so my concern is that people haven’t really realized we are in a climate crisis.

‘We are already living it now. It is not a question of plans to deal with it in the future. We need to have solutions ready for today.’

Venice´s defense has been entrusted to the Moses system of moveable underwater barriers, a project costing around nearly $7 billion (6 billion euros) and which, after decades of cost overruns, delays and a bribery scandal, is still officially in the testing phase.

Following the devastation of the 2019 floods, the Rome government put the project under ministry control to speed its completion, and last year start activating the barriers when floods of four feet, three inches are imminent. 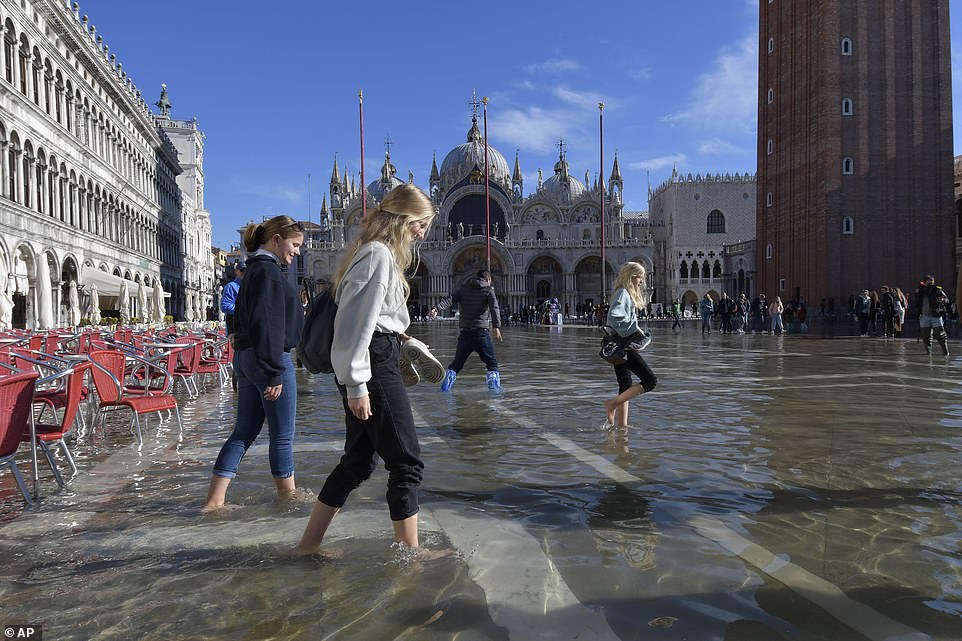 Pictured: Three women with their shoes off walk barefoot in a flooded St. Mark’s Square in Venice, Italy, Friday, Nov. 5, 2021 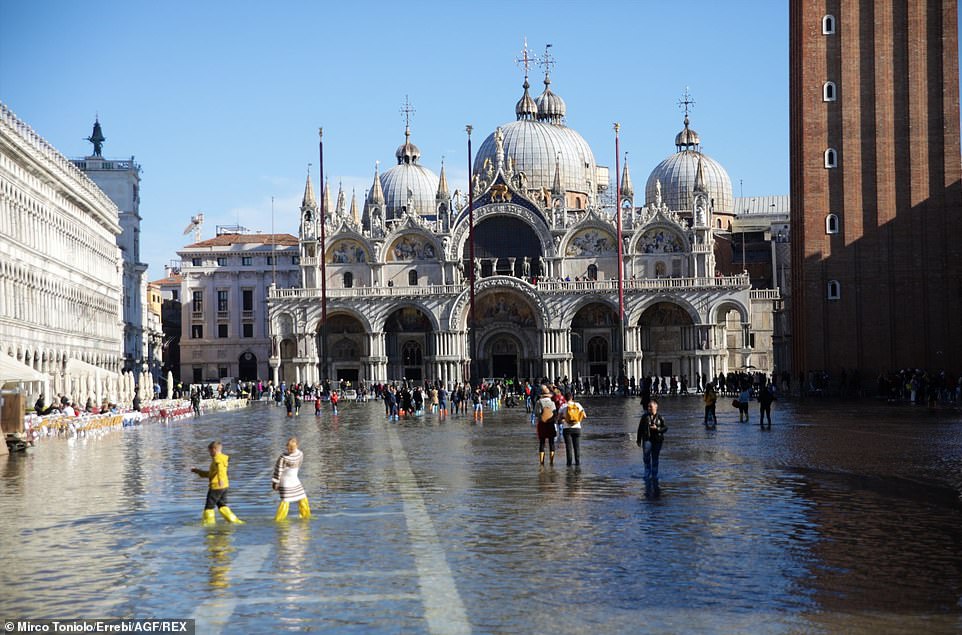 The barriers have been raised 20 times since October 2020, sparing the city a season of serious flooding but not from the lower-level tides that are becoming more frequent.

The extraordinary commissioner, Elisabetta Spitz, stood by the soundness of the undersea barriers last month, despite concerns by scientists and experts that their usefulness may be outstripped within decades because of climate change.

The project has been delayed yet again, until 2023, with another $500 million in spending, for ‘improvements’ that Spitz said will ensure its long-term efficiency.

‘We can say that the effective life of the Moses is 100 years, taking into account the necessary maintenance and interventions that will be implemented,´ Spitz said.