Businessman Stephen Clarke, 56, who had a turbulent relationship with ex-party planner Becky around 2005 — long before she married Leicester City striker Jamie Vardy, is among the witnesses who have given statements to support Coleen’s case, according to sources.

Mr Clarke was tight-lipped about his evidence when approached by MailOnline, but in the past he has vehemently denied Becky’s allegations that he abused her during their time together. 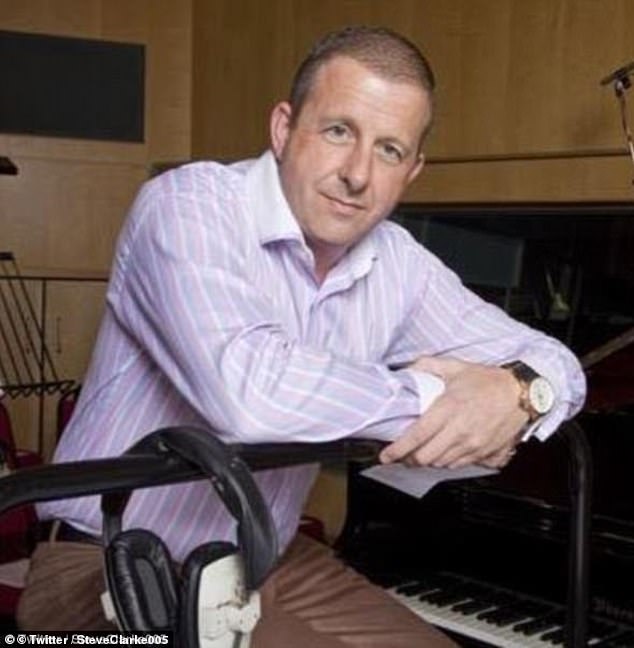 Businessman Stephen Clarke (pictured), 56, who had a turbulent relationship with ex-party planner Becky around 2005 is among the witnesses who have given statements to support Coleen’s case, according to sources

A source said: ‘Steve Clarke was Becky’s second husband and knows her as well as anyone, so if he’s called to give his evidence in court, it could be a bombshell.’

In 2017, Becky claimed in an interview with The Sun that their 10 months together when she was in her early 20s was ‘hell’.

She said: ‘I know marrying three times makes me sound like Zsa Zsa Gabor, but after a difficult childhood I made some stupid mistakes and went out with some real-life snakes!’

Becky, now 39, began dating Mr Clarke, her boss at a timeshare company, after her first marriage to Mark Godden broke down.

She said of her marriage to Mr Clarke: ‘That quickly became a horrible relationship — I was scared of him. He’d tell me what to do, where to be and how to act.

She wed Mr Clarke when she was 23 and eight months pregnant by another man. She said: ‘It was the biggest mistake of my life.’

Weeks later, she had eldest daughter Me­gan, now 16, but she has never named the father.

Mother-of-five Becky told The Sun: ‘As soon as she was born he made us move abroad. He claimed he owed money and wanted us to run away to Cyprus.

‘It went downhill from there. He became violent towards me. He cheated, he lied.

‘It lasted ten months before I escaped back to the UK with my baby after he cheated on me.’ 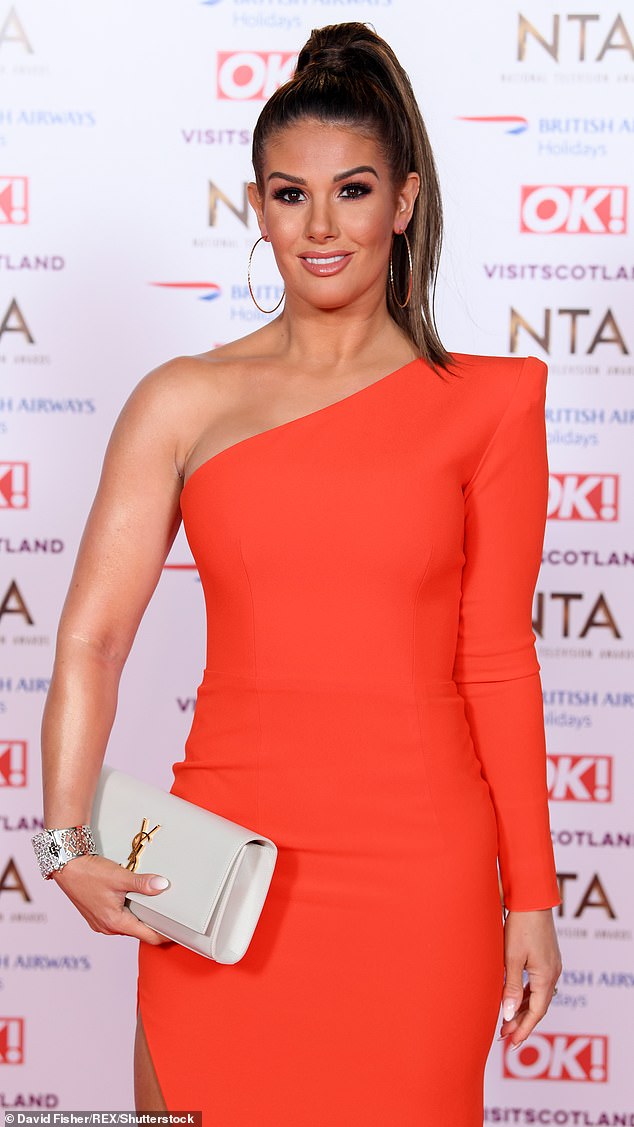 Rebekah Vardy (pictured), now 39, began dating Mr Clarke, her boss at a timeshare company, after her first marriage to Mark Godden broke down

Weeks later Clarke was sentenced to two years’ jail after his conviction for causing death by reckless driving in a head-on crash which killed a dad and grandad.

His car had steered into the opposite lane on a Paphos road.

Becky said: ‘He got his divorce papers for unreasonable behaviour while in prison. I was devastated at another failed marriage — now I realise I had a lucky escape.’

But Mr Clarke told the newspaper: ‘I was always a good husband and I never cheated on Becky or ever raised my hand to her. I am devastated two people died. It was a terrible accident.’

He also won a complaint against The Sun with press watchdog IPSO after they failed to report his denial of having ‘made’ Becky sell a kiss-and-tell story about her one-night stand with Peter Andre.

When approached by MailOnline, Mr Clarke refused to comment.

The £1m-plus High Court libel case between the warring Wags is due to take place early next year.

In August, Jamie Vardy was dragged into the legal fray after a judge ruled that his phone and computer could be searched for relevant material.

The case centres on allegations that Rebekah Vardy was leaking stories about Rooney – who is married to former England captain, now Derby County manager, Wayne Rooney – to journalists at the Sun.

The court also heard details of the enormous costs that have been run up by both sides in the case, which are on track to top more than £1m.

In a setback for Becky, a judge ruled that her husband and other individuals on her management team should have their phones and other electronic devices searched for any communication relevant to the libel case. This material would then be made available to lawyers for Coleen Rooney. 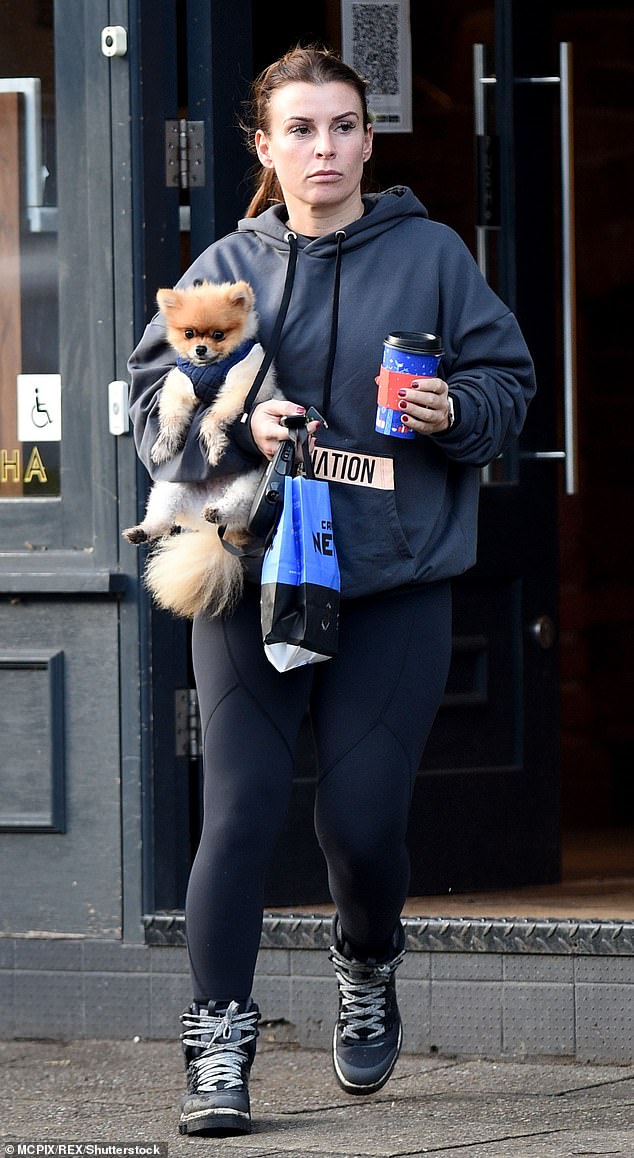 The £1m-plus High Court libel case between the warring Wags is due to take place early next year. Pictured: Coleen Rooney

Judge Roger Eastman said that owing to the ease with which Instagram messages can be forwarded – and the number of people who had access to Becky’s Instagram account – it made sense to allow third-party experts to look for related material on the devices of those closely connected to Becky.

The ruling lays open the possibility of more material about the world of football PR and celebrity journalism being exposed in court. Becky has already been warned she may have to hand over any details of conversations with journalists at the Sun.

The case began with Coleen’s sensational claim in 2019 that a series of stories in the Sun were leaked from her private Instagram account.

In an attempt to catch the perpetrator, she posted a series of fake updates on her life to the Instagram account and slowly reduced the number of people who could see it until only Becky remained.

When the stories continued to appear in the Sun, Coleen went public and posted: “It’s ????? Rebekah Vardy’s account,” prompting Becky – who strongly denies responsibility – to sue for libel.