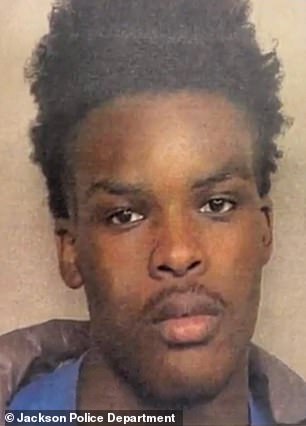 Dontarius Magee, 17, is charged with carjacking, kidnapping and aggravated assault

A Mississippi teenager was arrested after allegedly shooting his Lyft driver numerous times after he kidnapped her and took her to the woods to rob her, police said.

Brandy Littrell, 36, was shot seven times on Tuesday after picking up 17-year-old Dontarius Magee from an apartment complex in Byram, directly south of Jackson.

Magee reportedly forced Littrell into the backseat of her black Dodge Journey after hailing a ride and, holding her to gunpoint, drove her to a wooded area off Beasley Road, Jackson Deputy Chief of Police Deric Hearn said.

‘I gave him whatever he wanted because I was just trying to stay alive,’ she told 16ABC from her hospital bed.

After shooting Littrell and getting her home address, garage door opener and car keys, Magee fled the scene, police said.

Once he left, Littrell feared for the life of her grandmother, who was at her house, so she ran to a nearby apartment complex for help.

Police said they arrested the 17-year-old near Adkins Boulevard, and he has since confessed to the crime. He has been charged with carjacking, kidnapping and aggravated assault.

Magee allegedly ordered the Lyft ride and was picked up by Littrell at the Spring Lake apartments.

When they arrived at the destination Magee had set – an apartment complex off of McWillie Circle – the teenager pulled out a gun and made Littrell crawl through the woods, police said. 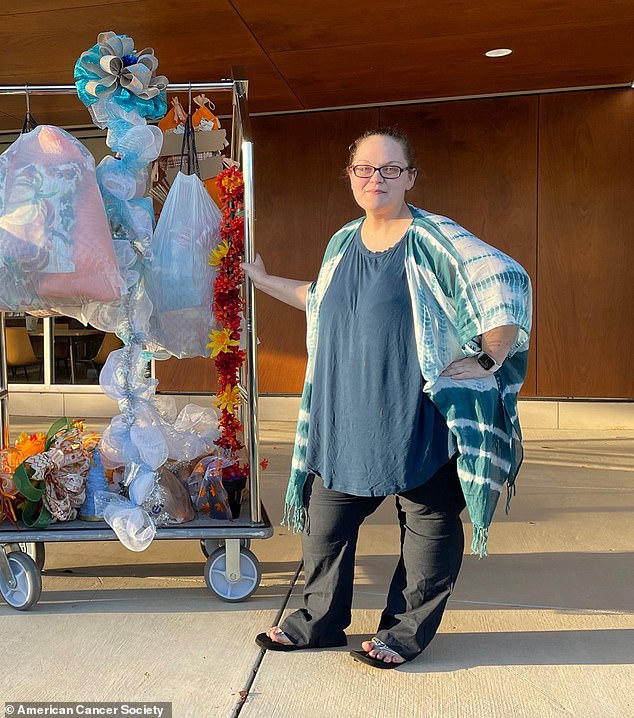 ‘I gave him whatever he wanted because I was just trying to stay alive,’ Littrell said from her hospital bed. ‘He wanted my PIN number to my phone, my debit cards, and wanted to know how much money I had in the bank, and wanted to know what was in my house.’ Above, a picture Littrell provided to abc16

Littrell said he then ordered her to ‘get on [her] knees.’

‘So, I got on my knees, and then I heard the first shot…’ she recalled of the horrific experience.

Magee shot Littrell a total of seven times while he collected the information he planned to use to steal from her, according to police.

He then fled the scene with her car keys and valuables.

Littrell, in shock and covered in blood, realized Magee had left and ran to a nearby apartment for help.

‘It took every strength in me because, at this point, I am concerned… my grandmother is at my house, and I was worried he was going to go after her,’ Littrell said.

She was rushed to the University of Mississippi Medical Center and is now recovering and alive ‘by the grace of God.’

Hearn said Magee has a criminal history of robberies of this sort.

‘It is my understanding through our interview with this individual, this is not the first time this has occurred,’ the chief said. 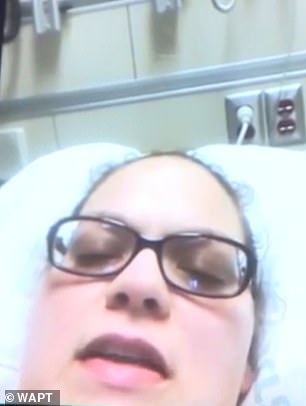 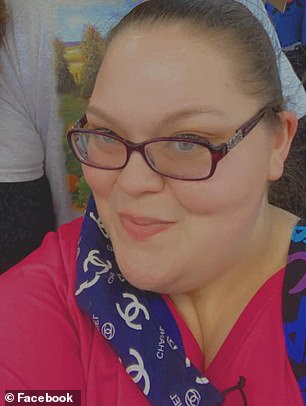 Littrell, 36, was shot seven times on Tuesday, after picking up 17-year-old Dontarius Magee from an apartment complex in Byram, Jackson 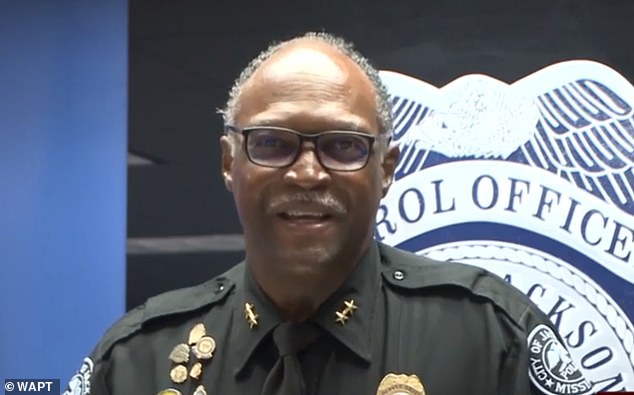 ‘It is my understanding through our interview with this individual, this is not the first time this has occurred,’ Jackson Deputy Chief of Police Deric Hearn (pictured) said

In a statement about Littrell’s incident, Lyft said: ‘The incident described is horrific and our hearts go out to Ms. Littrell and her loved ones. We’ve reached out to offer our support, have permanently removed the rider from the Lyft community, and stand ready to assist law enforcement with their investigation.’

Attacks against ride-hail drivers have been increasing at an alarming rate.

In July, The Markup reported that there had been 124 carjackings of ride-hail drivers over the last 18 months.

Eleven drivers have died as the result of the attacks. Seventy-five percent of the attacks happened after drivers were paired with their assailants through Uber and Lyft.

In August, a California Lyft driver was left with a huge gash on his forehead after a local DJ bashed him in the head with a microphone stand when he wasn’t allowed to put his equipment in the sedan’s backseat.

Lyft driver Ye Lu shared a photo of his bloodied forehead after a brutal injury that required six stiches. 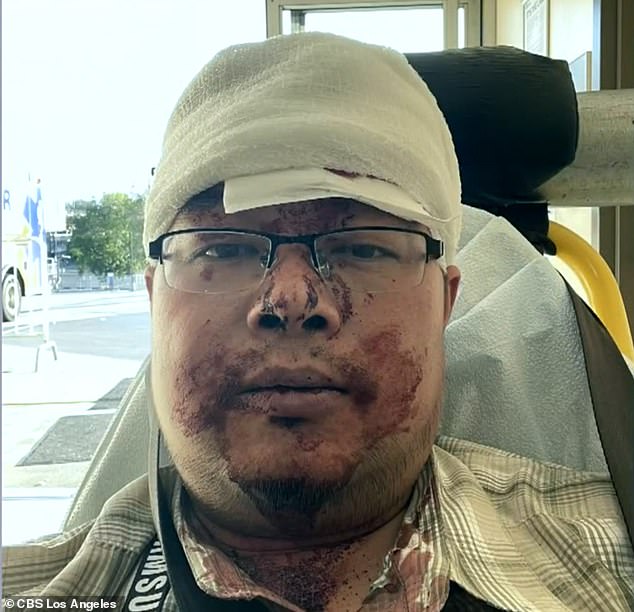 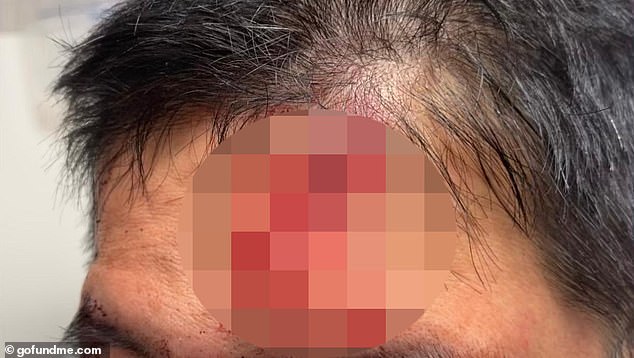 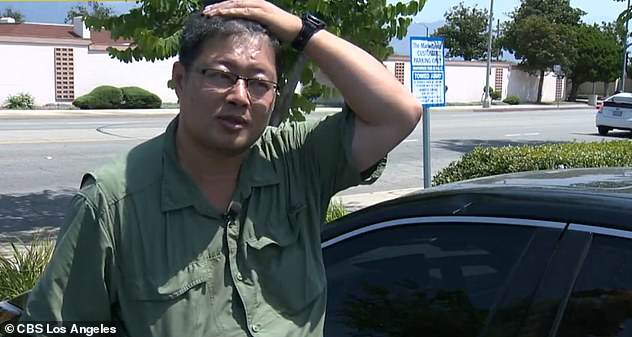 Lu told CBS Los Angeles that he was assaulted outside a bar in Jurupa Valley in the early hours of August 1 as he was picking up the passenger, identified by cops as Mark Trunko.

In March, a 19-year-old DoorDash driver in Ohio, Mihretab Sendano, had his jaw broken and his cheekbone shattered after he got confused over an address and was subsequently attacked.

Upon arriving at the initial, incorrect residence, Sendano received a threatening call from an individual who he was delivering to, demanding the driver bring him his food and accusing the delivery man of trying make off with his order.

Sendano eventually arrived at the right address, leaving the man’s food at his apartment door.

However, when Sendano attempted to drive off multiple cars appeared in front of his vehicle and cut him off – and he was attacked by a group of people.

Someone found him in the car and called 911, at which point the teen was carted off to a hospital ICU to receive surgery on his face. He also suffered a swollen eye and several cracked ribs.

DoorDash announced Wednesday that it is adding a panic button to its app to protect drivers amid a recent surge of violent crimes against them.

The announcement, in partnership with personal and home security giant ADT, comes after at least three attacks on DoorDash delivery personnel in recent months – one of them deadly. 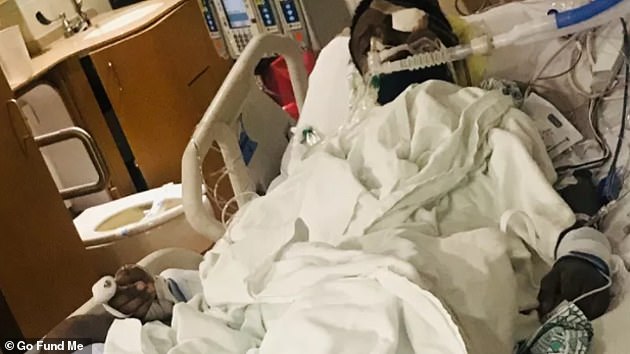 In March, a 19-year-old DoorDash driver in Ohio, Mihretab Sendano, had his jaw broken and his cheekbone shattered after he got confused over an address. DoorDash issued the following statement after the incident: ‘We are deeply horrified and saddened by this senseless, violent attack, and our thoughts remain with Mihretab and his loved ones’