A 54-year-old Idaho woman allegedly stole from the dead body of a hero mall security guard moments after she was slain while trying to protect shoppers from an unhinged gunman.

Navy veteran Jo Acker, 26, a transgender woman, was killed October 25 after confronting a gun-toting man at the Boise Towne Square Shopping Mall in what her family described as her final act of heroism.

Police said Acker was victimized a second time after a mall shopper pilfered items from her body during the ensuing frenzy.

Mary Alyce Scarbrough, 54, was charged with misdemeanor theft after stealing rings, a gun belt, and other items from Acker, according to a criminal complaint obtained by the Idaho Statesman.

A prosecutor said the items were stolen as police were actively responding to a shooting that killed two people and injured four others, the outlet reported. 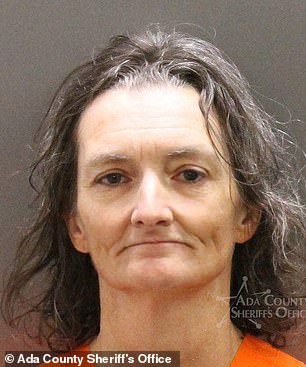 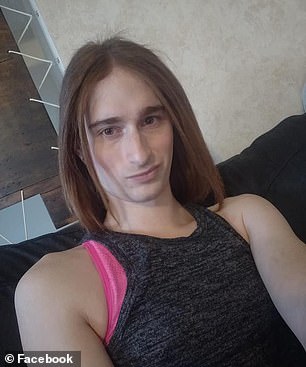 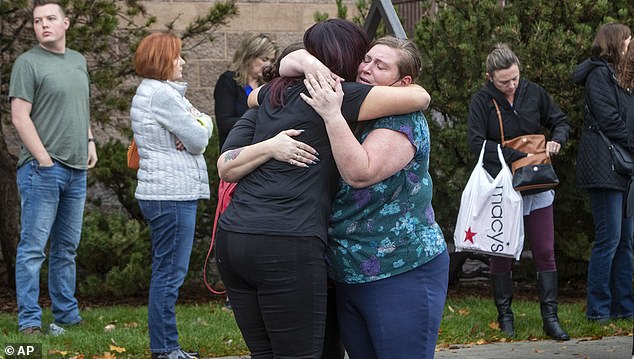 Acker, a security guard and military veteran, was among two people killed October 25 by a gunman who opened fire at the Boise Towne Square Shopping Mall 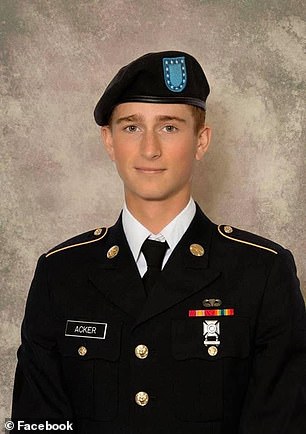 Jo Acker was a Navy veteran

Four others – including a police officer – were injured.

Ray Dawn said Acker, her partner of nearly three years, risked her own life to save others.

‘She was confronting the suspect,’ Dawn told the Idaho Statesman. ‘She was helping people be safe and get out of the way and they shot at her.

‘I was told she was helping people and saving them… I know she would have wanted a make everyone else safe. She would have been the first one to go down to confront somebody.’ 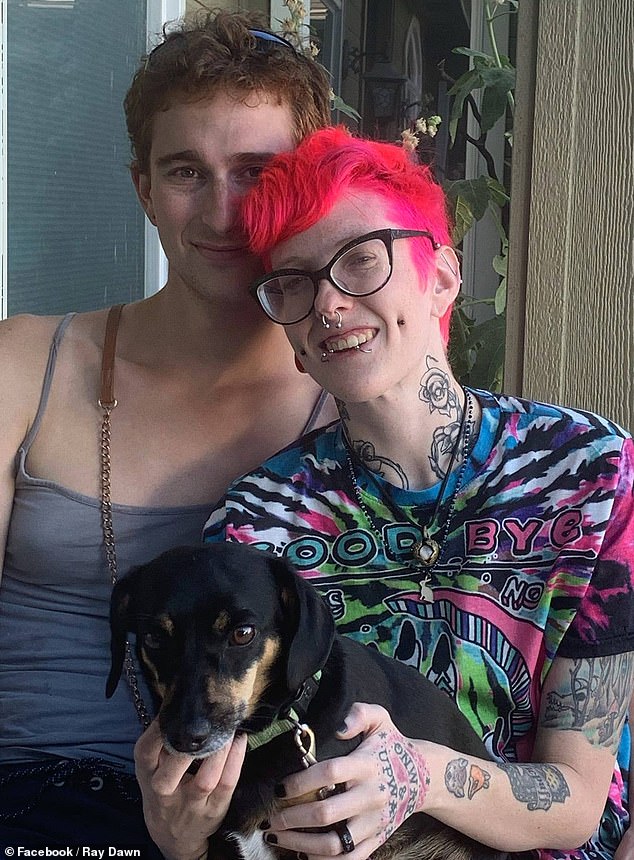 Ray Dawn (right with Acker), Acker’s partner of nearly three years, described her as ‘one of the strangest, quirkiest individuals I’ve ever known’ and added that she ‘loved her family’

Dawn described Acker as ‘one of the strangest, quirkiest individuals I’ve ever known’ and added that her partner ‘loved her family’.

‘I know that there’s different gender things, but I know that I can say she didn’t care what her family thought of that at all. She knew that she loved them and that they loved her,’ she told the outlet.

A grieving Dawn recalled how Acker also ‘talked like a ’90s mom’ because she used words like ‘goober’ and ‘adored’ her cats Sebastian and Peridot’ more than anything in the world,’ according to the Statesman.

She ‘had the palate of a 10-year-old,’ Dawn noted, adding that her lover – who she also described as a ‘proud nerd’ – enjoyed French fries and pizza more than anything else.

Video footage showed gunman Bergquist openly carrying a weapon for about 40 minutes before the shooting while he wandered through the mall and ate at the food court, police said.

Acker was shot after she approached Bergquist.

‘The suspect then continued firing as he walked,’ Boise police said in a press release. ‘One bullet hit a man’s jacket as his wife pulled him away.’ 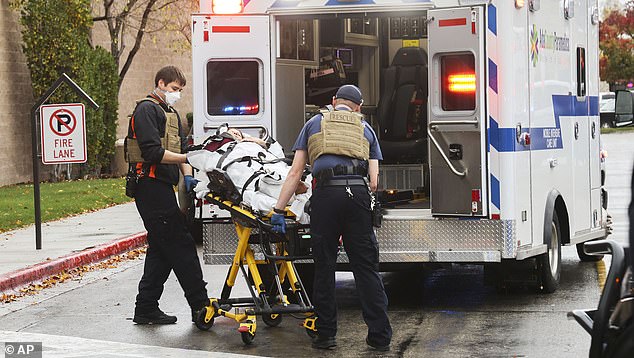 Roberto Padilla Arguelles (not pictured), 49 – who lived in Rupert, Idaho – was another victim of the tragic shooting. He was pronounced dead at the hospital 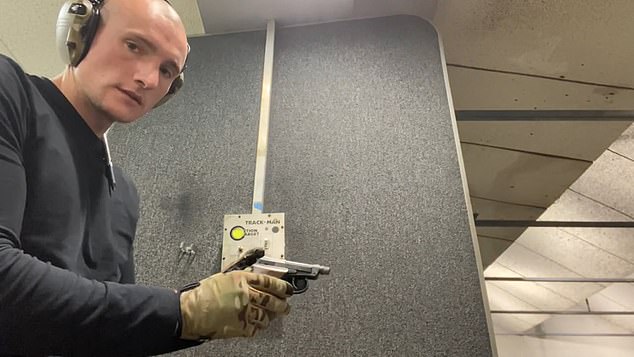 Gunman Jacob Bergquist died in hospital after being shot by police

Scarbrough is being held on $250,000 bail for an evidence-destruction, altercation or concealment charge, according to the Ada County Sheriff’s Office.

She was also charged with grand theft and malicious injury to a property although police would not elaborate on what prompted those charges.

‘Shortly after the shooting began at the mall, a woman experiencing a mental health crisis, significantly altered the crime scene by removing and displacing evidence throughout the mall,’ City of Boise spokesperson Haley Cramer told DailyMail.com.

‘She was located and arrested.’ 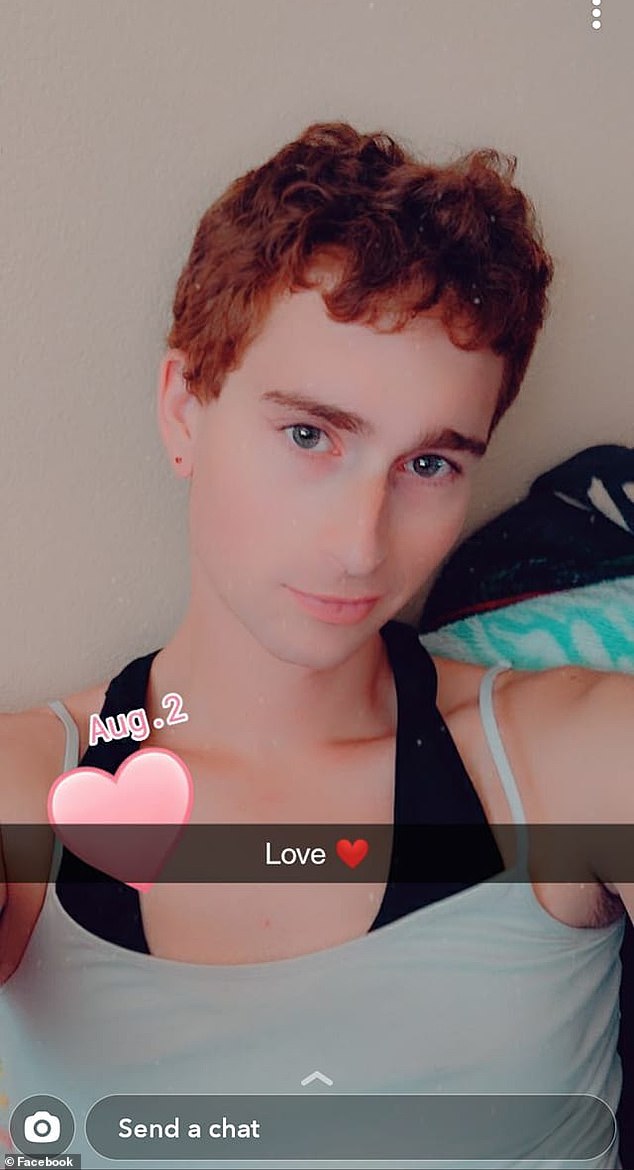 Boise police responding to the afternoon shooting were also shot at by the gunman, who struck one officer’s hat as he unloaded bullets toward the approaching cops.

The bullet penetrated a police car window, and shards of glass struck the officer resulting in non-life threatening injuries.

Bergquist was shot by police and later died in hospital. 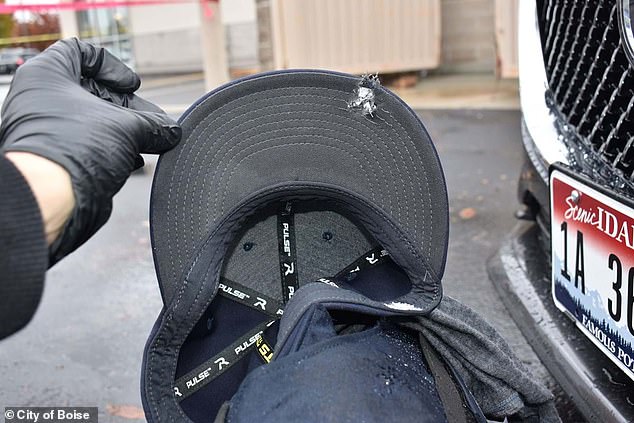 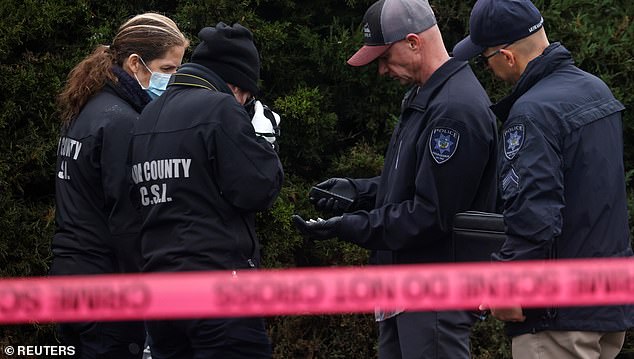 The gunman was shot by police, and later died in hospital

Acker’s sister Shawna Lee Lannigan paid tribute to her sister in a Facebook post where she described how ‘completely devastated and shattered’ she felt.

‘You were always kind and loving,’ Lannigan said. ‘You always had such an enormous heart of gold.

‘…You were and are and always will be a hero. I love you to the ends of this earth and beyond.’