Football star Henry Ruggs will be charged with felony driving under the influence resulting in death after he crashed into a car early Tuesday, killing a person inside.

The 22-year-old breakout wide receiver ‘showed signs of impairment’ after ramming his Corvette into the back of an SUV at 3.39am in the Spring Valley area of Las Vegas, according to the Las Vegas Metro Police Department.

Ruggs was taken to the University Medical Center with non-life-threatening injuries.

It’s not yet clear how the passenger of the other vehicle died.

The Alabama native is known for ‘religiously’ giving a three-finger salute to his late friend Roderic Scott after every touchdown, according to the Montgomery Advertiser. Scott lost his life in a car accident at the age of 17. 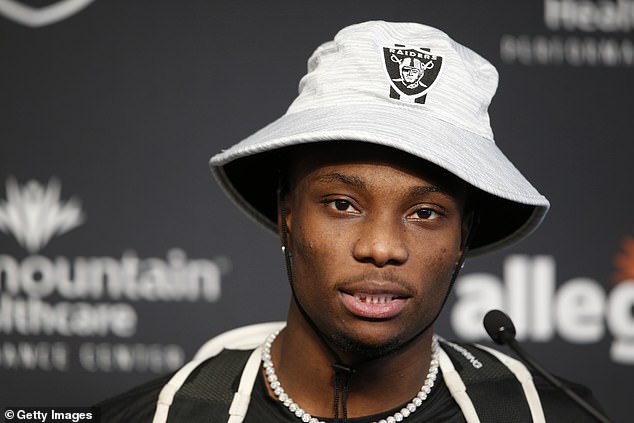 Henry Ruggs III, 22, will be charged with DUI resulting in death after a crash Tuesday morning

Police say he rammed his Corvette into an SUV that went up in flames. The person inside died

Police say they found a Toyota RAV4 in flames when they responded to the intersection of South Rainbow Blvd and South Spring Valley Pkwy at about 3.39am.

A fire crew then ‘located a deceased victim inside.’

‘The preliminary investigation indicates the front of the Chevrolet collided with the rear of the Toyota,’ the LVMPD said.

Ruggs remained on the scene but showed signs of impairment. He was transported to the hospital, but is expected to recover.

The Raiders responded to the accident in a statement provided to NFL.com: ‘The Raiders are aware of an accident involving Henry Ruggs III that occurred this morning in Las Vegas.

‘We are devastated by the loss of life and our thoughts and prayers go out to the victim’s family. We are in the process of gathering information and will have no further comment at this time.’

The football star was born in Montgomery, Alabama and attended the University of Alabama, but he chose to skip his senior year and enter the NFL draft. 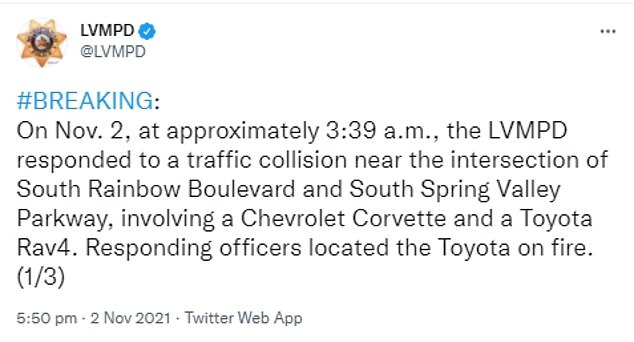 He had more than 30 Division I offers and was set to attend Florida State at one point, according to the Montgomery Advertiser.

He changed his mind at the last minute after visiting the grave of Scott, his teammate on the high school basketball team.

‘It came down to the wire. The decision was actually made on the way to the ceremony, on Signing Day morning,’ Ruggs told the paper. 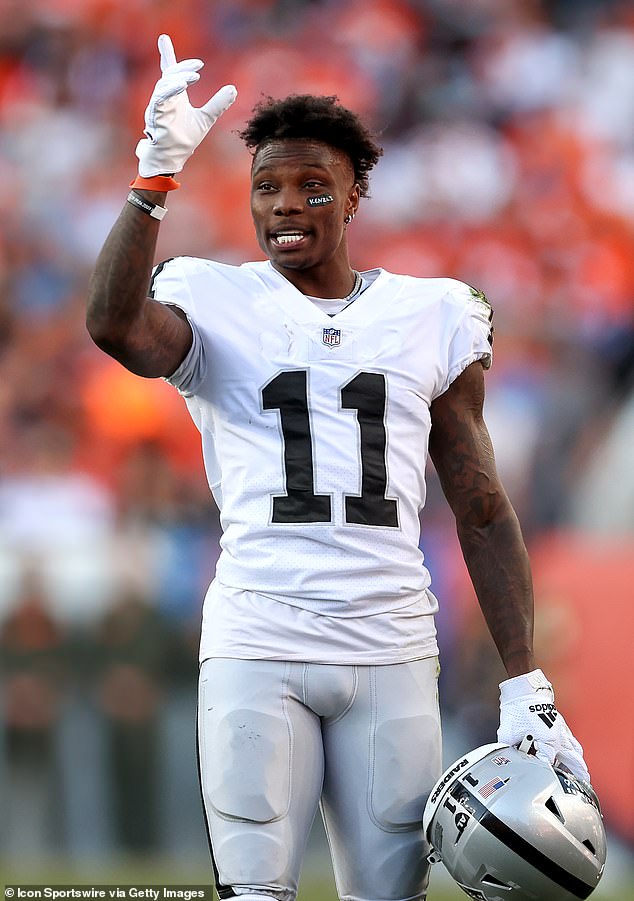 Ruggs lost his high school teammate Roderic Scott to a car accident when he was in high school. Ruggs gives a three-finger salute in honor of Scott after every touchdown

‘I mean he always told me (I’d go to Alabama), so that was kind of in the back of my head, but … it just felt like, after waking up and praying about it, I actually went to the graveyard and sat with him, and just sat and thought about it hard, and eventually (Alabama) is what came up.’

Ruggs was supposed to attend a state playoff game with Scott game on the day of his accident, but decided against it because he was sick. Scott was on his way to the game with different friends when the driver lost control in the rain.

Scott was ejected along with two other unrestrained passengers. He was pronounced dead the next day.

Ruggs was the first draft pick for the Raiders after they moved to Vegas from Oakland in 2020.