Halloween party-goers dressed up in their spookiest outfits on Saturday night as they hit pubs, bars and clubs up and down Britain, with some braving the potential of torrid weather.

Revellers in Newcastle upon Tyne in particular were in the mood for fancy dress, with pictures overnight showing a variety of extravagant costumes – from angels and devils, playboy bunnies, superheroes, minions from the ‘Despicable Me’ movies and a number of other fantastical characters.

Not to be out-done, the streets of London, Leeds, Wigan and Birmingham were among many across the UK to be filled with people in spooky costumes to rival the scenes in the northeast. 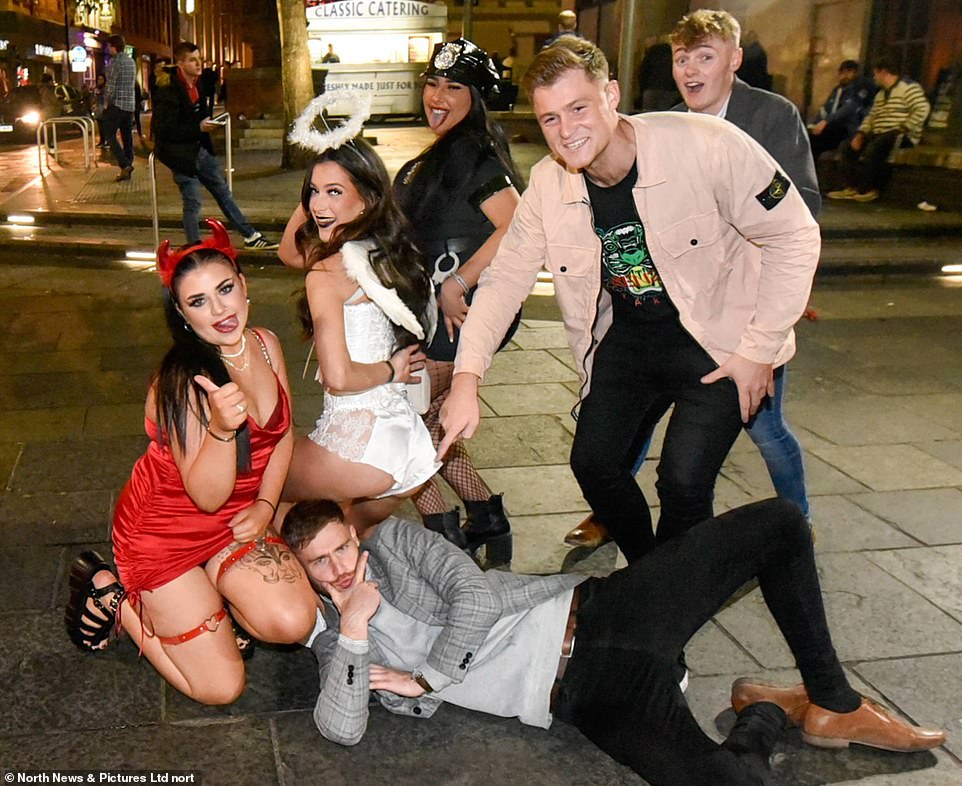 NEWCASTLE: A group of friends pose for a photograph on the streets of Newcastle upon Tyne on Saturday night as people up and down the country celebrate Halloween, despite the threat of rain and dropping temperatures 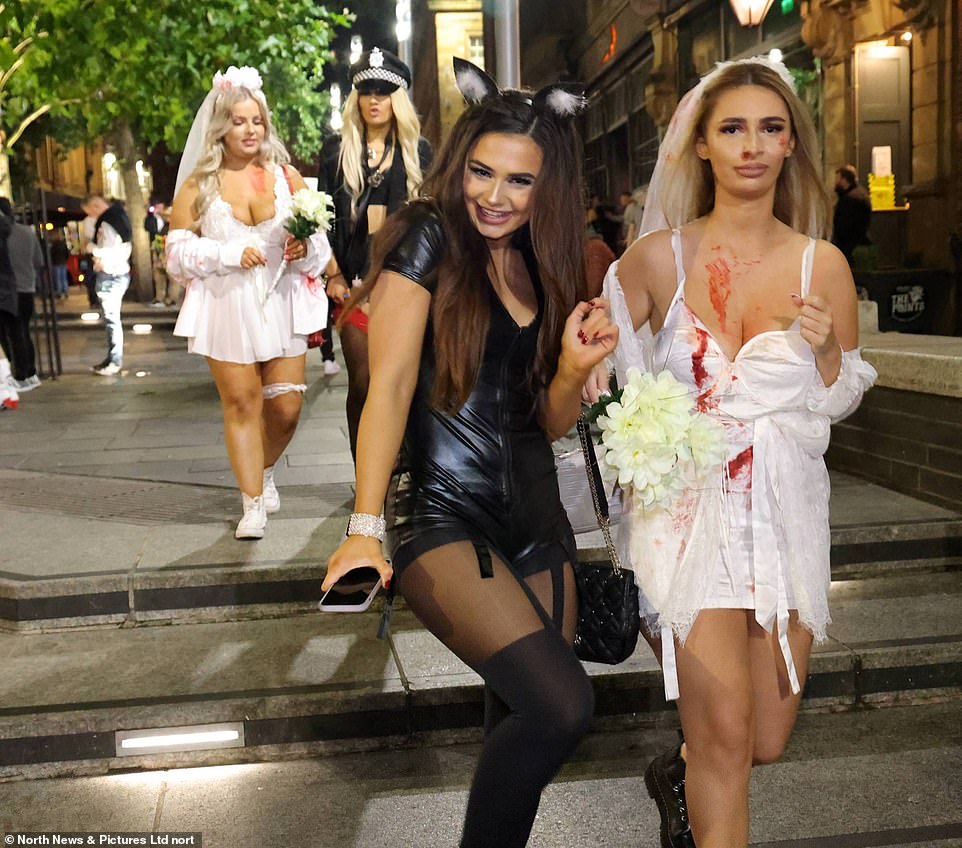 Pictured: A group of women – two dressed as corpse brides, one as a playboy bunny and another as a police officer – walk through the streets of Newcastle on Saturday night 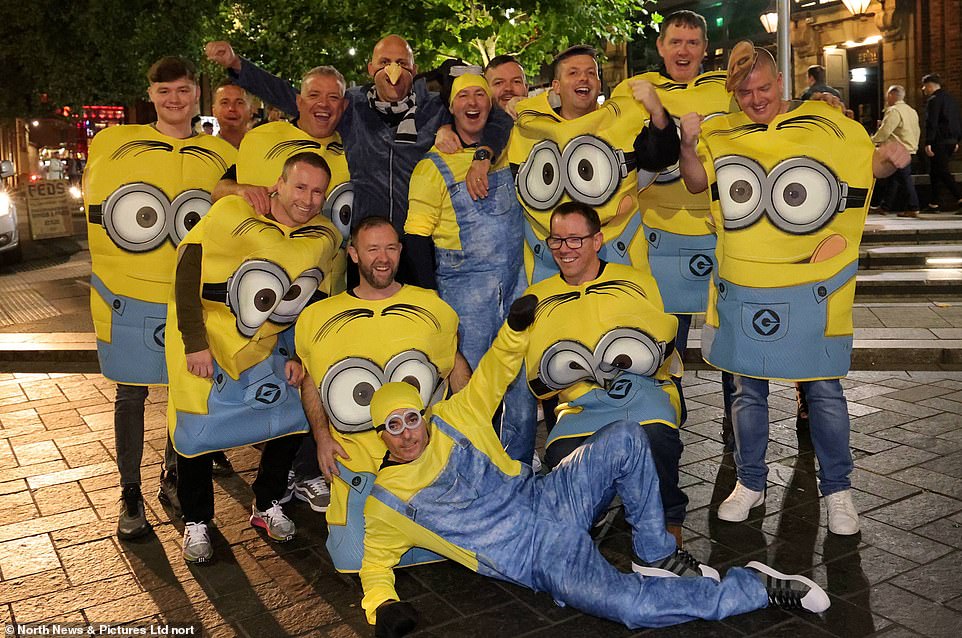 One organised group of men in Newcastle (pictured) went dressed as minions from the ‘Despicable Me’ movies, while one of them went as the criminal mastermind Gru 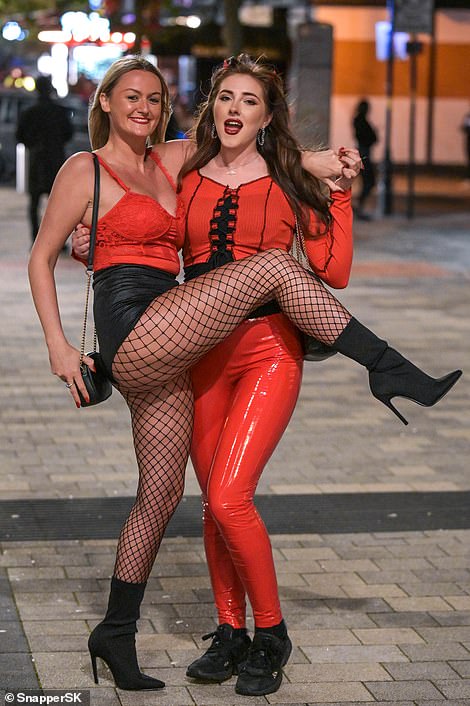 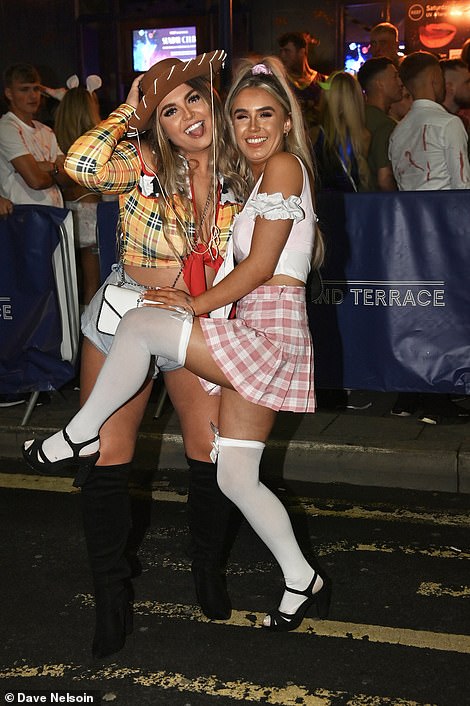 Left: Two women, one in a latex catsuit pose for a picture as thousands of revellers took to Broad Street in Birmingham on Saturday night during the Halloween weekend. Right: Two woman – one dressed as a cowgirl – pose for a photograph in Wigan

The party-goers were able to enjoy an extra hour of Halloween fun overnight as daylight savings time came to an end and the clocks went back an hour at 2am. This weekend was also the first time in two years clubs have had Halloween nights as a result of the Covid pandemic.

Pictures showed emergency services were out in force in Newcastle town centre in anticipation of people having one drink too many on one of the biggest party nights of the year, with one man pictured being handcuffed.

Many celebrating across the UK were likely to have wet and windy journeys home with the Met Office warning that strong gusts coming in from the west will bring a ‘wild start’ to Sunday. 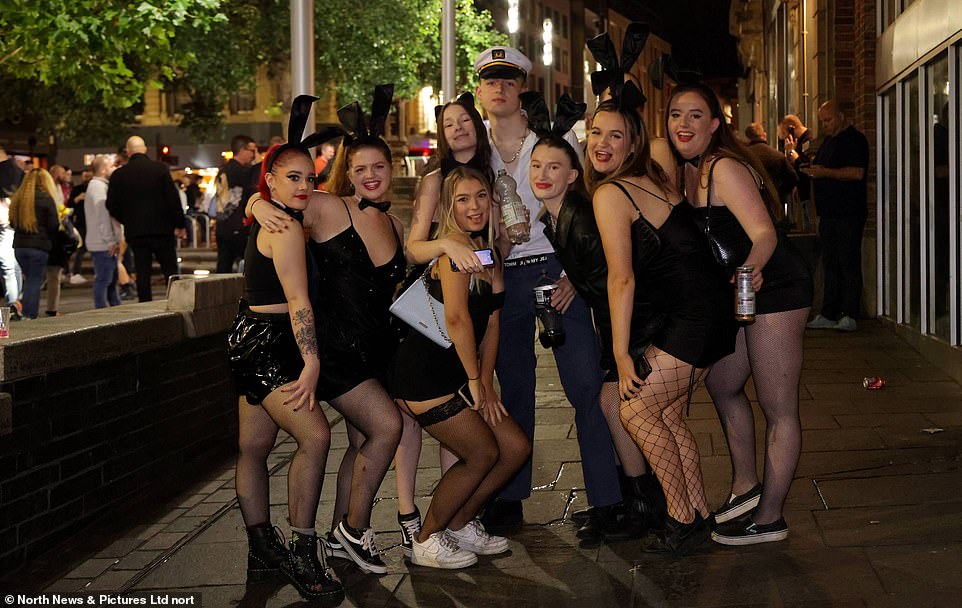 Pictured: A group of women dressed as playboy bunnies and one man dressed as a sailor – or possibly American Playboy publisher Hugh Hefner – on the streets of Newcastle on Saturday night 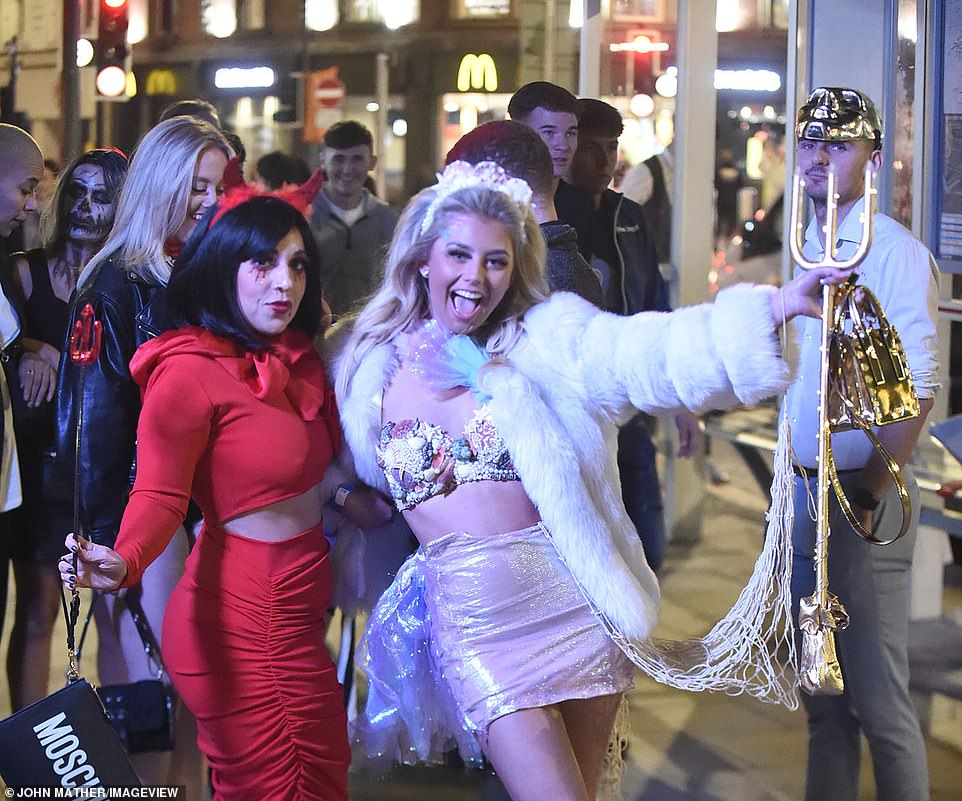 LEEDS: Women dressed as an angel and a devil strike a pose on Saturday night in Leeds city centre 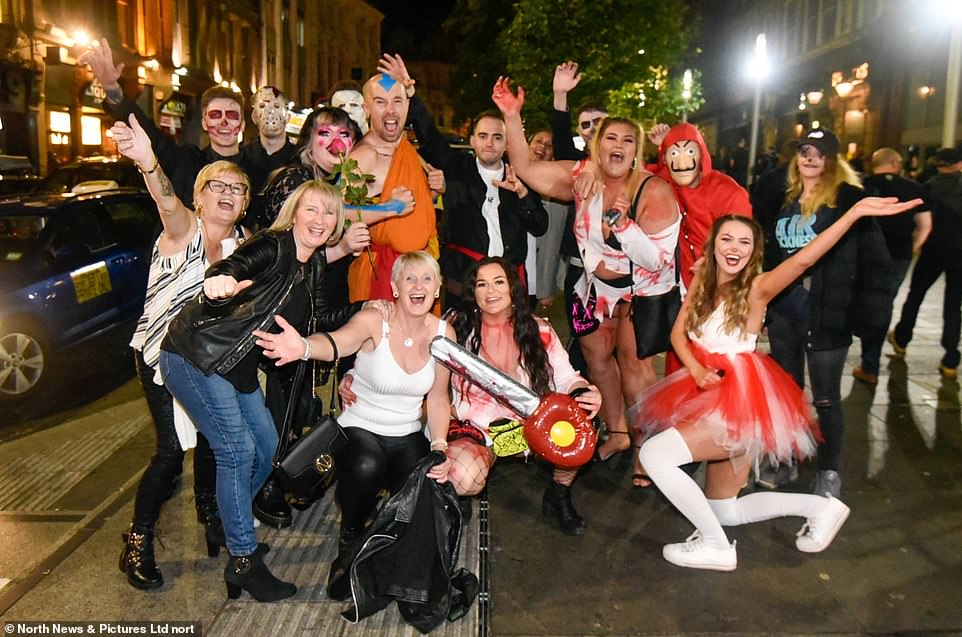 Pictured: A group of Halloween party-goers pose in Newcastle on Saturday night

Temperatures in Newcastle dropped to as low as 43 Fahrenheit (6C) overnight, but that and the threat of rain did not stop those celebrating Halloween from wearing tiny outfits that left little to the imagination.

Two women in Newcastle were pictured donning police outfits that were probably not the Northumbria Police’s standard issue.

Another group opted for a classic costume of a Playboy model, all set with a bunny’s tail and tights that took the meaning of thigh-high to a whole new level. 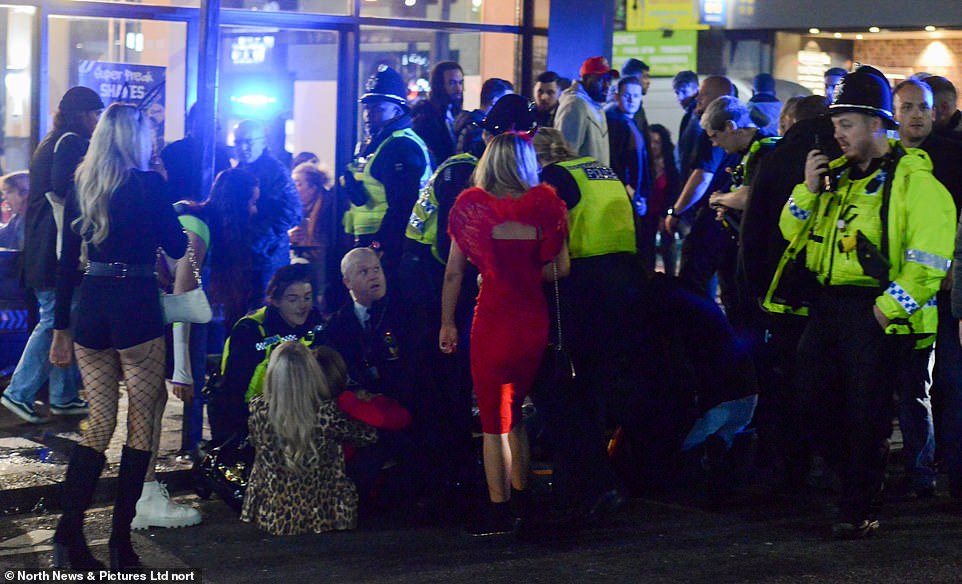 Pictures showed emergency services were out in force in Newcastle town centre in anticipation of people having one drink too many on one of the biggest party nights of the year. Pictured: Police gather around as people sit on the street 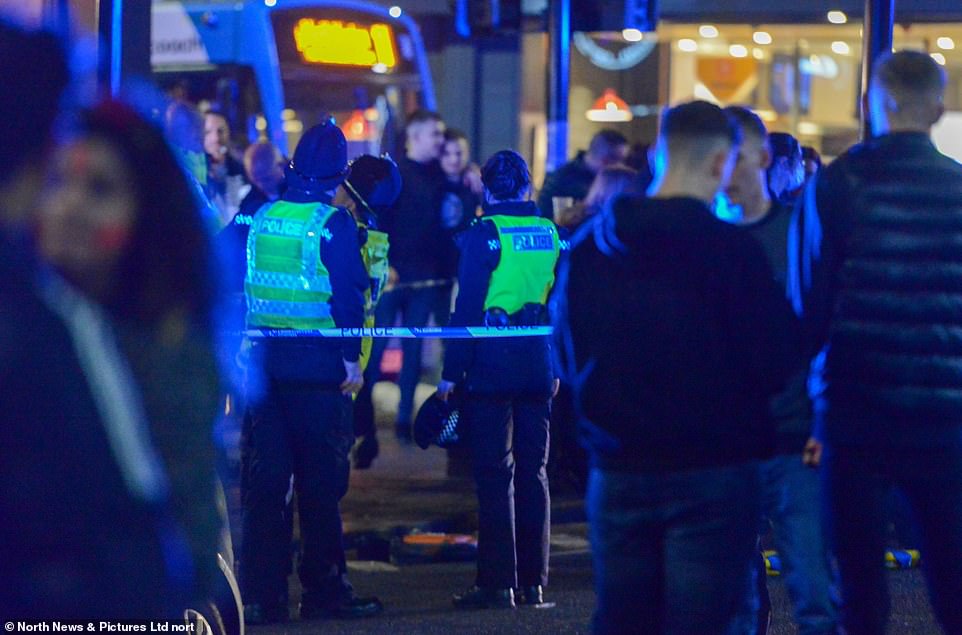 Pictured: Police tape is seen through the Halloween crowds in Newcastle on Saturday night 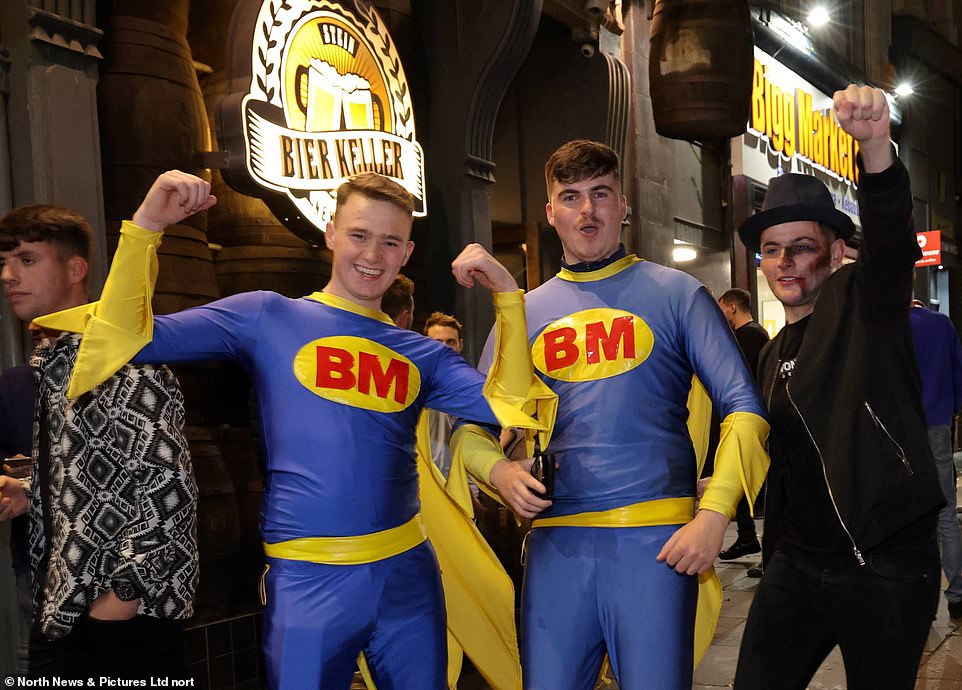 Pictured: Two men pose in superhero costumes outside of a bier keller in Newcastle on Saturday night 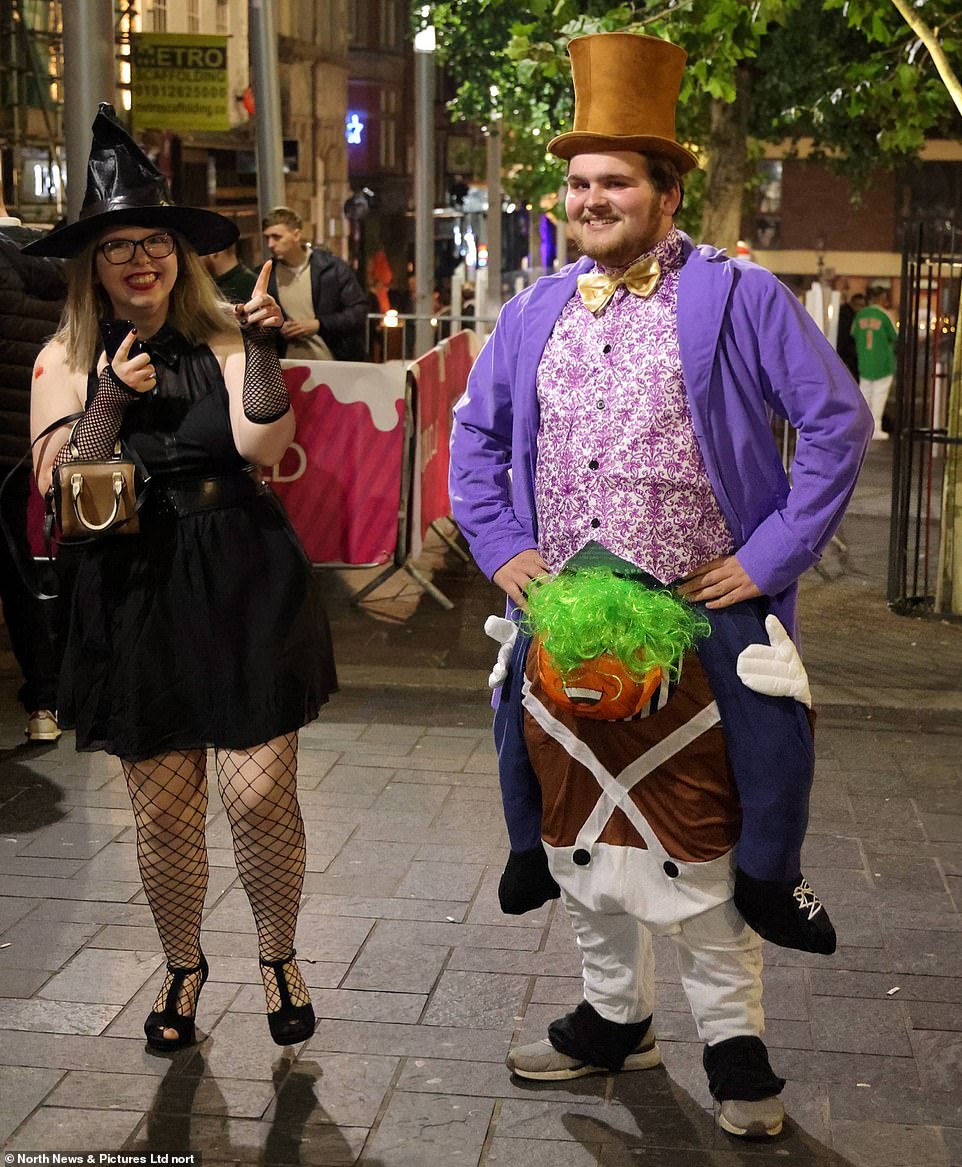 Pictured: A man dressed as Willy Wonka being carried by an Oompa Loompa shows off his innovative costume next to a woman dressed as a witch in Newcastle on Saturday night

Two other woman decided to mix a saintly theme into the night of horrors, with one dressing in red with devil horns, while her friend dressed in white with a fluffy halo above her head.

Another two women were seen dressed as corpse brides, with zombie-like makeup and blood spattered across their clothes, faces and chests.

One organised group of men went dressed as minions from the ‘Despicable Me’ movies, while one of them went as the criminal mastermind Gru.

Police were on high alert around the country – and especially in the capital – with the officers from the Metropolitan Police already shutting down three illegal raves this weekend as part of efforts to tackle anti-social behaviour in the capital. 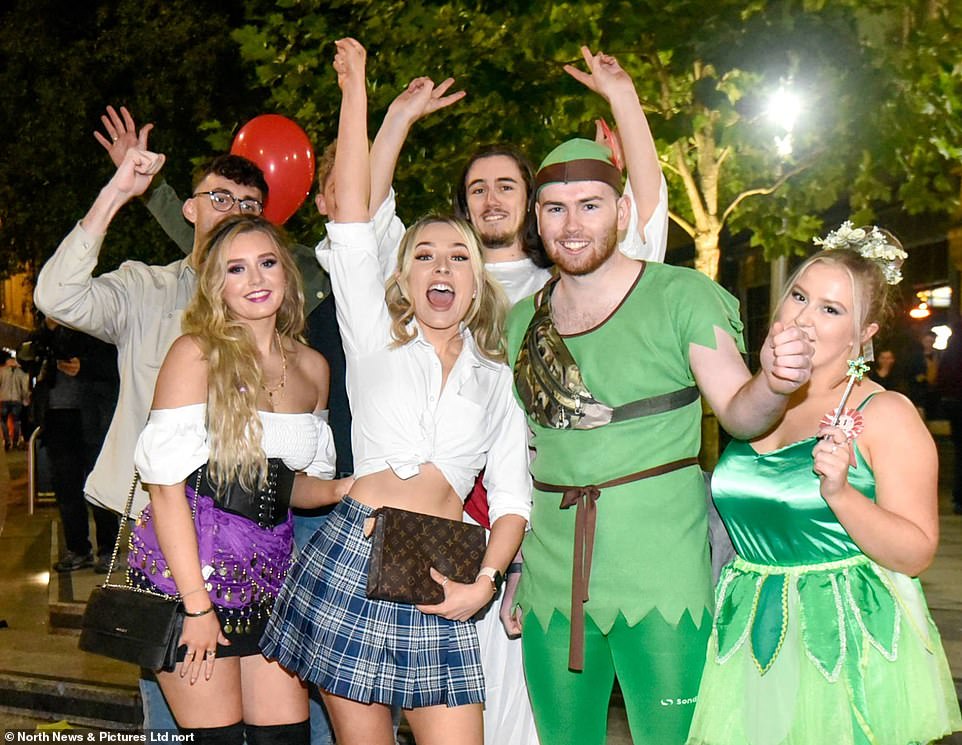 Pictured: A group of friends – two dressed as Peter Pan and Tinker Bell wave for the camera in Newcastle on Saturday night 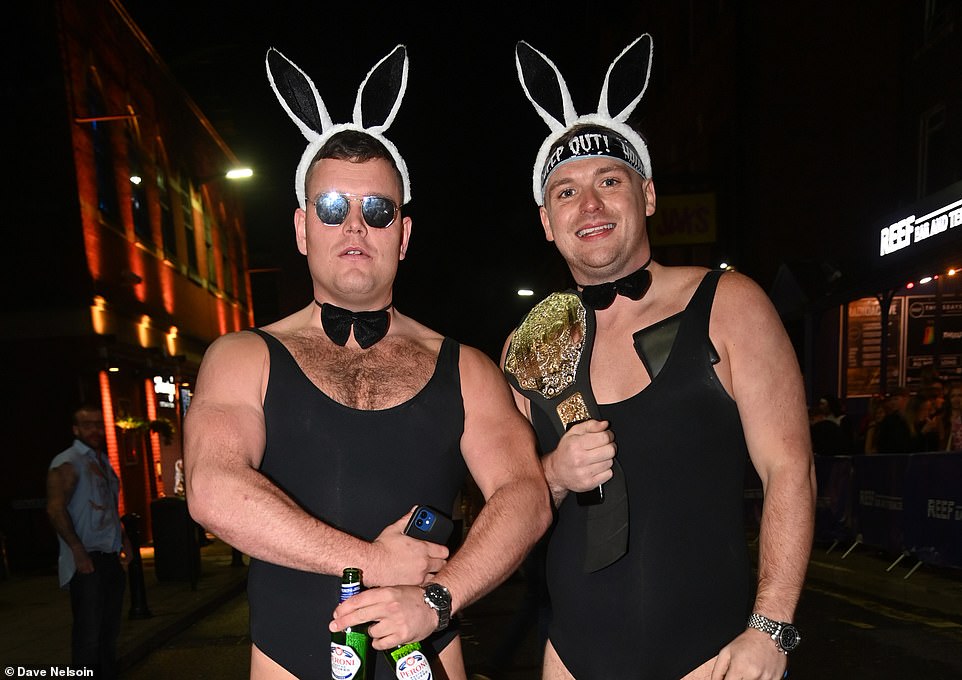 Hundreds of people had attended the events and some became hostile towards officers as they began to disperse crowds, the Met said.

Police were called to Glasshouse Walk in Lambeth just before midnight on Friday following complaints that fireworks had been set off.

Officers attended and found 300 youths at a community centre.

The Met said a number of fights broke out as people began to leave and fireworks and other projectiles were thrown, and back-up officers had to be called.

Crowds were dispersed at 1.20am on Saturday and one officer was treated for injuries.

The Met was later made aware of another unlicensed music event in railway arches on Corbetts Lane in Southwark. 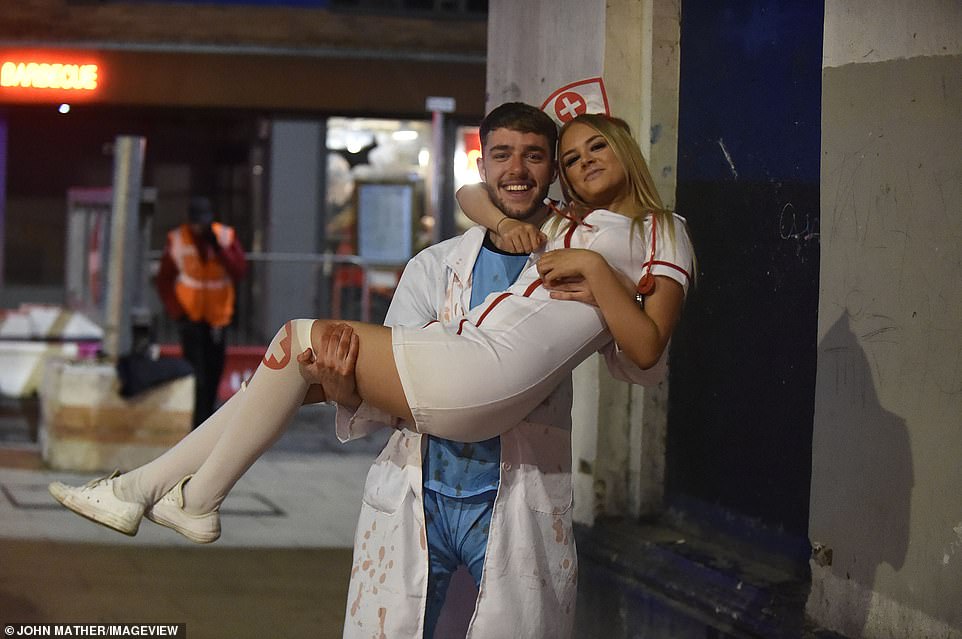 LEEDS: A doctor – wearing a blood-spattered lab coat – carrying a nurse pose for a photograph in Leeds 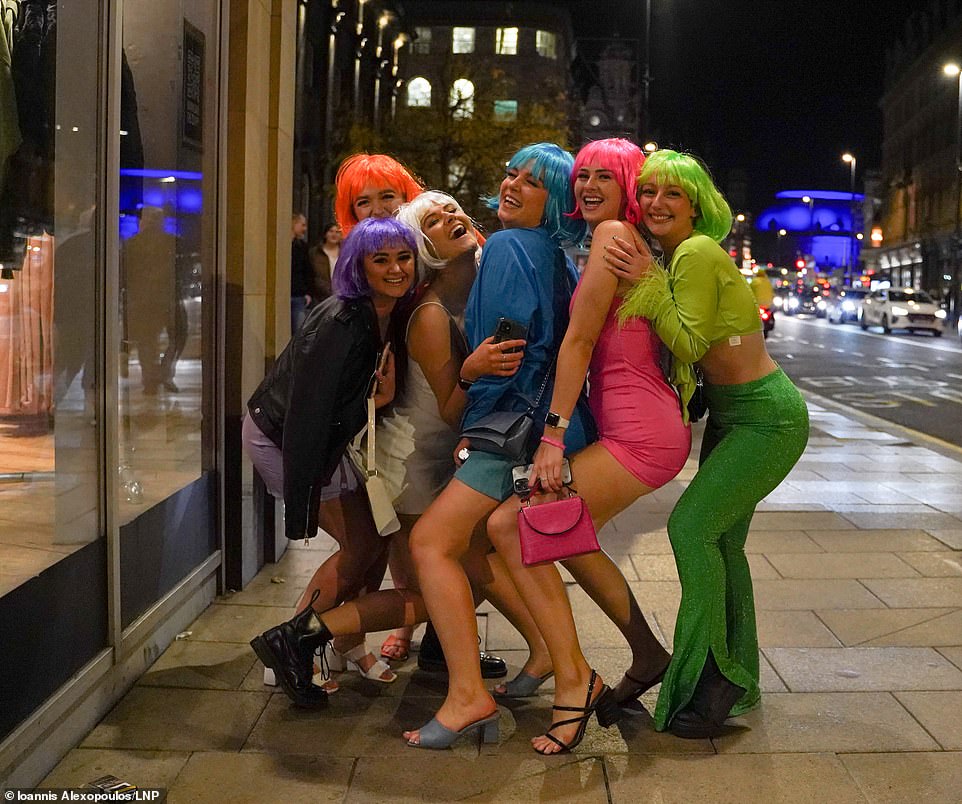 Pictured: A group of friends wearing brightly coloured wigs and matching clothes post on the streets of Leeds on Saturday

About 150 people were dispersed from the area and the sound system was seized, with the organiser fined for licensing offences.

Across the capital officers also attended an address on Birkbeck Street in Bethnal Green, having established that another unlicensed event was planned. When police arrived 30 people were present and quickly left.

Chief Inspector Jack May-Robinson said: ‘Whilst we appreciate that a lot of people will be celebrating Halloween this weekend with house parties, there are a number of people who will choose to host large music events.

‘These gatherings blight the lives of local residents,’ he added.

Yellow weather warnings for rain remain in place in several parts of the country overnight, including in Glasgow, where the global Cop26 climate summit is due to begin on Sunday. 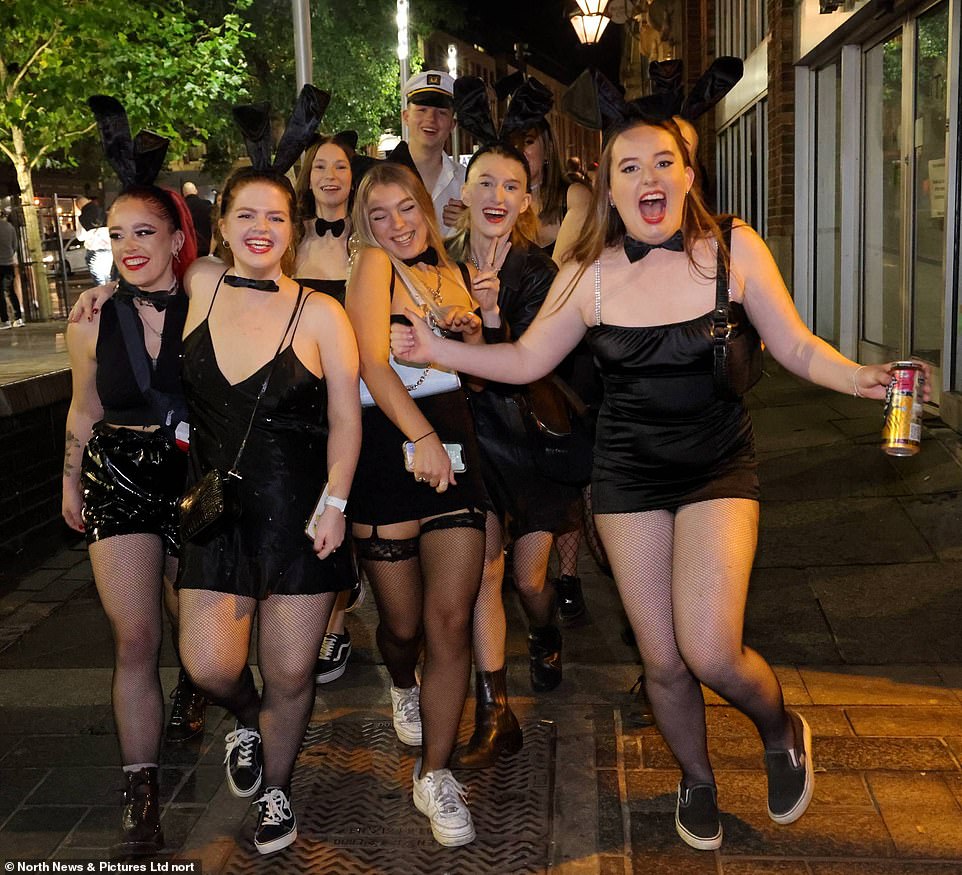 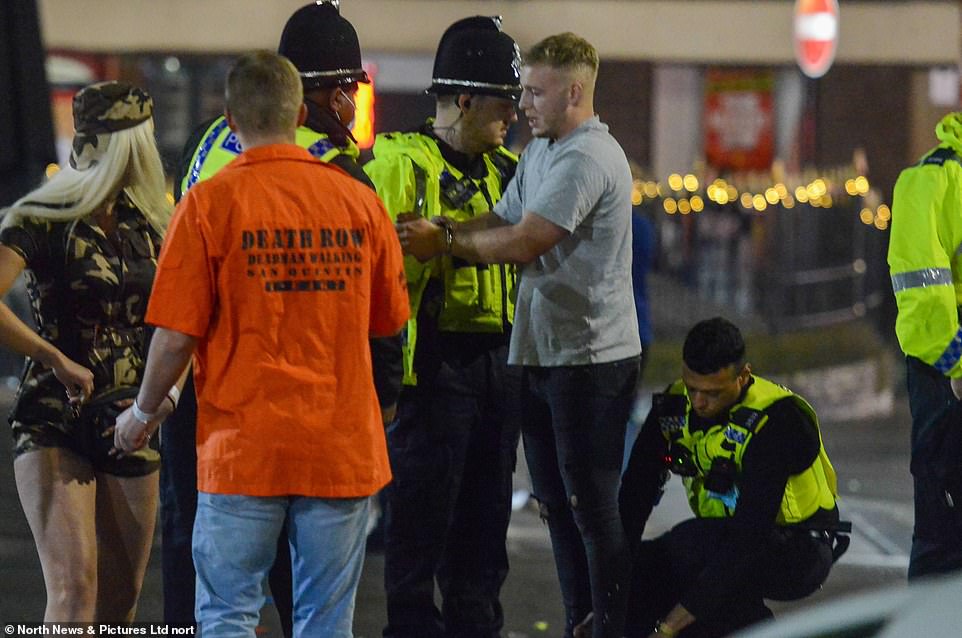 Pictured: A man is handcuffed in Newcastle on Saturday night while a man wearing a ‘death row’ t-shirt watches on

Wind speeds could reach more than 50 miles an hour, with potential for disruption and further wet weather going into the first week of November.

Steven Keats, meteorologist at the Met Office, said conditions would start ‘going downhill’ in the west throughout Sunday.

‘Further West heavy rain will be picking up and there’ll be some heavy rain coming in from the Atlantic,’ he said. ‘That will dominate the weather into tomorrow.

‘Heavy rain will push across into…western parts of England and Wales and be accompanied by some pretty strong and gusty winds.

Mr Keats said parts of Wales and southern England could see winds of around to 40 or 50 miles an hour which could ‘potentially cause problems.’

‘It’ll be a pretty wild start to Sunday,’ he said. ‘Given the fact that trees are in full leaf and the ground is pretty saturated in many areas, you could get one or trees coming down. It’s going to be very unsettled.’

WITCHCRAFT AND THE ORIGINS OF HALLOWEEN 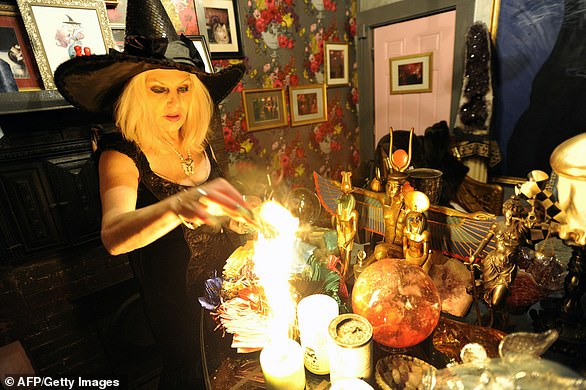 Salem’s internationally known and famous Witch Lorelei Stathopoloulos uses dragon powder on a candle in her shop on Halloween in Salem, Massachusetts

The word ‘witchcraft’ has three main connotations: the practice of magic or sorcery; the beliefs associated with the Western witch-hunts of the 14th to the 18th century; and varieties of the modern movement called Wicca.

Wicca was first publicized in 1954 by a British civil servant named Gerald Gardner who said the religion dated to an old witch cult that existed in secret for hundreds of years, originating in the pre-Christian Paganism of Europe.

Wicca is recognized as an official religion in the United States.

It is a primarily Western movement of nature worship based on pre-Christian traditions.

The Wiccan New Year of Samhain is considered a precursor to modern Halloween.

Today it coincides with Halloween on October 31.

Historically, it was a Celtic festival held on November 1 where the world of the gods was believed to be made visible to mankind.

Modern witches say it is a time of year when the ‘veil between the dead and the living is thin.’