Oregon has granted religious exemptions from the COVID-19 vaccine to at least 11 percent of state workers, almost double the passes given to Washington state employes as Oregon continues to battle legal challenges to the rules.

The 42,000 state workers in Oregon had until Monday to be fully vaccinated, get a religious exemption or get fired, but a public employee union worked out a deal to give 24,000 of them until November 30.

Gov. Kate Brown announced the vaccine mandate on August 10 as the state battled from case and hospitalization records during the Delta variant surge.

Brown and the Oregon Health Authority have fought at least eight lawsuits on the mandate. 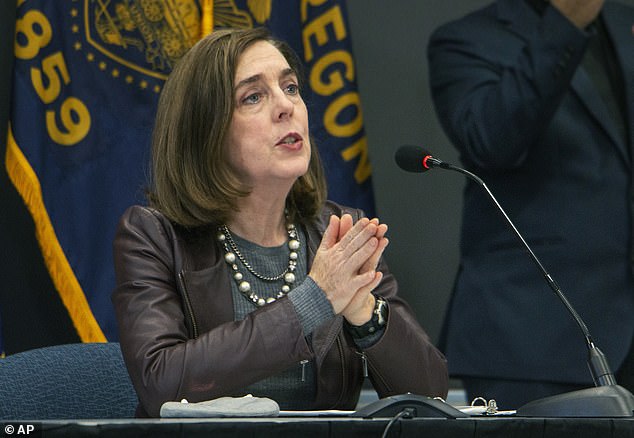 In August, Gov. Kate Brown gave all executive branch employees, including teachers, police officers and healthcare workers, until Monday to get fully vaccinated or get fired 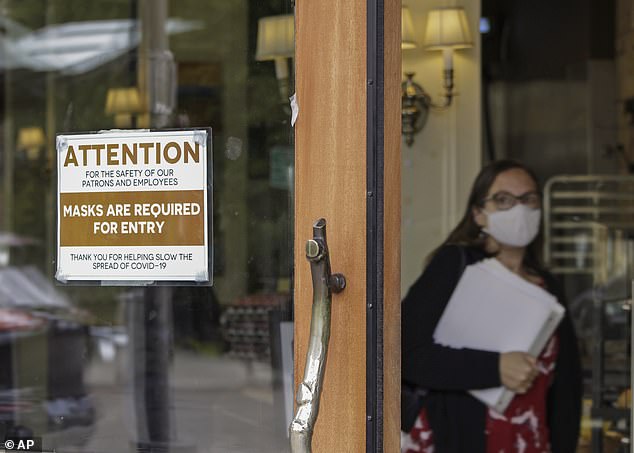 Brown also imposed a statewide indoor mask mandate. Since then, 11 percent of state workers have obtained a religious exemption from the vaccine. Above, a bakery in Lake Oswego in May

The lawsuits argued that the mandates violate workers’ rights and that the governor doesn’t have the power to institute them, but experts expect the next round to focus on how the mandates affect religious freedom.

In neighboring Washington, just 6.8 percent of state employees had a religious exemptions as of Tuesday, according to the Seattle Times.

As of Monday, 4,281 Oregon state workers had been granted religious exemptions. The state approved an additional 463 exemptions since then, but it’s not clear which are medical and which are religious.

‘Vaccines are safe and effective, and they are the surest way to prevent Oregonians from ending up in intensive care units,’ Brown said.

‘The only way we can stop the spread of COVID-19 for good is through vaccination.’ 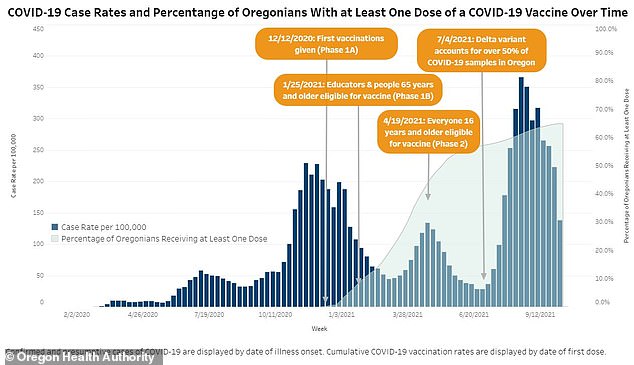 As of October 10, 65 percent of Oregon’s population had at least one dose of a COVID vaccine

Since then, she and the Oregon Health Authority have been served with at least eight lawsuits on the matter, according to Oregon Public Radio.

Earlier this month, judges tossed out two different lawsuits, one filed by a group of health care workers and the other one by a coalition of state police officers.

The courts argued that they had ‘little-to-no likelihood of success.’

The lawsuits, filed by Portland attorney Dan Thenell, argued that Brown and the OHA overstepped their authority and that the legislature is the only body with the power to mandate vaccines.

‘In this case, immunization is in fact otherwise required by state law. It is required by Executive Order 21-29, which the legislature has said has the effect of state law,’ Jefferson County Senior Judge Jack Landau wrote in one ruling.

But claims of refusing the vaccine over ‘sincere’ religious beliefs may now be examined closer than they usually are.

‘I think the reason is because so many people are making the religious exemption claims, so many people threaten the ability to get to herd immunity,’ he said. 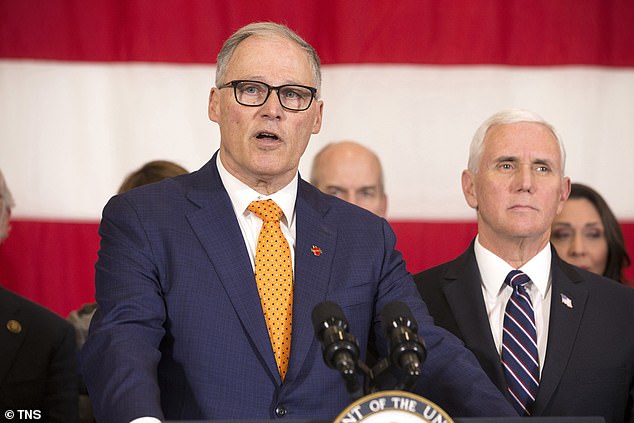 In Washington, Gov. Jay Inslee announced a similar statewide public worker vaccine mandate in August. It took effect on Monday, when an estimated 3 percent of them were fired or quit

‘In those circumstances, I think states and employers are sort of finding themselves with the necessity of looking closer at these claims and asking if they’re sincere in terms of where do religions stand.’

Oregon is letting individual agencies, rather than its centralized human resources department, to decide which employees have a ‘sincerely held religious belief’ – the legal standard for accommodations under Title VII of the Civil Rights Act.

Those who receive a religious exemption are able to keep their jobs, even if they require significant in-person work.

That’s not the case in Washington, where some workers who refuse the vaccine on religious grounds may still be fired if they can’t reasonably work from home, according to the Seattle Times.

As of Wednesday, 1,887 Washington state employees – or 3 percent of the workforce – have been terminated or left their positions after the vaccine mandate took effect this week, according to USA Today.

Oregon’s state workers had until Monday to get the vaccine. 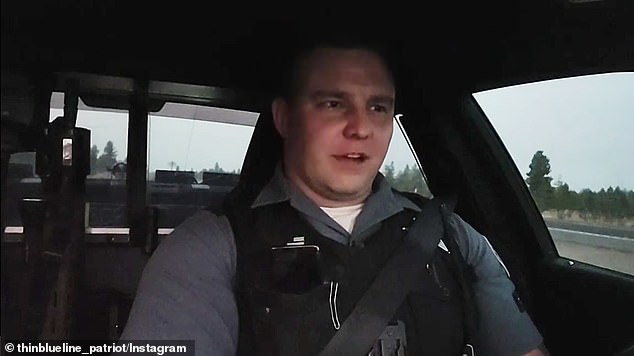 The Service Employees International Union 503 worked out a deal with the governor to give the 24,000 workers it represents – more than half of the total state workforce – until the end of November to get the shots, according to The Oregonian.

Healthcare workers and teachers still had until Monday to be fully vaccinated.

Last month, Oregon State Trooper Zachary Cowing, 29, was placed on leave over a widely-shared video which saw him condemn Brown’s ban as unconstitutional.

Speaking on Instagram, he said: ‘I swore an oath to uphold the Constitution of the United States, to protect the freedom of the people who pay my salary. I do not work for my governor but for them.’

It is unclear if Cowing was one of the people suing Brown, but he said that the governor ‘does not have free reign to impose medical decisions upon us.’

He continued: ‘I have personal and religious reasons as to why I will not take the vaccine, as well as the freedom to choose not to.’

Because Rolovich was fired ‘for cause,’ the school was able to void the remainder of his $3 million-a-year contract that runs through 2025.

Rolovich had applied for, and was denied, a religious exemption based on his ‘devout’ Catholic faith, according to a statement provided to DailyMail.com by his attorney, Brian Fahling.

The school has not publicly confirmed that information, and Rolovich says he plans to sue.