A grieving woman has told how a ‘big softie’ dog killed her brother and left her husband needing his legs amputated by just ‘nipping them’ with his bacteria-infested teeth.

Pauline Day, 62, revealed how the Japanese Akita called Ted tore her family’s life apart after her brother bought him as a pet for £1,500.

The family had no idea that Ted – who resembled a ‘giant teddy bear’ – was a silent killer with deadly bacteria crawling inside his mouth.

But in July, Pauline’s brother Barry Harris, 46, died at his home three days after Ted snapped at his arm, causing an infection and sending him into cardiac arrest.

Just a month later, Ted bit Pauline’s husband Mark, 61, as he walked the dog on the day of Barry’s funeral. 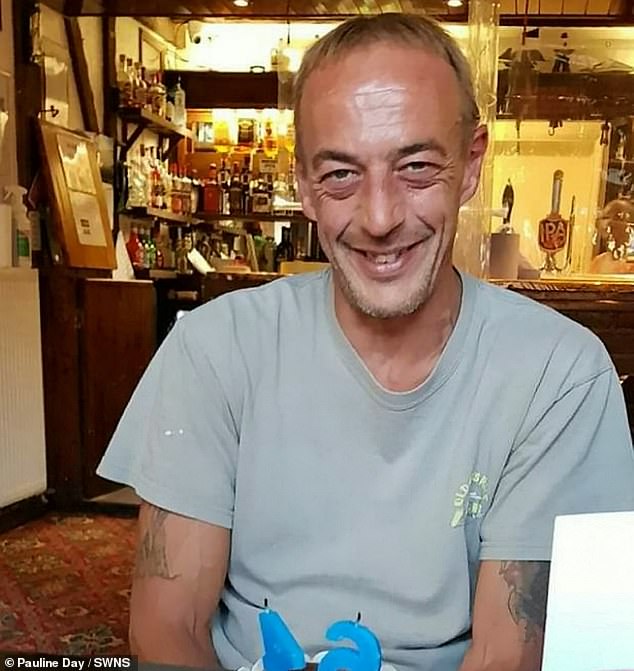 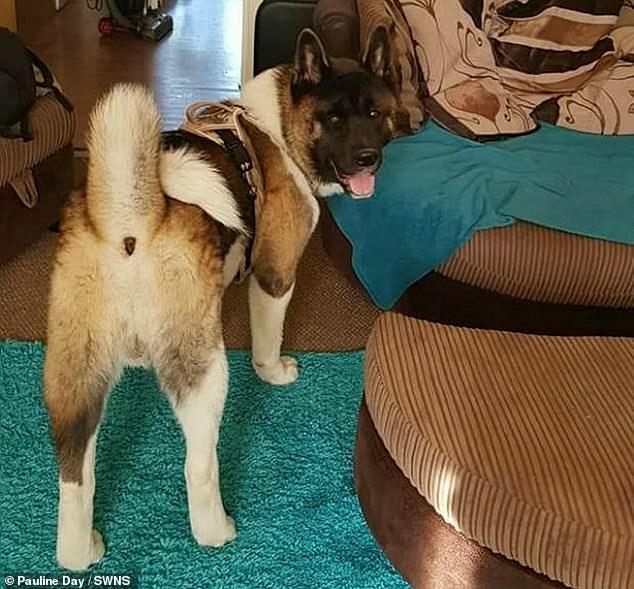 Ted, a Japanese Akita, has since been put down after he also passed a deadly infection to Barry’s brother-in-law Mark who is now facing a double leg amputation in a bid to fight sepsis

What to do if you are bitten by an animal

According to the Sepsis Alliance, no matter how affectionate a pet can be, bacterial infections from bites and scratches are always a possibility when dealing with animals.

The NHS advises that any time a bite or scratch from an animal breaks the skin, it is important to seek medical advice from a GP or minor injuries clinic unless the bite is serious in which case you should seek immediate treatment at A&E.

The NHS states that if you have been bitten, you should clean the wound immediately by running warm tap water over it for a couple of minutes before seeking medical advice.

It adds: ‘People and animals have a lot of bacteria in their mouths, which can cause an infection if a bite breaks the skin.

‘These infections are rarely serious if treated quickly, but occasionally they can spread to the blood or other parts of the body.’

You should seek urgent medical treatment if you begin to show signs of infection including redness and swelling around the wound, a fever or red streaks extending along the skin from the wound.

Mark, who’s been hospitalised since late August, has had all his left-hand fingers amputated and will lose both legs by next week due to sepsis caused by Ted’s toxic mouth.

Pauline, from Colchester, Essex, said: ‘They weren’t even attacked. Ted literally just broke the skin on my husband and my brother.

‘It was the softest dog but it had food issues. Whenever it was near food it was so aggressive. We think it was mistreated as a puppy.’

Barry, a groundworker, bought Ted from a private Facebook seller in a London flat in May this year for some ‘good company’ after going through a break-up.

The seller told Barry that Ted, who was 15-months-old, was well trained but when he got home he found that the pooch didn’t even respond to his name.

On July 7 – after less than six weeks together – Ted bit Barry as he was trying to remove an animal bone from his mouth while out on a walk.

After he was bitten, his arm soon swelled up and he fell ill with cold sweats and headaches.

Three days later, Barry tragically died at his home after his heart stopped.

Tragedy struck again on Barry’s funeral on August 19 when Mark took Ted for a morning walk and was nipped by the dog on his hand.

Pauline said her husband deteriorated over two days and said his body ‘was purple’.

In the days that follow, he had ‘legs like blocks of ice’ and said coldness was travelling up his arms and legs.

After Pauline realised the same thing was happening to her husband as had happened to her brother, Mark was rushed to hospital with a temperature, before he went into cardiac arrest and suffered multi-organ failure. 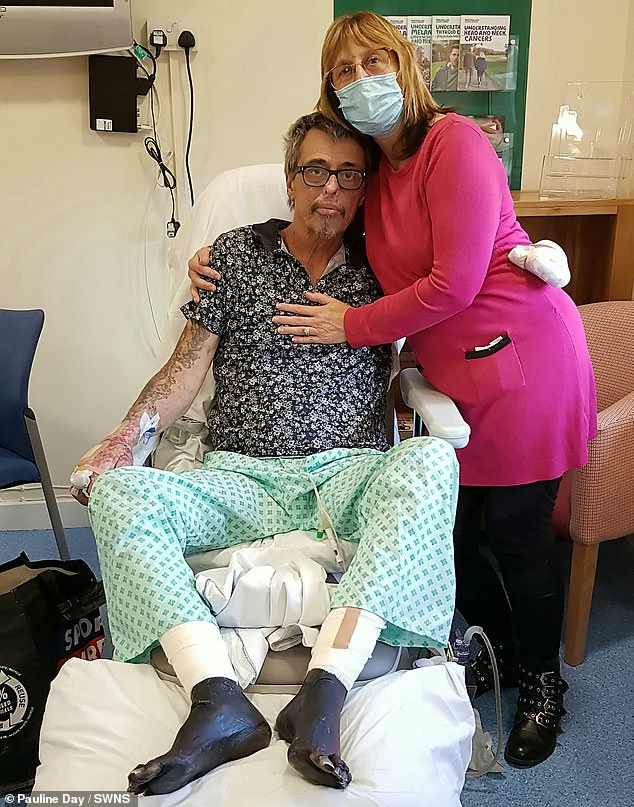 Mark Day (pictured with Paula, his wife and the sister of Barry) has already had seven fingers amputated and has been in hospital since contracting the infection from the dog bite in August

Doctors told Pauline that Mark’s condition was ‘100 per cent’ due to a bacterial infection from a dog.

Mark, a builder, has been in hospital ever since and now faces having both legs amputated next week due to sepsis. He’s already had seven fingers removed.

Pauline said: ‘It’s like something out of a nightmare. You just don’t believe this has happened.

‘The shock of my brother was one thing and then my husband. It’s just surreal.’

Ted has been put down as the doctors described the bacteria inside Mark as ‘incredibly severe’ and ‘100 per cent from the dog’.

She also checked the paperwork that Ted’s owner gave to Barry when he bought the dog earlier this year and found that he had no vaccination history.

‘In the booklet, there was nothing with vaccinations.

‘They gave him a false history.’

What are the key symptoms of sepsis? The ‘silent killer’ that can cause death in minutes

Sepsis, known as the ‘silent killer’, strikes when an infection such as blood poisoning sparks a violent immune response in which the body attacks its own organs.

It is a potentially life-threatening condition, triggered by an infection or injury.  Around 245,000 people develop sepsis in the UK each year and 52,000 die, according to the UK Sepsis Trust.

Instead of attacking the invading bug, the body turns on itself, shutting down vital organs.

If caught early enough, it’s easily treated with intravenous antibiotics and fluids, but these must be given as soon as sepsis is suspected – it strikes with frightening speed and, for every hour of delay, a patient’s chance of dying increases 8 per cent.

Sepsis is a leading cause of avoidable death killing 44,000 people each year

The early symptoms of sepsis can be easily confused with more mild conditions, meaning it can be difficult to diagnose.

A high temperature (fever), chills and shivering, a fast heartbeat and rapid breathing are also indicators.

A patient can rapidly deteriorate if sepsis is missed early on, so quick diagnosis and treatment is vital – yet this rarely happens.

In the early stages, sepsis can be mistaken for a chest infection, flu or upset stomach.

It is most common and dangerous in older adults, pregnant women, children younger than one, people with chronic conditions or those who have weakened immune systems.

The six signs of something potentially deadly can be identified by the acronym ‘SEPSIS’:

Anyone who develops any of these symptoms should seek medical help urgently — and ask doctors: ‘Could this be sepsis?’