The meeting comes days after Kenyatta’s family was named as owners of 13 offshore companies in the Pandora Papers, with Biden vowing before their meeting to talk to the leader about ‘transparency.’

In the Oval, Biden thanked Kenyatta for his ‘leadership in defending the peace, security, and democratic instincts of the region and your country.’

‘You’re doing a heck of a job,’ Biden told Kenyatta.

‘You know, Kenya is currently the President of the U.N. Security Council. Thanks for letting us stay in,’ Biden also joked.

He announced that the U.S. would be giving additional vaccine doses to the African Union.

‘And I’m proud to announce that – today, that we’re making an additional historic one-time donation of 17 more million doses of J&J vaccine to the AU, and we’re going to be sending some more of these by the end of the year to Kenya,’ Biden said.

But Biden didn’t answer reporters questions or bring up the Pandora Papers revelations in front of the press. 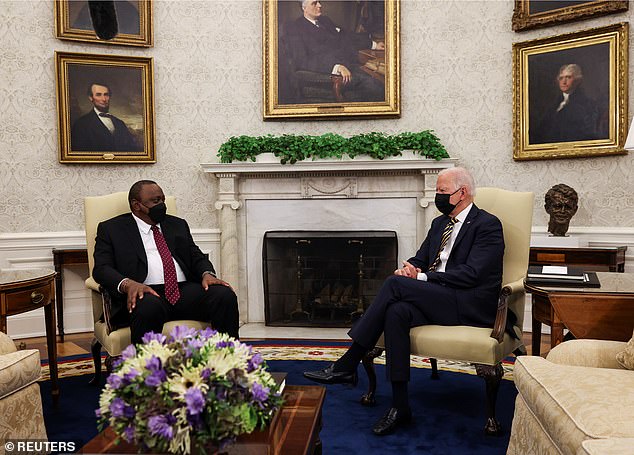 The Kenyattas’ holdings include a company with investments worth $30m, according to a massive leak of financial documents from law firms in Panama, the British Virgin Islands (BVI) and other tax havens.

Kenyatta, president since 2013, has promised a full response when he returns from his international trip.

He is one of a number of world leaders caught up in the embarrassing leak.

Although holding assets offshore is not illegal, it could cause political problems for someone like Kenyatta who campaigned against corruption.

‘The leaders will discuss the strong U.S.-Kenyan bilateral relationship and the need to bring transparency and accountability to domestic and international financial systems,’ White House Press Secretary Jen Psaki said previewing the meeting earlier this week. 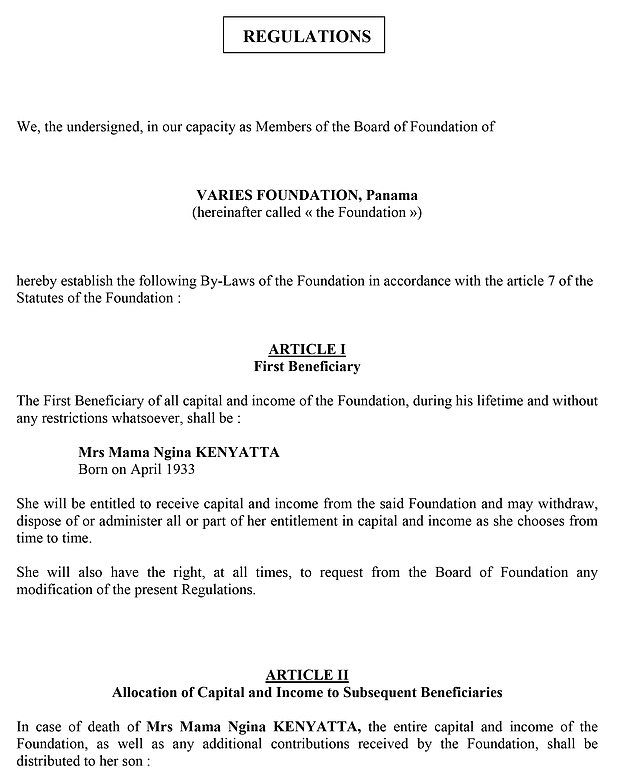 A massive leak of financial documents revealed that members of the Kenyatta family owned 13 offshore companies, including one with $30 million in investments 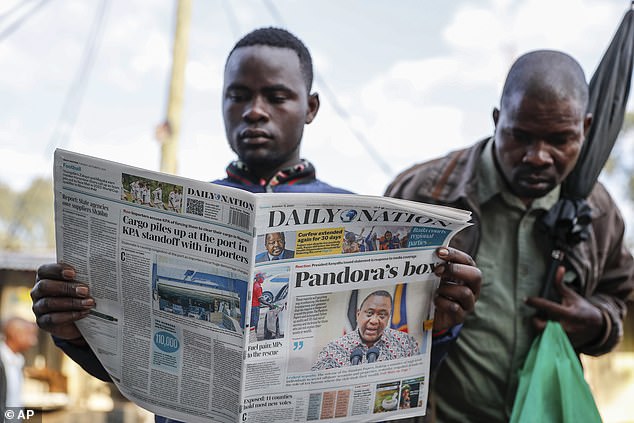 Kenyans pore over the revelations from the Pandora Papers, which revealed how Kenyatta was one of hundreds of politicians identified as beneficiaries of secret financial holdings

For his part, Kenyatta welcomed the release of the Pandora Papers by the International Consortium of Investigative Journalists and other news organizations.

‘These reports will go a long way in enhancing the financial transparency and openness that we require in Kenya and around the globe,’ he said in a statement.

However, he did not respond to the specific allegations against him.

‘The movement of illicit funds, proceeds of crime and corruption thrive in an environment of secrecy and darkness,’ he added.

‘On the Pandora papers, this is an opportunity for the United States to build off of our current efforts with the Kenyans to bring additional transparency and accountability to domestic and international financial systems,’ said the official.

Kenyatta is the son of the country’s first president.

Documents released in the leak show that his mother Ngina, 88, is named as the first benefactor of the Varies foundation set up in 2003. Her son is the second benefactor and would stand to inherit it after her death.

Its value is unknown.

Panama is a sought-after destination for holdings as the owners are known only by their lawyers and they do not have to register their identities with the Panamanian government, according to the ICIJ. 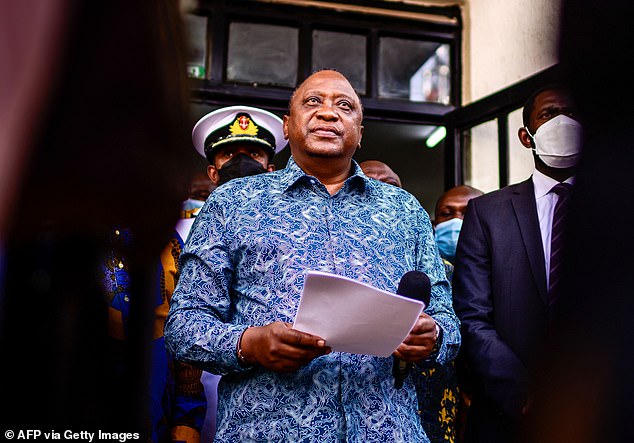 Kenyatta is the son of Kenya’s first president, Jomo Kenyatta, and took power in 2013 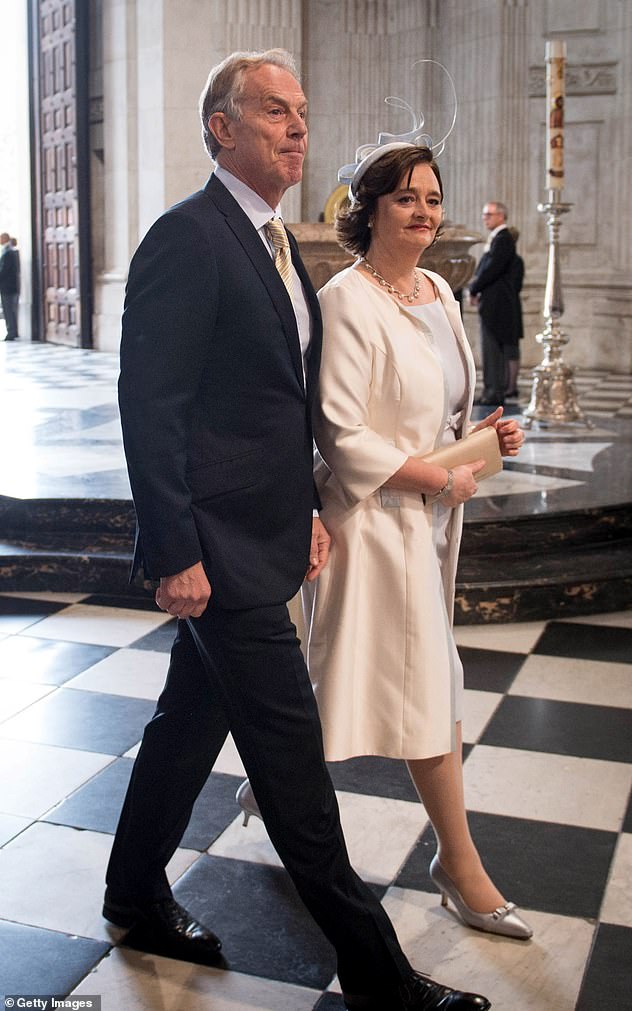 The Pandora Papers also revealed that Tony Blair (left) and his wife, Cherie (right), secretly benefited from a highly-controversial tax loophole in 2017

Kenyatta has defended himself robustly against allegations that his family had hidden its wealth.

‘As I have always stated, what we own – what we have – is open to the public. As a public servant I’m supposed to make my wealth known and we declare every year,’ he told the BBC in 2018.

The BBC also reported from the leaks that UBP private-wealth advisers helped Kenyatta’s brother, Muhoho, set up another Panamanian entity, the Criselle Foundation, in 2003.

Another BVI company which Muhoho owned had a $30m valuation in stocks and bonds as of November 2016.

Financial transparency will not be the only topic when Kenyatta meets Biden – the president’s first meeting with an African leader since taking power.

Kenya has long had a strong relationship with the U.S., partnering with Washington in efforts to thwart Islamic terrorism.

It a powerful regional player and it has a border with Ethiopia, where war has triggered a humanitarian crisis.