This week, 60 years after President John F. Kennedy launched the race to the moon — and formally initiated the advent of the space age — William Shatner, at the grand old age of 90, made his own trip to the final frontier.

Shatner, who played James T. Kirk, captain of the USS Enterprise in the iconic 1960s TV series Star Trek, has been lauded worldwide for his successful bid to ‘oldly go’ where no one his age has been before.

However, one high-profile observer was less than impressed, and barely had Shatner made it back to Earth, than he was making his feelings known.

In an unprecedented move, Prince William attacked the ‘space tourism’ now being developed by the world’s richest men — of which Shatner was beneficiary — as a waste of resources.

In doing so, he was underlining the Royal Family’s position as perhaps Britain’s most effective environmental pressure group, a position that was reinforced less than 24 hours later by the Queen’s comments about those who talk about protecting the environment ‘. . . but they don’t do’. 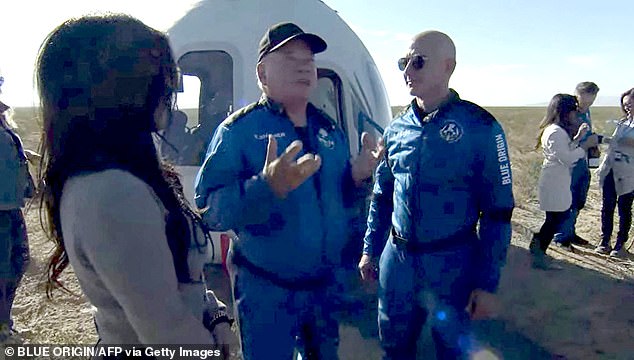 This week, William Shatner, (pictured with Blue Origin founder Jeff Bezos after the flight) at the grand old age of 90, made his own trip to the final frontier

It was in 1961 that President Kennedy outlined his national goal for the decade of ‘landing a man on the moon and returning him safely to the Earth’. He would describe the ‘great and honourable’ mission of reaching the moon and turning the space race into ‘a force for good’.

U.S. ‘leadership in science and in industry, our hopes for peace and security, our obligations to ourselves and to others, all require us to make this effort’, Kennedy told a world that still retained much of its post-war optimism.

Almost 50 years since the last of the five moon landings, the balance sheet, while not fulfilling in totality JFK’s lofty ambitions, looks broadly in the black.

The technology developed during the space race helped produce many products that have greatly improved our lives, from Velcro and non-stick frying pans to heart pacemakers and kidney dialysis machines.

Just as important, it also gave us the first view of our fragile blue-green oasis in the limitless black desert of space that has done so much to inspire the environmental movement.

However, it is far less possible to find the positives for mankind in William Shatner’s ten-minute jaunt courtesy of Amazon billionaire Jeff Bezos.

While it was a PR stroke of genius to invite ‘Captain Kirk’ to be a guest passenger, it was scarcely a surprise. Bezos, who has spent $10 billion and counting on his space company Blue Origin to date, is a Trekkie obsessive who once had a cameo part as an alien in a Star Trek episode.

To Prince William and most of the rest of us I would argue that Bezos’s space ventures — and rival enterprises by Elon Musk and Richard Branson — look like self-indulgence by egotistical and relentlessly competitive billionaires. 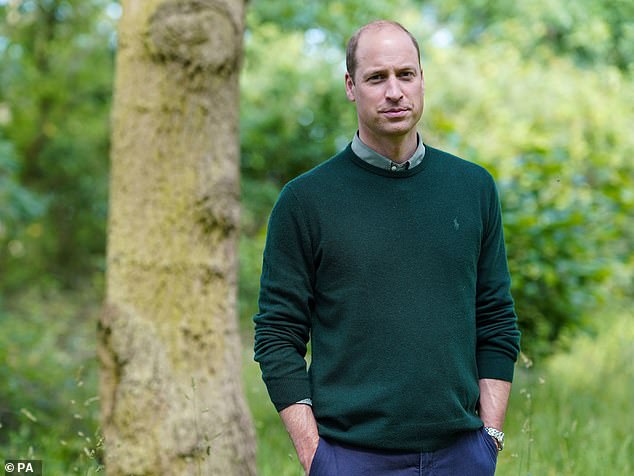 It is an impression strengthened by the remarkably phallic shape of the rocket that took Shatner and three fellow passengers aloft. Surely all that money could have been far better spent? Certainly William thinks so

It is an impression strengthened by the remarkably phallic shape of the rocket that took Shatner and three fellow passengers aloft. Surely all that money could have been far better spent? Certainly William thinks so.

‘We need some of the world’s greatest brains and minds fixed on trying to repair this planet, not trying to find the next place to go and live,’ he said.

‘I want the things that I’ve enjoyed — the outdoor life, nature, the environment — to be there for my children and everyone else’s children. If we’re not careful we’re robbing from our children’s future.’

The Prince has the authority to speak out. His green credentials are not in doubt. His work during his gap year at a nature conservancy and refuge in Kenya opened his eyes to the threat posed by man to Africa’s wildlife and he has shed tears over slaughtered rhinos.

He helped persuade China to end its ivory trade, and this weekend sees the inaugural awards ceremony of his Earthshot Prize giving £1 million in funding to solutions to environmental problems.

The influence of his father Prince Charles, who has campaigned on a host of green issues for 50 years, and his grandfather, Prince Philip, who helped found the World Wildlife Fund, has been key. 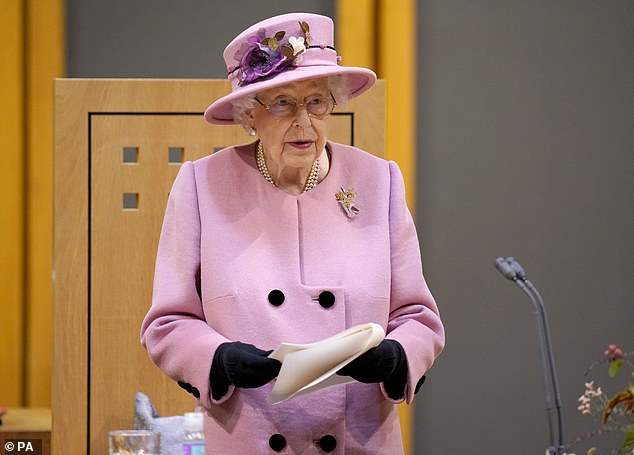 Even before her comments about COP26, the 2021 United Nations Climate Change Conference in Glasgow, we knew the Queen was no slouch when it came to the environment

Even before her comments about COP26, the 2021 United Nations Climate Change Conference in Glasgow, we knew the Queen was no slouch when it came to the environment.

She takes care to save energy in her palaces — to the point of going round switching off lights herself — and cultivates the gardens organically.

In truth, even their supporters have trouble mustering convincing arguments in favour of the billionaires’ efforts.

They say the advent of space tourism will help us better understand the vulnerability of the planet. But flights are beyond the reach of anyone but a hugely wealthy elite and will remain so for some time.

The cost of tickets on Bezos’s rocket is secret, but Branson charges $450,000 a time.

Ironically, as Prince William also pointed out, there are ‘fundamental questions’ over the pollution caused by space flights. A space tourist’s carbon footprint is generally about 100 times as high as a transatlantic aircraft passenger’s.

Worse, rockets pollute the sensitive higher layers of the atmosphere, with effects we do not yet understand. There are also well-founded concerns that the emissions could damage the ozone layer, which is only just recovering from previous depletion after a massive international effort.

Jeff Bezos claims his rocket is cleaner than those of his rivals because its fuel, hydrogen and oxygen, emits only water.

But experts point out even water can have a warming effect when ejected into the upper atmosphere, while the heat given off by all rockets as they climb changes atmospheric chemistry in damaging ways. 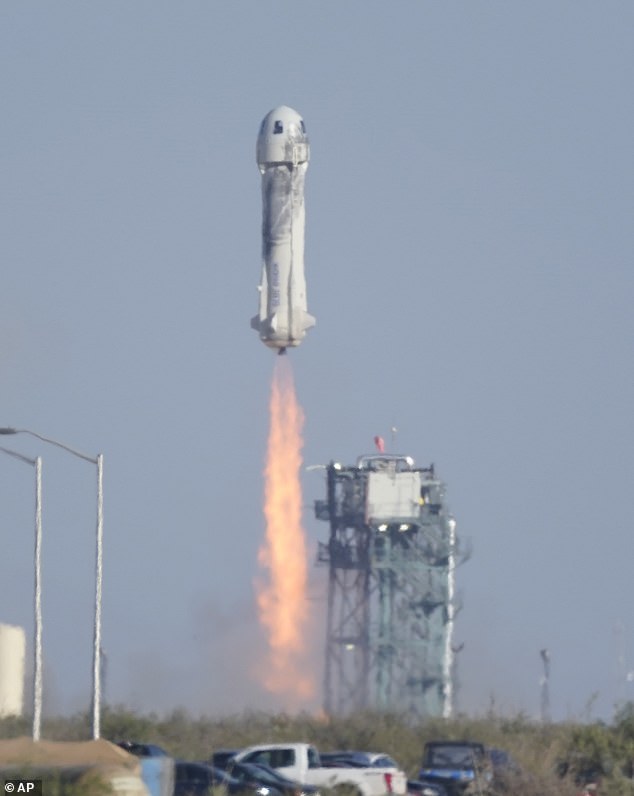 They say the advent of space tourism will help us better understand the vulnerability of the planet (pictured, a rocket carrying William Shatner launches)

Making Bezos’s fuel is polluting. And two weeks ago, 21 current and former employees of his space enterprise issued a statement accusing it of lacking environmental concern.

At the moment flights are few and far between, but the billionaires are in a new space race to massively expand.

The pollution threat will grow accordingly. But it is Prince William’s main point that is the most important of all. The urgent need is to save the planet we have got.

With global warming accelerating, and only some 20 years remaining to keep beneath the danger level of a 1.5c temperature rise, we should be prioritising the battle against climate change.

Investment in that area would do more than space tourism to protect economies and create jobs.

Providing safe drinking water to the 2.2 billion people, one third of the world’s population, who lack it and suffer an enormous toll of death and disease as a result would cost just £10 billion in comparison.

We know how to combat global warming and how to provide everyone with clean water.

It’s not, as they say, rocket science. But for the egotistical billionaires, that is precisely the problem.