An anti-vax mummy blogger who compared ‘segregated’ anti-vaxxers to Jewish Holocaust victims has said she would rather inject heroin than get vaccinated while forcing her children to make a vile statement against the jab.

Sarah Mills, from the NSW Mid North Coast, is among a small minority refusing the Covid vaccine and was therefore unable to celebrate Freedom Day on Monday.

However, this didn’t seem to dampen the mummy blogger’s spirits as she took to Instagram to boast about her botox regime to her more than 7,900 followers.

The mother-of-three uploaded a photo mid-procedure with the caption: ‘OMG she injects botox and fillers into her face but won’t get the (syringe emoji)’.

‘Yeah – I would sooner inject a dirty batch of H (heroin) before I lined up for your smack sheen,’ she continued. 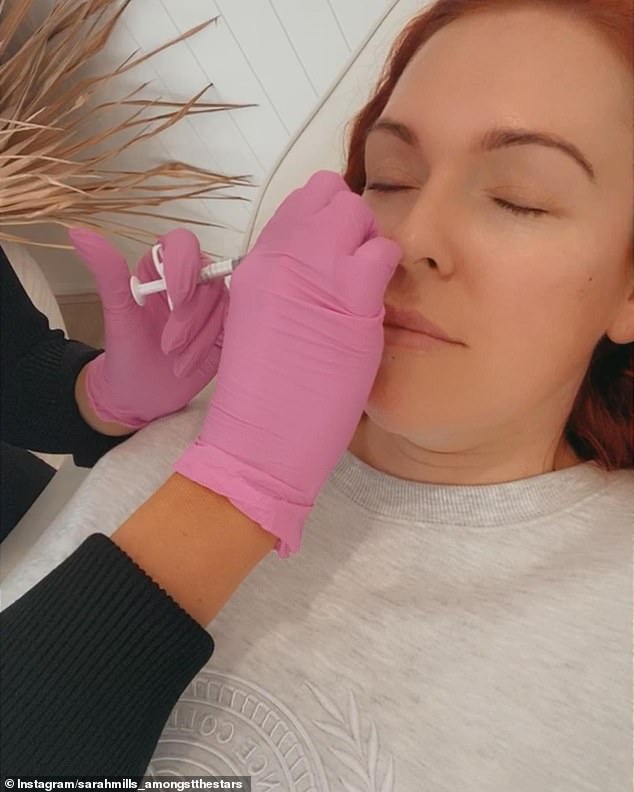 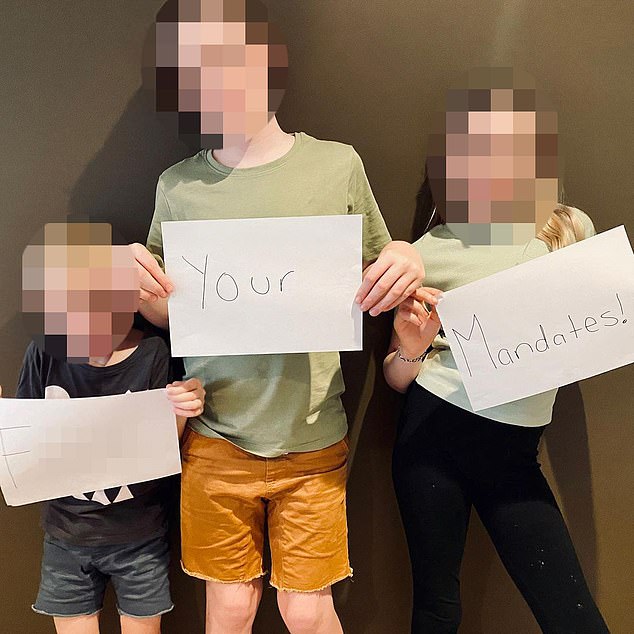 Ms Mills has pictured her three young children in several of her social media posts, the most recent featuring the kids holding homemade signs that read ‘F**k Your Mandates!’ (pictured)

The mummy blogger took to her Instagram Stories to thank the people that had sent her ‘love and support’ following her most recent anti-vax posts.

‘This is connecting me with the people that I am supposed to align and connect with, so I am very, very grateful for that,’ she said on Wednesday night.

‘As many of you would know who are in this community, censorship is real and it can feel hard to feel supported in this time when you often feel like you’re alone.

‘We’re not alone in this. It’s amazing to connect with likeminded souls, so I’m so appreciative of that, I’m so thankful.’

The children are seen standing in a line holding the signs ‘F**k Your Mandates!’. 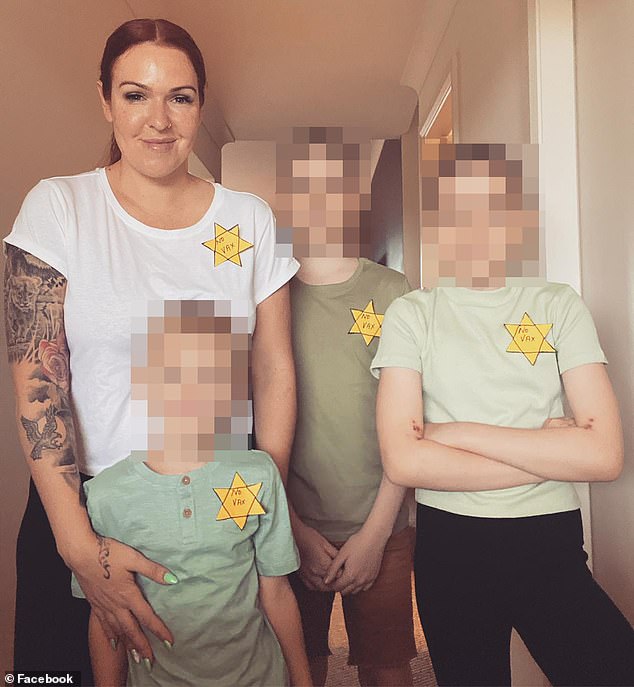 It comes just days after Ms Mills was slammed for pinning the Star of David onto her children’s clothing in an offensive comparison between ‘segregated’ Australians who refuse the Covid jab and Holocaust victims.

She compared the treatment of anti-vaxxers to Holocaust victims, stating ‘history is repeating itself’, beginning with the ‘segregation and exclusion’ of people who choose not to get the jab.

In a separate post, Ms Mills wore a striped button down shirt with a sticker numbered ‘385968’ on the breast of her shirt.

‘Does anyone know where we get our full uniform? I’ve found the shirt but wasn’t sure if there’s anywhere you can get them as a set? or are we just provided them upon arrival? Sending love to my future inmates,’ she captioned the photo. 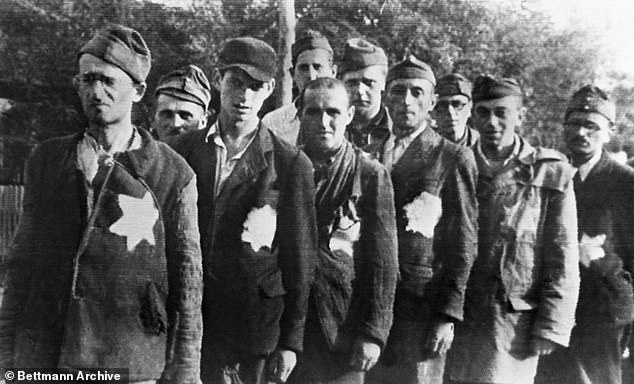 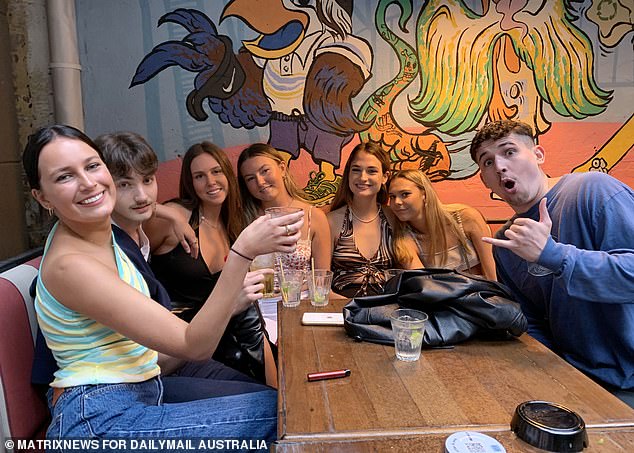 Thousands of cooped-up revellers braved the rain and chilly conditions across Sydney on Monday as they partied for the first time in 106 days (pictured, pub-goers at The Marlborough in Sydney’s Newtown)

Six million Jewish people were systemically murdered by Nazis during the Holocaust while many more were displaced, tortured and discriminated against.

It was considered an offence to be gay, a Gypsy, or a Jehovah’s Witness.

A yellow star with the word ‘Jew’ in the middle was pinned on the shirts of Jewish people over the age of six to humiliate and dehumanise them.

They were segregated, deported and eventually murdered.

The Holocaust will forever be remembered as one of the most significant crimes against humanity in history, and for Dr Dvir Abramovich, Chairman of the Anti-Defamation Commission, watching anti-vaxxers exploit the trauma of victims is ‘beyond offensive’.

In a separate post, Ms Mills wore a striped button down shirt with a sticker numbered ‘385968’ on the breast of her shirt 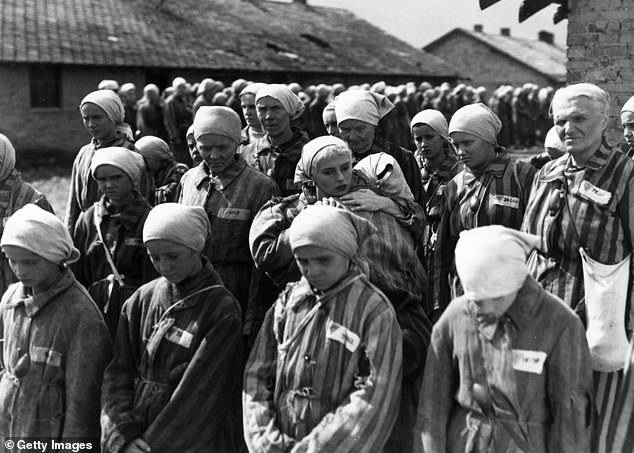 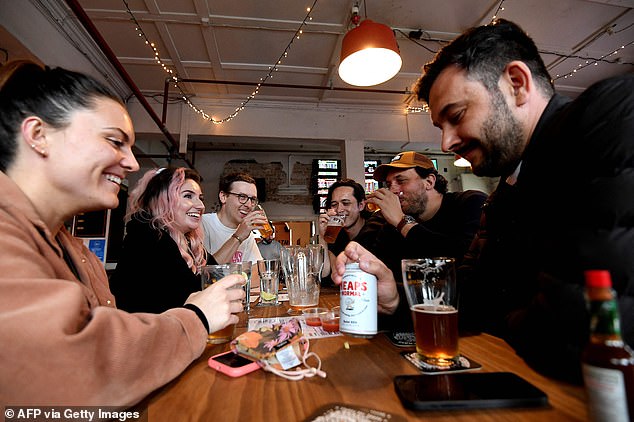 People enjoy their drinks at a pub on October 11, 2021, as Sydney ended a lockdown against the Covid-19 coronavirus after 106 days and restaurants began throwing open their doors to anyone who could prove they were vaccinated

‘It is beyond outrageous to compare actions taken by state governments in response to the Covid-19 outbreak to the monstrous laws enacted by Hitler’s Third Reich or to claim that the vaccination policies are in any way similar to the ‘Final Solution’ that led to death camps.’

He slammed Ms Mills for using ‘her children… to exploit the infamous yellow star’.

Ms Mills said pinning the star to her children’s clothing – as well as her own – was symbolic of ‘how things began’ during the Holocaust.

She claimed the vaccine was in ‘violation of the Nuremburg Code’, a set of research ethics principles for human experimentation that were introduced post World War 2.

The post attracted significant backlash, but the 34-year-old said she was ‘no stranger to controversy’ and was actually ‘glad this has people talking… that was the point’.

‘This is not Freedom Day. This is history repeating our mistakes, and if you’ve wondered what you would’ve done in the past, take note because you’re doing it now.’

She told Daily Mail Australia she ‘was not saying this lockdown was comparable to the holocaust’ and instead wanted to highlight that there is ‘a whole community being discriminated against and bullied for their personal medical choices’. 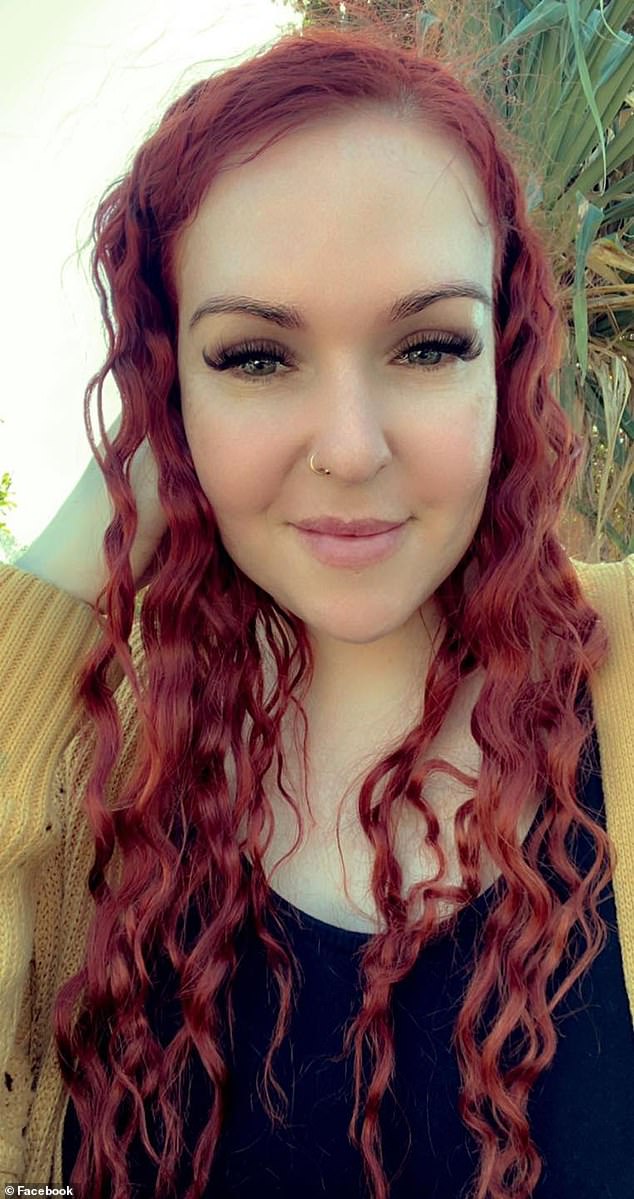 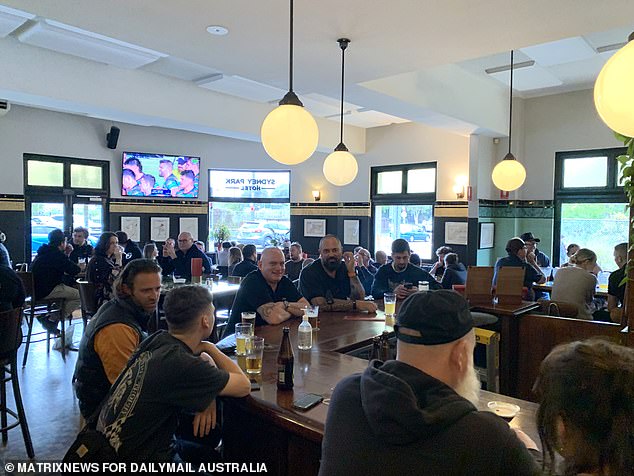 Pubs are allowed to operated under the one person per four sqm rule, but only for those who are fully vaccinated (pictured, The Marlborough in Sydney’s Newtown)

‘I am in NO way comparing the deaths of millions of people to not being allowed into Kmart, but people need to look at where that ‘them/us’ situation began,’ she said.

In Nazi Germany, the word ‘Jew’ was printed in the centre of all stars. In Ms Mills’ version, she and her children wear the badge ‘no vax’.

She previously shared a post which suggested any person who has been vaccinated and supports government mandates would have ‘turned Anne Frank over to the Nazis’.

The mother-of-three argues every person should have the right to refuse the vaccine, which they do.

The Covid vaccine is not mandatory in Australia, but there are frontline industries which require all employees to have the jab.

In NSW, where residents have endured 106 days of lockdown to stem the spread of a Covid outbreak, restrictions were tentatively lifted on Monday for the double-jabbed.

On December 6, when up to 90 per cent of eligible residents are expected to be immunised, non-vaccinated residents will be able to live freely. 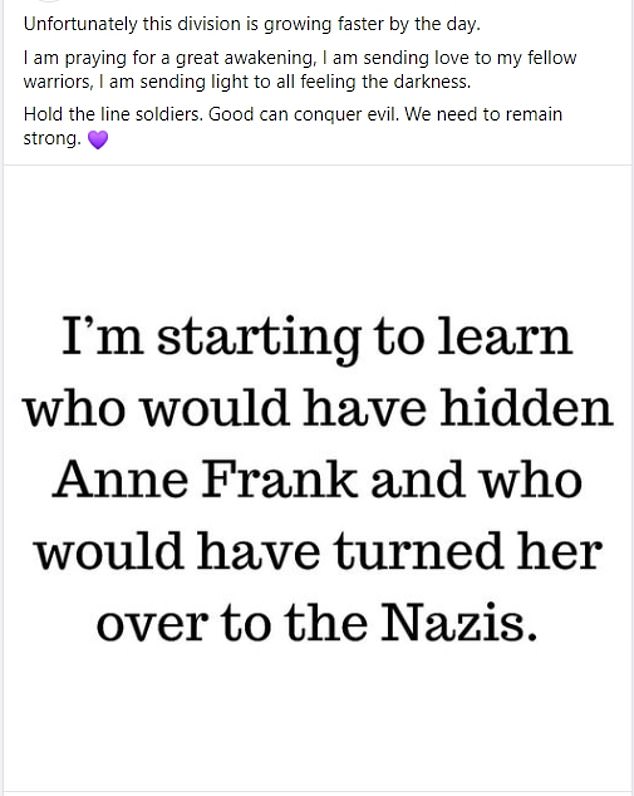 Lockdown orders on the mid north coast were lifted in early September, and Ms Mills claims that she and her family have lived relatively freely since then.

But from Monday, when lockdown lifted for the rest of the state and Sydney in particular, new rules were introduced banning the unvaccinated from restaurants, cafes, salons, shopping centres and theatres.

Dr Abramovich accused Ms Mills of using the infamous yellow star to ‘score a political point’, describing the move as ‘outrageous and abhorrent’.

‘Such foolish equations demean the murder of millions of Jews and others and are historically inaccurate and extreme. This conduct is also a spit on the memory and on the graves of those brave diggers who fought to defeat the Nazis and only serves to inflict further pain on Holocaust survivors living here,’ he said.

He is now calling on Ms Mills to apologise for the divisive post. 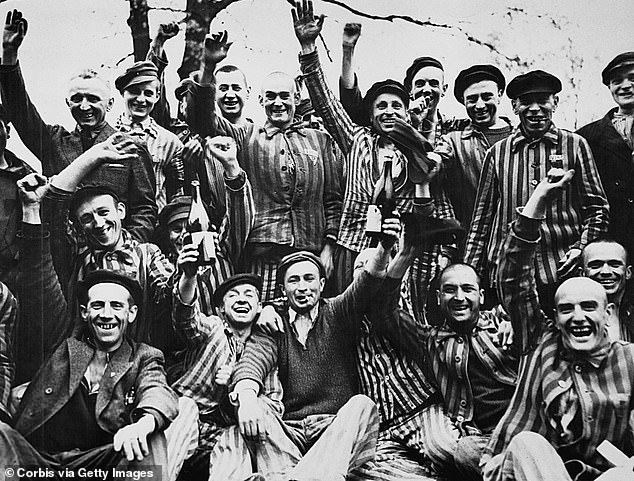 Pictured: Liberated Polish inmates from the Dachau concentration camp raise bottles of wine and celebrate. Six million Jewish people were systemically murdered by Nazis during the Holocaust while many more were displaced, tortured and discriminated against 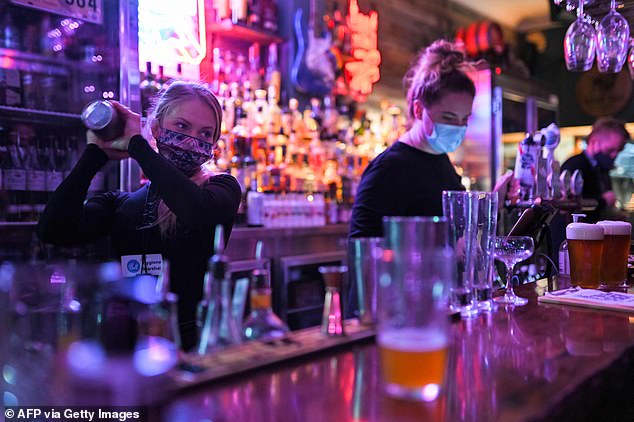