Five people are being treated for serious injuries after a car slammed into a barber shop in north east London this afternoon.

The 65-year-old driver of a white Toyota Prius reportedly smashed through the front window of Prestige Barbers, Walthamstow, injuring clients and hairdressers working inside.

Eyewitnesses in the area described hearing a ‘big bang’ and screams as the shocking scenes unfolded on Thursday afternoon.

In video footage taken from the corner of Hoe Street, Walthamstow, one woman is seen with blood dripping down her back as she sits in front of the smashed vehicle and a huge pane of shattered glass.

As the camera pans, at least two other men can be seen leaning against a wall and receiving treatment from concerned onlookers.

In a scene of chaos, broken chairs and upholstery are seen strewn across the pavement as pedestrians and local business owners rush over to offer help.

London Ambulance Service said they treated five people at the site of the crash that occurred at around 1.50pm on Thursday. Three victims were rushed to hospital as a priority. 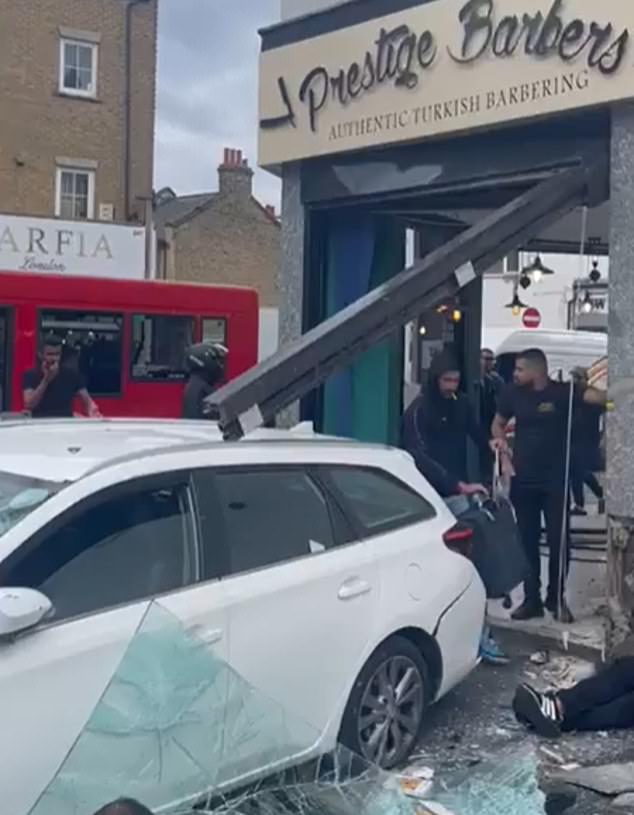 Five people are being treated for serious injuries after a white Toyota Prius slammed into Prestige Barbers, Walthamstow on Thursday

Nearby business owner Saleem Mohammad, 40, told the Evening Standard that a car went through one window ‘and straight out the other side of the shop’.

He said: ‘I heard a big bang and came out.

‘There was a woman screaming with blood coming from her face and trapped under a big piece of glass. People had to move it off her. I think she was just walking past or standing outside.

‘One of the barbers looked worst hit he wasn’t moving or saying anything.’

A Met Police spokeswoman said: ‘Officers, along with colleagues from the Ambulance Service and the London Air Ambulance Service, attended the scene and immediately provided first aid to the 65-year-old driver and others at the location.’

A London Ambulance Service spokesperson said: ‘We were called at 1.45pm today to reports of a vehicle colliding with a building on Hoe Street, E17.

‘We treated five people at the scene and took all of them to hospital, three as a priority. Our crews have now been stood down from the scene.’