Ted Cruz shot back at Jen Psaki after she mockingly called him a ‘world-renowned business, travel and health expert,’ and claimed to have been told by a ‘senior source in aviation’ that a recent onslaught of flight cancelations were the result of vaccine mandates.

Asked in a daily briefing about those who say that vaccine mandates have put a dent in the US workforce, the press secretary replied: ‘I know world-renowned business, travel, and health expert Senator Ted Cruz has made that point, but I wouldn’t say that is widely acknowledged or echoed by business leaders … by health experts …’

‘So now Biden WH is launching snarky insults from the WH press room.,’ the Texas Republican wrote on Twitter.

‘Ok, Jen, I just spoke with a very credible & senior source in aviation who told me the following – a few days ago, there was a “sick out” of air traffic controllers in Jacksonville over vaccine mandates.’

‘As a result, out of 33 air traffic controllers ONLY THREE showed up to work- That resulted in cascading flight cancellations. True or False, Jen? Or do you just do petty insults & ignore actual facts? #ThanksJoe’

Southwest Airlines canceled more than 2,000 flights over the weekend and another 363 on Monday. 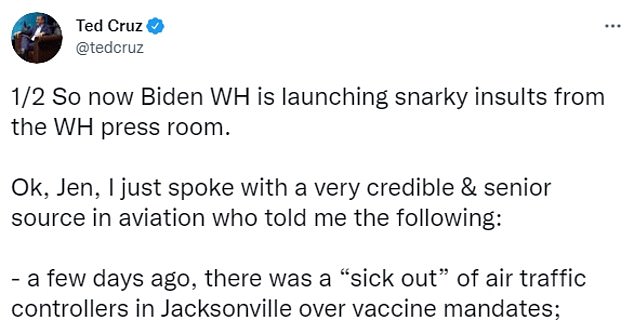 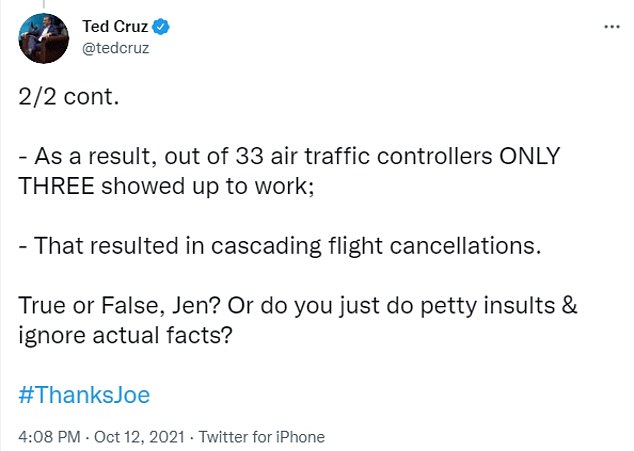 Furious passengers said that they were told in airports that the cancellations were due to Southwest employees walking out in protest at the airline’s decision to enforce COVID-19 vaccinations.

But the airline said that that was not the case, and said poor weather in Jacksonville, Florida, sparked a knock-on effect.

‘Southwest Airlines extends a tremendous apology to our Customers and Employees for the flight cancellations and delays which occurred over the weekend and on Monday,’ the airline said.

‘On Friday evening, the airline ended the day with numerous cancellations, primarily created by weather and other external constraints, which left aircraft and Crews out of pre-planned positions to operate our schedule on Saturday.

‘As a note, the operational challenges were not a result of Southwest Employee demonstrations.’

The Dallas-based airline was the only airline to report such large-scale issues over the weekend, and customers accused Southwest of not being honest with them about the delays.

The head of Southwest’s pilots union, Capt. Casey Murray, blamed the company’s management for the snafu and denied that pilots were calling out sick en masse to protest the vaccine mandate.

Murray told CBS News that the pilot sick rate was ‘right in line with what was occurring this summer.’

When asked where he would put the blame, Murray said: ‘Squarely on Southwest, I point to how they manage the network and how their IT also supports that network.

‘Once a little hiccup occurs due to the internal processes, our pilots aren’t getting to where they need to be.

‘We’ve been sounding this alarm for about four years and have seen very little approach to correcting it,’ Murray said. 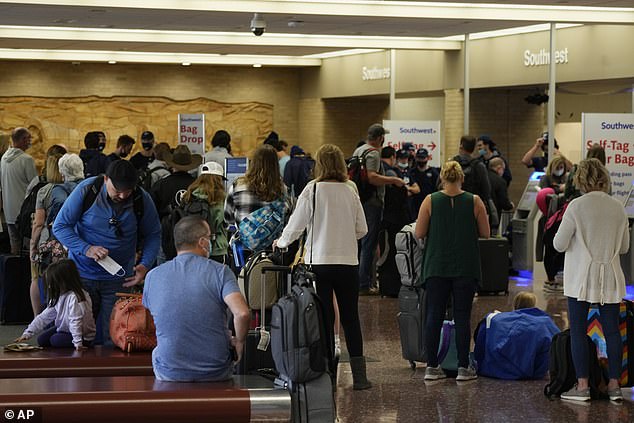 Passengers queue up at the ticketing counter for Southwest Airlines flights on Sunday in Omaha, Neb. 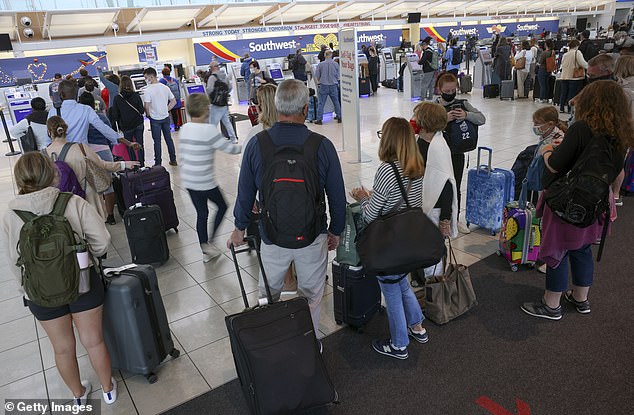 Cruz wasn’t the only Texas Republican to take heat from Psaki on Tuesday.

‘In another instance of federal overreach, the Biden Administration is now bullying many private entities into imposing COVID-19 vaccine mandates,’ Abbot wrote in an executive order.

At least several thousand people have already been fired from their jobs for refusing to comply with vaccination requirements.

The governor’s order, according to the document, also supersedes any municipal or county mandate that would allow entities to impose such mandates

He said that the mandates were ‘causing workforce disruptions that threaten Texas’ continued recovery from the COVID-19 disaster.’

‘Governor Abbott’s executive order banning mandates and, I would also note announcement by Governor DeSantis this morning essentially banning implementation of mandates fit a familiar pattern that we’ve seen of putting politics ahead of public health.’

Asked why Abbott did this, knowing that federal law supersedes state, Psaki had a one word reply: ‘Politics.’

‘I think it’s pretty clear when you make a choice that’s against all public health information and data out there it’s not based on what is in the interest of the people you are governing it’s perhaps in the interest of your own politics,’ she added when asked to elaborate.

DeSantis remarked earlier Wednesday that he could take similar action to block vaccine mandates from taking effect by shielding workers who refuse to comply from being fired.