ScotRail have offered staff a pay rise in a desperate bid to stop strikes during COP26.

The government-controlled rail operator wants to avoid disruption to the Glasgow summit next month, the prospect of which unions have called a ‘national embarrassment’.

Workers at the firm have been holding a series of strikes over pay in recent weeks, with plans to continue each Sunday between now and November 28.

But it is understood an offer has been made to staff of an initial 2.5 per cent backdated to April this year, with an additional 2.2 per cent promised in April 2022.

There is also a separate offer on the table of a £300 bonus payment to all staff for ensuring that COP26 is fully supported between October 31, and November 12. 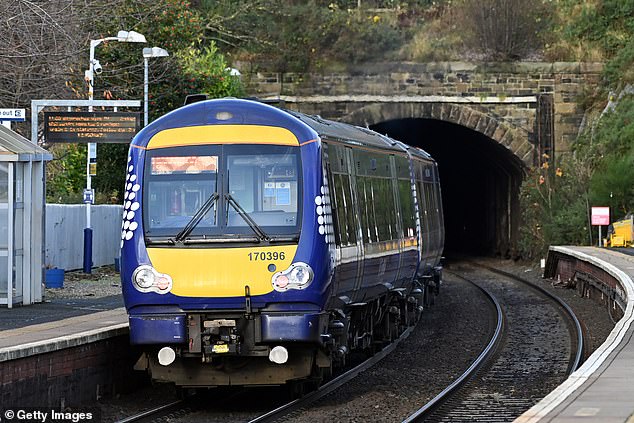 ScotRail have offered staff a pay rise in a desperate bid to stop strikes during COP26, the prospect of which unions have called a ‘national embarrassment’

It is understood the offer represents improved terms made to staff, after weeks of disruption across Scotland’s rail network.

If strikes continue as scheduled, they will occur all day on consecutive Sundays; October 31, November 7, 14, 21, and 28.

Planned strikes for October 17 and 24 have been called off while the offer is considered.

Unite says members will be balloted on the latest offer between October 13 and 25.

A spokesperson for RMT said: ‘The offer has been received, and going through normal process of being discussed by our reps across Scotland.

‘It needs to be given full consideration and will be taking whatever time is necessary before taking the right decision.

‘We’ll be issuing a further statement in due course.’

A ScotRail spokesperson said: ‘We’re seeing customers gradually return to Scotland’s Railway, but the scale of the financial situation ScotRail is facing is stark.

‘We will continue to engage with the rail trade unions to find an agreement on pay and conditions.

‘To build a more sustainable and greener railway for the future and reduce the burden on the taxpayer, we need to change.

‘All of us in the railway – management, staff, trade unions, suppliers, and government – need to work together to modernise the railway so that it is fit for the future.’