The White House passed the buck to YouTube after backlash ensued for Vice President Kamala Harris’ awkward performance alongside child actors in a video promoting kids’ interest in space.

According to a White House official, the vice president’s office did not select the children involved in the YouTube special Get Curious with Vice President Harris, a series focused on getting kids interested in space.

Harris was tasked in May with leading the Cabinet-level National Space Council.

The same few days Harris was shooting the video at the Naval Observatory, the Taliban was beginning to take over Afghanistan and the southern border was being flooded with illegal immigrants.

Questions have emerged over whether taxpayer dollars were used to fund the video and pay the children actors who appeared alongside the vice president.

The head of Entertainment Communications at YouTube did not immediately answer a DailyMail.com call requesting comment on the series.

The video, which has received a slew of criticism ranging from the vice president’s mannerisms to the fact the children were hired actors, was shot at Harris’ residence from August 11–13.

During that time the Taliban were making rapid advances across Afghanistan and were closing in on Kabul during the chaotic and bungled U.S. troop withdrawal.

Vice President Kamala Harris was filming a video about space with child actors on August 11-13, the same days the Taliban advanced their takeover of Afghanistan and as migrants continued to flood the southern border Harris’ office passed the buck when asked about hiring child actors for the video, claiming YouTube was in charge of the special Get Curious with Vice President Harris

The city of Herat, the Helmand province, and Afghanistan’s second-largest city of Kandahar all fell to the Taliban on August 13. And by that time at least 14 of Afghanistan’s 34 provincial capitals had been taken over by the Islamic militant group.

On August 15, two days after Harris wrapped filming, Afghanistan’s capital city of Kabul was overrun by the Taliban.

The month of August also saw a massive amount of encounters at the southern border with Customs and Border Protection agents coming in contact with 208,887 migrants crossing illegally from Mexico into the U.S.

Harris was named ‘border czar’ earlier this year by President Joe Biden, meaning she was putVice President Kamala Harris was filming a video about space with child-actors on August 11-13, the same days the Taliban advanced their takeover of Afghanistan and as migrants continued to flood the southern border in charge of addressing the southern border crisis.

Since taking on that role, the vice president’s office has redirected that she is aimed at addressing root causes in migrants’ home countries that cause them to flee and seek asylum in the U.S. in the first place.

In June, Harris took her first and only trip to the U.S. side of the southern border as she visited El Paso, Texas, which is hundreds of miles away from ground zero of the border crisis in the Rio Grande Valley.

Instead of addressing the border crisis or growing threat in Afghanistan as the Taliban took over the country, in mid-August Harris was filming a promotional video called Get Curious with Vice President Harris, a series focused on getting kids interested in space.

This series is part of Harris’ role heading the Cabinet-level National Space Council.

Grinning school-age children who took part in a NASA YouTube video about space exploration with Harris were revealed to be child actors on Monday.

The video, filmed in August and tweeted out by the Vice President on October 7, celebrates World Space Week.

It appeared to viewers that the children she was with were all normal American kids.

However it has now been revealed that they are paid actors from Canadian media company who auditioned by sending in a monologue and three questions they would ask a world leader.

Critics of Harris have leapt on the video, with the mockery compounded by the revelation that it was produced by Canadian company ‘Sinking Ship Entertainment’.

Monterey resident Trevor Bernardino, 13, told KSBW he was stunned when he learned he would be traveling to Washington, DC to take part in the video.

‘Then after that, like a week later my agent called me and was like ‘Hey Trevor you booked it,’ he told the network.

Trevor was one of five teens who participated in the video for the YouTube original series. He was joined by Derrick Brooks II, another child actor, Emily Kim, likewise a child actor, Zhoriel Tapo, a child actor and aspiring journalist who has interviewed former First Lady Michelle Obama, and Sydney Schmooke.

It was revealed on Tuesday that not only did a NASA YouTube video about space exploration with VP Kamala Harris include child actors, but it was produced by a film company called ‘Sinking Ship Entertainment’.

The production company, based in Toronto, was founded in 2004 and describes itself of its website as a ‘globally renowned and industry leading Production, Distribution, VFX and Interactive studio specializing in children’s and family content.’

Executive producer J.J. Johnson and friends Blair Powers and Matt Bishop founded the company at University, and came up with the name when a classmate warned joining their project would be like ‘joining a sinking ship’.

Speaking to the Toronto Star in 2017, the group said ensuring their shows have diverse characters is an important part of their work.

‘Sometimes (kids) want to see more of themselves reflected on screen and they are not getting that in the demographic that they are assigned to on the TV,’ Powers told The Star at the time.

After the name of the production company was revealed by the Washington Examiner, many were quick to poke fun at the Vice President.

Christopher Cadelago, a reporter for Politico who covers the White House and Harris, wrote: ‘Not the point, but an unfortunate name to throw around politicians.’

As well as misleading viewers, Kamala has also been criticized for her wide-eyed exclamations about the wonders of space in the video.

‘I just love the idea of exploring the unknown,’ Harris gushed dramatically to the five child actors in the Naval Observatory, where the vice president’s residence is located.

Tucker Carlson called the video ‘fake’ and ‘fraudulent’ while talking about it with fellow conservative Candace Owens on his talk show tonight on Fox News.

‘So for humanitarian reasons we are not going to play that’ll video, but it’s online,’ Carlson said. ‘If you dare, look it up, watch it. Watch it again, watch your own soul die as you do. It’s the fake is thing that’s ever been caught on video but in fact it’s even faker than it looks.’

He then ripped into Harris for hiring child actors instead of recruiting kids who are passionate about the space industry.

‘We just learned that one of the kids that Kamala Harris was lecturing at is in fact not a normal kid, he’s a child actor called Trevor who auditioned for that role,’ Carlson said.

‘No political party that believed in democracy and thought it had to win over voters whatever put up someone like Kamala or Kamala Harris for office.’ 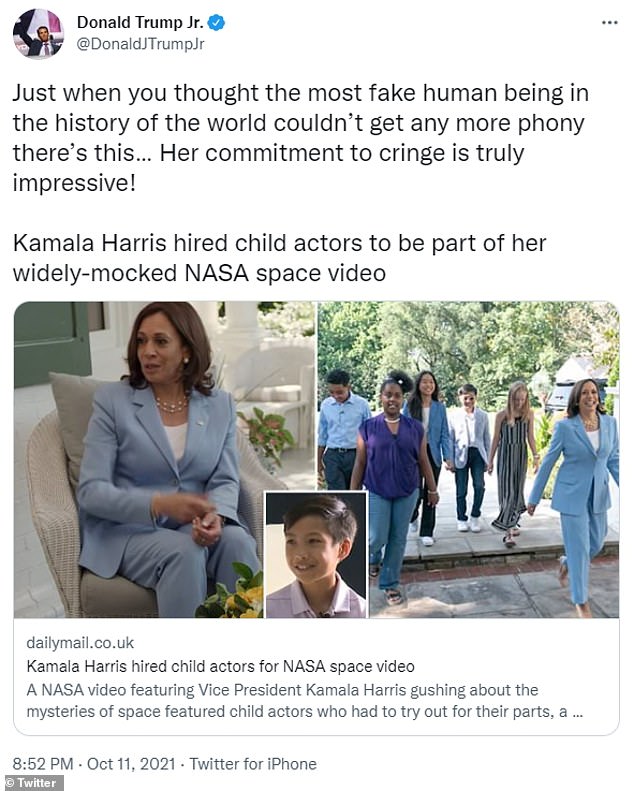 Other conservatives also took to Twitter to rib the vice president for over-the-top enthusiasm with the children.

At one point in the video, Harris suddenly became enthusiastic with wide-eyed wonder over what her visitors would see through the Naval Observatory’s high-tech telescope.

‘You guys are gonna see, you’re gonna literally see the craters on the moon with your own eyes!’ she enthused, pointing to her own peepers for emphasis — even though its craters can be seen with the naked eye. 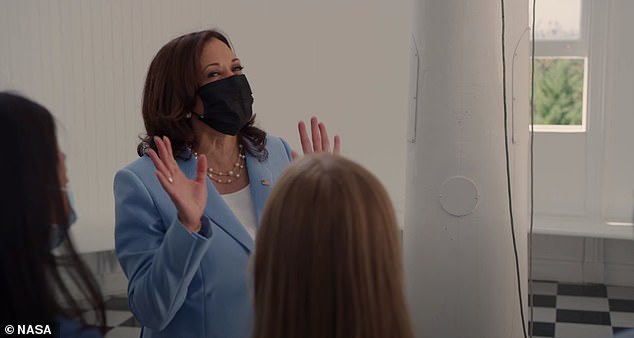 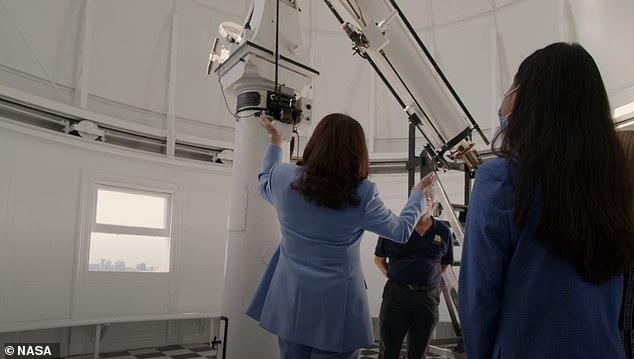 The video, which by Monday had received some 114,000 views on YouTube, as well as 2,000 likes and 4,100 dislikes, was shared online by the vice president’s aides and supporters

Harris, who is the chair of the cabinet-level National Space Council since May, also struggled to identify reasons for space exploration, earlier in the video.

‘There’s other things that we just haven’t figured out or discovered yet,’ she said before rambling on, ‘to think about so much that’s out there that we still have to learn, like, I love that.’

The video, which by Monday had received some 114,000 views on YouTube, as well as 2,000 likes and 4,100 dislikes, was shared online by the vice president’s aides and supporters. Comments have been disabled. 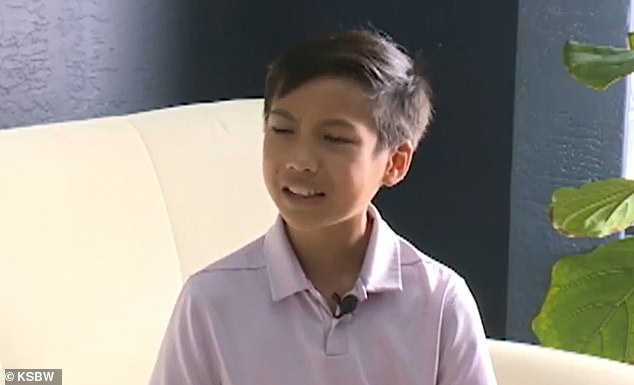 Monterey resident Trevor Bernardino, 13, told KSBW how he had to try out for the part 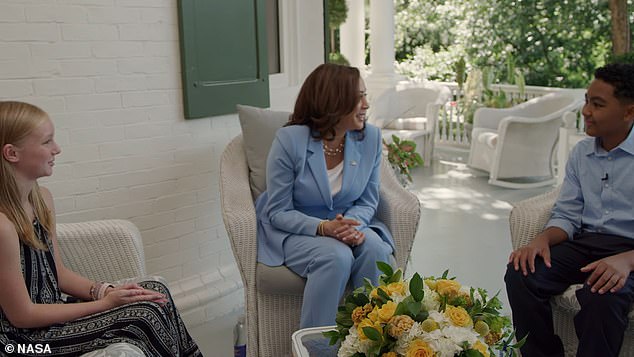 ‘You’re going to literally see the craters on the moon with your own eyes!’ Harris said during the video

For his part, Bernardino was thrilled with meeting Harris.

‘The most exciting part was definitely meeting Vice President Harris,’ he said. ‘She just sat us down. She is super charismatic. She’s everything that I ever thought of her, plus more. She made me feel like one of her peers, and at the time I felt super important. I was talking to her face to face.’

‘Me, my mom, dad, we were speculating who could be this important that we meet them in D.C. and we get to go on cool trip and film,’ Bernardino said, describing how he ended up being included in the video.

‘Are you kidding me…the head of the space council is the vice president!’ says one of the kids in the video as they realize they would be meeting with Harris.

May: Harris tweeted a picture of herself smiling with the caption, ‘Enjoy the long weekend’ the Friday before Memorial Day.

After facing a barrage of criticism that she was ignoring the somber occasion, Harris tweeted a number of tributes to fallen service members.

June: Harris handed out cookies to reporters on Air Force Two that were decorated with her own face.

Critics slammed the bizarre cookies as ‘narcissistic’ but an aide later explained that they were a ‘gift’ to Harris from a staffer that the VP wanted to share.

June: Harris snapped at NBC News anchor Lester Holt when he asked why she had not yet visited the border, despite being appointed Biden’s border czar.

‘And I haven’t been to Europe,’ she responded.

August: Harris drew criticism for laughing awkwardly when a reporter questioned her on the chaotic US withdrawal from Afghanistan.

Observers have noted that Harris has a tendency to chuckle when faced with uncomfortable questions.

September: Harris came under fire after she spent a Saturday morning at the coin toss at Howard University instead of dealing with the border crisis where the number of Hiaiti migrants camping underneath a Texas bridge swelled to more than 14,000.

Harris has been tasked by President Joe Biden to deal with the overwhelming number of illegal migrants crossing into the United States but instead made a surprise visit to her alma matter.

Many on Twitter were quick to criticize the vice president’s appearance after her work earlier in the summer traveling to the boarder to assess the immigration situation amid the pandemic.

Wasn’t she in charge of the border,’ one user with the handle Naty wrote.

Another user with the name Buzz Knudson wrote, ‘I seem to remember soooooomeone was in charge there right?’

September: Kamala angers supporters of Israel by expressing support for a college student who accused the country of ‘ethnic genocide’ against Palestinians.

The interaction came as Harris made a surprise visit to a political science class at George Mason University in northern Virginia to encourage voter registration and discuss voting rights.