Gabby Petito was killed by strangulation, the autopsy results revealed Tuesday – as her fiance Brian Laundrie spends his fourth week on the run from law enforcement.

The coroner previously ruled the manner of Petito’s death a homicide but the cause of her death was not disclosed, pending further autopsy results.

In Wyoming, homicide includes varying degrees of murder and manslaughter and so the circumstances of her death were a mystery.

Petito’s body was discovered in a campsite close to the Grand Teton National Park in Wyoming on September 19 – eight days after her family reported her missing and 22 days after the last reported sighting of her alive. 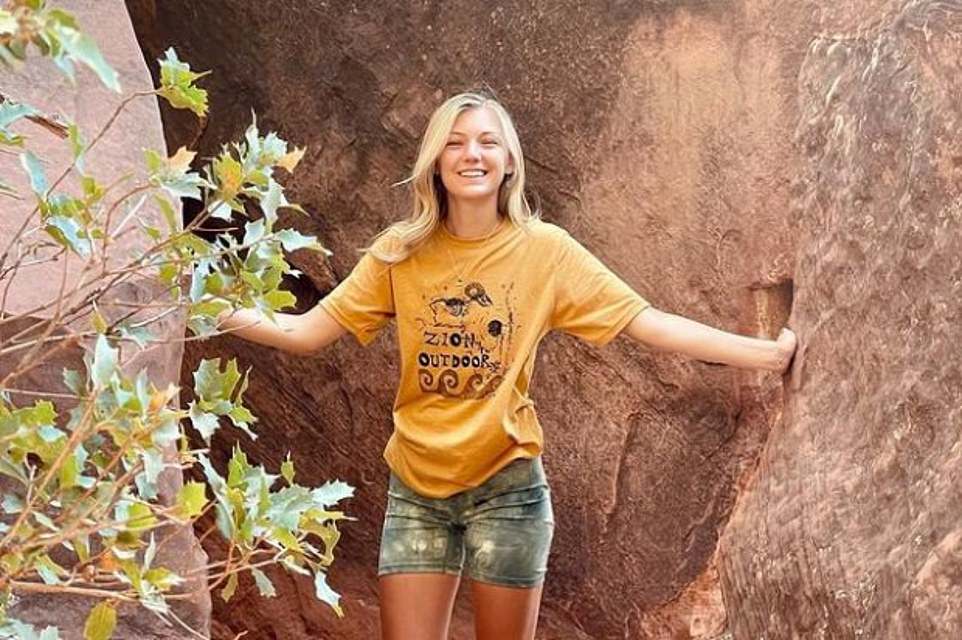 Teton County Coroner Dr. Brent Blue gave an update on the autopsy for Gabby Petito, 22, (pictured) in a briefing Tuesday 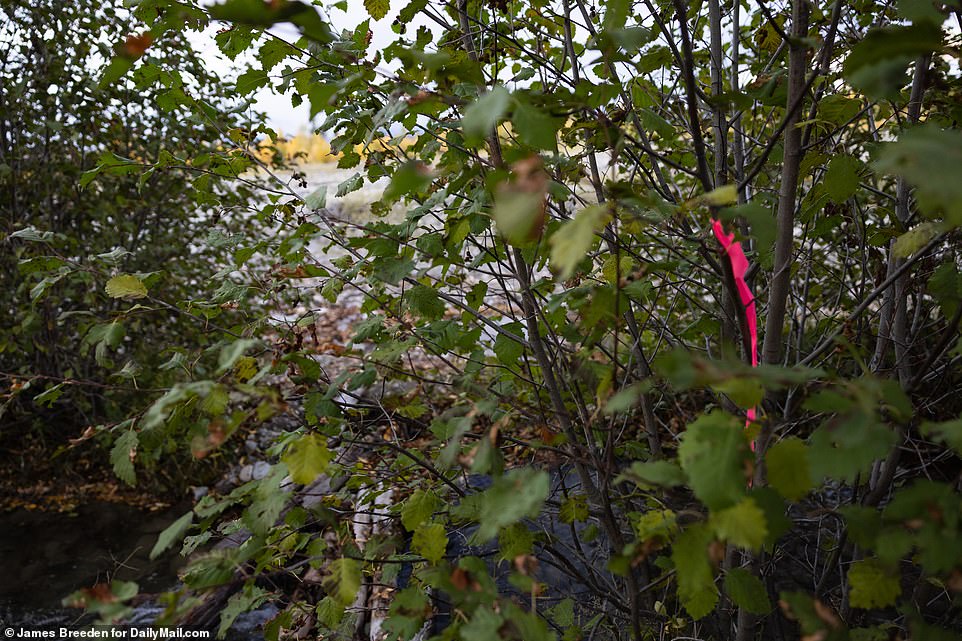 The FBI has been focusing its investigation around the belief she was killed between August 27 and August 30.

The last reports of Petito being seen alive were on August 27 when witnesses said they saw the couple involved in a ‘commotion’ in a restaurant in Wyoming.

That same day, Petito’s mom Nichole Schmodt received an ‘odd’ text message from her daughter’s phone where she referred to her grandfather as ‘Stan’ – sending alarm bells that something was wrong.

Laundrie, 23, allegedly used Petito’s stolen bank card to spend around $1,000 between August 30 and September 1 and returned to his family’s home in North Port, Florida, on September 1.

Laundrie is the sole person of interest in his fiancee’s disappearance and death but has not yet been charged in connection with it.

It is not clear if he is even still alive to potentially face charges.

A warrant was issued for his arrest on September 23 over the stolen Capitol One Bank card. The attorney for Petito’s family said last week the card belonged to her.

Petito set off on a once in a lifetime four-month-long trip with Laundrie on July 2, traveling across America in the couple’s white campervan and documenting their adventures on YouTube.

On September 1, Laundrie returned to his family’s home in North Port, Florida, without his fiancee but driving their van.

Laundrie did not report her missing and, in the days that followed, he and his parents allegedly ignored her concerned family’s pleas for information about her whereabouts. 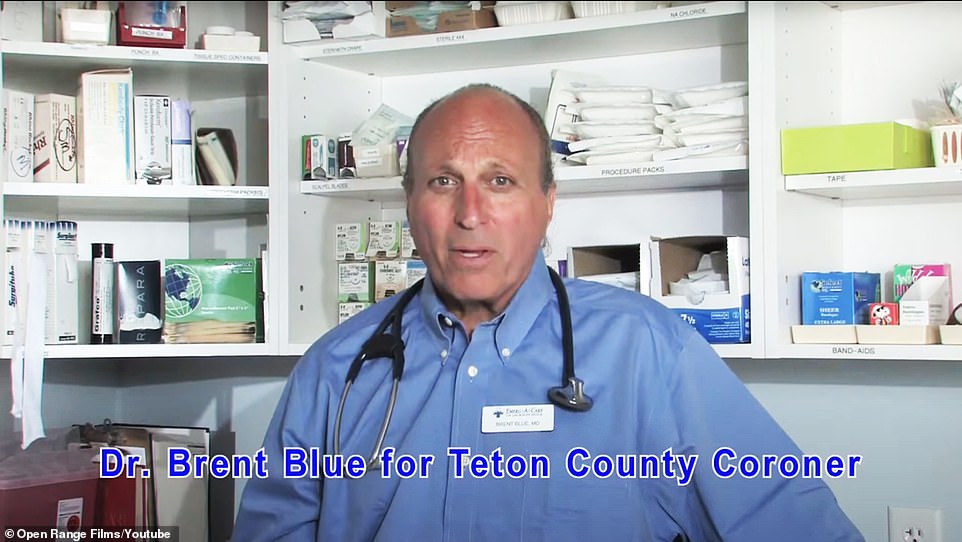 Teton County Coroner Dr. Brent Blue (pictured) previously ruled the manner of Petito’s death a homicide but the cause of her death was pending further autopsy results 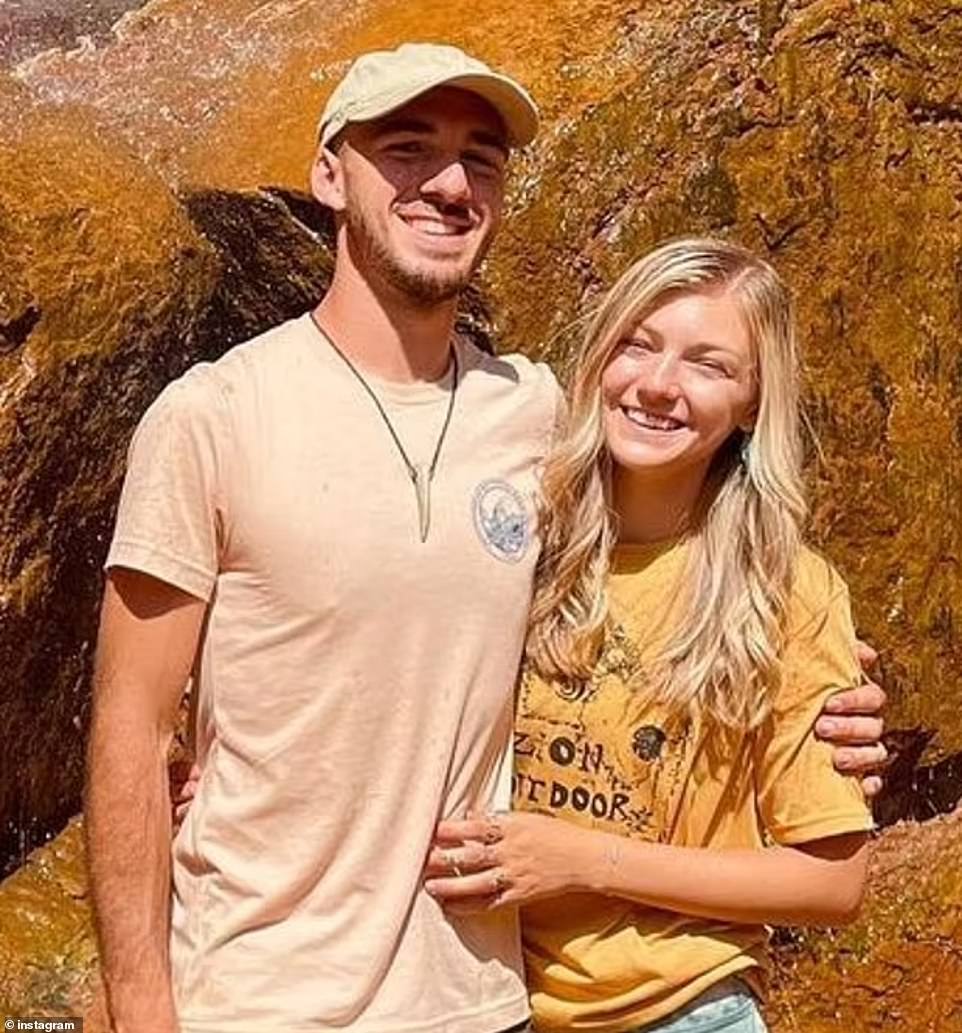 Brian Laundrie and Gabby Petito. He has been on the run for more than three weeks following their doomed campervan trip

Petito was reported missing on September 11 by her mom and police visited the Laundrie’s home.

But the Laundrie family lawyered up and refused to let cops speak to the 23-year-old about his fiancee’s whereabouts.

Their version of events has changed in the weeks that followed – first telling authorities Laundrie had left their home to head to the Carlton Reserve nature park on September 14 and didn’t return.

Now, the fugitive’s parents have claimed they actually ‘believe’ Laundrie set off from their home one day earlier on September 13, meaning he had a four-day headstart before they finally reported him missing to authorities.

The exact timing of when Laundrie went on the run is not clear.

Police revealed last week that they did not see or speak to Laundrie at all after Petito was reported missing.

It is not clear if authorities have any evidence of Laundrie even being at the family home prior to September 13. 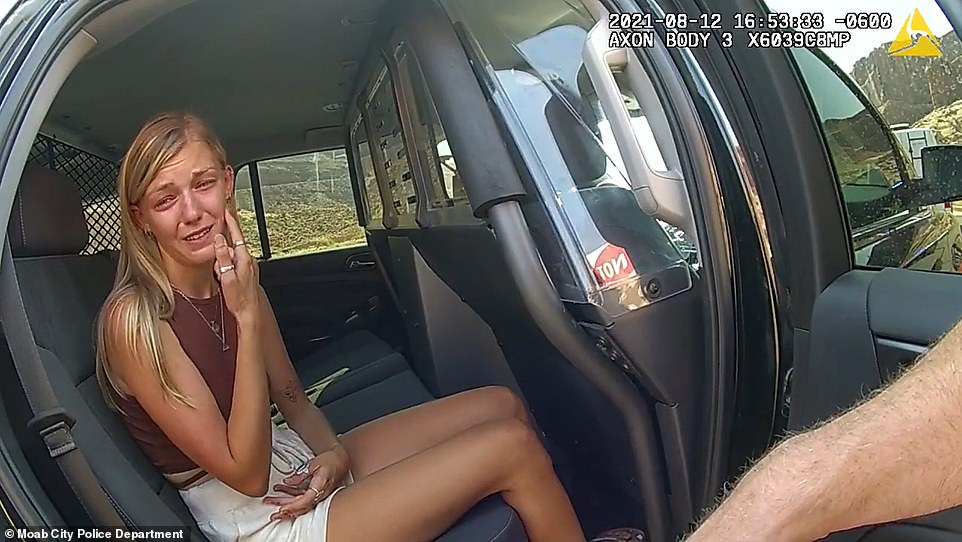 The young couple were stopped by police in Moab, Utah, back on August 12 after a witness reported seeing a man slapping a woman. Bodycam footage showed Gabby Petito telling cops Brian Laundrie had hit her 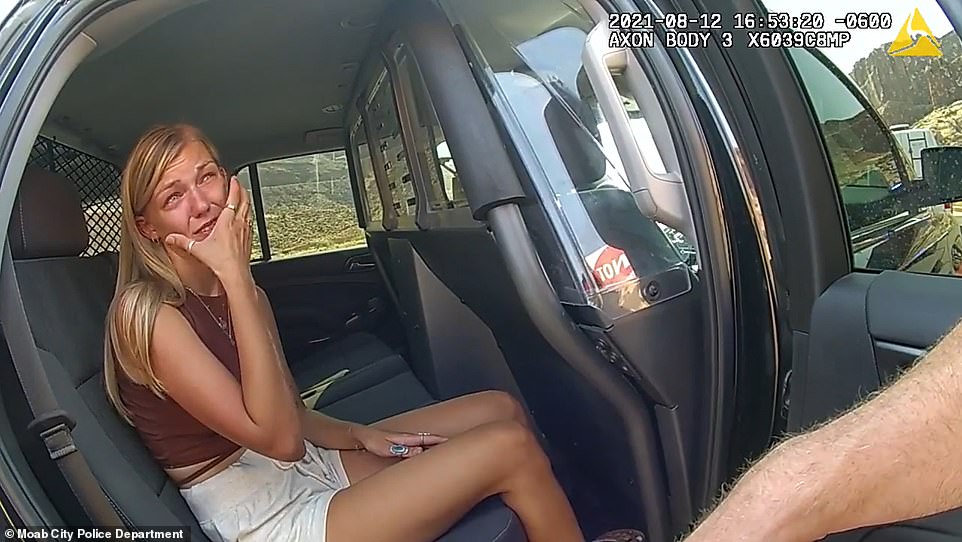 The video shows a cop pointing out ‘new’ marks on Petito’s face and arm and asking if Laundrie had hit her, to which she replies: ‘I guess’ 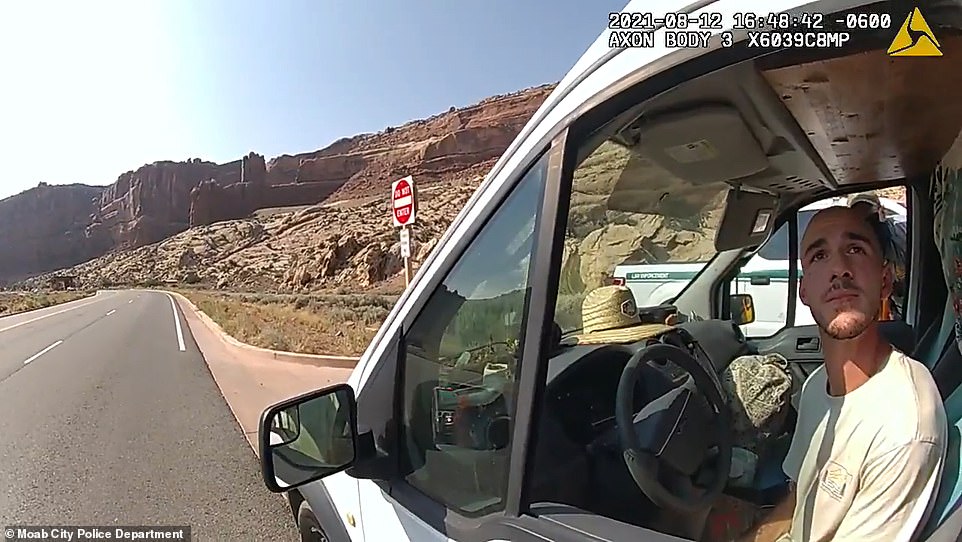 Meanwhile, Laundrie instantly defends himself and pushes the blame onto Petito as soon as the cop arrives on the scene

The young couple were stopped by police in Moab, Utah, back on August 12 after a witness reported seeing a man slapping a woman outside a grocery store before driving off in a white van.

Bodycam footage has revealed Petito told cops Laundrie had hit her and cut her face by grabbing her ‘with his nail’.

The video shows a cop pointing out ‘new’ marks on Petito’s face and arm and asking if Laundrie had hit her, to which she replies: ‘I guess.’

‘He like grabbed me with his nail, and I guess that’s why it looks, I definitely have a cut right here. I can feel it, when I touch it it burns,’ she tells the officer.

The 22-year-old quickly backtracks and defends her fiance saying she ‘hit him first’ when he locked her out of their van and refused to let her in.

Laundrie meanwhile instantly defends himself and pushes the blame onto Petito for the altercation as soon as the cops arrive on the scene.

He claims Petito was ‘really worked up’ and that he ‘was just trying to push her away’ when asked about allegations he had hit her.

Bodycam footage from one Moab officer was released when Petito was still a missing person, showing Petito telling the officer she slapped Laundrie, while he is seen showing the cop scratches on his face and arm, which he claims were caused when she ‘hit me with her phone’. 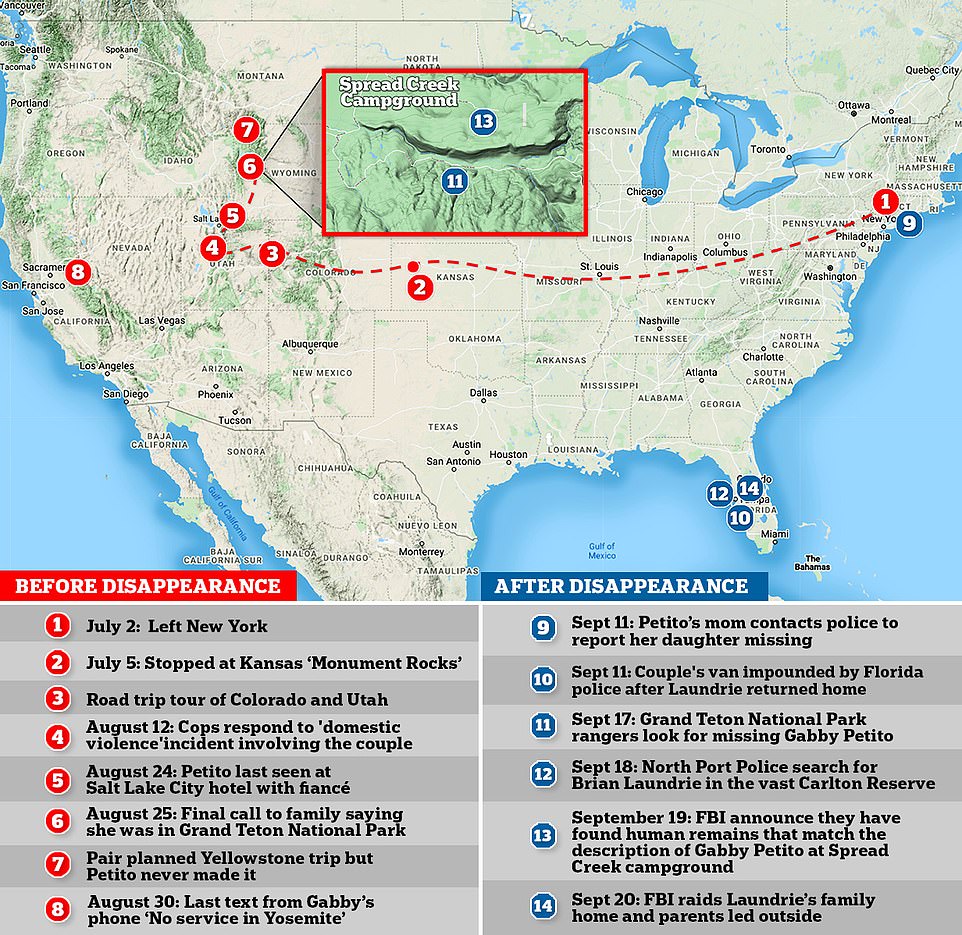 The pair had been traveling on a cross-country trip together since July 2, when they left New York. Petito was reported missing on September 11

A second officer’s camera was released on September 30, with some of the previous inaudible comments by the couple revealed for the first time.

The cops determined Petito was ‘the primary aggressor’ and separated them for the night.

The domestic incident less than two weeks before she was last seen alive.

A probe has been launched into the police handling of the August 12 incident and Moab City Police Department Chief Bret Edge has since taken a leave of absence pending the investigation.

Meanwhile, the manhunt for Laundrie has entered its fourth week with the search continuing to focus on the Carlton Reserve, close to the Laundrie family home.

Laundrie’s dad Christopher joined the search last Thursday as his family continues to face mounting scrutiny over what they know.

The FBI is also investigating 11 alleged sightings of Laundrie along the Appalachian Trail near the North Carolina-Tennessee border.