Jon Gruden has always been a ‘fraud’ and a ‘used car salesman,’ according to retired NFL star Keyshawn Johnson, who played two seasons for the embattled former coach with the Tampa Bay Buccaneers.

Gruden stepped down as head coach of the Las Vegas Raiders on Monday after racist, homophobic, and misogynistic emails of his surfaced during an NFL investigation into the workplace culture of the Washington Football Team.

Johnson, who played four seasons with the Buccaneers and won a Super Bowl under Gruden at the end of the 2002 season, ripped his former coach on his ESPN Radio show, ‘Keyshawn, JWill & Max.’

Specifically, the three-time Pro Bowl selection accused Gruden of building his reputation on a Super Bowl-caliber team that he inherited from Tony Dungy, whom Gruden replaced after the 2001 season. 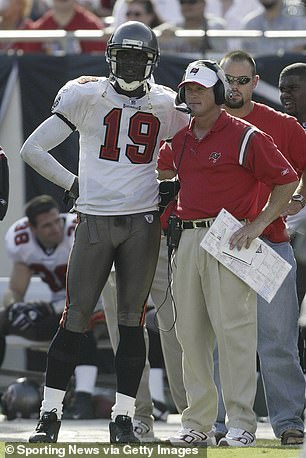 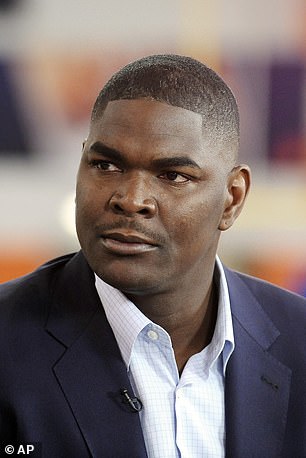 Jon Gruden (near left) has always been a ‘fraud’ and a ‘used car salesman,’ according to retired NFL star Keyshawn Johnson (right, far left), who played two seasons for the embattled former coach with the Tampa Bay Buccaneers. Johnson, who played four seasons with the Buccaneers and won a Super Bowl under Gruden at the end of the 2002 season, ripped his former coach on his ESPN Radio show, ‘ Keyshawn, JWill & Max .’ Specifically, the three-time Pro Bowl selection accused Gruden of building his reputation on a Super Bowl-caliber team that he inherited from Tony Dungy, whom Gruden replaced after the 2001 season

‘From day one, he’s been a used car salesman,’ Johnson said. ‘And people bought it because he inherited a championship team built by Tony Dungy and [then-Bucs general manager] Rich McKay, and he came in there with a little bit of different energy than we had with Tony, and it kind of kicked us over the top to get our world championship, which I am grateful for.

‘But at the same time, I also saw through who he was through that journey of getting a championship.’

It was a rapid downfall for Gruden, who is in the fourth year of a 10-year, $100 million contract he signed with the Raiders in 2018.

It started on Friday when The Wall Street Journal reported that Gruden used a racist term to describe NFL union chief DeMaurice Smith in a 2011 email to former Washington executive Bruce Allen. Gruden was an ESPN television analyst at the time.

The 58-year-old stepped down Monday night after The New York Times reported that he frequently used misogynistic and homophobic language directed at Commissioner Roger Goodell and others in the NFL.

Tirico said on NBC’s ‘Football Night in America’ on Sunday that he had not seen or experienced anything with Gruden that was racist in any way.

‘The comments made Sunday on ”Football Night in America” were specific to Jon Gruden’s email related to DeMaurice Smith and addressed my personal experiences with Jon regarding any racist actions or behaviors. As I said on air, his ‘comments are wrong’,’ Tirico said in a statement released to The Associated Press.

‘The content and nature of the subsequently released emails is deplorable, disappointing and express sentiments that have no place in our society.’

Tirico worked with Gruden from 2009 through 2015. Gruden remained with ESPN until he was hired by the Raiders in 2018.

Dungy also said on Sunday’s show he didn’t think Gruden’s emails about Smith had racial undertones but that it was an inappropriate attack on a man’s character. Dungy said on social media Monday night after more emails came out that the Raiders did the appropriate thing in moving on from Gruden.

‘That being said, if Jon Gruden shows TRUE remorse-and more importantly changes his mindset and actions-I would forgive him,’ Dungy said on Twitter. ‘As Christians that’s what the Bible commands us to do because that’s what God does for us. I know that’s not popular, but it’s biblical.’

The emails were discovered in a workplace misconduct investigation into the Washington Football Team but ended up costing Gruden his job when they also showed Gruden denounced the drafting of a gay player and the tolerance of players protesting during the playing of the national anthem among other issues.

Gruden apologized for his “insensitive remarks” about Smith, saying they were made out of frustration over the 2011 lockout. But the latest emails sent from between 2011-18 when Gruden was an analyst for ESPN show his use of derogatory language went well beyond that.

A league source confirms the accuracy of the emails and said they were sent to the Raiders last week. The person spoke on condition of anonymity because the league hasn’t made the emails public.

It is not known if the league plans to release any of its findings about the WFT or Snyder. A league spokesman did not respond to DailyMail.com’s inquiries on the subject.

The NFL has fined the WFT $10 million and Snyder has stepped away from day-to-day operations.

The investigation revealed that ownership and senior officials paid little attention to sexual harassment and other workplace issues. NFL special counsel for investigations Lisa Friel described it as a culture of fear.

‘The culture at the club was very toxic and fell short of the NFL’s values and we hold ownership to a higher standard,’ Friel said.

Lisa Banks and Debra Katz, attorneys representing 40 former WFT employees who came forward to testify against the club, are now calling for the NFL to release its findings of its investigation.

‘It is truly outrageous that after the NFL’s 10-month long investigation involving hundreds of witnesses and 650,000 documents related to the longtime culture of harassment and abuse at the Washington Football Team, the only person to be held accountable and lose their job is the coach of the Las Vegas Raiders,’ read the statement from Katz and Banks.

‘If the NFL felt it appropriate to release these offensive emails from Jon Gruden, which it obtained during its investigation into the Washington Football Team, it must also release the findings related to the actual target of that investigation. Our clients and the public at large deserve transparency and accountability. If not, the NFL and Roger Goodell must explain why they appear intent on protecting the Washington Football Team and owner Dan Snyder at all costs.’

Raiders owner Mark Davis said last week that the email about Smith was “disturbing and not what the Raiders stand for” and said the team was reviewing the additional emails. Davis issued a statement Monday saying only that he accepted Gruden’s resignation.

The Times reported that Gruden used a gay slur to insult Goodell and said he was “clueless” and “anti-football.” He also said Goodell shouldn’t have pressured the Rams to draft “queers,” a reference to Michael Sam, who was the first openly gay player drafted by an NFL team.

Raiders defensive end Carl Nassib came out as gay in June and is the first openly gay player to appear in an NFL game.

In a 2017 email, the Times said Gruden responded to a sexist meme of a female official by saying: “Nice job roger.”

The paper also said Gruden criticized Goodell and the NFL league for trying to reduce concussions, and said that Eric Reid, a player who had demonstrated during the playing of the national anthem, should be fired.

The newspaper said Gruden also mocked an article in 2017 about players calling on Goodell to support their efforts promoting racial equality and criminal justice reform.

“He needs to hide in his concussion protocol tent,” Gruden wrote.

Gruden and Allen have a long relationship, having worked together in Oakland and Tampa Bay. The emails between the two and other men included photos of women wearing only bikini bottoms, including one photo of two Washington team cheerleaders.

Smith said earlier Monday that he appreciates that Gruden reached out to him following the initial report, but that the email is evidence that the fight against racism is ongoing.

“But make no mistake, the news is not about what is said in our private conversation, but what else is said by people who never thought they would be exposed and how they are going to be held to account,” Smith wrote in a Twitter thread.

Gruden’s comments to Allen about Smith came during the 2011 lockout of the players by the NFL. Gruden told the Wall Street Journal he was angry about the lockout during labor negotiations and he didn’t trust the direction the union was taking.

“Dum­b­oriss Smith has lips the size of michellin tires,” Gruden wrote in the email re­viewed by the newspaper.

Davis had been trying to hire Gruden almost since he took charge following the death of his father, Al, in 2011. He finally got his prize in 2018 when Gruden agreed to leave ESPN and return to the sideline with a 10-year contract. Gruden had revived the Raiders in is first stint in 1998-2001 and then beat them in the Super Bowl the following season after he was traded to Tampa Bay for a boatload of draft picks.

Gruden has a 117-112 career record but hasn’t won a playoff game since the Super Bowl victory over the Raiders in the 2002 season.

His second tenure with the team started with a pep rally introductory news conference but provided few reasons for celebration as Gruden had a 22-31 record, failing to reach a winning record or make the playoffs.

He traded away stars Khalil Mack and Amari Cooper in his first season to start a rebuild, which has showed only minor progress. After the Raiders went 4-12 in his first season, Gruden tried to make a push in 2019 in the team’s final season in Oakland by spending heavily in free agency and trading for star receiver Antonio Brown. But Brown was cut before the season after a series of run-ins with management, and the Raiders went 7-9.

They improved to 8-8 last season and got off to a promising 3-0 start this year before losing the past two games.

Bisaccia has been a special teams coordinator in the NFL for 19 seasons with the Raiders, Chargers, Dallas and Tampa Bay. He has no head coaching experience but his elevation will allow other assistants such as defensive coordinator Gus Bradley to stay in their current roles.