California Governor Gavin Newsom has lavished praise on Tesla founder and CEO  Elon Musk calling him ‘one of the world’s great innovators and entrepreneurs’ just hours after taking a parting shot at the entrepreneur and business magnate who plans to move the headquarters to Texas.

‘I mean what an extraordinary, extraordinary talent,’ Governor Newsom said at a bill-signing ceremony in Oakland on Friday afternoon where he thanked Musk and Tesla for investing in California.

California is the state where the company was created and opened its first factory. 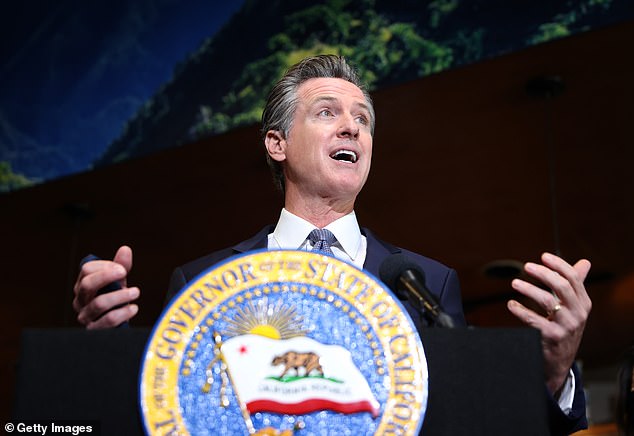 California Governor Gavin Newsom, pictured on Friday in Oakland, has praised Elon Musk describing him as an ‘extraordinary, extraordinary talent’ 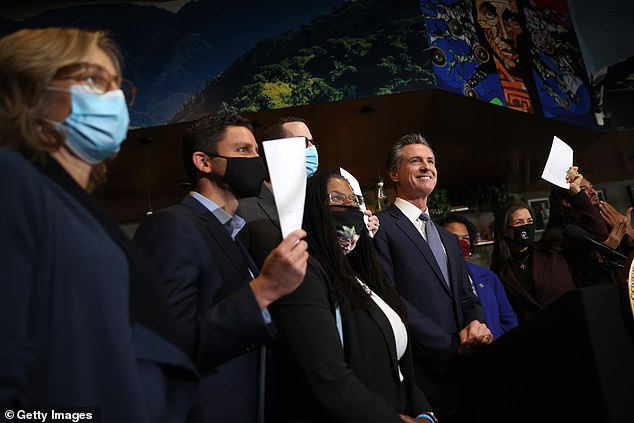 Musk promised the company would expand its operations in California, despite announcing it was moving its headquarters from Palo Alto, California to Austin.

He said California deserved some of the credit for Tesla’s success, having given the  company ‘hundreds of millions of dollars’ in tax breaks and developing policies to encourage electric cars.

But just hours earlier, on Thursday, Newsom’s office made a cutting remark at the electric vehicle company Musk’s announcement of plans to relocate Tesla’s HQ with a spokeswoman for the governor stressing that California would ‘stand up for workers, public health and a woman’s right to choose’, referencing Texas’s ban on abortion after the first six weeks.

She added the Golden State was still ‘home to the biggest ideas and companies on the planet.’

But former San Diego mayor Kevin Faulconer tweeted: ‘Until we change the policies that are driving companies away we’re going to continue to lose jobs and disrupt California families. We’ve got to do better.’

Musk said that Tesla, which has been in Silicon Valley since 2003, has outgrown its Fremont factory after more than a year of infighting with local and state officials over COVID mandates and high taxes.

‘It’s like we’re spam in a can here,’ he said, adding that there’s sparse affordable housing and a lot of workers have a long commute. 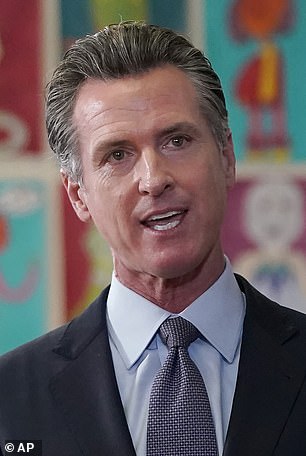 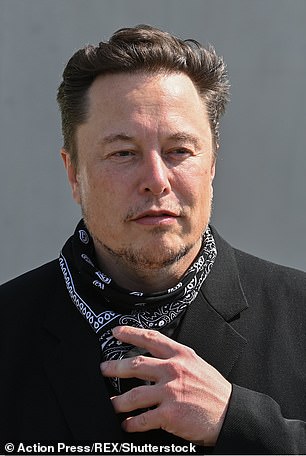 Elon Musk, right, confirmed Thursday that Tesla will be moving its headquarters from Palo Alto, California, to Austin, Texas. Newsom had initially criticized the move amid controversy over the Lone Star State’s law banning abortions after six weeks 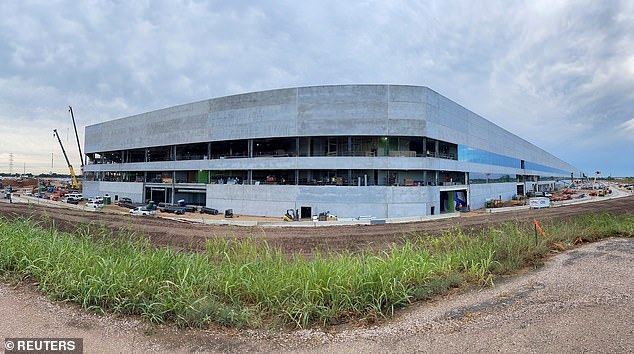 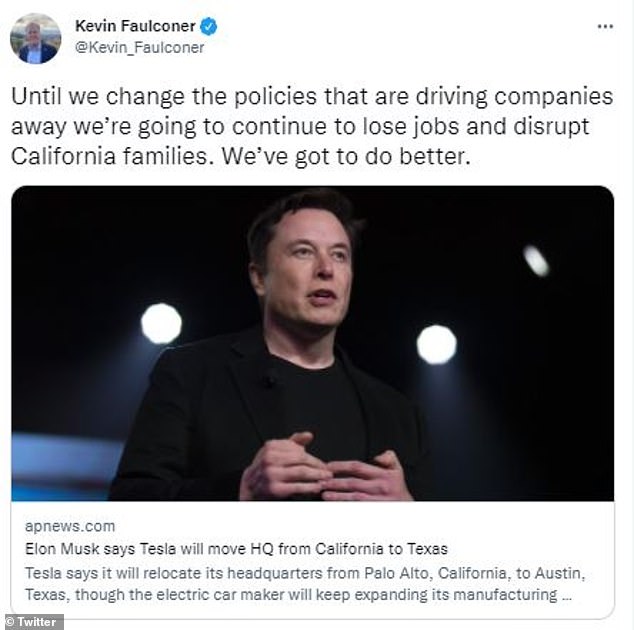 Tesla’s move to Texas follows through on a promise he first made over a year ago in response to the Golden State’s strict COVID guidelines.

Many also took to Twitter to criticize Tesla’s move amid the Texas abortion law.

The Texas law leaves enforcement solely up to private citizens, who are entitled to collect $10,000 in damages if they bring successful lawsuits against not just abortion providers who violate the restrictions, but anyone who helps a woman obtain an abortion.

Hundreds of marches took place last week in opposition to the law, which was recently blocked by a federal judge.

Twitter user Jo Ann Aaronson wrote, ‘Moving right into a state that is trying to ban abortions. Just lost all respect for Tesla and Elon Musk.’

Another Twitter user with the handle lupin wrote, ‘If anything would make me move out of Texas, it’s news that Musk is setting up shop there.

‘Texas does not need one more person with ‘I’m the center of the universe’ syndrome.’

People took to Twitter to criticize Tesla’s move to Texas 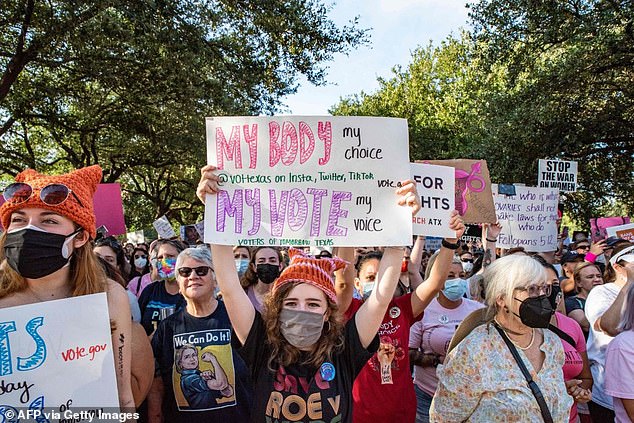 Others also came out to defend Musk, criticizing California’s strict COVID mandates and high taxes for sending Tesla away.

One twitter user with the handle mkypwr23 wrote, ‘Musk ain’t no fool he knows he can’t trust the state of California anymore.’

Musk noted that while headquarters were moving to Texas, Telsa’s manufacturing plants would stay and grow in California.

‘Just to be clear though, we will be continuing to expand our activities in California, so this is not a matter of Tesla leaving California,’ he noted, adding that the company plans on increasing output in California and Nevada by 50 percent.

Tesla also recently began working on a ‘megafactory’ in Lathrop, California, where it will produce Megapacks, an energy-storage product, Bloomberg reports. 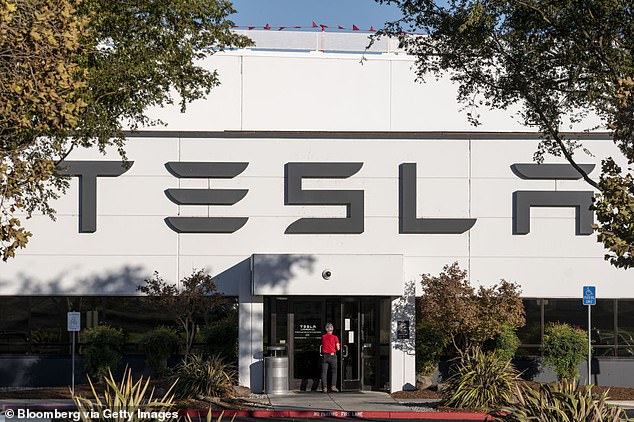 In Texas, Musk said, ‘Our factory’s like five minutes from the airport, 15 minutes from downtown and we’re gonna create ecological paradise right here.’

While he did not give a timeline of when Tesla’s headquarters in Texas will be operational, he noted that it takes less time to build a factory than it does to reach high-volume production.

He said that the plant in Texas will closely resemble Tesla’s Shanghai plant, which was built in 11 months and reached high-volume production after a year.

In December, Musk personally moved to Texas after living in California for two decades. Moving to Texas allowed Musk to get closer to his aerospace company SpaceX’s launch site in Boca Chica and reduce his personal tax burden. 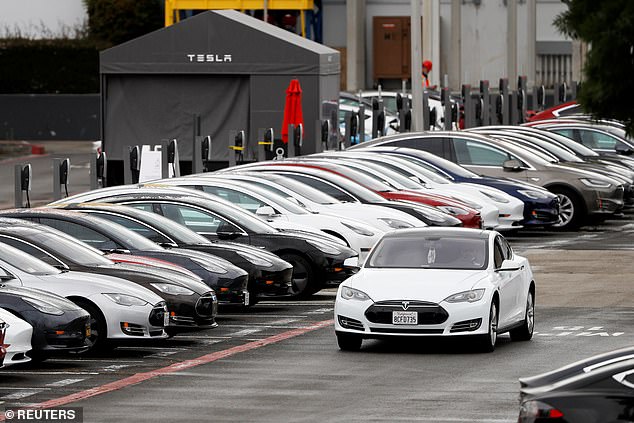 Musk said that said California is not as affordable and his workers have a long commute. Above is Tesla’s primary vehicle factory in Fremont, California

Musk first publicly mentioned his plan to leave California for Texas in a string of furious tweets in May 2020 after a California county health official said that the plant could not reopen amid coronavirus shutdowns.

Musk’s fury was directed towards Alameda County Health Officer Erica Pan, who said the Fremont company would not be able to reopen despite California Governor Gavin Newsom lifting some coronavirus restrictions at the time.

‘Frankly, this is the final straw. Tesla will now move its HQ and future programs to Texas/Nevada immediately,’ he said in tweet on May 9, 2020.

‘If we even retain Fremont manufacturing activity at all, it will be dependent on how Tesla is treated in the future. Tesla is the last carmaker left in CA.’

Musk first teased the move to Texas in the beginning of the coronavirus pandemic in response to California’s strict reopening guidelines. The disgruntled CEO took to a comment thread on Twitter about his opposition to the state’s reopening rules

In a separate tweet, he threatened to sue Alameda County over the restrictions

In a separate tweet, he wrote, ‘Tesla is filing a lawsuit against Alameda County immediately. The unelected & ignorant ‘Interim Health Officer’ of Alameda is acting contrary to the Governor, the President, our Constitutional freedoms & just plain common sense!’

The dispute came a week after Musk lambasted state officials over lockdown orders he called ‘fascist’ and unconstitutional.

Tesla’s move to Texas from California follows that of other tech giants like Oracle and Hewlett Packard. Texas has been reeling in companies by offering tax breaks for those that put new facilities in the state through the Texas Economic Development Act.

Texas Gov. Greg Abbott lauded Musk’s plans to move Tesla to Texas last month and said in an CNBC interview that the two talk frequently and that Musk supports his state’s ‘social policies.’

His statement came a day after Texas introduced its strict abortion law that bans pregnancy terminations after a fetal heartbeat is detected within six weeks. A federal judge has since ordered a temporary injunction of the toughest-in-the-nation abortion ban.

Musk shied away from disclosing his views on the subject.

‘In general, I believe government should rarely impose its will upon the people, and, when doing so, should aspire to maximize their cumulative happiness. That said, I would prefer to stay out of politics,’ he said.