Wales or Ireland may have to change out of their traditional jerseys if they are drawn to play each other at the 2027 Rugby World Cup as part of plans to help colour blind rugby fans.

Difficulty distinguishing between the red and green colours worn by the two teams is the most common form of colour blindness, a condition which is thought to impact around one in 12 men and one in 200 women.

The move comes after Sir Bill Beaumont, the chairman of World Rugby, revealed he has colour vision deficiency and former Scotland captain Chris Paterson said he sometimes struggled to distinguish between navy blue and dark red during his playing days. 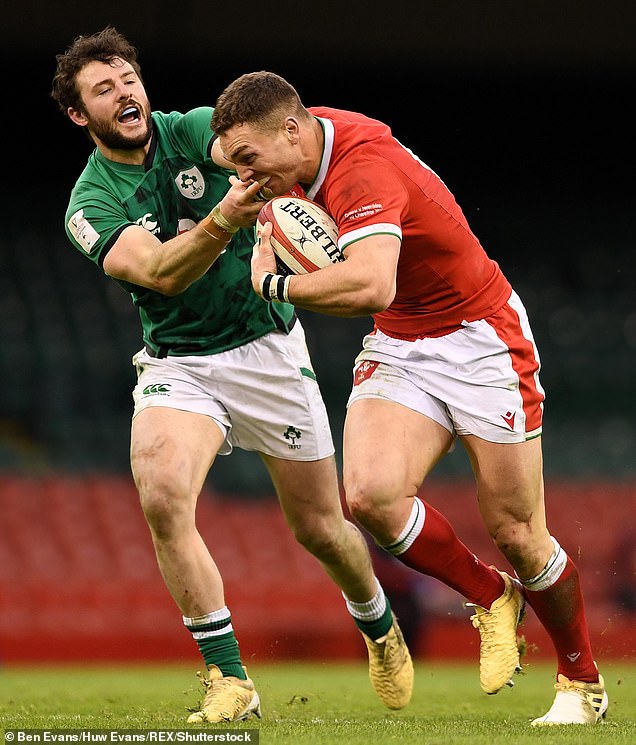 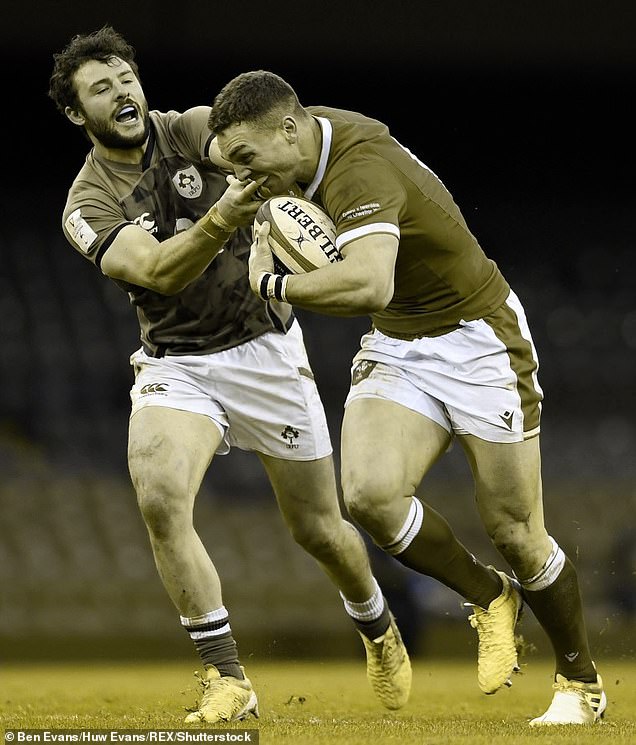 World Rugby is aiming to avoid two teams playing against each other in red and green at the 2027 Rugby Word Cup. Pictured: left, what a Wales v South Africa game may look like to someone with colour blindness. Right, how it looks to regular viewers

Colour blindness is thought to affect approximately 300million people worldwide and with 8 per cent of men living with the condition, as many as 3,000 fans at a game could be struggling to distinguish between colours.

Marc Douglas, World Rugby’s research, turf and equipment manager, told the i newspaper: ‘From our perspective, if you’re potentially limiting 8% of your male audience, that’s a huge, huge number of people who are suddenly switching off.’

World Rugby is aiming to avoid two teams playing against each other in red and green at the 2027 Rugby Word Cup, and where clashes do occur, one team will be forced to wear their alternative kit.

The change would also impact Canada and Tonga, who wear red, and South Africa, who wear green.

It is understood the change will not come into force for the 2023 Rugby World Cup in France as kit designs have been finalised. 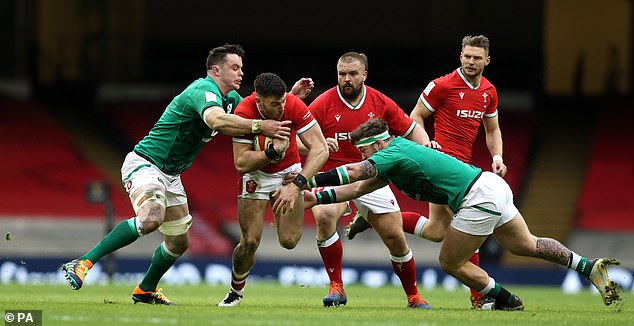 Colour blindness is thought to impact one in 12 men, with difficulty distinguishing between red and green being the most common issue. Pictured: Wales v Ireland in the Six Nations in February

World Rugby, in partnership with the charity Colour Blind Awareness, published a set of guidelines to help people involved in the sport face the challenges posed by the condition.

The document highlighted implications of colour blindness in the areas of kit clashes, equipment and TV coverage among others with World Rugby saying it would work towards adopting them and encouraged stakeholders to support its effort.

One rugby supporter told Telegraph Sport that distinguishing between red and green was more difficult on television, especially during games played under headlights, while the recent Lions series against South Africa posed particular problems due to the home team’s darker green kit. 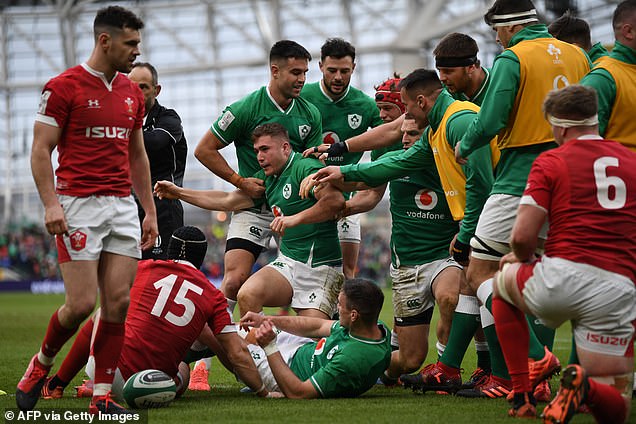 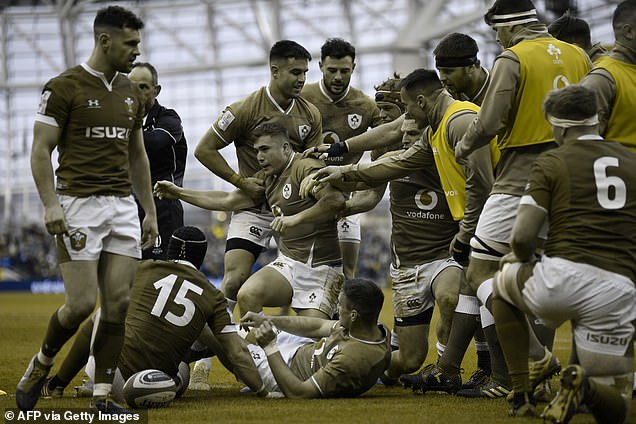 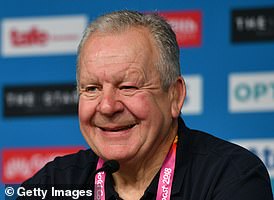 ‘I too have CVD and I am proud of the steps that we have taken in partnership with Colour Blind Awareness to both educate and inform in this important area in the form of these guidelines.

‘Together we can ensure that the game is as inclusive as possible for everyone.’ 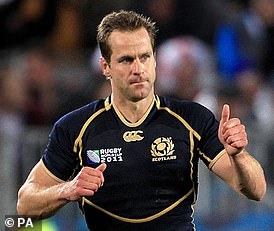 ‘I remember playing at night-time when we played for Edinburgh and Scarlets would come up in their dark red.

‘I remember a couple of times making a line line-break on a counter attack, running into what I thought was space between two of my own men and just getting totally smashed.

‘Your focus is on the ball, you’re running and scanning the whole time… [it’s] because there’s not that real clear division in our eyes, I suppose.’

Mr Beaumont said World Rugby’s plans were part of making rugby ‘accessible and inclusive for all’.

Last month he said the condition was ‘largely misunderstood’ and the challenges for those who play, coach, officiate and support the sport was often overlooked.

He added: ‘Whether you are a player, coach, match official, administrator, volunteer or fan. No matter whether you are young or young at heart. No matter your religion, gender, sexual orientation, race, ability or disability – everyone is welcome in rugby.

‘We exist to ensure that rugby is accessible and inclusive for all. Underscoring that commitment, we recognise the challenges that people with colour blindness or colour vision deficiency (CVD) have participating and experiencing our sport.

‘I too have CVD and I am proud of the steps that we have taken in partnership with Colour Blind Awareness to both educate and inform in this important area in the form of these guidelines.

‘Whether you are at the community or elite levels of the game, this guidance is designed to help you ensure that colour blind people are welcomed, have an exceptional experience, enjoying all the huge lifelong benefits that rugby can offer.

‘Together we can ensure that the game is as inclusive as possible for everyone.’

In 2019, a ‘See Green’ Google Chrome extension was developed to help colour blind Irish fans watch their team at the Rugby World Cup in Japan. The technology allowed fans to adjust colours they saw on screens.

WHAT IS COLOUR BLINDNESS?

Approximately one in 20 people suffer from colour blindness, a condition that makes the world a duller place to look at.

There are four kinds of colour blindness known as protanopia, dueteranopia, tritanopia and achromatopsia.

Protanopia involves defective or absent long-wavelength cones in the retina; these photoreceptor cones are responsible for the perception of red light. Protans find it difficult to distinguish between red and green colours, and also between blue and green.

Deuteranopia is a condition where the green photoreceptor cone is missing from the retina. As a result, it is much harder for deutans to distinguish green from red, as well as some grays, purples and a greenish blue. Along with protanopia this is one of the most common forms of colour blindness.

Tritanopia is a complete lack of the short-wavelength cones in the retina that receive blue light. People with this very rare form of colour blindness confuse light blues with greys, dark purples with black, mid-greens with blues and oranges with reds.

People with total acromatopsia cannot perceive any colours at all and can only observe the world in black and white and shades of gray.

The retina of the eye has two types of light-sensitive cells; rods and cones.

Both are found the layer at the back of your eye which processes images.

Rods work in low light conditions, but cones work in daylight and are responsible for colour. People who have colour blindness have a problem with the cones in their retina.