A mother of two who grew up on a dairy farm and a former primary school teacher are in the running to replace outgoing NSW Nationals leader John Barilaro and become the state’s next Deputy Premier.

Water Minister Melinda Pavey and Regional Roads Minister Paul Toole will go head to head in a National Party room vote on Wednesday morning with the contest expected to be ‘tight’.

Mr Barilaro resigned on Sunday, two days after ex-Premier Gladys Berejiklian quit over a corruption investigation, joking that he was having a ‘mid-life crisis’ and wanted a new career outside of politics. 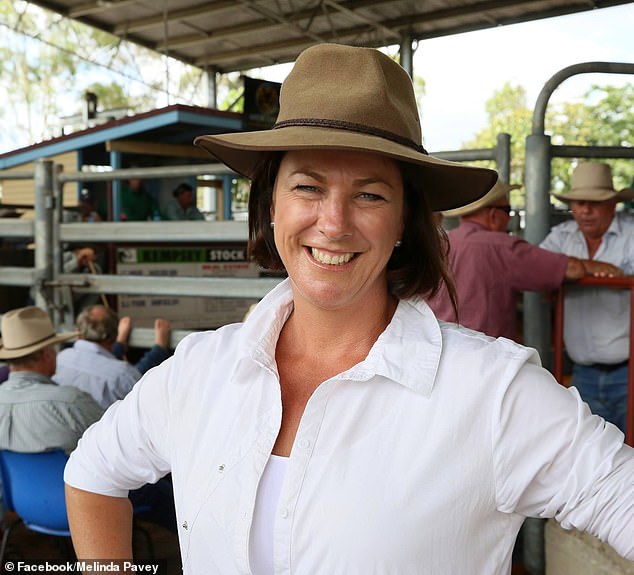 Melinda Pavey (pictured), a mother of two, declared she would run for NSW Nationals leader position as soon as Mr Barilaro announced his exit 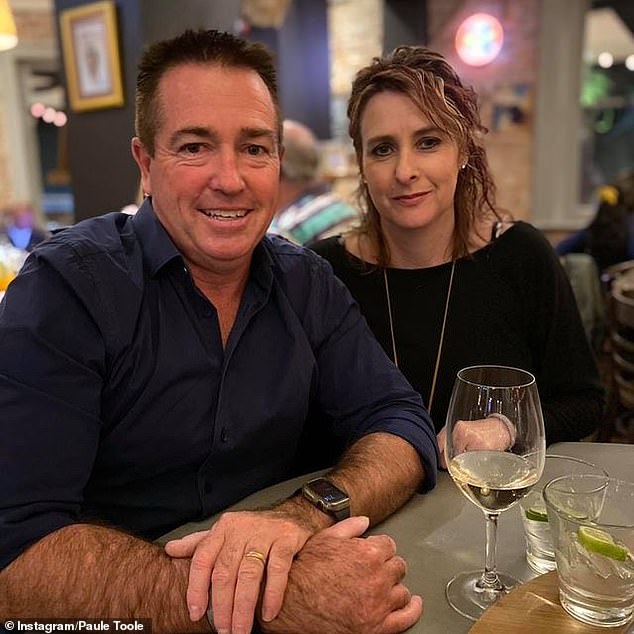 Paul Toole (with partner), a former school teacher and mayor who is Nationals deputy leader,  is also eyeing a promotion

He said the reason for his retirement would become clear ‘in the weeks ahead and the months ahead’.

Ms Pavey, a mother of two, declared she would run for his position as soon as Mr Barilaro announced his exit.

The mother-of-two grew up on a dairy farm in Victoria before working as a journalist for 2UW radio in Sydney and then becoming a media advisor in the National Party in 1988.

She entered the Legislative Council in 2002, three weeks after giving birth to daughter Emily aged 33, and switched to the lower house as member for Oxley in 2015.

Announcing her bid to lead the Nationals on Sunday, Ms Pavey said: ‘John has inspired me to continue his work and I have decided to nominate as the leader of the NSW Nationals.

‘A strong National party is integral to a strong coalition and I am encouraged by the support my colleagues have shown me.’

Ms Pavey was the first to put her hand up for the job on Monday, but Mr Toole – a former school teacher and mayor who is Nationals deputy leader – is also eyeing a promotion.

Mr Toole began teaching at Assumption Primary School in Bathurst in 1995 before joining the Evans Shire Council and becoming mayor in 2007.

Announcing his run for the top job on Tuesday, he said: ‘This is a time where we need a strong and stable leadership (as) we are coming out of a pandemic.’

He talked up his credentials as deputy party leader, and pointed to his track record of working with the incoming premier in crisis cabinet and other committees.

When announcing his surprise decision to step down, Mr Barilaro said NSW would be best served by someone who had the passion and fight to forge on.

‘I just don’t have the energy anymore,’ Mr Barilaro told reporters on Monday.

The Nationals leader said he had been ‘thinking about this for a while’, and ruled out running for federal parliament.

‘I’m looking for a new career. I turn 50 in November, maybe a bit of a midlife crisis, but definitely thinking about what happens next. I will take some time out, but I genuinely won’t be running for federal politics,’ the Monaro MP said.

The scandal prompted Mr Constance to withdraw from contesting the federal seat of Eden-Monaro and remain in state politics.

”When I said politics is stuffed in this country, and some of the people in it need to have a long hard look, I meant it. I hadn’t signed up to contest federally to be called that type of smear,’ he said at the time.

September 2020: Mr Barilaro and Ms Berejiklian butt heads over a change to the Koala protection bill following the worst bushfires in NSW history.

The Koala Habitat Protection State Environment Planning Policy identified 123 trees that were needed as food or shelter for the animals.

Mr Barilaro said the policy would be taking away land from farmers.

‘If we were to support that we would become the laughing stock of regional and rural NSW,’ he said.

The two party leaders later agreed to amendments of the bill, which Mr Barilaro declared a win for the Nationals and regional NSW.

May 2021: Mr Barilaro – fed up with being called corrupt and a ‘greasy Ned Kelly’ – is suing Google and the man behind YouTube channel friendlyjordies.

Entertainer Jordan Shanks-Markovina, whose channel boasts more than 130 million views, is also accused of falsely making out the NSW Nationals leader has blackmailed councillors and pocketed millions stolen from a local government.

The MP is of Italian heritage and his hurt and harm has been aggravated by Shanks-Markovina’s ‘vile and racist attack’ in the videos.

In one video, the entertainer refers to Mr Barilaro as a ‘big, fat, wog c**t’, ‘greasy Ned Kelly’ and ‘a conman to the core, powered by spaghetti’.

In his resignation speech, Mr Barilaro thanked his constituents for their support, describing his role as the leader of the National party as ‘the honour and privilege of a lifetime’.

He said it felt right to leave parliament alongside Ms Berejiklian to give NSW a fresh start, allowing two new leaders to take the reins as the state finally exits a gruelling 15-week Covid lockdown.

‘I’m going to be a keen watcher of politics, but I will not be a participant. I have no intention of running in federal politics… I’d been thinking about this for a while,’ he said early on Monday morning.

Mr Barilaro said defamation proceedings he launched against YouTuber Jordan Shanks – aka FriendlyJordies – and Google played an enormous role in his decision to quit politics. 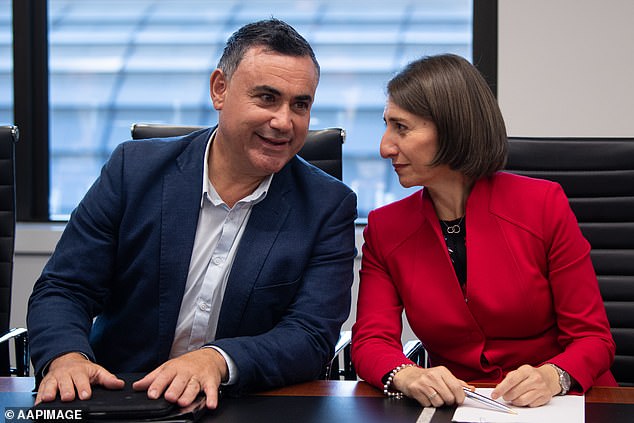 He said it felt right to step down alongside Ms Berejiklian (pictured together) to give NSW a fresh start, allowing two new leaders to take the reins together as the state finally exits a grueling 15-week Covid lockdown 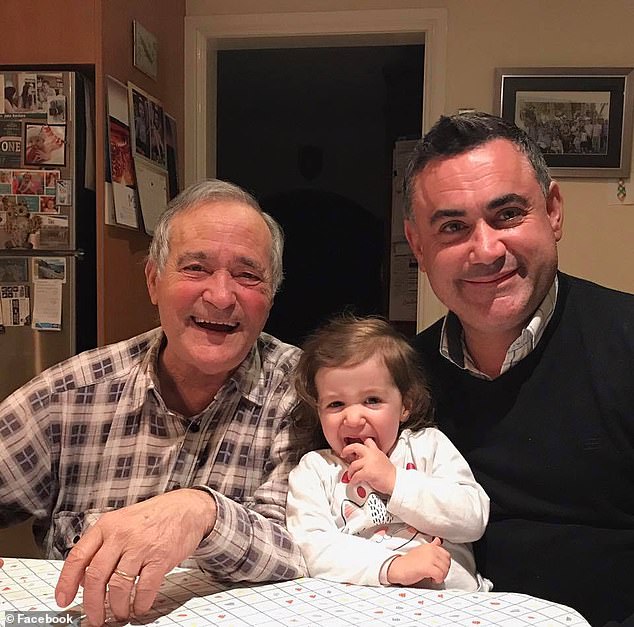 The father-of-three is proud of his heritage and the sacrifices his parents made for him growing up, citing his late father as his ‘biggest inspiration’ for getting into politics

He accused Shanks of spouting ‘vile racism’ hidden as journalism, noting the ‘disgusting, vile, racist commentary on social media has taken a toll’.

‘As a young boy with immigrant parents, I understood what racism was from a young age,’ he said during a press conference on Monday morning.

In one YouTube video, the entertainer referred to Mr Barilaro as a ‘big, fat, wog c**t’, ‘greasy Ned Kelly’ and ‘a conman to the core, powered by spaghetti’.

In 2020 Mr Barilaro said he wears the nickname ‘Pork Barrel-aro’ with a badge of honour. Pork Barrelling is the practice of handing out taxpayer money to win votes, usually in government-held seats.

The father-of-three said he was proud of his Italian heritage and the sacrifices his parents made for him growing up, citing his late father as his ‘biggest inspiration’ for getting into politics.

He said Ms Berejiklian’s announcement on Friday brought forward his decision to retire.

Mr Barilaro noted the immense sacrifices she gave to her state and wished the outgoing premier well in her post-politics life.

But while Mr Barilaro’s colleagues paid tribute to him as a tireless advocate for the bush, Opposition Leader Chris Minns described him as selfish.

‘It is putting personal ambition and a next career-move first,’ he said.

Mr Barilaro could better serve the community from the back bench while the health crisis continued, Mr Minns argued.

A Nationals party-room meeting has been called for Wednesday, when Mr Barilaro will formally resign and call for a ballot for a new leader.

Once that is settled, he will work with the Speaker and the Electoral Commission to determine a date for a by-election in his seat of Monaro. 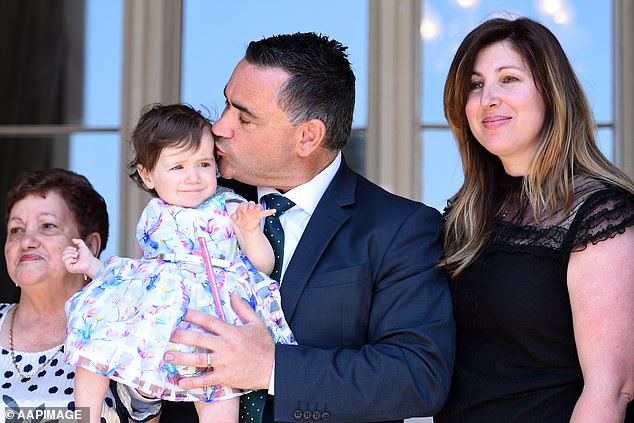 Why did Gladys Berejiklian resign?

Ms Berejiklian quit on Friday after the state’s corruption watchdog said it was investigating her.

The Independent Commission Against Corruption is investigating whether Ms Berejiklian encouraged or allowed corrupt conduct by her secret ex-boyfriend and former Wagga Wagga MP Mr Maguire between 2012 and 2018.

It will also probe whether she breached public trust by not reporting any suspicion of corrupt conduct and what role she had to play in two government grants handed out in Mr Maguire’s electorate. 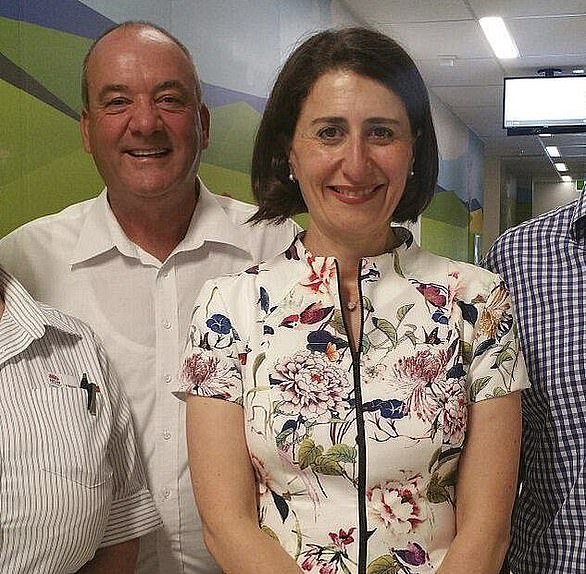 An ICAC public inquiry on the matter will be held for about 10 days from October 18, overseen by Assistant Commissioner Ruth McColl SC.

Mr Maguire is accused of abusing his public office after admitting being involved in a cash-for-visa scheme and seeking secret commissions for brokering property deals. He was forced to resign in 2018.

In an emotional 10-minute speech on Friday Ms Berejiklian denied any wrongdoing and slammed the watchdog for announcing its investigation into her as the state emerges from a four-month Covid lockdown.

‘Resigning at this time is against every instinct in my being and something which I do not want to do,’ she said.