An activist who filmed herself heckling moderate Democrat Senator Kyrsten Sinema as Sinema used a bathroom at Arizona State University has defended her actions in a Facebook rant, saying that she would not allow the ‘tone police’ to criticize her.

‘I will speak about the controversy regarding following Senator Sinema into the bathroom when I have the time. None of you have the right to tone police my desperate demands for labor protections after what I have endured as a human trafficking survivor due to the f**ked up gig economy,’ Sophia Marjanovic said in a Facebook post, FOX reported.

Marjanovic was in the group of activists who filmed the Arizona Sen. inside a bathroom in ASU, where she teaches, even recording while the lawmaker was using a private stall.

She demanded Sinema support President Joe Biden’s Build Back Better agenda that would provide a pathway to citizenship for illegal immigrants.

Her behavior has been roundly condemned, with DailyMail.com columnist Meghan McCain among those blasting Marjanovic in her latest column, and highlighting the fact that those filming committed a felony offense.

Marjanovic said that she will speak about the backlash she received for filming Sinema when she ‘has the time,’ and that critics had no right to question her demands, but offered no further excuses for the specifics of her behavior. 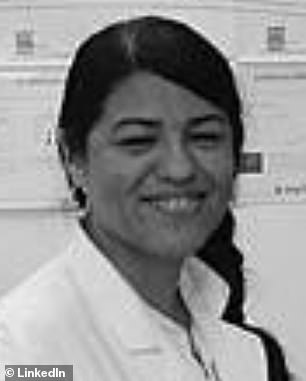 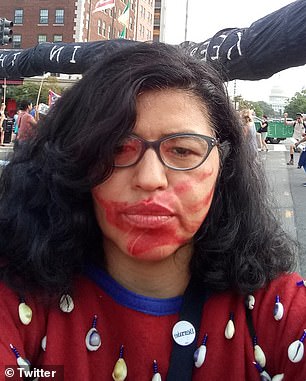 Sophia Marjanovic said in a Facebook post she would not allow the ‘tone police’ to criticize her after all she had endured as a human trafficking victim. Marjanovic was in the group of activists who filmed Sen Sinema inside a bathroom at ASU, where she teaches

‘For now, connect with the fact that you are on stolen indigenous women and children go missing and murdered because we don’t have access to stable jobs, stable housing, clean water, clean food, or stable decent health care despite the fact that indigenous people have upheld our end of the treaty in assimilating and getting educated,’ she continued.

Marjanovic then concluded: ‘White communications Department of Organization, media, and campaigns uphold white supremacy. Step out of the way!

The activist has a Ph.D. in microbiology and immunology but is highly engaged in activism and politics.

According to her LinkedIn profile, she was a field organizer for Bernie Sander’s presidential campaign in 2019 and 2020.

During a campaigning event in New Hampshire in 2020, Marjanovic introduced Sanders to the audience while dressed in indigenous attire and the silhouette of a hand imprinted on her mouth with red paint.

She has also worked along with the Democratic Socialists of America and has listed experience as an activist in the Supreme Court and a citizen lobbyist for Medicare For All. 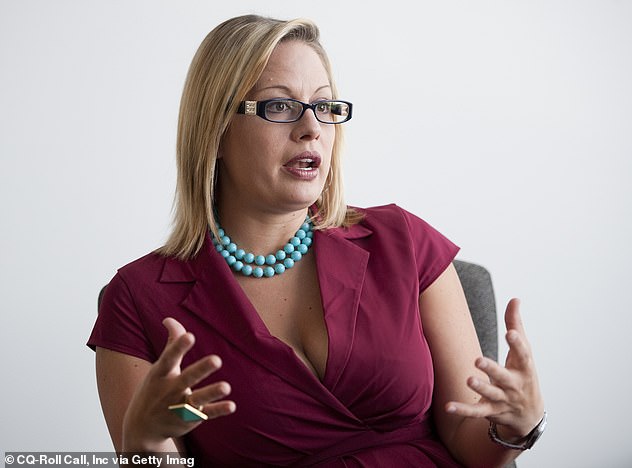 A group demanded Sinema to support President Joe Biden’s Build Back Better agenda that would provide a pathway to citizenship for illegal immigrants, while she was in a bathroom at Arizona State University 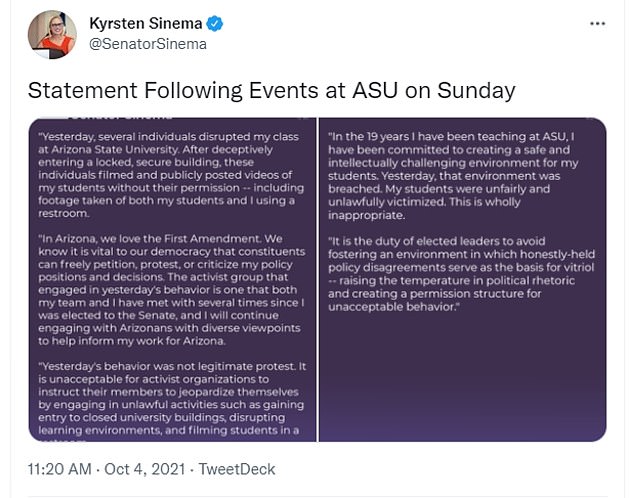 Sen. Kyrsten Sinema condemned protesters who confronted her and followed her into a bathroom at Arizona State University a day earlier, saying their behavior was ‘unacceptable’

Following the incident at ASU on Friday, Sinema released a statement.

‘My students were unfairly and unlawfully victimized. This is wholly inappropriate,’ she said.

‘It is the duty of elected leaders to avoid fostering an environment in which honestly-held policy disagreements serve as the basis for vitriol — raising the temperature in political rhetoric and creating a permission structure for unacceptable behavior.’

She added that she had previously met with the group behind Sunday’s protest and would continue to talk to Arizonans with a diverse range of views.

‘Yesterday’s behavior was not legitimate protest,’ she said.

‘It is unacceptable for activist organizations to instruct their members to jeopardize themselves by engaging in unlawful activities such as gaining entry to close university buildings, disrupting learning environments, and filming students in a rest room.’ 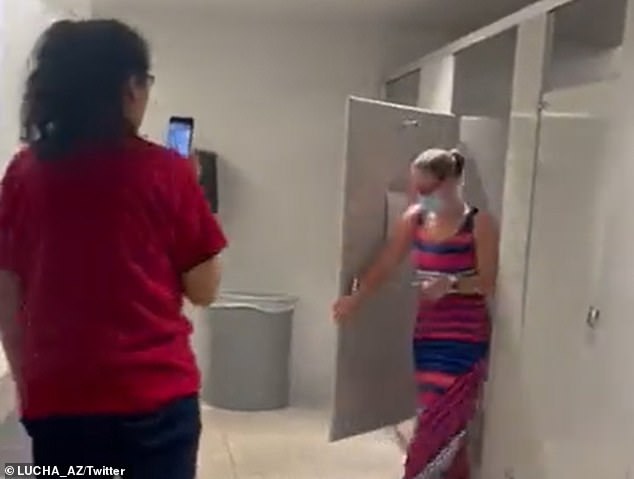 ‘We knocked on doors for you to get you elected. Just how we got you elected, we can get you out of office if you don’t support what you promised us,’ one activist threatened 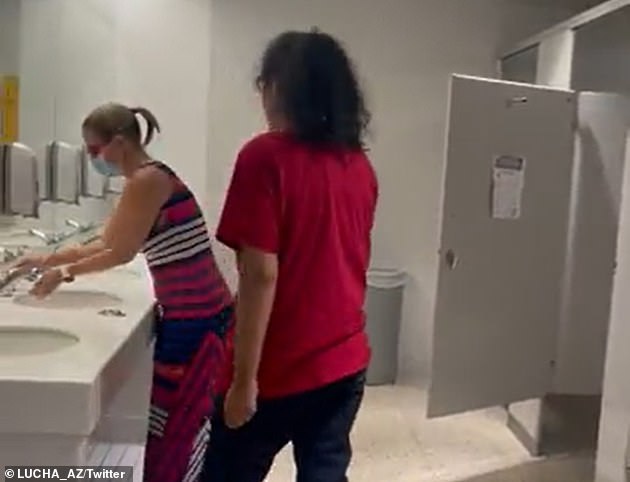 ‘I am a survivor of human trafficking and it’s because of the lack of work protections that we don’t have. I need you to stand by workers…’ a woman, likely Marjanovic, shared before the video cut off

On Friday, Marjanovic and others confronted Sinema outside the classroom where she teaches and followed her into the nearby bathroom, recording the incident as they walked.

‘We knocked on doors for you to get you elected. Just how we got you elected, we can get you out of office if you don’t support what you promised us,’ one activist threatened.

Another, who introduced herself as Blanca, attempted to pull at Sinema’s heartstrings by sharing a personal anecdote.

‘I was brought here to the United States when I was three years old and in 2010 my grandparents both got deported because of S.B. 1070 and I’m here because I definitely believe that we need a pathway to citizenship,’ Blanca said.

‘My grandfather passed away two weeks ago and I was not able to go to Mexico and visit him because there is no pathway to citizenship. And if we have the opportunity to pass it right now than we need to do it because there’s millions of undocumented people, just like me, who share the same story.’

‘We need the Build Back Better plan right now,’ one is heard saying.

‘I am a survivor of human trafficking and it’s because of the lack of work protections that we don’t have. I need you to stand by workers…’ a woman, likely Marjanovic, shared before the video cut off.

Sinema initially told the activists she was ‘heading out’ and couldn’t speak at the time. When they continued to follow her into the restroom, she ignored them as she used the facilities and washed her hands.

Sinema is one of the key holdouts on Biden’s $3.5 trillion social spending bill.

She slammed leaders of her own party on Saturday over their ‘inexcusable’ failure to hold a vote on the $1.2 trillion bipartisan infrastructure plan.

‘The failure of the U.S. House to hold a vote on the Infrastructure Investment and Jobs Act is inexcusable, and deeply disappointing for communities across our country,’ Sinema wrote. 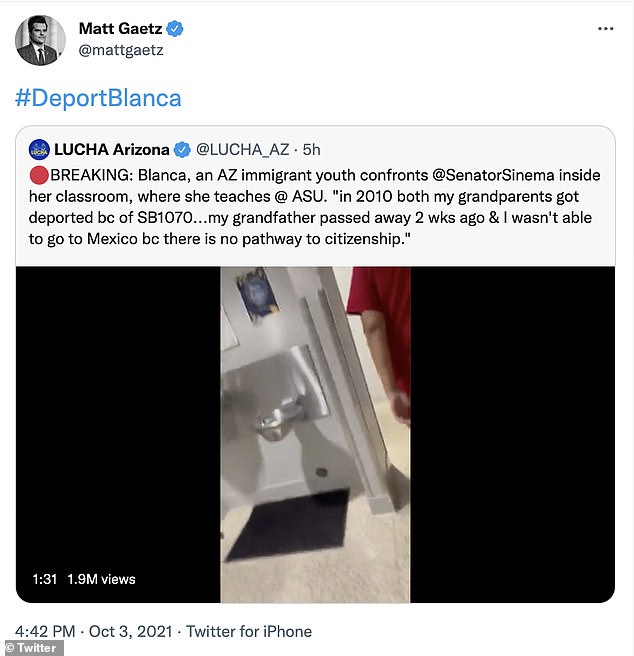 The video, which was shared on social media, prompted response from Rep. Matt Gaetz (R-Florida) who has openly opposed illegal immigration 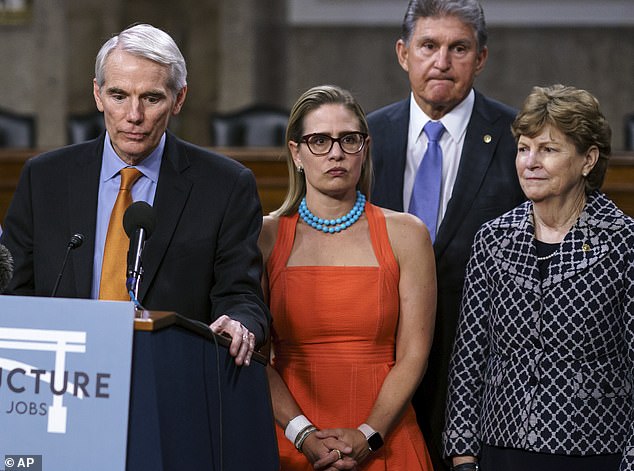 House Speaker Nancy Pelosi canceled the vote on the Senate-passed infrastructure bill on Thursday as several far-left caucus members vowed to tank President Joe Biden’s $1 trillion infrastructure plan, which centrists support, if the moderate faction does not also back the broader $3.5 trillion social spending bill that is packed with their priorities.

Although Democrats did not have enough votes to pass the infrastructure bill, Sinema argues that canceling it was ‘an ineffective stunt to gain leverage over a separate proposal.’

‘My vote belongs to Arizona, and I do not trade my vote for political favors — I vote based only on what is best for my state and the country,’ she said.

‘I have never, and would never, agree to any bargain that would hold one piece of legislation hostage to another.’

Sinema also argued that she worked to deliver the infrastructure bill while also engaging in ‘good faith negotiations’ on the reconciliation package.

‘Good-faith negotiations, however, require trust. Over the course of this year, Democratic leaders have made conflicting promises that could not all be kept — and have, at times, pretended that differences of opinion within our party did not exist, even when those disagreements were repeatedly made clear directly and publicly,’ she stated.

‘Canceling the infrastructure vote further erodes that trust. More importantly, it betrays the trust the American people have placed in their elected leaders and denies our country crucial investments to expand economic opportunities,’  the statement read. 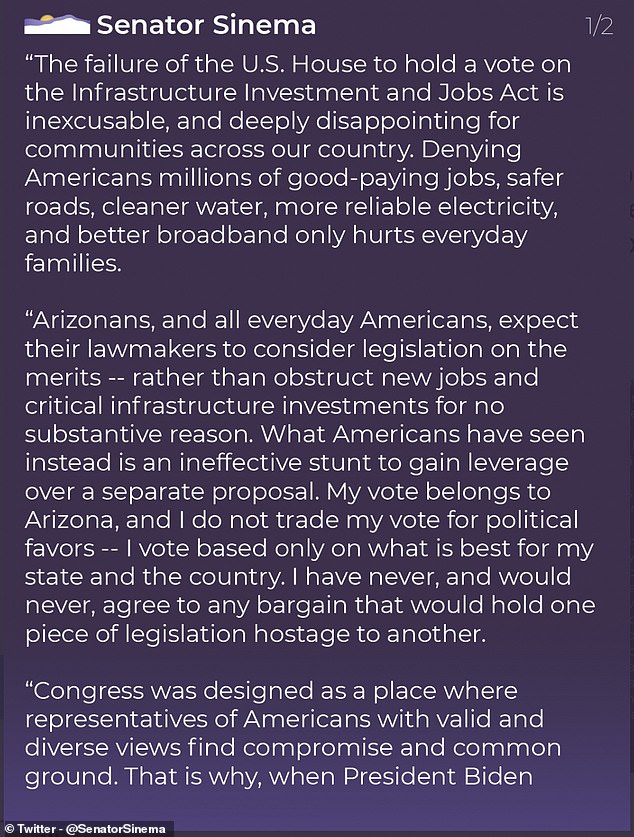 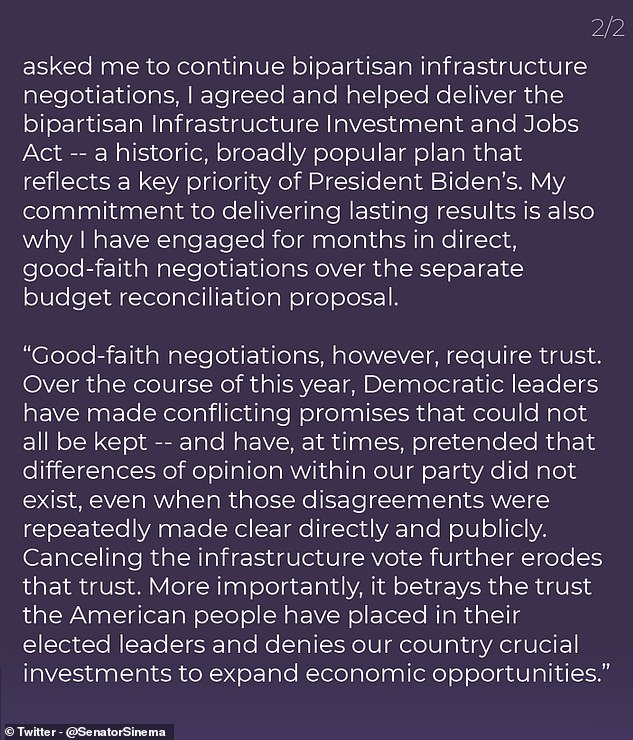 In a statement released on Twitter, Sinema argued that delaying the vote was ‘deeply disappointing’ and a betrayal of the trust of the American people.