The parents of Natasha Ednan-Laperouse, who died from an allergic reaction after eating a baguette, have welcomed a new law in her name saying their daughter would be ‘very proud’.

Natasha’s Law, which comes into force today, requires all food retailers to display full ingredient and allergen labelling on every food item made on the premises and pre-packed for direct sale.

Fifteen-year-old Natasha died in July 2016 after she ate a baguette she was unaware contained hidden sesame seeds which she was severely allergic to. 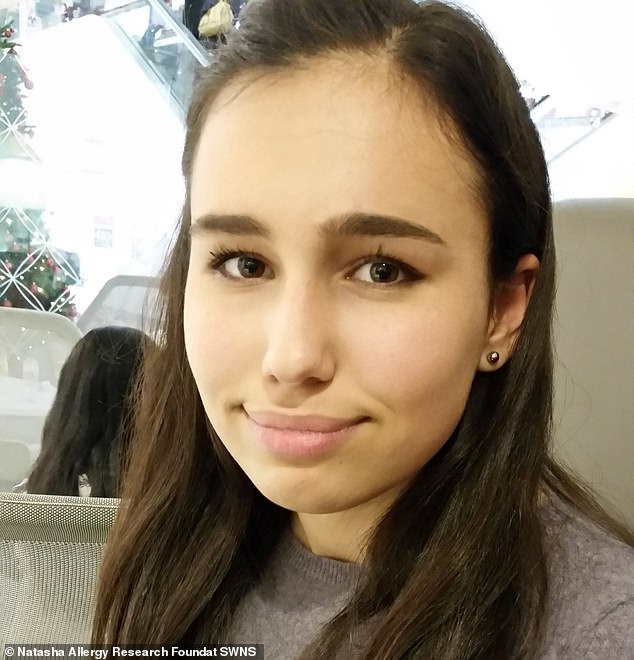 Natasha Ednan-Laperouse died from an allergic reaction after eating a baguette. Natasha’s Law, which comes into force today, requires all food retailers to display full ingredient and allergen labelling on every food item made on the premises and pre-packed for direct sale

Her parents Tanya and Nadim, who set up the Natasha Allergy Research Foundation, campaigned for the change after the food labelling scandal was exposed at their daughter’s inquest in 2018.

Mr Ednan-Laperouse said: ‘Natasha’s Law is about saving lives and marks a major milestone in our campaign to support people with food allergies.’

His wife added: ‘Nothing can bring Natasha back but we know she would be very proud a new law in her name will help others.’

Natasha went into anaphylactic shock within minutes of take off on a British Airways flight to France after buying a sandwich at a Pret-A-Manger branch in Heathrow airport.

The 15-year-old  knew she was allergic to milk, eggs, banana, nuts and sesame seeds so along with her dad, Nadim, had checked the label carefully.

But the artichoke, olive and tapenade baguette contained sesame seeds that were baked into the dough and so not visible or listed in the ingredients.

She fell ill while in the air and despite efforts to give her adrenaline shots, she was unable to breathe and suffered a heart attack and later died in a French hospital on July 17, 2016.

Natasha, who lived in Fulham, west London, had been travelling to Nice with her father and best friend Bethany when tragedy struck.

Nadim, 56, administered two Epi-pens – which delivered potentially lifesaving adrenaline to his daughter as she struggled to breathe – but they did not work and she suffered multiple cardiac arrests. 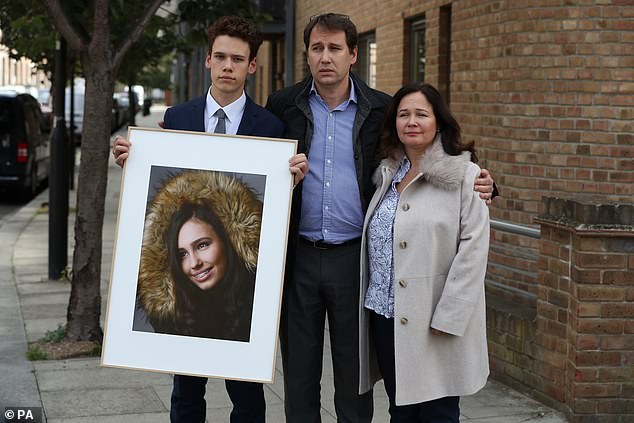 Natasha’s parents Tanya (right) and Nadim (centre) set up the Natasha Allergy Research Foundation and campaigned for the change after the food labelling scandal was exposed at their daughter’s inquest in 2018. Here they are pictured with their son Alex (left)

A loophole in the law meant Pret – and other firms like it – were not obliged to provide a full list of allergens on products made in their stores.

Now from today, Natasha’s Law comes into force that will require more pre-packaged food like takeaway sandwiches, cakes and salads to have their full ingredients and allergy details listed on the item.

Changes ushered in by the law will apply to businesses selling their own pre-packaged food at other outlets they run – which will include market stalls and mobile food vans.

Under current legislation, food prepared on the premises in which it is sold is not required to display allergen information in writing.

As a result, there was no specific allergen information on the packaging of the baguette that caused Natasha’s fatal reaction.

Mr Ednan-Laperouse added: ‘Natasha’s Law is vital to protect the 2 to 3 million people in the UK living with food allergies from life-threatening allergic reactions.

‘This change in the law brings greater transparency about the foods people are buying and eating; it will give people with food allergies confidence when they are buying pre-packaged food for direct sale such as sandwiches and salads.

‘Everyone should be able to consume food safely.’