Nebraska is already promising to defy a Biden proposal that would require banks to hand over transaction data on individual bank accounts to the IRS.

‘My message is really simple. The people of Nebraska entrusted me to protect the privacy of these accounts and I am not going to comply with this. If the Biden administration sues me, we will take it all the way to the Supreme Court. We are going to fight every step of the way,’ state treasurer John Murante told FOX Business.

The proposal, backed by $79 billion in additional funding, would allow the IRS to peer into the aggregate inflows and outflows of a bank account over $600.

This crackdown on unreported income is expected to generate $463 billion over the next decade, according to the Office of Tax Analysis. That money would be used to partially fund Biden’s $3.5 trillion budget reconciliation plan.

Murante said he believes other states would also refuse to comply.

‘We have members across the country who are committed to limited government and free market approaches, and we are unanimously against this proposal. It is an invasion of privacy and lacks any due process,’ he said. 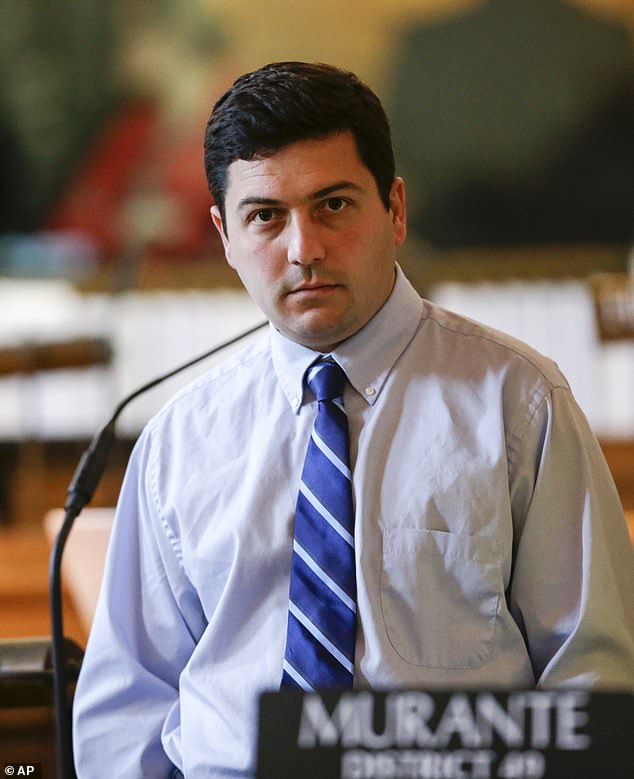 Wyoming Republican Sen. Cynthia Lummis on Tuesday tore into Treasury Sec. Janet Yellen on Tuesday for her support of the Biden proposal.

‘Banks do not work for the IRS,’ Lummis said. ‘This is invasive of privacy. Wyoming’s people literally will find alternatives to traditional banks just to thwart IRS access to their personal information, not because they’re trying to hide anything, but because they are not willing to share everything.’

The senator asked Yellen if she was ‘aware how unnecessary this regulatory burden is?’

‘Do you distrust the American people so much that you need to know when they bought a couch?’ Lummis asked. ‘Or a cow?’

‘I am astounded by what you’re supporting and proposing. I think it’s invasive. I think privacy for individuals is being ignored. And I think that treating the American people like they are subjects of the government is unconscionable.’

Yellen told Lummis that she believes the senator is misunderstanding the proposal, as it requires banks to hand over the IRS data on aggregate inflows and outflows of an account for transactions over $600, rather than details on each individual transaction.

Yellen noted that the tax gap is expected to swell to $7 trillion over the next decade, roughly 15% of taxes owed.

The IRS would know how much money is in an individual’s bank account in a given year, whether the individual earned income on that account and exactly how much was going in an and out. 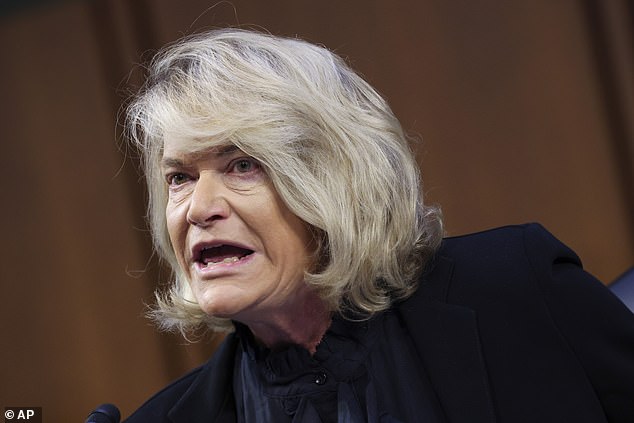 ‘Banks do not work for the IRS,’ Sen. Cynthia Lummis said. ‘This is invasive of privacy’ 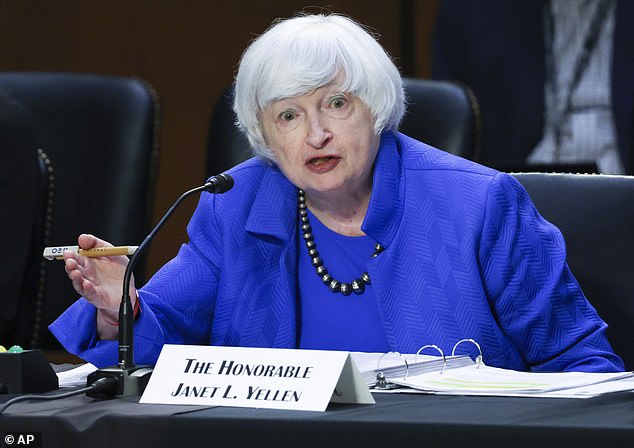 How banks will report your transactions over $600 to the IRS: The answers and (many) questions

The Biden administration plan to have banks report all transactions over $600 to the IRS has sparked fury from financial institutions and privacy concerns from Americans.

There are also concerns the vast amount of information handed over could be vulnerable to hackers.

The full details of how the reporting process have still not been clear, but there are many questions over how the IRS and banks would undertake the scale of such reporting.

Here’s what is known:

– IRS would receive $80 billion in funding to enforce compliance

-New reporting would build from the 1099 form taxpayers receive when they earn $10 or more in interest from a bank, brokerage, or other financial institution

-A line would be added to report gross inflows and outflows an account receives from financial institutions, including bank, loan, and investment accounts, foreign accounts and crypto exchanges

-IRS would use this data to conduct more targeted audits

Banks have raised some security questions.

‘How private, how secure is it, and do people want the government combing through their finances at that level?’ F&M Bank CEO Mark Hanna said.

He said it still isn’t clear what the threshold refers to.

‘Is it granular on a per-item transaction threshold or is it an aggregate? It’s hard to tell at this point. It’s all very new, and the information is kind of slowly leaking out, and I don’t even know if there is a concerted plan at this point.’

‘The IRS has a wealth of information about individuals,’ she added. Yellen said the proposal would target high earners who have ‘opaque sources of income.’

‘A $600 threshold is not usually where you’re going to find the massive amount of tax data you think Americans are cheating you out of,’ the Wyoming Republican shot back.

The proposal would require banks to report gross inflows and outflows to the IRS, including transactions from Venmo, PayPal, crypto exchanges and the like in an effort to fight tax evasion.

The Treasury Department claimed that the plan would have little effect on ‘already compliant’ taxpayers, but would help the IRS better target its audits.

‘For noncompliant taxpayers, this regime would encourage voluntary compliance as evaders realize that the risk of evasion being detected has risen noticeably,’ the Treasury Department said.

Biden, Treasury Secretary Janet Yellen, IRS chief Charles Rettig – a Trump-era holdover – and a number of Democrats in the Senate, most especially Elizabeth Warren are pushing for the proposal to help fund their $3.5 trillion budget plan.

Other parts of the plan include setting up a global minimum corporate tax rate of 15% and a system that prevents multinational companies from registering profits in the lowest-tax jurisdictions and raising taxes on the rich.

Some moderate Democrats are leery of the IRS proposal, and those on the House Ways and Means Committee are reportedly working to bring that $600 threshold up to $10,000. Banks are already required to file a currency transaction report to the financial crimes division of the Treasury on transactions over $10,000 to prevent money laundering.

Lawmakers’ staff have been working on language to exempt some payments, such as mortgage payments and salary, from the reporting requirements.

‘This is the ultimate regressive tax,’ Hedger said.

‘You’re going to end up punishing the worst off among us … the lower income folks in this country have historically been the targets of aggressive IRS audits because they don’t have the CPAs and the lawyers to be able to fight back.’

In a letter to the Senate Subcommittee on Finance, the American Bankers Association, the Bank Policy Institute, the Consumer Bankers Association and others argued that the ‘new reporting requirements for financial institutions would impose cost and complexity that are not justified by the potential, and highly uncertain, benefits.’

‘We believe additional reporting requirements guided by subjective criteria have privacy and fairness implications and the potential to put financial institutions in an untenable position with their account holders.’

They instead suggested greater funding for audits.

But IRS chief Rettig, a Trump-era holdover, is in favor of the proposal, along with the increased IRS funding that would come with it.

‘Every measure that is important to effective tax administration has suffered tremendously,’ Rettig wrote in a letter to Warren earlier this month.

‘Relying on financial institutions to relay some basic information about account holders is a sensible way forward,’ they wrote. ‘With better information for the I.R.S., voluntary compliance will rise through deterrence as potential tax evaders realize there is a risk to evasion.’

Steven Rosenthal, senior fellow at the Urban-Brookings Tax Policy Institute also said the proposal would not be worth the trouble. 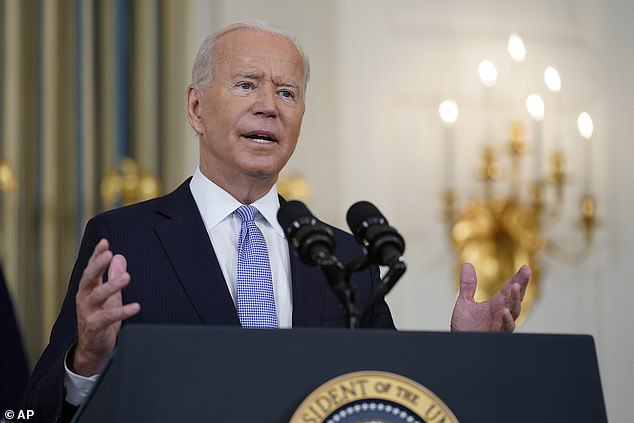 Biden, Treasury Secretary Janet Yellen, IRS chief Charles Rettig – a Trump-era holdover – and a number of Democrats in the Senate , most especially Elizabeth Warren are pushing for the proposal to help fund their $3.5 trillion budget plan

‘In practice, the IRS’ task would be daunting and, in fact, bury the agency in a sea of unproductive information,’ he said.

‘Most individuals earn all of their income from wages and investment returns, which already are reported to the IRS. And larger businesses often are audited by public accounting firms. While those businesses have many ways to reduce their taxes, omitting income rarely is one of them. Why drag these individuals and businesses into the new program?’