Three fraternity brothers at Washington State University have pleaded guilty to providing alcohol to a pledge who died after being forced to drink a half-gallon of rum during a hazing ritual in 2019 – but have avoided more serious charges over his death.

Maxwell Rovegno, Cameron Thomas and Nolan Valcik were found guilty of ‘furnishing alcohol to a minor’ that resulted in the death of 19-year-old freshman Sam Martinez at the fraternity’s house in Pullman, Washington.

They were not accused of supplying the liquor directly to Martinez.

But no members of the Alpha Tau Omega (ATO) will face hazing charges because the one-year statute of limitations expired while investigators were still gathering evidence, Pullman Police Chief Gary Jenkins told CNN.

The three men were sentenced to serve just one day in jail and pay a $1,000 fine, with $500 suspended, and spend eight months on supervised probation, Whitman County District Court records show.

The Martinez family have blasted the light charges, and said in a statement after the guilty pleas came to light: ‘While the charges may lead to some level of accountability, this is not justice. It does not bring us closure.

‘These charges are very minor…and none of it can bring Sam back.’

The family filed a wrongful death lawsuit in July 2020 against the university, the fraternity and a string of fraternity members 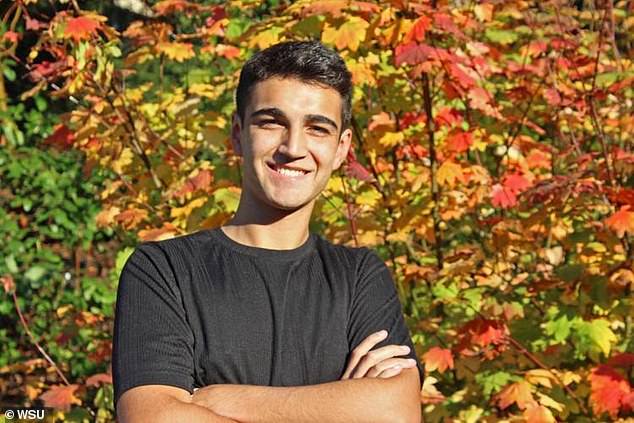 Three fraternity brothers – Maxwell Rovegno, Cameron Thomas and Nolan Valcik –  at Washington State University (WSU) have pleaded guilty to the 2019 death of pledge Sam Martinez (pictured) who was allegedly forced to drink a half-gallon of alcohol while hazing 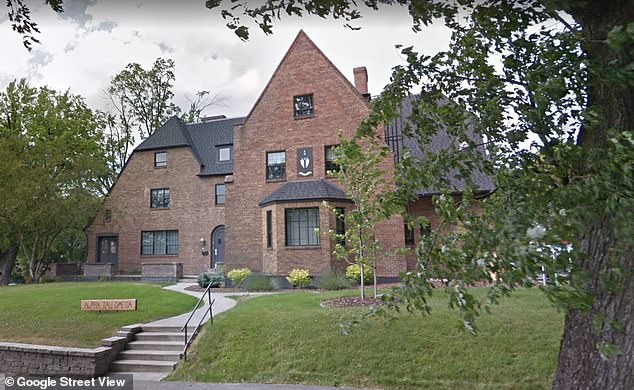 The members of Alpha Tau Omega (frat house pictured) were found guilty of ‘furnishing alcohol to a minor’ and were sentenced to serve one day in jail, pay a $1,000 fine with $500 suspended and spend eight months on supervised probation

WSU suspended the frat from operating until 2026 and Alpha Tau Omega admitted to violating the university’s standards of conduct, as per suspension regulations.

Rovegno, Thomas and Valcik were the first three of 15 frat brothers who were charged over Martinez’s death – nearly two years after the 19-year-old was found dead from alcohol poisoning.

Jenkins told DailyMail.com it took so long to reach the guilty plea ‘for a few reasons’. First, because ‘the prosecutor took about four to five months to come to a charging decision’ and then because ‘shortly after…the country went into lockdown from Covid’.

Because of the nature of the case, which involves university students, Jenkins noted that many of them don’t live in Pullman, ‘so conducting interviews when they were not all in town and during Covid really slowed down the investigation’.

The police chief said of the sentencing, which requires Rovegno, Thomas and Valcik to spend just one day in jail: ‘I don’t think I can really say whether there was justice for Sam or not because I can’t say whether those three were directly involved in Sam’s death.

‘But they were all at the event obviously and involved in illegal activity.’

On November 11,  2019 Martinez was hazing during his freshman year of college to become a member of the frat.

He was given a half-gallon of rum during a pledge event called ‘family drink night’ and was told to finish it by the end of the evening if he were to become an ATO ‘brother’, as stated in the wrongful death lawsuit filed by Martinez’s parents in July 2020.

The suit read: ‘This rite on the path to ATO membership involved pledges being paired with a “Big Brother” who then provided a drink to be immediately and excessively consumed by his “family.”’

Martinez lost consciousness within two hours of starting to drink.

According to the family’s lawsuit: ‘At some point, Sam was taken to a bathroom where ATO members tried to force him to vomit. At approximately 11.30pm, numerous ATO members carried Sam downstairs to the basement where they positioned him lying on his side.’

That’s where Sam was left until 8.30am the next morning when 911 called, ‘when it was far too late to save his life,’ the suit said. He was pronounced dead at the scene. 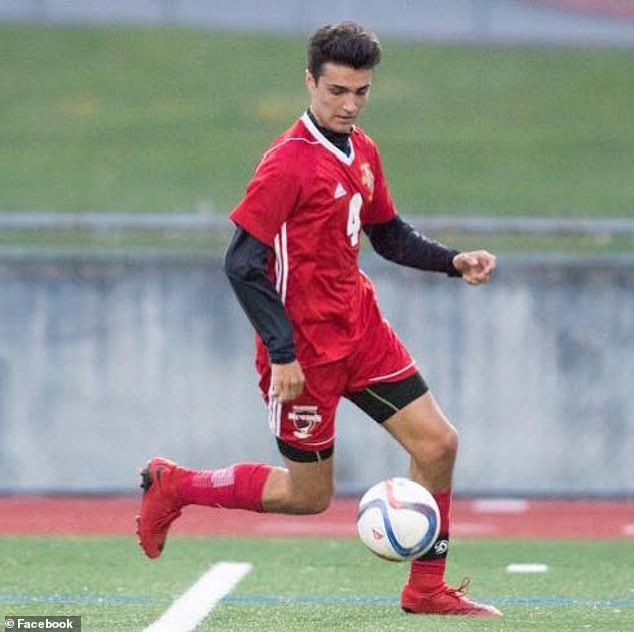 Martinez lost consciousness within two hours of starting to drink but 911 wasn’t called until around 8.30am next morning ‘when it was far too late to save his life’ a wrongful death lawsuit filed by his parents read. Martinez’s blood alcohol content was at 0.372 during his autopsy – nearly five times the legal 0.08 limit 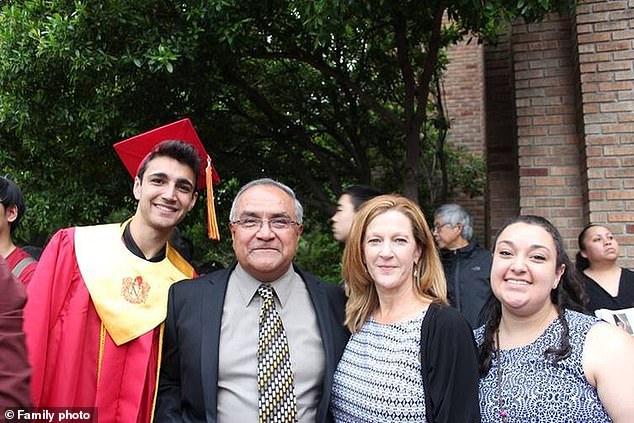 A coroner ruled that Martinez died four hours before he made it to a hospital and months ‘before completing his first college semester’. The cause of death was ‘acute alcohol intoxication’.

His blood alcohol content was at 0.372 during his autopsy –  nearly five times the legal 0.08 limit.

‘Unknown to Sam and his family, ATO, like other fraternities at WSU, had a history of hazing and dangerous excessive alcohol consumption,’ the suit, which was filed against WSU and ATO, read.

It added: ‘ATO also had a record of fatal incidents of hazing, injuries and sexual assaults at its other chapters across the country.’

According to the wrongful death lawsuit Martinez’s parents filed against WSU and ATO, other hazing rituals included exams on the history of the fraternity; eating raw onions; camping trips where the pledges were tackled and beat up; and the ‘Blackout Date Dash,’ where pledges from the frat were handcuffed to pledges from a sorority and locked in a room.

The keys to the handcuffs were at the bottom of a fifth of hard alcohol and the pair could only be freed once they drank the liquor, the suit said.

The family’s lawsuit alleges that Smiley tried to convince Martinez’s parents that ‘ATO’s “family” drink ritual was not hazing because each of the families purportedly “willingly” took part, employing the same “appalling logic”’.

Six months later, on May 18, 2020, ATO entered into a ‘Conduct Resolution Agreement,’ admitted to violating WSU’s standards of conduct on hazing and agreed to a loss of recognition through May 15, 2026.

More than a year after that, Rovegno, Thomas and Valcik pleaded guilty and were charged. It’s unclear why it took so long. 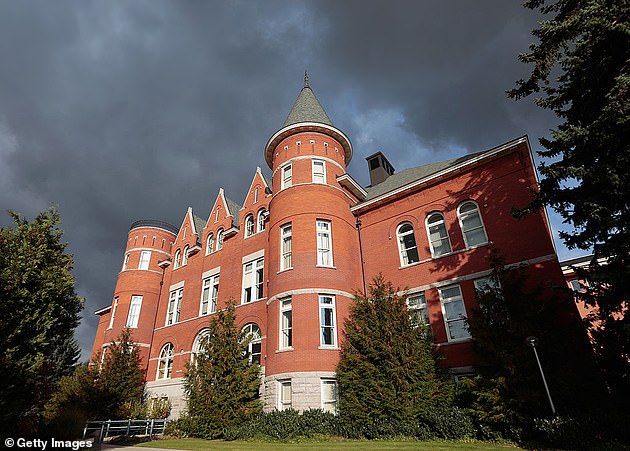 WSU (pictured) suspended the frat from operating until 2026 and ATO, as per suspension regulations, admitted to violating the university’s standards of conduct

Martinez is survived by his older sister Ariana Martinez, father Hector Martinez and mother Jolayne Houtz, who was a former reporter at The Seattle Times before becoming the director of communications and publications at the university where her son died.

Houtz penned in an op-ed for the local paper titled Our Son Was Hazed To Death – End This Toxic Tradition: ‘I sleep with my son’s ashes beside my bed. I cradle the black velvet bag each morning and night and tell Sam how much I miss him.’

She remembered her son as a ‘gifted athlete and community volunteer; a loyal brother and friend; and a quiet leader who loved soccer, gaming and cats’.

Houtz called the wounds ‘fresh and deep’ and said that ‘the college fraternity system is long overdue for the kind of reckoning many other American institutions now face for enabling and perpetuating violence, injustice and destructive behavior’.

She demanded ‘real enforcement’ of the drinking age at universities, a ban on students joining the Greek system until their sophomore year when they’re ‘more established’ and that hazing be made a felony ‘rather than a misdemeanor offense’.

Houtz then slammed WSU for their response to the crime – a mere six-year suspension. ‘In six years, Sam would be 26 years old, launching the business career he dreamed of, maybe thinking about marriage and children,’ she wrote.

‘And in six years, ATO can return to WSU and do it all over again to someone else’s son — unless we mandate real changes now in the fraternity system and the industry that it bankrolls,’ she added.

WSU and ATO have yet to comment on Martinez’s death.