A school headteacher has been sentenced to death by hanging in Pakistan for blaspheming against the Prophet Muhammad.

Salma Tanveer, who owned her own private school, was found guilty of distributing texts in which she denied Muhammad and claimed that she was Allah’s true apostle.

The judge in Lahore threw out arguments by her defence that she had ‘lost her mental balance’ at the time she made the writings.

People who are deemed mentally ill cannot be executed in Pakistan. 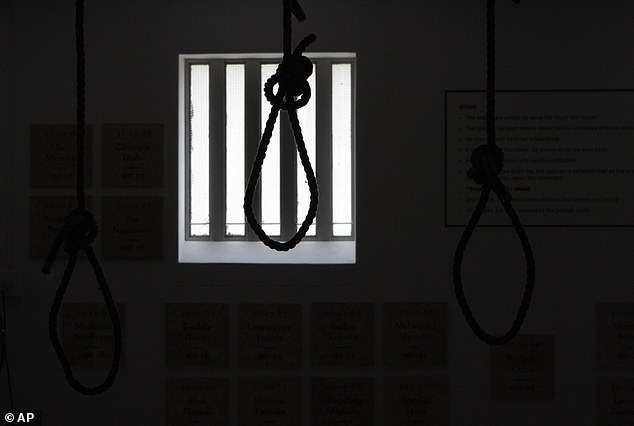 Salma Tanveer, who owns her own private school, was found guilty of distributing texts in which she denied Muhammad and claimed that she was the true apostle of Allah. She faces death by hanging (file photo)

This despite evidence from the Punjab Institute of Mental Health (PIMH) in Lahore which declared she was ‘suffering from Schizoaffecctive Disorder’ and ‘unfit to stand trial at present.’

That report was submitted in 2014, a year after the blasphemy was reported.

The trial was postponed in 2015 and a later report by the same board in 2019 declared Tanveer was fit to stand trial.

The case dates back to 2013 when a complaint was lodged by a local cleric against Tanveer.

It was alleged that she had ‘denied khatam-e-nubuwat of the Holy Prophet.’

Khatam-e-nubuwat is the belief that the Prophet Muhammad is the last apostle sent by Allah and that there shall be no more prophets after him.

The complaint said that Tanveer used derogatory remarks and claimed ‘her own nubuwat (apostlehood).’

Tanveer, of Lahore, was remanded in custody and faces death by hanging.

The death sentence must however still be confirmed by the Lahore High Court.

Tanveer has seven days to file an appeal before the High Court.

Under Pakistani law, using derogatory remarks towards the Prophet Muhammad is punishable by death.

the Pakistan Penal Code states: ‘Whoever by words, either spoken or written, or by visible representation or by any imputation, innuendo, or insinuation, directly or indirectly, defiles the sacred name of the Holy Prophet Muhammad (peace be upon him) shall be punished with death, or imprisonment for life, and shall also be liable to fine.’

But nobody has ever been executed under the blasphemy laws in Pakistan as higher courts have overruled or commuted the sentences.