He shoots, he POURS! Man Utd legend Paul Scholes is filmed using jerry can to top up his luxury Mercedes 4×4 by roadside as petrol crisis grips UK

Former England footballer Paul Scholes has been filmed filling up his Mercedes car on a roadside with petrol from a jerry can as fuel panic buying continues.

The ex-Manchester United star, who is now a TV pundit, was videoed unscrewing the cap on his luxury 4Matic next to a country road in an unknown location.

Scholes, 46, dressed in a black hoodie pulled up over his head, was seen being handed the can by another man before pouring the fuel into his 4×4 car.

The footage was filmed from another car and posted yesterday on the Instagram story of his daughter Alicia, 20, who plays netball for Manchester Thunder. 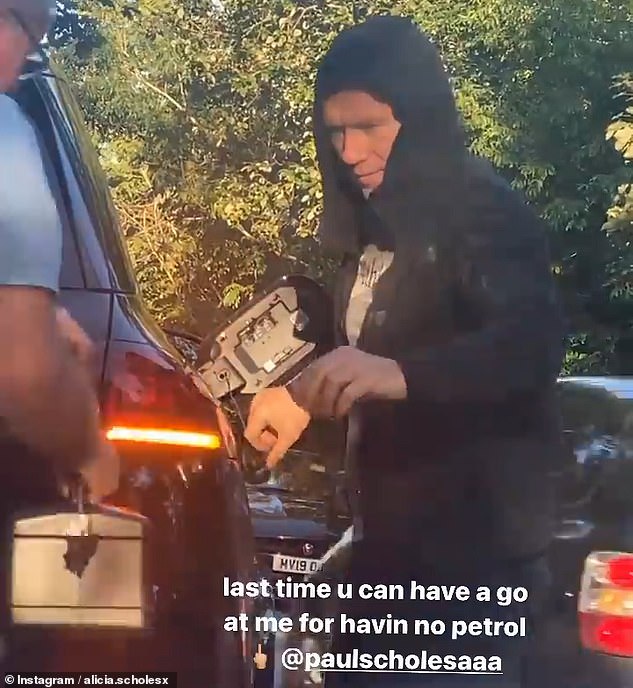 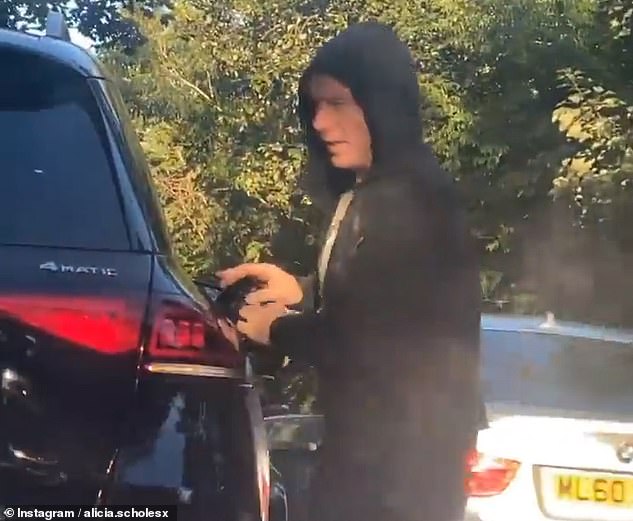 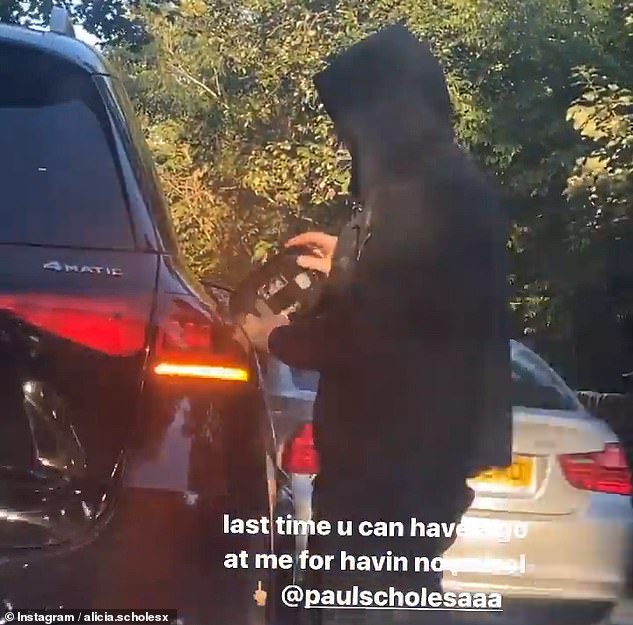 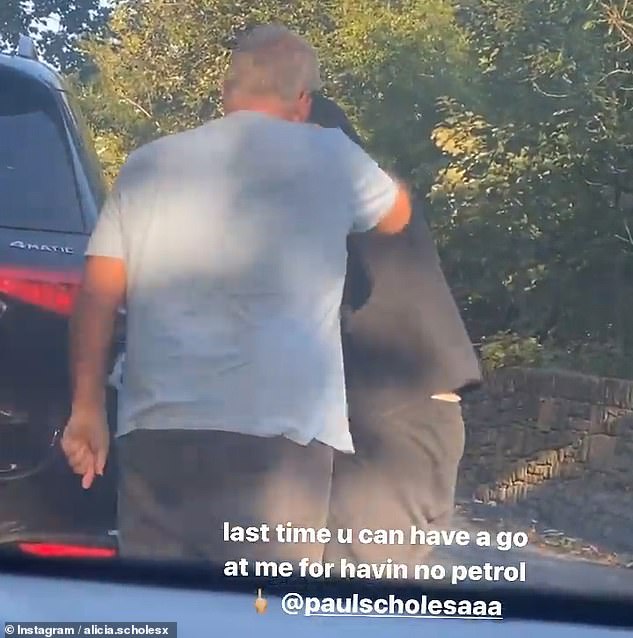 According to The Sun, a caption said: ‘Last time u can have a go at me for having no petrol, Paul Scholes.’ MailOnline has asked Scholes’s representatives for comment.

It comes as retailers warned the panic buying of petrol shows no sign of ending as filling stations in many parts of Britain continued to run dry today.

Long queues were again reported outside open stations, after the Government said it was putting the Army on standby in an effort to ensure supplies were maintained.

The oil companies have said they expect the pressure on forecourts to ease in the coming days, with many cars carrying more fuel than usual.

However the Petrol Retailers Association said this morning that there was little sign of that happening – with social media driving the dash to the pumps. 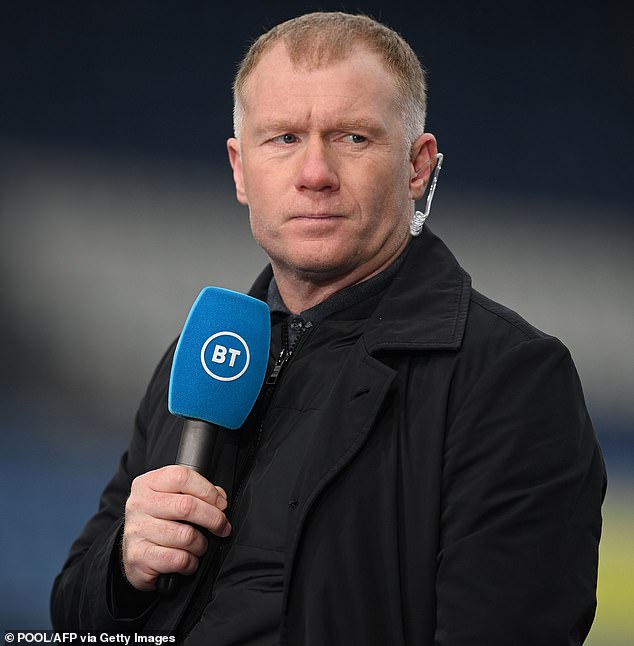 Scholes, who is a TV pundit, is pictured working for BT Sport at Leicester City last December 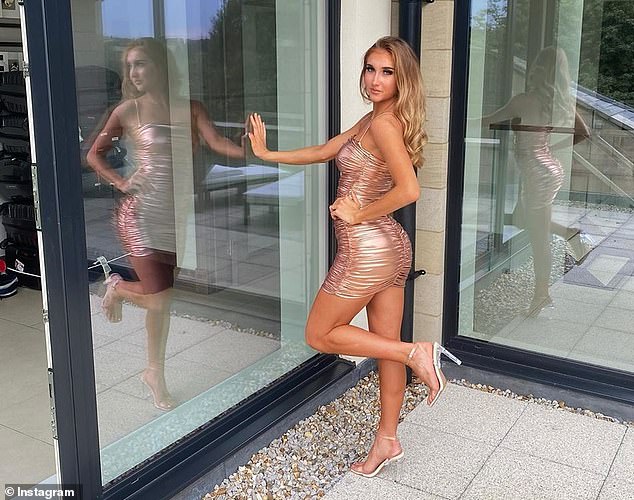 The footage was posted yesterday on the Instagram story of Scholes’s daughter Alicia, 20

Soldiers are being put on standby to deliver fuel, amid concerns that a shortage of tanker drivers was threatening the ability of the oil companies to maintain supplies.

Boris Johnson originally drew back from activating Operation Escalin – first drawn up to deal with the aftermath of Brexit – for troops to fill in and drive tankers.

The Prime Minister and the Government had been hoping that the queues would ease as people returned to more normal buying patterns.

However Business Secretary Kwasi Kwarteng, who issued the Military Aid to the Civil Authorities request, said putting troops on alert was a ‘sensible, precautionary step’.

Ministers have repeatedly urged the public not to panic buy, insisting the country has ‘ample’ supplies of fuel, but the calls appeared to fall on deaf ears. 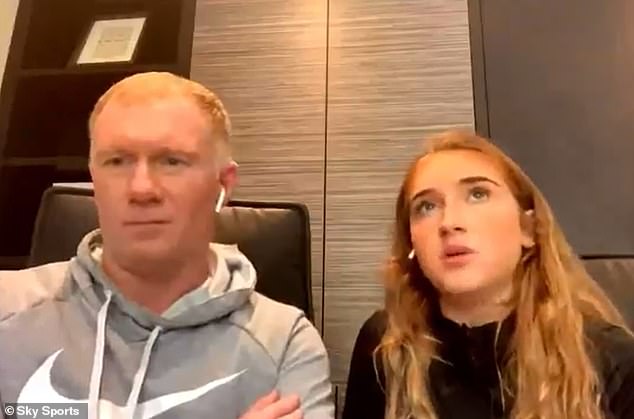 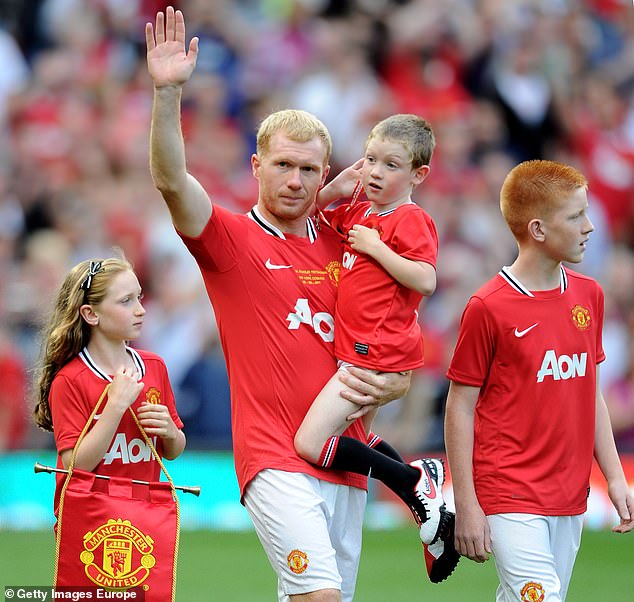 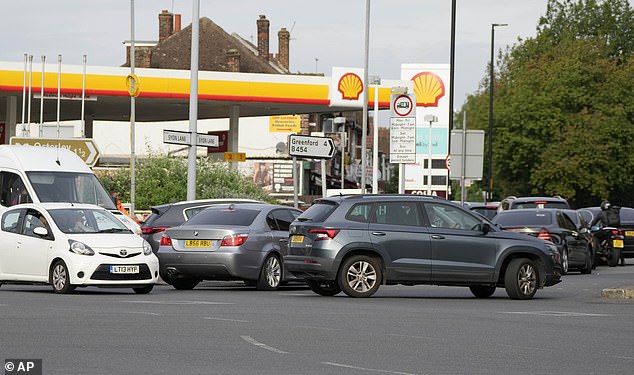 The Petrol Retailers Association reported that many motorists, when they were able to find a filling station that was open, were taking on far more fuel than usual.

Meanwhile the Government continued to face calls to give priority access to fuel supplies to healthcare staff and other essential workers.

The British Medical Association warned that essential services could be hit if staff were unable to get to work because they could not fill up.

And the NASUWT teaching union said priority access should also be given to teachers if children were not to face further disruption to their education.