Freedom Day for the anti-vaxxers: The date the unvaccinated will be able to live like the rest of NSW is revealed – as Gladys comes under fire for giving them ‘the exact same rights as everybody else’

All barriers will be lifted for everyone in New South Wales on December 1 after the new freedom roadmap for the state was revealed by Premier Gladys Berejiklian.

Under the roadmap, the barriers will dramatically disappear for everyone who is double-dose vaccinated, she said.

Deputy premier John Barilaro warned: ‘The message to the unvaccinated is is that you will not achieve any further freedom unless you get vaccinated.’

However almost all restrictions will be removed by December 1 even for anti-vaxxers. 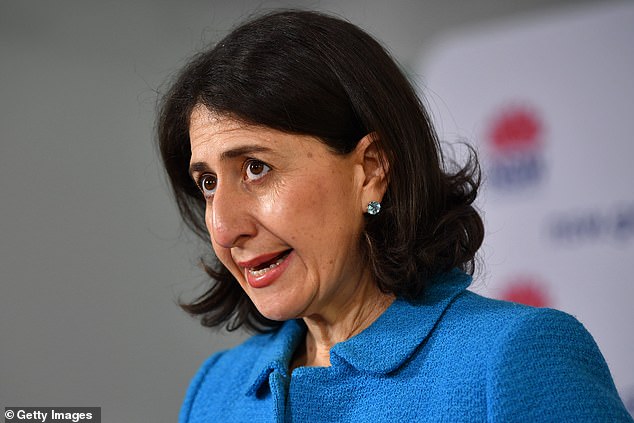 Under questioning, Ms Berejiklian conceded anti-vaxxers would eventually enjoy the same benefits as the double-dose vaccinated.

‘But it’s very important to note that, unlike most places in the world, if you’re not vaccinated, you’ll have to wait at least four or five weeks,’ she hit back.

It takes the toll for the current outbreak to 309.

This includes the resumption of travel to regional NSW, pushed back from 70 per cent coverage, and the ability to stand and drink at the pub.

It will also include the “consideration” of international travel.

On December 1, unvaccinated people will be able to reintegrate with society and the “four square metre” will revert to a “two square metre” rule.

More than 85 per cent of people over 16 have had at least one vaccine dose, while around 60 per cent are fully vaccinated.

Ms Berejiklian said it was extremely likely that the 70 per cent vaccination milestone would trigger freedoms from October 11.

Meanwhile, outdoor pools are permitted to re-open everywhere in NSW, with even the unvaccinated allowed to swim at pools within their local government area.

Construction sites in NSW are now able to return to full capacity with COVID safety plans, after previously being restricted to 50 per cent.

But he says business owners are still awaiting new public health orders about how to deal with vaccinated and unvaccinated people.

“The government has indicated it is going to be an individual accountability, so if you’re not vaccinated it’s actually going to be on you to not enter those premises,” he told 2GB.