‘It was the best day of my life!’: Arsenal youngster Emile Smith Rowe revels in Man of the Match display that he has ‘always dreamt of’ against Tottenham after starring with goal and assist in derby win

Emile Smith Rowe says it is the ‘best day in his life’ after his Man of the Match display in Arsenal’s 3-1 victory over Tottenham.

The Gunners ran rampant during the first half of the north London derby, with Smith Rowe opening the scoring before Pierre-Emerick Aubameyang and Bukayo Saka also found the net.

Smith Rowe got a goal and an assist for the Gunners who held on despite Son Heung-min’s late consolation. 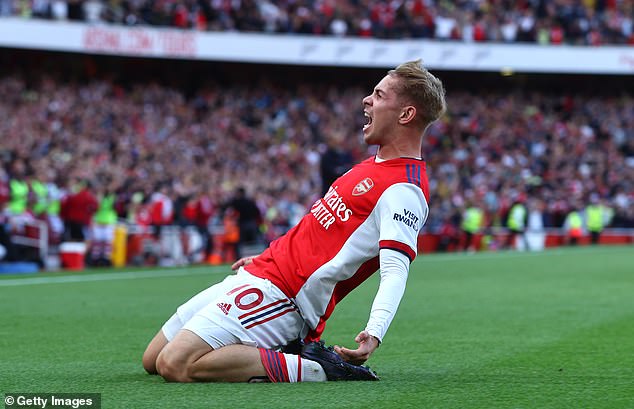 After the game, Smith Rowe told Sky Sports: ‘It’s the best day of my life. I’ve dreamed of this day to score against Tottenham.

‘With my family here as well, it’s the best feeling ever. I’ve been working a lot in training on my finishing and I am really happy with the goal.’

Smith Rowe also tweeted after the game again reiterating that it was the best day of his life.

Smith Rowe did the interview alongside Aubameyang who scored after an assist from the 21-year-old.

The Gunners striker said about Smith Rowe: ‘Arsenal can be proud of these boys because they’re great guys, they’re doing well.

‘It’s quite easy when you have boys like this. They always listen and ready to learn, I try to give them some advice sometimes, but most important that they feel free when they play and that’s what they did today. They’re doing amazing.’

Smith Rowe also took some time to praise manager Mikel Arteta who had come under some criticism after the Gunners lost their first three games of the season.

Arsenal’s win over Spurs is now their third in succession – while Tottenham have now lost their last three.

The midfielder said: ‘The manager, he just tells us to keep calm, we’re young players in a massive game. He encourages us so much and gives us so much confidence, not just the manager but the players in the team as well.’