Husband, 34, hanged himself after being ‘harassed’ by his estranged wife who he was too afraid to divorce, inquest hears

A husband hanged himself after being repeatedly ‘harassed’ by his estranged wife who he was too afraid to divorce, an inquest has heard.

James Hill, 34, was found in woodland near his mother’s home in Poole, Dorset, where he was staying after separating from partner Stacey Hill.

The couple had been together for six years until he moved out of the marital home in February 2019.

In the weeks and months that followed Mr Hill, a plasterer, said he wanted a divorce but feared his wife would falsely accuse him of raping her unless he stayed with her, the hearing heard.

His mother Carol Hill said her son was the victim of ‘harassment’ as Mrs Hill repeatedly called and messaged him after he left the family home in Corfe Mullen, Dorset.

Carol Hill said: ‘He was saying he wanted a divorce but was worried about what would be said about him.

‘He said Stacey would accuse him of rape and he was afraid of what she could do.

‘Sometimes he would say it was all so difficult and he didn’t know what to do.

‘He said it would be bad if he went back and bad if he left because of the threats he was receiving.

‘He was continually concerned that she would say things and that life would be a continual battle forever. 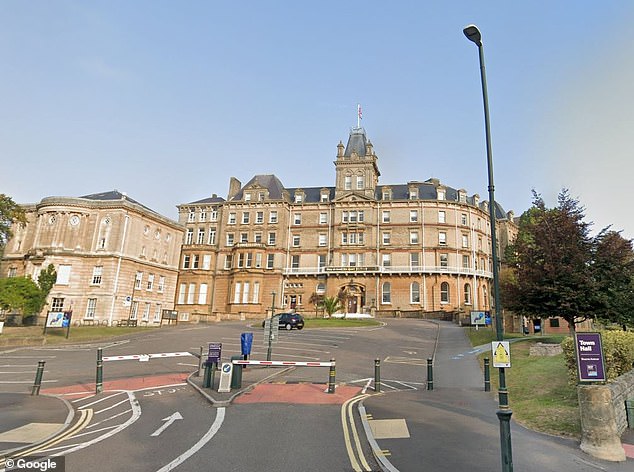 ‘He said she would always be there making life as difficult as she could.’

On the night of his death on May 6, 2019, Mrs Hill said her daughter-in-law ‘bombarded’ him with phone calls and requests to look at sexual images of herself.

She said: ‘He was getting phone calls through the night and I was concerned that he wasn’t getting any sleep.

‘The last call I was aware of was at half past 10 and she was asking him to look at dirty photos of her.

‘He was doubled over in agony. The calls were repetitious and he just kept listening.’

The Bournemouth inquest heard how four photos were sent by Mrs Hill to her husband, his family and several of his friends in the early hours on the morning of his death.

The inquest heard how both Mr and Mrs Hill had been receiving anti-depressants at the time of his death.

Mrs Hill said she did not know how the extent of her husband’s mental illness and ‘never expected’ him to take his own life.

She said she had a problem with alcohol and was drunk the night before he was found.

Speaking at the inquest, she said: ‘I don’t know why I did it – I only realised I’d sent them the next morning when I looked at my phone.

‘It was when I first found out he had been to see a solicitor. I can’t remember anything from that night.

‘He was the last person I ever expected to take their life.’

When asked if her behaviour constituted harassment, she said that it may have been ‘a bit much’.

She described her husband as a ‘good man’ who she loved dearly.

Mrs Hill said her husband had been in financial difficulty since the summer of 2018.

She explained that when he moved out in February they were still together and Mr Hill came home most evenings for dinner.

She later filed for divorce after Mr Hill failed to move back in but withdrew it when he said he wanted to work on their relationship.