A religious fanatic anaesthetist who almost killed his girlfriend after injecting her with drugs during an Islamic ‘exorcism’ has been jailed for 14-and-a-half years.

He made made dozens of recordings of himself administering fluids through a cannula to Kelly Wilson while chanting as part of a ‘dangerous perversion’ of the Islamic Ruqya ritual. 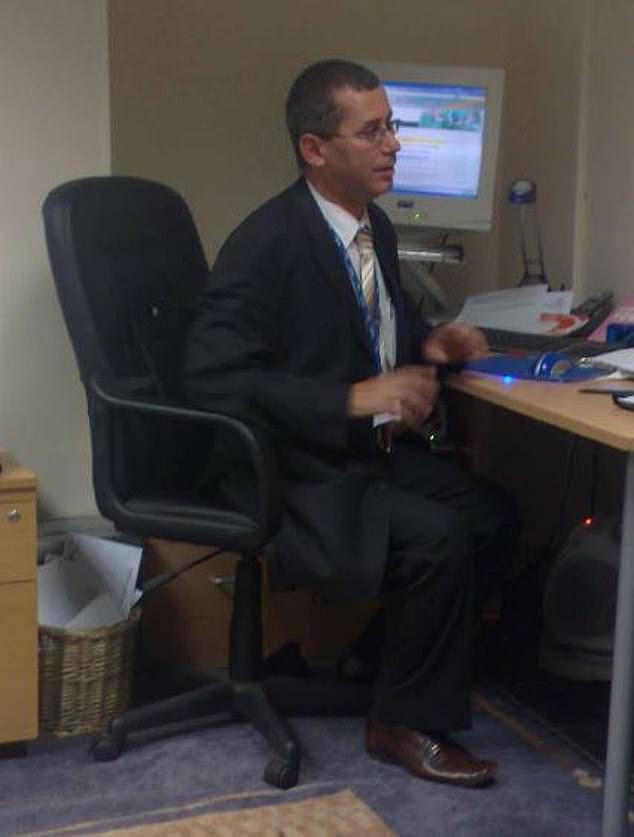 The trial heard how Metwally (pictured) had been performing exorcisms on Miss Wilson to ‘rid her of evil spirits’. He claimed he was helping her ‘out of kindness’ 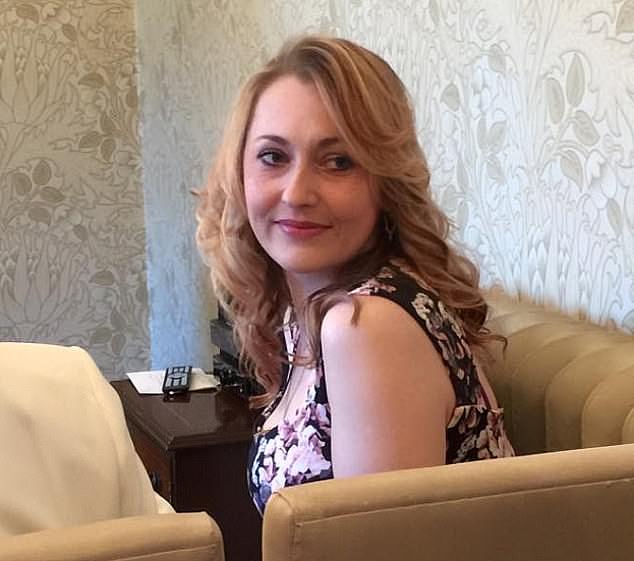 The jury had been shown extracts from 200 clips the doctor had recorded over his four-year drugging campaign, which mainly took place at his home in Grimsby, north-east Lincolnshire. The videos showed Kelly Wilson (pictured), 33, being injected with unknown substances via a tube attached to her chest as Metwally chanted verses from the Quran

The father-of-four, who also ran his own pain clinic from his home in the town, also filmed two female patients without their knowledge.

Ms Wilson was found at Metwally’s home in Grimsby, North East Lincolnshire, on July 4, 2019, in a deep coma, on the brink of a cardiac arrest and with a fluid line inserted in her chest after engaging in an exorcism ritual the previous evening.

The court heard on Monday that he took pictures and moving footage of the women, without their knowledge and in a state of undress, when they attended his clinic for treatment.

He was sentenced at Sheffield Crown Court on Monday for endangering Ms Wilson’s life by the intravenous administration of anaesthetic drugs, supply of various controlled drugs or medicines, possession of a controlled drug with intent to supply, fraud and voyeurism.

Sentencing Hossam Metwally at Sheffield Crown Court, Judge Jeremy Richardson QC, the Recorder of Sheffield, told him he was a ‘disgrace’. 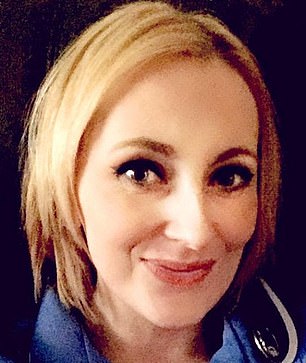 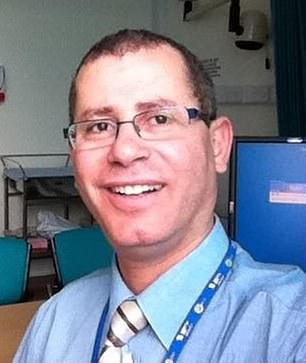 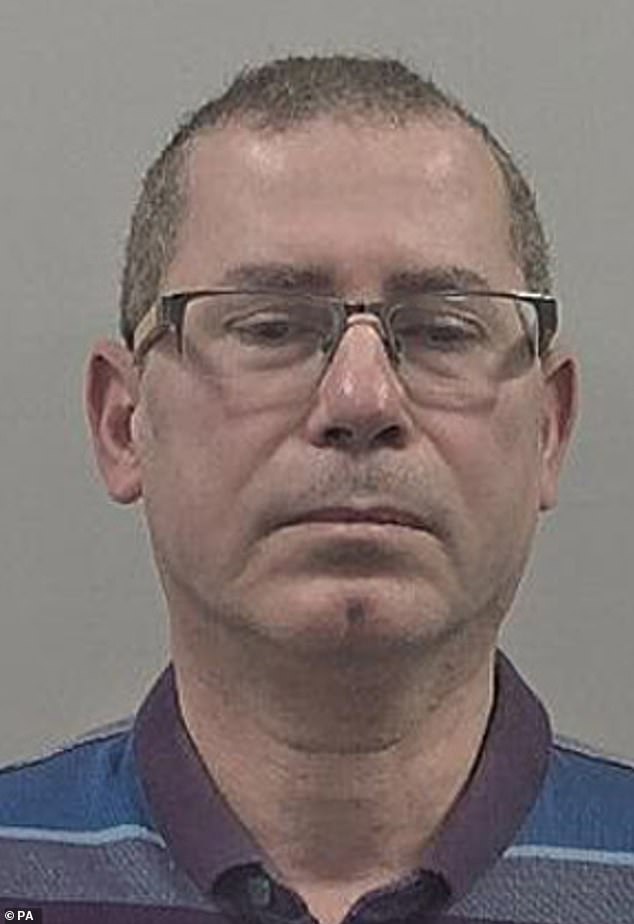 Hossam Metwally (pictured), 61, caused multiple organ failure in Kelly Wilson, 33, after feeding her drugs through a cannula during a series of exorcism ceremonies

He said: ‘You are a disgrace to your profession. You will not be a doctor for very much longer. I trust you will never, ever be a doctor again.

‘You perverted medical practise for your own ends.

‘You are also not a very good doctor because, in these perverted practices, you very nearly killed the woman you said you loved.’

Metwally qualified as a doctor in Egypt and worked in Saudi Arabia before coming to the UK in 1996 and Grimsby in 1999.

The process of Quranic healing in order to exorcise spirits can be divided into three stages.

The first includes removing any distractions, such as music instruments and golden jewelry.

The healer also removes all pictures in the room allowing angels to enter.

The healer then tells the client and the family, that everything happens by God’s will and that he is merely a mediator, also mentioning that other forms of healing, such as by sorcery, are not acceptable to Islam.

In the second stage, the healer determines if the client is possessed or not and tries to enter a dialogue with the spirit.

The healer might ask the spirit about type (Zar (red wind), ghosts (Arwah), jinn (genii), samum (devils), div), religion, sex or reason for possession. When he asks the client, instead of the spirit, about dreams and feelings involved of the dream.

After that, the healer cleans himself, the room, and asks the people in the room to do the same.

In the third stage, actual exorcism begins by reciting Quranic verses such as Al-Fatiha, Al Baqara, Al-Baqara 255, Al-Jinn and three Qul (Al-Ikhlas, An-Nas and Al-Falaq), depending on the type of spirit.

Other treatments include using honey and water, as a purification ritual to clean the soul and body from sins.

In a typical Islamic exorcism the treated person lies down while a white-gloved therapist places a hand on their head while reciting verses from the Quran.

He met Ms Wilson, now 33, in about 2013 when she was a student nurse. The jury heard she had a history of depression and her health deteriorated so she stopped working as a nurse.

Metwally had a ‘vast stock of drugs’ at his Laceby Road home, including ampoules of ketamine, propofol, fentanyl and Diazemuls.

The trial heard that he ‘fed’ Ms Wilson’s drug addiction and administered potentially lethal anaesthetic drugs to perform Muslim exorcism rituals known as Ruqya – a valid practice that an imam told the court would never involve drugs or sedation.

Judge Richardson described Metwally as a ‘religious fanatic’ and said the rituals he carried out on Ms Wilson were ‘sham religious acts’.

He said: ‘It may be the case that, in some perverted way, you believed you were assisting the woman you profess to love, but you went about that in a bizarre way by botched medical procedures and the administration of potent drugs which regularly endangered her life and, on at least one occasion, nearly killed her.

‘This was all done under the guise of a religious practice. It was entirely bogus. What you did had nothing whatever to do with legitimate Islamic religious ritual.’

Extracts from 200 clips recorded by Metwally over four years were shown to the jury.

They included footage of Ms Wilson strapped to a bed, in a bath and of a white liquid being administered – on occasions using an electronic device.

In one clip from 2016, Metwally can be heard chanting and after he revives his partner with smelling salts, she asks ‘have you raped me?’ and requests the police.

Judge Richardson told Metwally: ‘Your conduct was deliberate, persistent and repeated. It was extremely dangerous to do as you did.

‘You were a doctor at the time and misusing your medical skills, such as they were, in a perverted and illegitimate manner.

‘Furthermore, you were in an abusive relationship with a vulnerable woman who was infatuated with you.

‘You exploited her vulnerability and exposed her to a great physical danger.’

Judge Richardson said Metwally had displayed ‘not a shred of remorse’ and ‘exhibited large amounts of arrogance’ during the trial.

He described the case as ‘both very serious and utterly bizarre’ and said he had never been involved in a trial like it during his 41-year legal career.

Detective Chief Inspector Rhodri Troake, of Humberside Police, said: ‘The offences Dr Metwally committed were extremely serious and an abuse of his position and the trust his victims had in him.

‘He is now exactly where he belongs, in prison.’

Female patients said they have been left ‘shocked’ and ‘broken’ after they were secretly filmed in a state of undress by a doctor at his pain clinic.

Police uncovered numerous still and moving images of the women on a hard drive found in Metwally’s home during an investigation into the poisoning of his partner in a series of exorcism rituals.

She said the woman had got to know Metwally and referred herself to him when she developed back and neck pain.

Ms Kelly said: ‘She trusted him as a doctor, she thought he was good at his job and he had an established practice.’

The court heard that Metwally insisted on following the woman home after her first appointment, and massaged her back during another appointment while she was wearing only a bra.

Ms Kelly said: ‘It’s clear from the images of her, both still and moving, that he had developed a sexual interest in her.

‘He had captured images of her while she was working but further invading her privacy, filming her in that state of undress when she was at his clinic.’

The prosecutor said the woman was ‘totally unaware’ the recordings were taking place.

She added: ‘In addition to the images captured of her in a state of undress in his pain clinic, his sexual interest in her was demonstrated by other images he had saved of her, which he had downloaded from her Facebook account and edited by adding indecent images of body parts to parts of her body.

‘Having seen all the images she felt sick to her stomach.’

In her victim personal statement, the woman said finding out she had been filmed by Metwally had affected her in many ways and she is unable to see a time when she could trust people again.

Ms Kelly said: ‘She describes this particular offending against her as having broken her.’

The second woman attended Metwally’s clinic six or seven times suffering back pain and was naked from the waist up on each occasion.

She was captured on a number of images, and where her breasts were visible Metwally had zoomed in or altered the image.

He also made inappropriate comments to the woman, including asking her how old she thought he was and if she would consider being his assistant if he paid her in cash.

Ms Kelly said the woman had been left ‘shocked’ by the offences, had lost her trust in people and was now worried about future medical appointments.

When Metwally was interviewed, he claimed to have no knowledge of the files and said commenting on or looking at photographs showing nudity was against his religious beliefs.

He claimed someone else had accessed his home computer but an IT expert found no evidence of hacking.

He eventually pleaded guilty to two counts of voyeurism at Sheffield Crown Court in August after a jury found him guilty of endangering his partner’s life by the intravenous administration of anaesthetic drugs.

Sentencing him on Monday, Judge Jeremy Richardson QC, the Recorder of Sheffield, said: ‘Both (of the women) have been badly affected by what you did to them.

‘It was a grotesque breach of trust by you as a doctor.’

Kelly Wilson, 33, was found barely alive by her family in 2019 after her partner Hossam Metwally, 60, had performed yet another ‘exorcism’ on the ex-nurse while pumping her body with drugs.

A jury at Sheffield Crown Court heard how Metwally held a ‘vast stock of narcotics’ at his home, including ampoules of ketamine, propofol, Diazemuls and fentanyl.

Propofol is used to put you to sleep and keep you asleep during general anesthesia for surgery or other medical procedures.

Fentanyl is a drug up to 100 times more powerful than morphine and which is often used outside of the medical profession by drug dealers to make narcotics like heroin stronger.

Over a four-year period, Metwally repeatedly performed his ‘ceremonies’, which he claimed were for Miss Wilson’s benefit to rid her of ‘evil spirits’.

The doctor, who trained and worked in Egypt and Saudi Arabia before moving back to Britain in 1996, was performing his own ‘perverted’ twist on a traditional Islamic healing ceremony known as a Ruqya.

But instead of using prayer and honey or essential oils, he injected his girlfriend with drugs via a tube attached to her chest.

The court heard how he administered the drugs on hundreds of occasions, feeding on Miss Wilson’s addiction.

Prosecutors said he abused his position to control Miss Wilson, who battled with depression.

Metwally would also record his rituals, with hundreds of videos seized by the police being shown to the jury – who had to be warned about their disturbing nature.

Some of the recordings show Miss Wilson strapped to a bed, in others she is in a bath, and some show a white liquid being administered – on occasions using an electronic device.

In one clip from 2016, Metwally can be heard chanting and after he revives his partner with smelling salts, she asks: ‘Have you raped me?’ and requests the police.

The years-long abuse left Miss Wilson with multiple organ failure. She was found in a bed at her home wearing an oxygen mask before being rushed to hospital – where doctors feared she would die.