The owner of ‘Gigantic Signs’ has banned shoppers who have received the vaccine from entering his store.

Peter King placed a sign in the storefront window of Gigantic Signs on King William Street in Kent Town, Adelaide.

A warning is written in bold red letters telling vaccinated residents they are no longer welcome.

‘Do not enter if you have been Covid-19 vaxxed,’ the sign reads.

The sign has sparked outrage in the community with residents labelling it unfair. But a legal expert has warned the store owner has not broken the law. 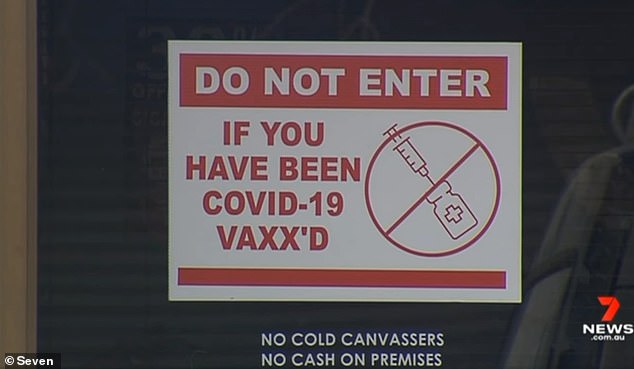 University of South Australia emeritus professor Rick Sarre said no discrimination laws around vaccination status have been made.

‘We have here in Adelaide a company that said they did not want to have any people going to their winery that weren’t vaxxed and I thought that was grossly unfair and intimidating.’

Outraged shoppers have sworn to boycott the business with many airing their frustration on social media.

‘I’d say Gigantic Signs have made a gigantic mistake by displaying a not so gigantic sign in the front door,’ one person wrote.

‘Don’t carry on and ask for help when the business takes a gigantic nose dive.’

Another person added: ‘I pledge not to enter your establishment, ever. I promise. I will never darken your door with my patronage. Choices and consequences.’

The store owner refused to comment further when contacted by Daily Mail Australia.

The sign adds to the growing debate over the power of businesses to refuse service to unvaccinated shoppers. 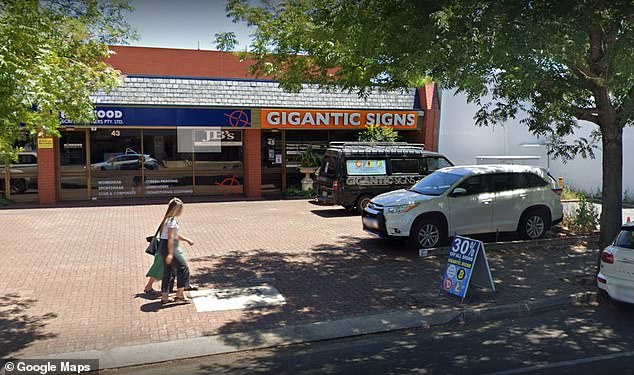 The owner has placed a sign in the storefront window of Gigantic Signs on King William Street in Kent Town, Adelaide

NSW and Victoria intend to rollout a vaccine passport allowing the double-jabbed to return to hospitality venues and retail stores when the states begin to reopen at 70 per cent vaccination.

Unvaccinated residents have been told they will be unable to enjoy the same freedoms as their vaccinated counterparts.