A metal detectorist thinks he may have discovered the 800-year-old long lost treasure of King John on a farm in a Lincolnshire village.

Raymond Kosschuk, 63, is ‘100 per cent certain’ the medieval artefacts he has uncovered at an undisclosed site belonged to the former King of England.

The mechanical engineer has spent the last 12 months conducting tests at the location in Sutton Bridge, Lincolnshire, in a bid to track down the allusive hoard. 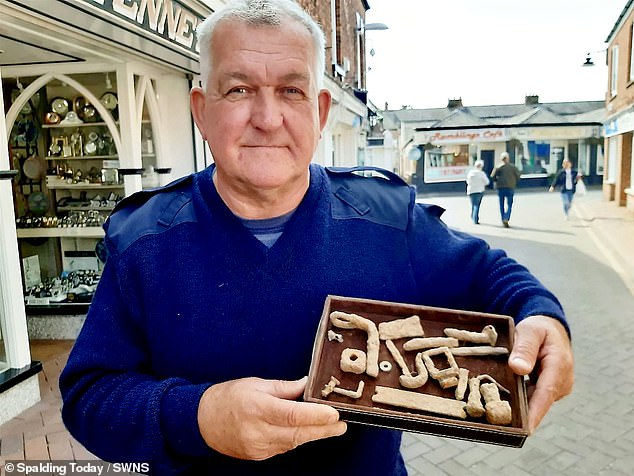 Raymond Kosschuk, 63, is ‘100 per cent certain’ the medieval artefacts he has uncovered at an undisclosed site belonged to the former King of England 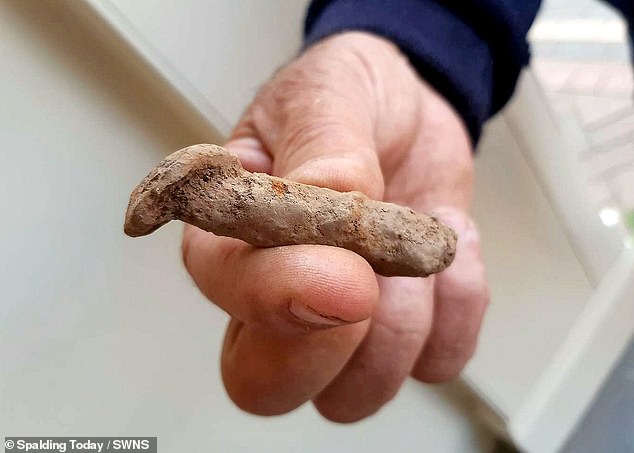 King John, who signed the Magna Carta a year before his death in 1216, lost the treasure during an ill fated crossing of The Wash

WHEN IS A FIND CLASSED AS TREASURE?

The following are Treasure by law in England, Wales and Northern Ireland, according to the British Museum:

Any metallic object, other than a coin, that at least 10 per cent by weight of metal is precious metal and that it is at least 300 years old when found.

If the object is of prehistoric date it will be Treasure provided any part of it is precious metal.

Any group of two or more metallic objects of any composition of prehistoric date from the same find.

If the coins contain less than 10 per cent of gold or silver there must be at least ten of them.

Only the following groups of coins will normally be regarded as coming from the same find:

Any object, whatever it is made of, that is found in the same place as, or had previously been together with, another object that is Treasure.

Any object that would previously have been treasure trove, but does not fall within the specific categories above.

Only objects that are less than 300 years old, that are made substantially of gold or silver, that have been deliberately hidden with the intention of recovery and whose owners or heirs are unknown.

He is now convinced he has struck gold after his equipment is picked up ‘overwhelming evidence’ of the treasure.

Raymond and the farmer are hoping to start digging out their findings in the coming weeks before submitting them to archaeologists and Lincolnshire’s Finds Officer.

King John, who signed the Magna Carta a year before his death in 1216, lost the treasure during an ill-fated crossing of The Wash – an estuary that divides Lincolnshire and Norfolk on October 12, 1216.

Dying only a week later at Newark Castle, Nottinghamshire, from dysentery – or according to some historians by drinking poisoned ale – the hoard has been undiscovered ever since.

Now, after gaining access to the site on September 7, Raymond believes he has solved the mystery of the controversial monarch’s lost treasure.

Using equipment he has designed to pick up anomalies in the readings of magnetic fields, Raymond has received strong signals for high-value items.

He has already recovered a wealth of artefacts during a quick sweep with a metal detector including hammered blots, nails, an eyelet and even a metal buckle.

Raymond, of Keighley of West Yorks., said: ‘I am 100 per cent certain that this it. This is the real thing.

‘When I gained access, I isolated an area of high-value targets and it tested positive for elements of gold, silver, emeralds, sapphires and rubies.

‘The biggest attraction of this area I detected is an accumulation of silver.

‘This tells me there is between 60lb-120lb of silver but it could be more. I believe this was the cash box that King John was carrying.’

Raymond has also had positive tests for gold and hopes to have found the Royal Regalia from the 13th century which was lost when the treasure disappeared.

He said: ‘There is something there or I won’t have the high readings or reactions that I am getting.

‘It is sitting out there and if it was so easy to find it would have been found. This has been hidden for 800 years.’

Raymond believes that King John had set off from King’s Lynn, Norfolk, without a guide and the baggage train, made up of 2,000 people and more than a mile long, was then caught up in a thick fog.

He added: ‘I have seen that heavy fog and in the 13th century they did not have compasses.

‘If the sun was blocked out because of the fog, they would have meandered off.’ 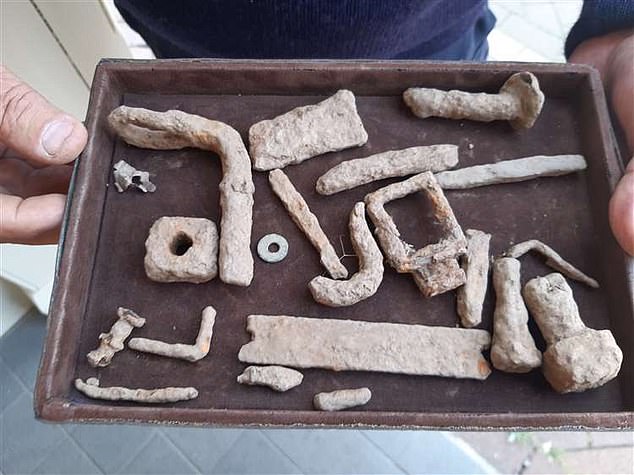 Finding readings for horse shoes in sets of four, Raymond believes that there ‘is no question’ that his finds are compelling evidence that this is the treasure

Finding readings for horse shoes in sets of four, Raymond believes that there ‘is no question’ that his finds are compelling evidence that this is the treasure.

He said: ‘Those horse shoes are completely damning evidence – there is no question.

‘The field is littered with this kind of find.

‘I have never seen anything like the field itself. It is phenomenal the amount of readings it is giving off there.

‘I expect to find items anywhere between 2ft and 11ft down.’