A school board member has been condemned over a slew of offensive tweets – including one where she bragged about hitting her sexual peak and demanded someone bring her an 18 year-old boy.

Kate Bishop, who was appointed as a member of the Chula Vista Elementary School District board in California in 2020, dismissed her messages on Twitter as ‘past mistakes’ and said they were meant to be funny.

‘I’m pretty sure I hit my sexual peak today. Somebody bring me an 18 year old boy, STAT!’ Bishop tweeted in 2012, with the hashtag ‘hormones.’

Parents bashed another tweet, posted in 2011, which read, ‘Off to the park to see what hot 3-year-old girls my kid can hit on,’ with the hashtag ‘#ValentinesDay.’ 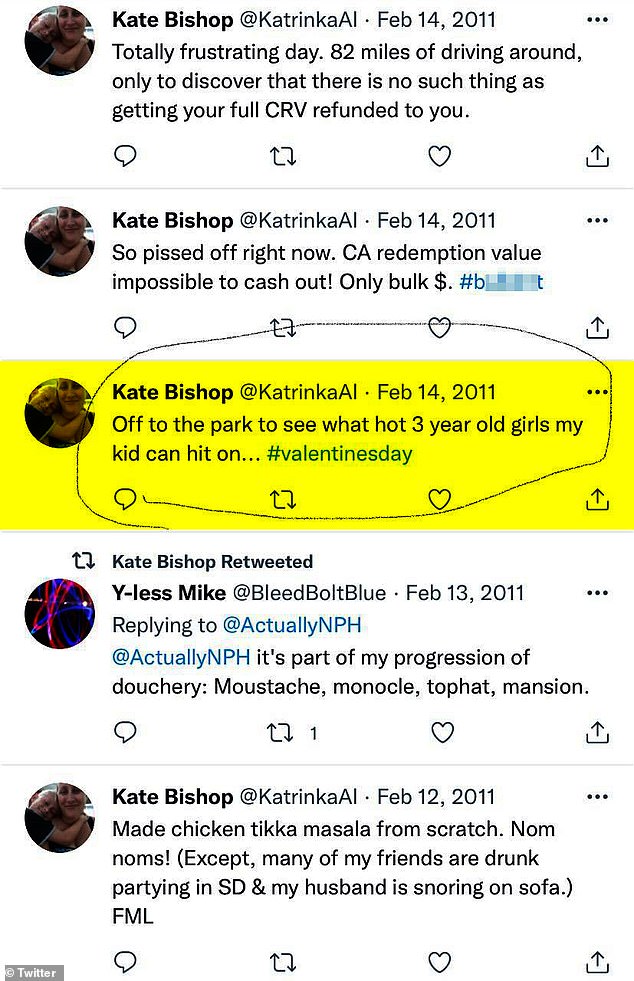 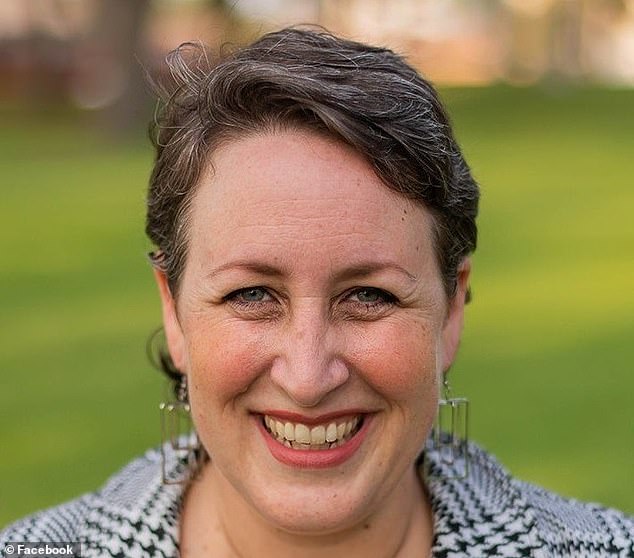 Parents in Chula Vista, California are demanding answers from Kate Bishop (pictured), a member of the school board whose years-old vile messages on Twitter recently went viral after a concerned father shared them on social media

Katie Davidson-Brock, a Chula Vista local and mother of three children, one of whom attends Chula Vista Elementary School, told Fox News in an interview on Tuesday, ‘I think that someone with this type of character is unfit to serve.’

Davidson-Brock doesn’t seek Bishop resignation, but she did demand answers.

‘I get that most of this stuff is just bad jokes but I would still like to hear or the district address it,’ Davidson-Brock said.

Kimberly and Matt Dickson, parents of two, called on Bishop to step down, calling her tweets ‘jaw-dropping’ and raising their concerns about the school district not taking action to such behavior.

The father who shared these two old tweets, Joe Thomas, among other parents, posted on Facebook last week: ‘Her comments are appalling, disturbing and unprofessional for any educator in the public school system,’ he wrote.

Thomas that Bishop switched her Twitter account to private mode 24-hours after he reached out to the superintendent’s office on Thursday. 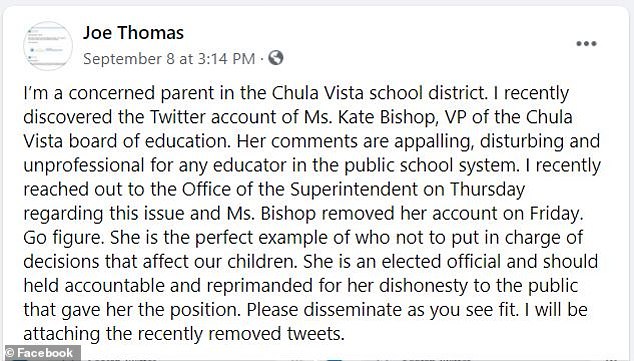 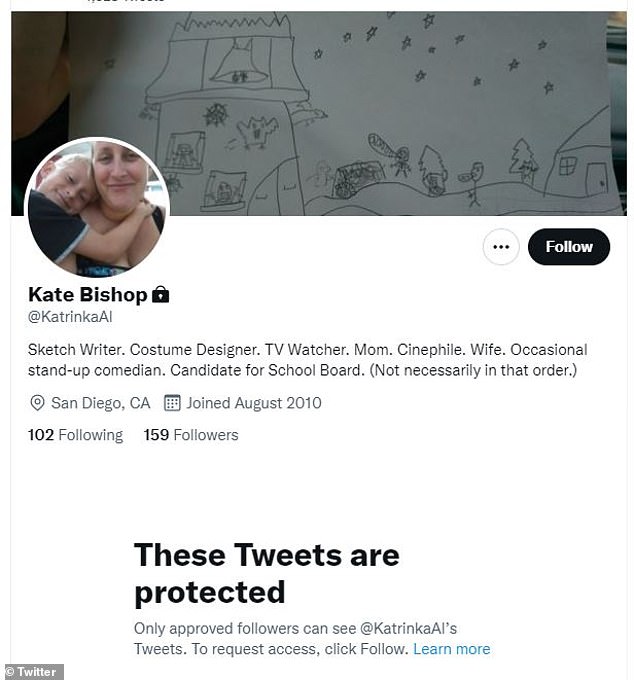 He also shared a picture of the school district’s response to him, suggesting that they had merely given Bishop a verbal slap on the wrist.

‘Ms. Bishop received the Let’s Talk Dialogue on Friday. I am not aware if there was any further action taken regarding this dialogue,’ assistant to the superintendent and school board, Nancy Teehan wrote back, according to the posted screenshot.

‘She is the perfect example of who not to put in charge of decisions that affect our children,’ Thomas added.

‘Those tweets, I feel, are disqualifying for anybody involved in K-12 education,’ he argued. 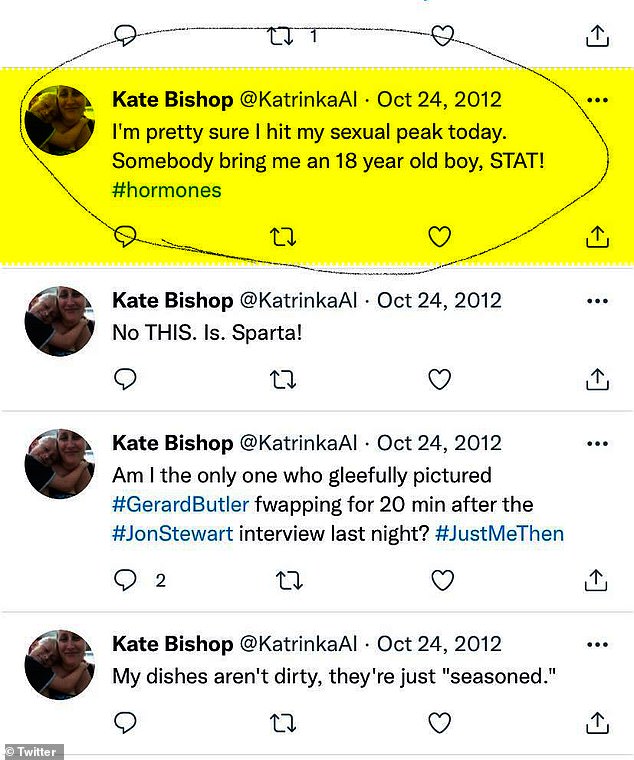 The second of the two ‘vile’ tweets Bishop wrote that concern Chula Vista Elementary School District parents the most says : ‘I’m pretty sure I hit my sexual peak today. Somebody bring me an 18 year old boy, STAT! #hormones’

‘To choose an 18-year-old boy as opposed to somebody her own age, it appears to have a predatory context,’ he said, adding that Bishop seemed to be ‘looking for somebody young and vulnerable. Having somebody who looks at young people in that manner is very scary.’

‘If she’s a leader with this kind of – in my opinion – predatory thought process, is this going through the rest of the board and of the school district? Is there an acceptance of this kind of behavior?’ Dickson added.

The school district’s parents also highlighted a tweet from 2011, in which Bishop said she was ‘Off to the park to see what hot 3-year-old girls my kid can hit on,’ with the hashtag ‘#ValentinesDay.’

Davidson-Brock said Bishop didn’t reflect her acclaimed image of being ‘a parent advocate’ and ‘activist’ but she argued that Bishop ‘doesn’t represent Chula Vista. This isn’t how the people I know talk.’

The mother of three also noted that there were comments that ‘just don’t have any place being written by someone who serves on a school board.’

In a 2012 message, Bishop wrote, ‘I wanna hate-f*** (former House Speaker) Paul Ryan, while he is g*gged with my absentee ballot on which I voted for Obama.’

In 2013, she wrote about having a d**do purchase on her credit card statement.

On Election Day 2016, she wrote of Donald Trump, ‘Dear Rust Belt, He lied. Your manufacturing jobs are NEVER coming back. You f***ed us. No love, Kate.’ 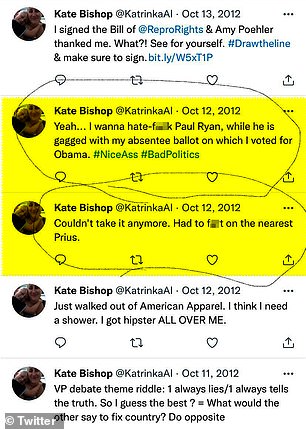 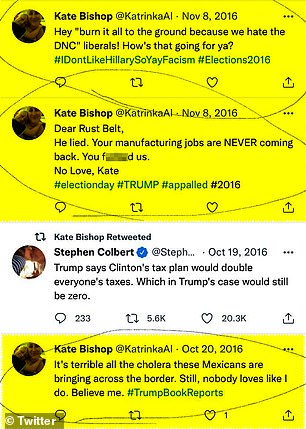 Kate Bishop, who was appointed as a member of the Chula Vista Elementary School District board in 2020, acknowledged her messages on Twitter as ‘past mistakes’ and said they were meant to be funny

Davidson-Brock also spotlighted a 2016 tweet in which Bishop mock-quoted Trump.

‘It’s terrible all the cholera these Mexicans are bringing across the border. Still, nobody loves like I do. Believe me,’ she tweeted with the hashtag ‘#TrumpBookReports.’

‘Not everybody gets that,’ Davidson-Brock said. ‘A lot of people think she’s talking about Mexicans, they don’t realize that this is a poke at Trump.’

‘I understand she may have been joking,’ Davidson-Brock admitted. Even so, she insisted that ‘someone with that type of character shouldn’t be making decisions for our children.’

‘The social media posts occurred years before Kate Bishop’s election to the Board of Education. Her personal tweets do not represent the opinions or beliefs of the Chula Vista Elementary School District,’ Esquivel wrote.

Kimberly Dickson asserted that the age of the tweets is irrelevant.

‘The content of the tweets puts her character into question, whether they were made last week, last year, or ten years ago,’ she said. ‘Is the fox watching the henhouse?’

Bishop issued a response to her tweets in a statement to Fox News on Tuesday, saying, ‘As a parent involved in education, I see this as a teachable moment that things put on the internet last forever. The intent of these tweets was meant to be funny, but they weren’t, and without context years later, they have actually hurt people that I care about.’

‘I own my past mistakes and I have been more mindful of things that I post publicly online since then,’ Bishop concluded.