A Florida sheriff says there’s ‘no doubt’ that two police dogs took gunshots meant for officers in the violent arrest of a man accused of carjacking a Lyft driver at gunpoint over the weekend.

K-9s Ax and Endo were shot Saturday while looking for Shedrick Singleton, Jr., 21, who escaped into the woods in Deltona – about 30 miles north of Orlando – after he held a gun to the head of a Lyft driver and stole his minivan, police say.

‘There is no doubt that K-9 Ax and K-9 Endo took bullets that were meant for my deputies,’ Volusia County Sheriff Mike Chitwood said at a press conference Saturday afternoon.

‘If the deputies would have gone into the woods, the first person to come in contact with Singleton, without a doubt, would have been shot.’

No officers were injured and the dogs are recovering at home as of Wednesday afternoon, the sheriff’s office says, but suspect Singleton is still in the hospital with life-threatening injuries after he was shot by officers during the encounter. 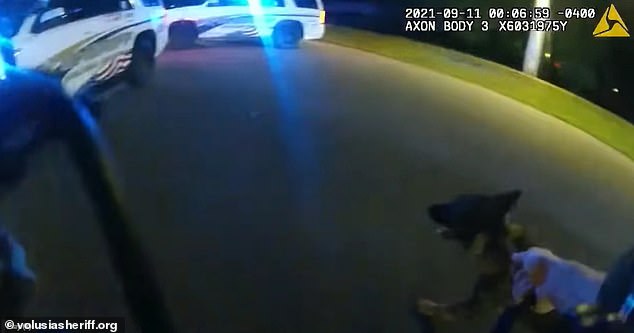 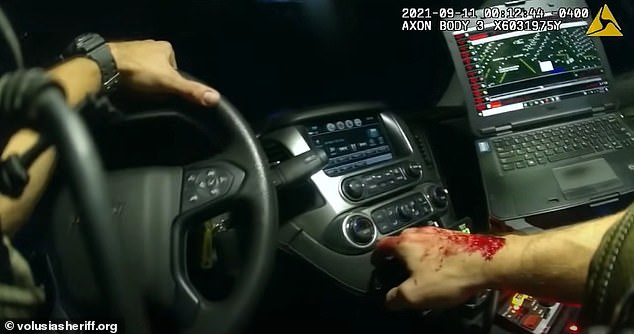 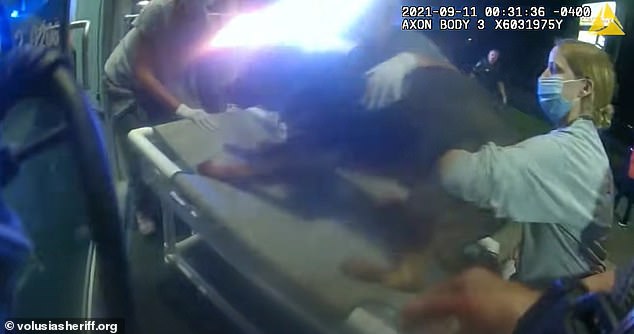 Ax was treated at a nearby 24-hour veterinarian, as seen in bodycam footage

Ax was shot in the face shortly after midnight Saturday. The dog was leading Deputy A.J. Davis into a wooded area near an apartment complex and a Lowe’s hardware store, where Singleton was hiding after police spotted him driving the stolen Kia Sedona minivan.

In chilling bodycam footage, Davis retreats from the middle-of-the-night shooting and yells: ‘S***! No, he’s shot in the face. He shot my dog.’

He loads Ax, who at this point is scoffing repeatedly, into the back of the police cruiser.

‘God**** it! You’re all right, buddy,’ Davis shouted as he drove to a 24/7 veterinarian clinic with a bloody hand. 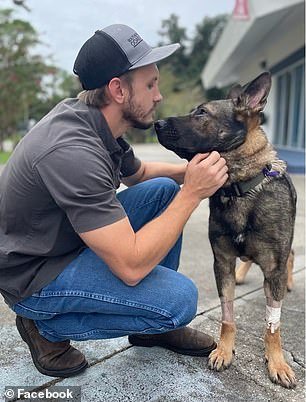 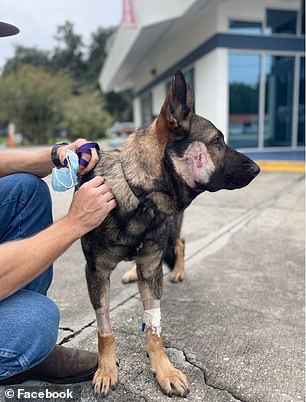 The dogs recovered within hours. Above, Deputy A.J. Davis and Ax, who was shot in the face 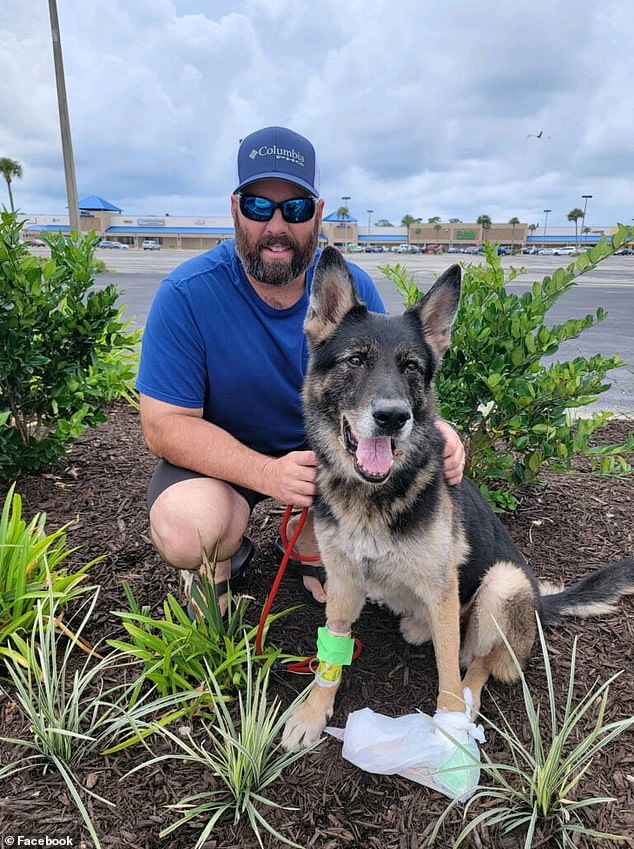 ‘These guys are right back on their feet,’ deputies said Saturday, hours after the early morning incident. Above, Deputy Brett Whitson and Endo, who was shot in the paw and chin

Singleton was spotted coming out of the woods hours later at about 2.20am, when officers were already angry about the shooting of Ax.

‘He shot the dog! What the f*** is wrong with you?’ officers yell as they catch Singleton on the ground, shooting him several times.

He was transported to Central Florida Regional Hospital in Sanford with life-threatening injuries.

K-9 Endo was shot in the paw and the chin during that second encounter.

The Volusia County Sheriff’s Office posted photos on Facebook of Ax and Endo recovering comfortably at a clinic just hours after the shooting. 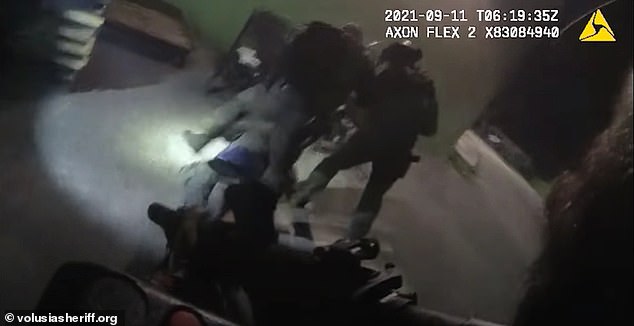 Singleton was later apprehended after exchanging gunfire with officers. He was transported to Central Florida Regional Hospital in Sanford with life-threatening injuries

‘These guys are right back on their feet. Thank you all for your kind words, support and prayers,’ the department said.

A Lyft driver reported the carjacking that led to the dogs’ shooting at about 11.30pm Friday.

The driver said he picked Singleton up near Sanford and drove him to a remote stretch.

‘The Lyft driver said the suspect held a gun to his head and forced him to get out of his white Kia Sedona minivan before stealing it. About 15 minutes later, the stranded victim, whose phone was also stolen in the carjacking, flagged down a passing vehicle for help,’ deputies said.

Singleton abandoned the Kia and retreated to the woods when he was spotted by police.

‘The stolen minivan was entered into the License Plate Reader hotlist and later spotted on Lake Helen Osteen Road. Shortly after that, the suspect parked and bailed out at Deltona Gardens Apartments and went into a wooded area to hide. Air One spotted him from overhead.’