Canberra will stay in lockdown until the national vaccination average hits 70 per cent – even if the ACT achieves the feat weeks earlier.

The Australian capital is set to start opening up gradually after its lockdown, which is slated to end on October 15 following a four-week extension.

Chief Minister Andrew Barr expects the ACT to be in a strong position to start reopening gradually as national vaccination thresholds of 70 per cent from mid-October and 80 per cent from early November are reached.

He argued to end lockdown before the national average caught up would be contrary to the national reopening plan, and would be risky because so many people moved in and out of Canberra. 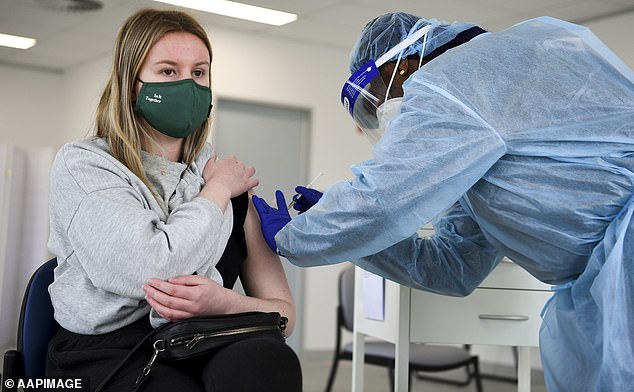 Canberra will stay in lockdown until the national vaccination average hits 70 per cent – even if the ACT achieves the feat weeks earlier (pictured, a woman getting a vaccination jab in Canberra recently) 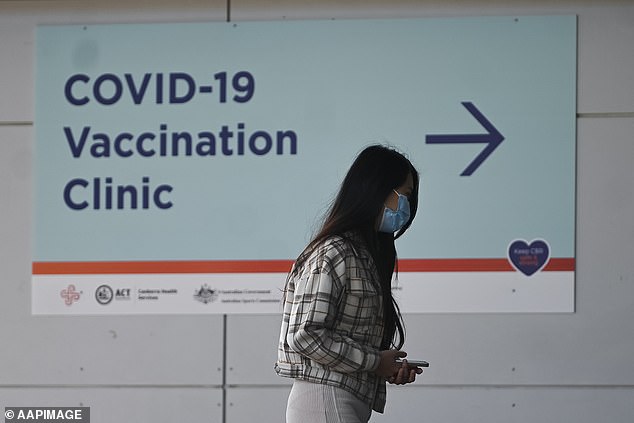 In Canberra, more than 50 per cent of residents aged 12 and older are currently double-dosed (pictured, a woman outside the Covid vaccination clinic at the Australian Institute of Sport)

‘We are an island jurisdiction within NSW without the capacity to have hard borders. So we also need the population that’s coming into the city to be vaccinated as well,’ Mr Barr told reporters on Wednesday.

‘We expect restrictions to gradually change as we transition through these vaccination phases in October and November, with the caveat that they may need to be adjusted to respond to increased risk of Covid-19 spread.’

In Canberra, more than 50 per cent of residents aged 12 and older are double-dosed.

As of Wednesday, 75 per cent were partially vaccinated.

Mr Barr stuck to his guns as he sparred with reporters who noted that Canberra was projected to hit 70 per cent fully vaccinated 20 days before the national average.

However, he acknowledged that in the very unlikely scenario that NSW and Victoria’s vaccination rates ‘fell in a hole’ and the gap became ‘untenable’, he would revisit the issue.

The chief minister said the ACT would soon have administered first doses to everyone who wants one.

‘Then the balance of the vaccination program will shift to second doses and it will significantly pick up pace,’ he said.

The ACT recorded 13 new infections – eight of them household contacts and five of the total in quarantine the whole time – a day after extending its lockdown for a third time.

The situation will be reviewed in two weeks, with small freedoms added in the meantime and the expected return of year 12s to classrooms for start of term four.

Canberra’s lockdown had previously been scheduled to run until 11.59pm this Friday.

But authorities hit the brakes because of continued unlinked cases and people infectious in the community.

Mr Barr floated greater caps on the number of people allowed to gather outdoors and the gradual reintroduction of home visits from later in October should things go well. 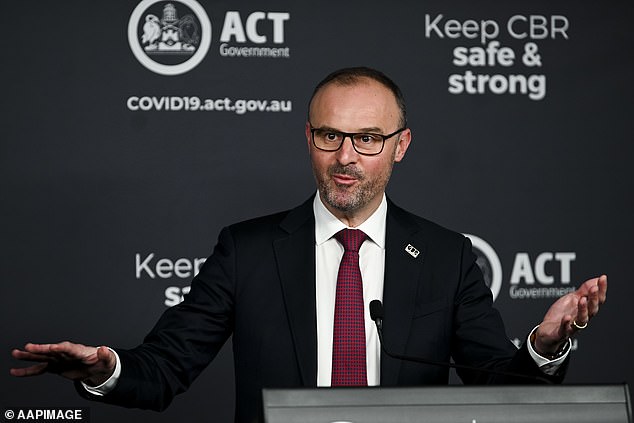 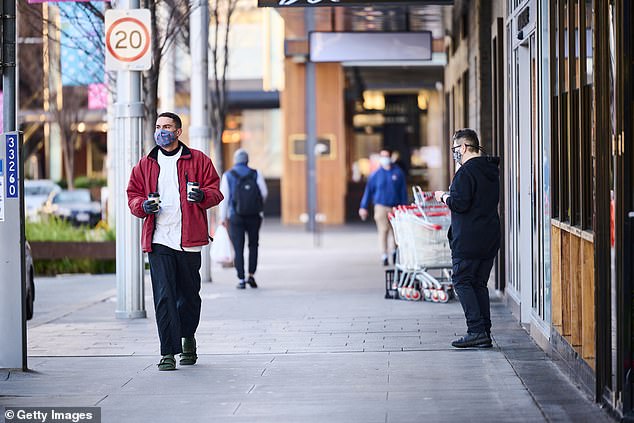 Lockdown was extended in the ACT until October 15 on Tuesday after 22 new cases (pictured, residents in the Canberra Centre in the CBD)

‘Right now though we need to give more than 100,000 Canberrans the opportunity to get vaccinated in the next four weeks as we suppress our current outbreak,’ Barr said.

‘Our objective through all of this is to keep our community safe and to work towards a safe and happy Christmas and summer holiday period for everyone.’