Barcelona’s new normal was laid bare last night after their chastening Champions League defeat at the hands of Bayern Munich.

Forced into a new era without Lionel Messi this season after his shock departure, the pressure is increasingly on boss Ronald Koeman and supporters are frustrated.

Their misery was even summed up by their failure to record a single shot on target for the first time ever in their history in the competition. 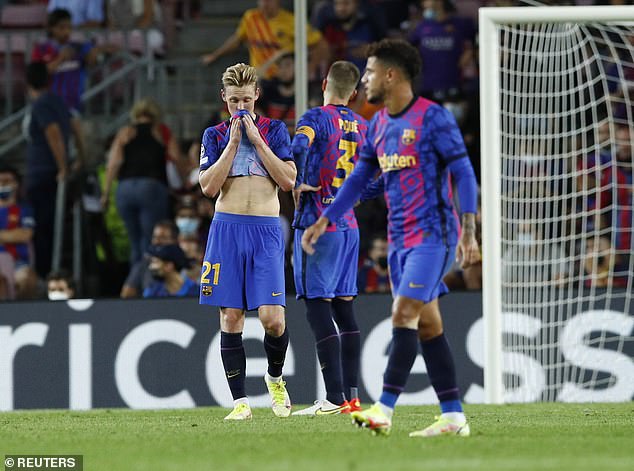 Thomas Muller’s strike and Robert Lewandowski’s brace handed the visitors a comfortable victory at the Nou Camp, and they were rarely threatened.

The under-fire Koeman pointed out the threadbare nature of his squad at full-time, and partnered Memphis Depay with Luuk de Jong.

However, both forwards found themselves struggling to make an impact, with Depay, who has enjoyed a flying start this campaign, unable to replicate his magic. 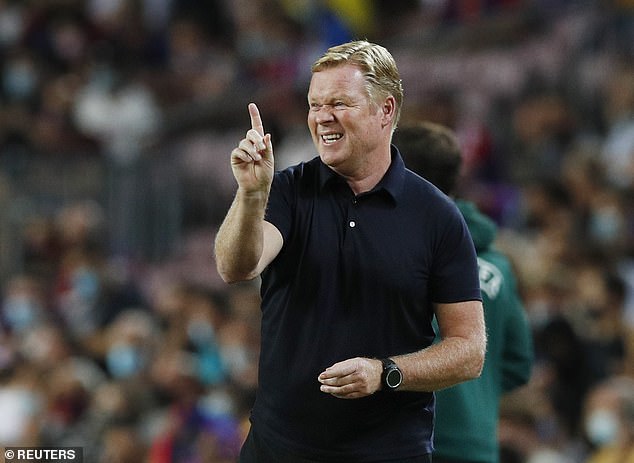 As a result, Koeman was left to rue his lack of current options, and was open in admitting that Bayern are now a ‘better team’.

‘Of course we would have liked to compete better but there is a difference in their quality as a team [and ours],’ Koeman said.

‘There was a big difference between the benches too. We have lots of players with a big future but right now we need players back from injury.’

He then added: ‘We started well but we had problems getting forward. We were unlucky with the first goal and from their second goal it was very difficult. 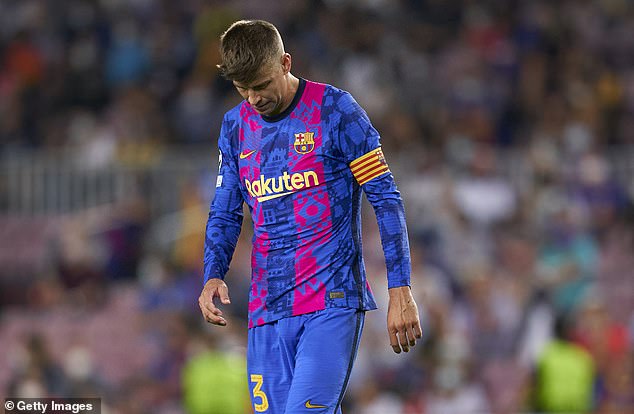 ‘Right now they are a better team than us.

‘This is where we are right now. Jordi Alba was ill last night and still played. This was Luuk De Jong’s first game.

‘Alba was very tired and we didn’t want to risk him playing the whole game.’

Gerard Pique delivered a similarly bleak assessment of Barcelona’s stature, conceding that ‘we are what we are’ – but chose to focus on the rare positives. 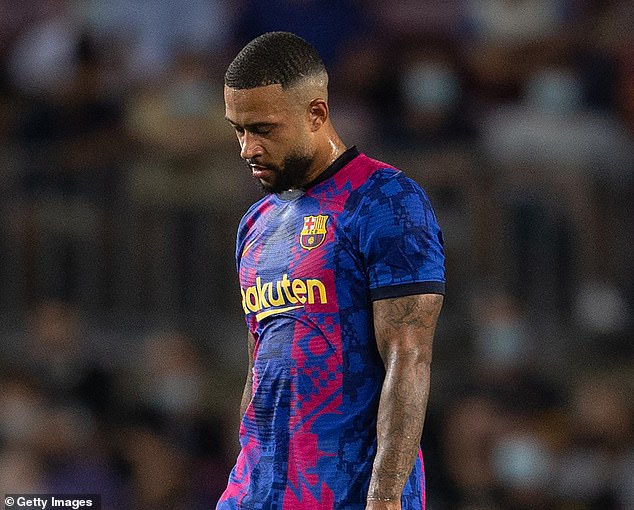 ‘Playing at home, it is a bad result, we are not going to fool ourselves,’ he said.

‘But if you look at the game, I think that in the first half we have competed, they have gone ahead with a deflected goal.

‘In the end I don’t know how many 18-year-olds we had on and the team has competed and has shown their face.

‘Now we are who we are, we are what we are, but I am convinced that as we recover players, we will end up competing. 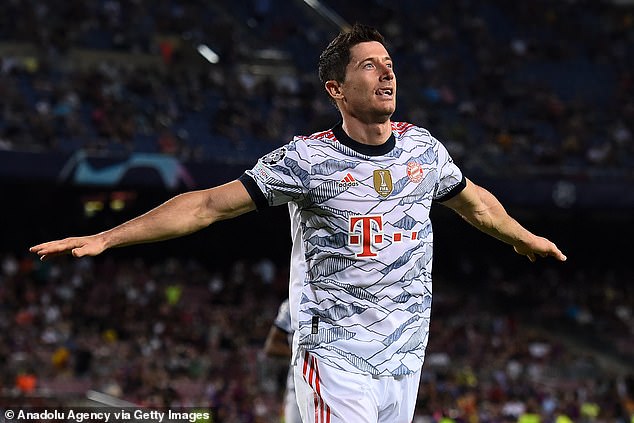 ‘Now we are not favourites, but football changes very fast. Last season nobody saw Chelsea as favourites.’

The press in Spain appear to disagree, however, having labelled Barcelona as ‘poor’ and ‘weak’ in the wake of their below-par display.

Marca’s front page shows a picture of Lewandowski and Muller, the two goalscorers, sharing a high-five – and their headline reads ‘Poor Barcelona’. 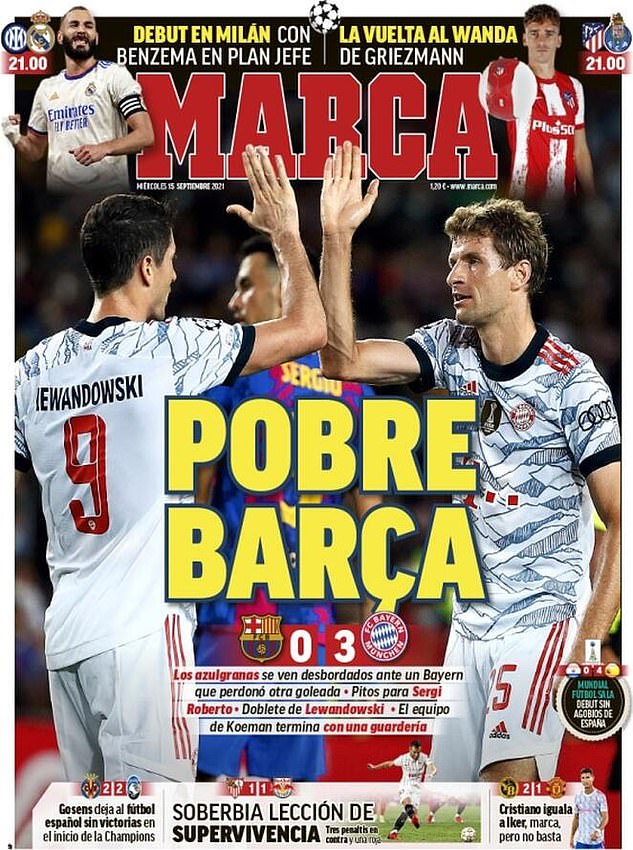 AS also opted for a shot of the in-form Lewandowski, although this time the striker can be seen seemingly consoling Pique. The headline is ‘Another bath’.

This references yet another poor result for Barcelona against Bayern, who were hailed as being ‘again a step above’ their opponents.

Mundo Deportivo, meanwhile, show a snap of Marc-Andre ter Stegen conceding one of the three goals, which is accompanied by Pique’s words, ‘This is what there is’. 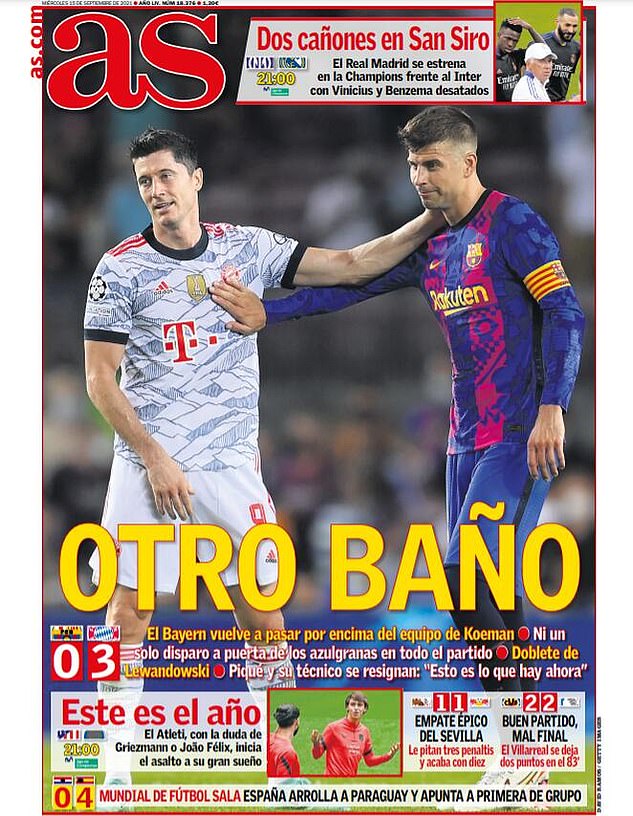 AS say ‘another bath’, in reference to yet another damaging result for Barcelona against Bayern 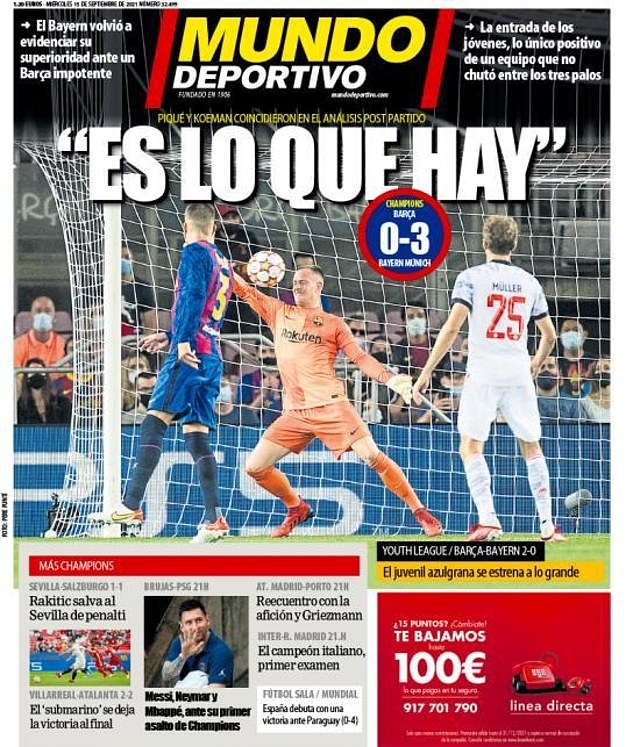 The hosts were savaged for being ‘impotent’, while Bayern showed their ‘superiority’ in the win that has sent them top of the group.

Barcelona have now been made to suffer three consecutive defeats at home in European competition for the first time in their history, in yet another wanted first.

A banner reading ‘Koeman Out’ was displayed before kick-off, a clear sign of the growing discontent among the fanbase, but it was removed by club staff.