Water firms yesterday unveiled plans to build vast reservoirs and use canals to transfer supplies in response to climate change.

Many are also planning to step up the recycling of sewage water so it can be pumped back into the network to keep taps running in times of drought.

The situation is so serious that a scheme for a desalination plant to treat sea water on the south coast is also being considered – the sort of measure used by desert states.

The moves comes against the background of climate change, which is predicted to created hotter, drier summers with associated droughts and wetter winters.

Figures out this week suggest the number of countries seeing temperatures above a scorching 50C (122F) is rising and the number of days when this figure is breached has almost doubled since 1980. 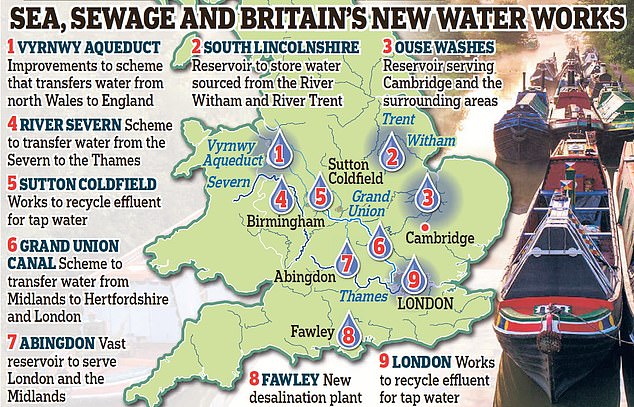 The industry regulator, Ofwat, has set aside £500million to allow water companies explore a series of schemes to help maintain supplies in future decades.

These are focused on capturing and storing more water during the winter and then creating grids, using canals and pipelines, to transfer supplies to areas at risk of drought.

Schemes include a vast reservoir in Oxfordshire, south of Abingdon, which would serve the capital and Midlands.

The size has not been decided, however one of the original plans suggested it would cover the equivalent of 2,500 football pitches, making for the biggest stretch of open water in southern England.

Four in ten young people fear having children in the future because of climate change.

A global survey of 10,000 people aged 16 to 25 found more than three quarters (77 per cent) thought the future was frightening. And nearly six in ten said they were ‘very’ or ‘extremely’ worried about climate change.

More than half said they had felt afraid, sad, anxious, powerless, helpless and/or guilty, and 45 per cent said their concerns negatively affected their daily life.

Less than a third think governments are doing enough to avoid catastrophe and – in the UK alone – 38 per cent are fearful of having children.

The University of Bath’s Dr Liz Marks, a co-leader of the study, described the findings as ‘shocking’.

‘Now is the time to face the truth, listen to young people, and take urgent action against climate change,’ she added.

The study is under peer review for publication in the Lancet Planetary Health.

It would be about half the size of Windermere and sit behind huge embankments, taller than electricity pylons.

East Anglia would get a Fenland reservoir, created either to the east or west of the Ouse Washes, serving Cambridge and the surrounding areas.

There would be another new reservoir in South Lincolnshire, which would store water sourced from the Witham and Trent rivers.

Other major schemes include transferring water from the Severn to the Thames via the Grand Union Canal or a pipeline.

The canal would also be used to transfer water from treatment works in the Midlands to customers in Hertfordshire and London.

There are plans to improve the Vyrnwy Aqueduct, which takes a water supply from Lake Vyrnwy in north Wales, into England.

Thames Water is looking at schemes to treat and reuse effluent gathered from sewage works.

The effluent would go through a recycling plant and then be flushed into the Thames before later being abstracted from the river to be treated again and pumped into the drinking water system.

Southern Water is investigating the construction of a desalination plant on the shores of Southampton Water, which Ofwat is considering backing despite concerns from environment campaigners.

The regulator said: ‘Changes to weather patterns because of climate change mean rainfall distribution is becoming less predictable and consistent.

The programme is being overseen by RAPID – the Regulators Alliance for Progressing Infrastructure Development.