Biden mandate cause price-gouging: Price of fake vaccine cards doubles to $200 after the president announces mandatory shots for some workers

The price of fake vaccination cards has risen 100% since President Biden’s announcement of a sweeping new vaccine mandate.

In the days before the president’s announcement that all businesses with over 100 employees must require vaccinations or weekly testing, the cost of a fraudulent card ran about $100. The day after the announcement, the average cost spiked to $200.

The number of sellers cashing in on the anti-vax market also spiked, from around 1,000 to more than 10,000, according to info from Israeli security firm Check Point shared with the Daily Beast.

Biden last Thursday also strengthened a vaccine mandate for federal workers and contractors, requiring them to be vaccinated and eliminating the weekly testing alternative.

The number of subscribers in Telegram groups for fake vaccine cards increased five-fold, according to researchers at Check Point who monitor the darknet and deep web.

In April, a bipartisan coalition of 47 state attorneys general sent a letter to the CEOs of Twitter, Shopify and eBay to take down ads or links selling the bogus cards.

Many of the sites have blacklisted keywords related to fake cards, but places to buy the documents are still popping up on messaging apps, chat forums and the dark web.

In July, the Department of Justice announced its first prosecution for fake vaccination proof, where a California naturopathic doctor, Juli Mazi, was charged with one count of wire fraud and one count of false statements related to health care matters. 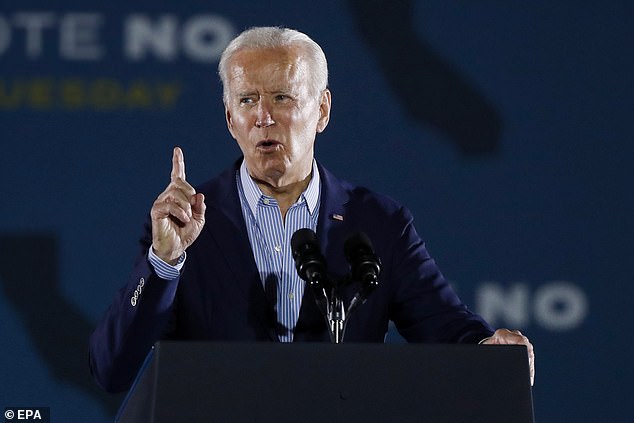 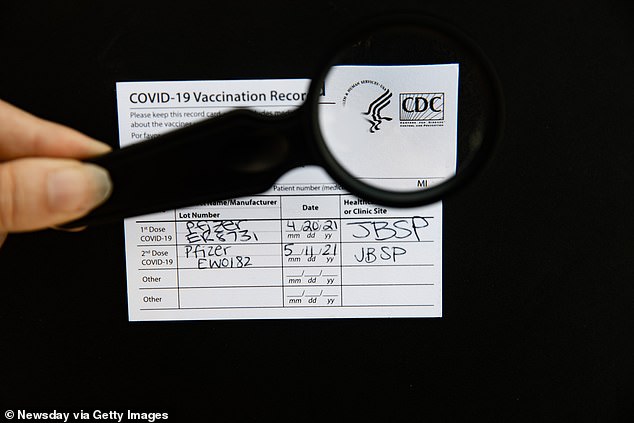 A photo of a hand using a magnifying glass to check the authenticity of s Covid-19 vaccine card, taken on August 15 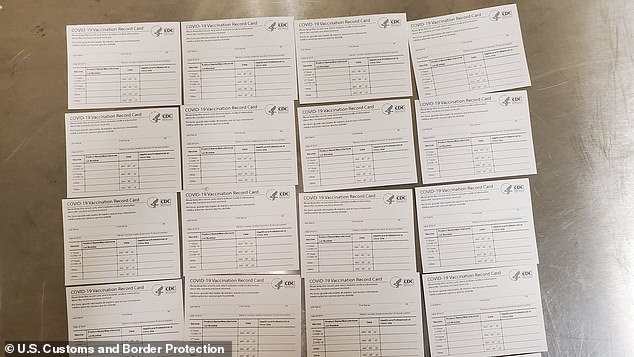 Thousands of counterfeit vaccination cards, containing typos and misspelled words, have been seized in Memphis

And on Aug. 17, a Chicago pharmacist, TangTang Zao, was arrested for selling dozens of fake vaccine cards for just $10 a pop.

‘To put such a small price on the safety of our nation is not only an insult to those who are doing their part in the fight to stop COVID-19, but a federal crime with serious consequences,’ said Special Agent in Charge Emmerson Buie Jr. of the FBI’s Chicago Field Office.

Zao sold blank but authentic CDC vaccination cards and was charged with 12 counts of theft of government property. If convicted, he faces a sentence of 10 years in prison per count.

On Aug. 31, a New Jersey woman, Jasmine Clifford, who went by @antivaxmomma on Instagram, was charged along with 14 others as part of a scheme that peddled over 250 fake vaccination cards for $200 on Instagram. For an extra $250, co-conspirator Nadayza Barkley, who worked at a New York medical clinic, would enter the buyer’s name into the state’s digital database for New York’s digital vaccine pass.

Three Vermont state troopers, who have since resigned, are also under FBI investigation for running a fake vaccination card scheme.

Customs and Border Protection says it has seized thousands of fake vaccination cards coming into the US over the past few months.

Last month the agency uncovered a shipment from Shenzen, China to Memphis containing fake vaccine cards fraught with typos and misspelled words. CBP said it was the 15th such shipment of the night, though to all different cities, and none were even concealed inside their shipment container. CBP said Memphis alone had made 121 seizures totaling 3,017 of vaccination cards.