Virginia’s former Democratic Governor Terry McAuliffe was caught maskless violating both private and federal COVID health rules during an Amtrak journey from New York to Washington, D.C., according to photos that surfaced on Tuesday.

McAuliffe ran Virginia from 2014 to 2018 and is currently campaigning for a second term in the state’s upcoming November election.

But the pro-mask mandate Democrat was accused of an ‘absolute double standard’ by an anonymous Amtrak passenger who handed the photos over to Fox.

He’s seen walking through the train terminal while mid-conversation on his phone.

No sign of a face covering can be seen, despite the Centers for Disease Control and Prevention’s (CDC) January directive that requires everyone going through airports, train stations and other transit hubs to wear one at all times.

The CDC also recommends wearing masks regardless of vaccination status if you live in a COVID hotspot.

McAuliffe expressed strong support for sitting Governor Ralph Northam, also a Democrat, when he mandated masks for students and staff in school regardless of vaccination status. 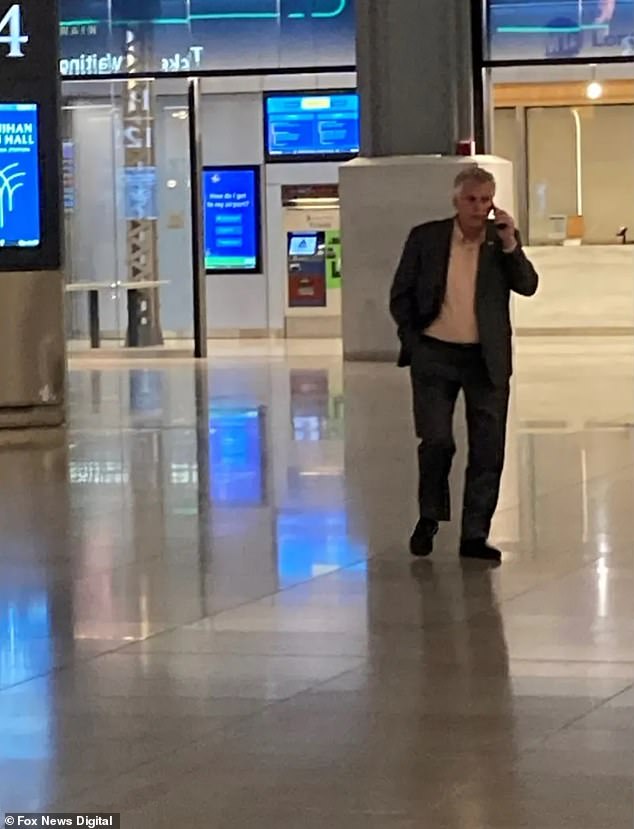 In this photo obtained by Fox, McAuliffe appears to be speaking on the phone inside New York’s Penn Station without a mask. The CDC ordered all travelers to wear masks in transit hubs beginning in January

‘Terry believes we have to do everything we can to keep our children safe while they return to schools in-person this fall, and he believes everyone should follow CDC guidelines in wearing masks and getting vaccinated,’ a spokesperson for his campaign said at the time regarding Northam’s order.

The CDC guideline on face masks would apply to ’98 percent of [Virginia] counties regardless of individuals’ vaccination status,’ according to the New York Times coronavirus tracker.

The passenger who shared the photos with Fox told the outlet they didn’t recognize McAuliffe at first but that he looked ‘familiar.’

They said they snapped the picture while waiting in line to board the train.

The gubernatorial candidate was reportedly ‘not wearing a mask on the escalator down to the platform’ while he continued his call.

A second photo shows McAuliffe walking down an aisle of seats while on the phone. He was still maskless.

Behind a hunched McAuliffe Amtrak’s mask guidance can be seen, which is generally displayed in each train car for all passengers to take note. 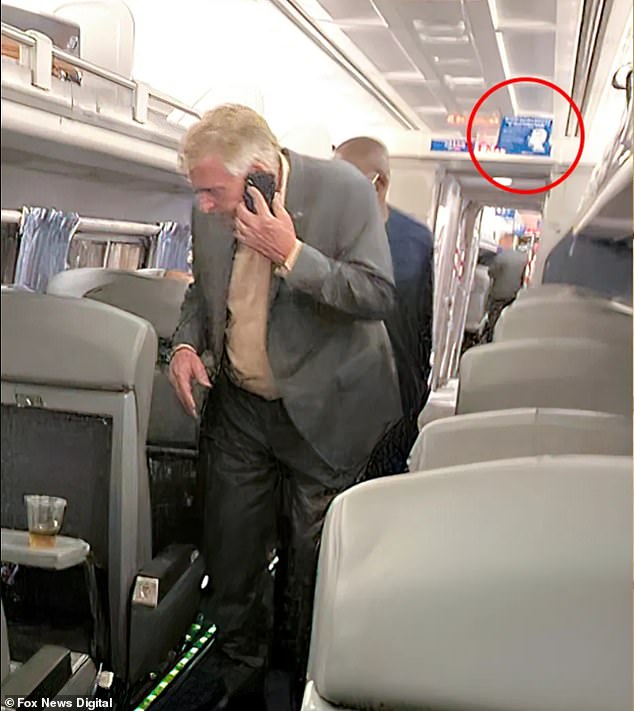 Another photo shows McAuliffe hunched over in the train aisles, still maskless, in front of a sign asking customers to wear masks 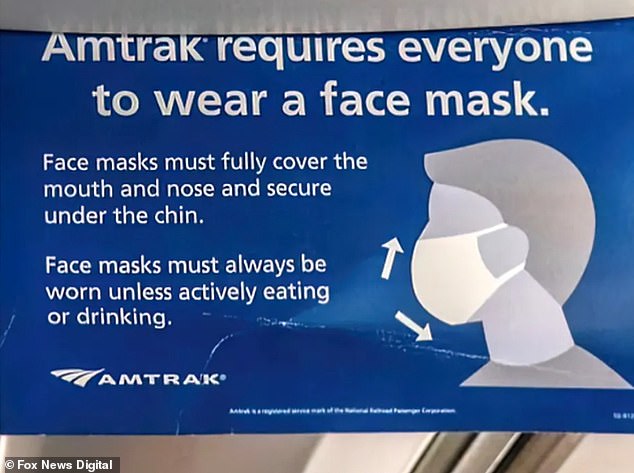 The sign is hung in most Amtrak train cars

‘Amtrak requires everyone to wear a face mask,’ the sign reads. ‘Face masks must fully cover the mouth and nose and secure under the chin. Face masks must always be worn unless actively eating or drinking.’

The train company’s website notes that wearing a mask at all times when on the train and in the station is required by ‘federal law.’

‘We happened to be in the same train car, and I took the second photo. We took our seats, and I didn’t get up for the rest of the trip, so I can’t speak to what he did or did not do during the trip as far as wearing a mask,’ the passenger said.

They noted that the few passengers sharing the train car as well were all in masks.

They added that McAuliffe ‘highlighted himself’ by being the only person around without a mask on.

‘You have an individual who wants to be a leader of a state here in the United States, and it is an absolute double standard. You have to lead by example,’ they said. ‘There is no accountability with politicians these days and it frustrates people.’ 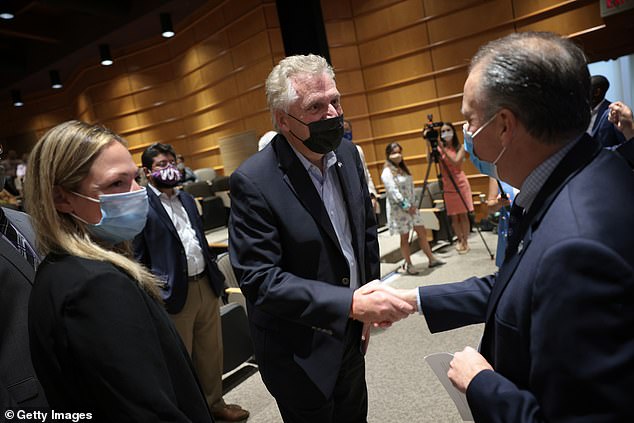 McAuliffe has been a staunch supporter of following CDC guidelines, particularly since he launched his campaign for re-election

When the train arrived at Washington, DC’s Union Station McAuliffe wasn’t wearing a mask, according to the passenger, though it was unclear if he put one on after or in-between the photos.

‘I remember thinking I should say something to him, but didn’t want to start some incident or viral issue,’ they said.

One of the main issues separating McAuliffe from his Republican gubernatorial challenger Glenn Youngkin is the Democrat’s embrace of COVID health restrictions.

McAuliffe’s Twitter feed is full of statements urging Americans to get vaccinated against COVID. It also shows him wearing a mask at indoor events when not speaking.

His opponent, Youngkin, has been seen disregarding face covering rules as early as January – but he’s always been a staunch opponent of COVID mandates.

Youngkin called Northam’s mask mandate ‘the first step towards returning to a full shutdown of our economy.’

When DailyMail.com reached McAuliffe’s campaign for comment, spokesperson Renzo Olivari responded with a statement criticizing Youngkin for failing to follow CDC guidelines himself.

‘Glenn Youngkin has shown Virginians he will be a failure when it comes to controlling this pandemic and rebuilding Virginia’s economy. Glenn has an extensive history of not following CDC mask guidelines dating back to the worst periods of the COVID-19 pandemic, and he peddles such dangerous anti-vaxx and anti-mask rhetoric that doctors in Virginia have begged him to stop undermining measures that will prevent the spread of this virus. 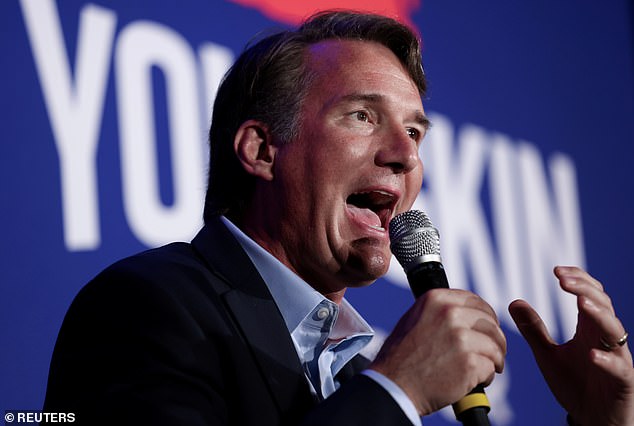 A statement sent to DailyMail.com by McAuliffe’s team makes no mention of the photos but lambasts his opponent Glenn Youngkin’s record on COVID and the economy

‘Terry is the only candidate in this race who has a plan to get Virginians vaccinated, keep our kids in schools, and create a better future for all Virginians,’ Olivari said.

The candidates are set to take the debate stage on Thursday.

Like many states around the country, Virginia is grappling with a summer coronavirus surge fueled by the highly contagious Delta variant.

In the last two week the Times tracker shows an 11 percent increase in the state’s COVID cases. Deaths rose by 19 percent and hospitalizations have surged by a whopping 26 percent.

Virginia has seen more than 811,000 COVID cases and just over 12,000 Virginians have died of the illness.

Across the US as a whole, more than 41 million cases have been reported since the start of the pandemic. More than 660,000 people have died.

But hopeful signs have shown the summer surge is slowing down. Still, about 1,500 people are still dying per day – the most since the winter peak.