‘Communist’ staff at an arms fair in London staged a surprise protest by setting off flares in front of visitors – after telling bosses they were happy to work the event.

The men were working at the Defence and Security Equipment International arms fair at the ExCeL in east London when they set off the flares.

In footage posted by the Young Communist League, the protesters stood on a carpet outside a stall for security firm Lockheed Martin while dressed in high-viz jackets. They then lifted their arms in the air and set off their smoke grenades as men dressed in suits shuffled past.

A man who appeared to be a security guard talks to the men as one of them shouts against ‘British imperialism’.

In a statement posted online, the group said it usually boycotts the event but decided to ‘protest and disrupt’ the fair this year.

It calls on supporters to ‘fight back’ and fight against the security industry across the world.

Another video posted online shows a group of ‘communists’ travelling to the event to protest. A photo of members of the Young Communist League showed them brandishing flares while holding a sign that read: ‘Arms dealers? War criminals!’

Dame Vivienne Westwood was among a group of protesters who demonstrated outside the event this afternoon. 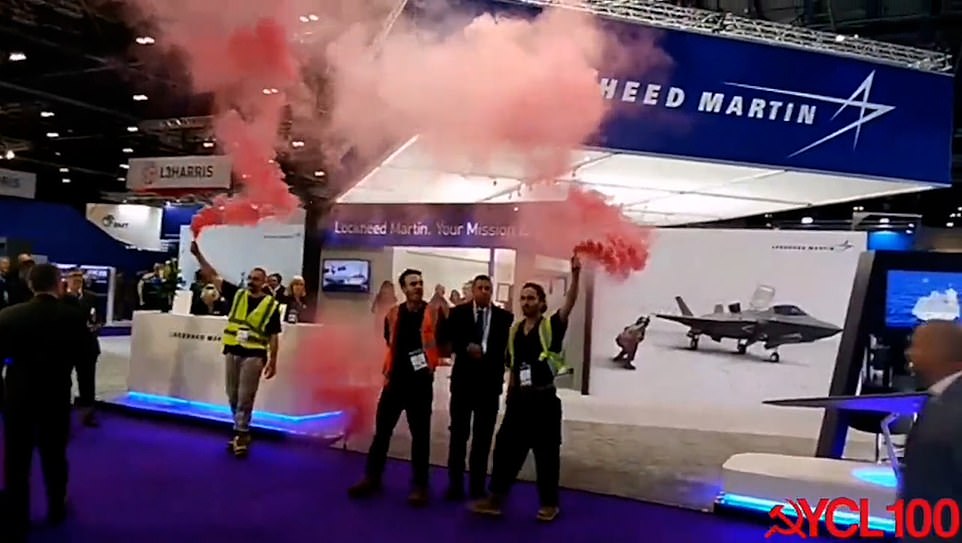 The Young Communist League group setting off smoke grenades during Arms Fair at London ExCeL. The protesters were workers at the event 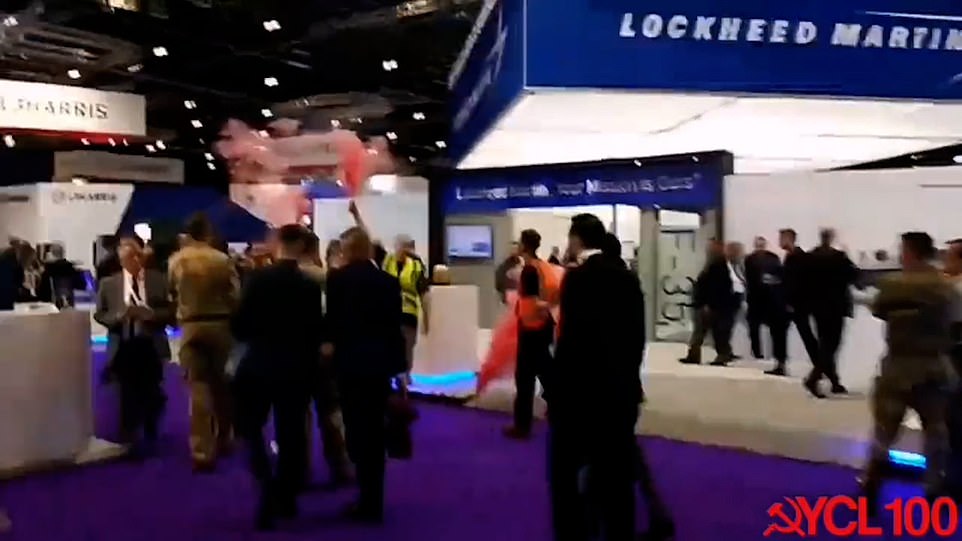 In footage posted by the Young Communist League, the protesters stood on a carpet outside a stall for security firm Lockheed Martin while dressed in high-viz jackets. They then lifted their arms in the air and set off their smoke grenades as men dressed in suits shuffled past 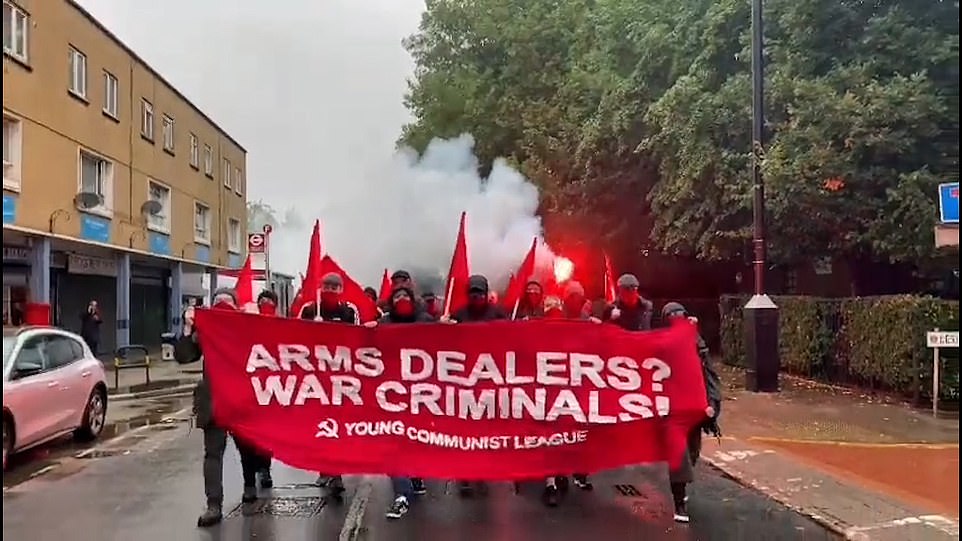 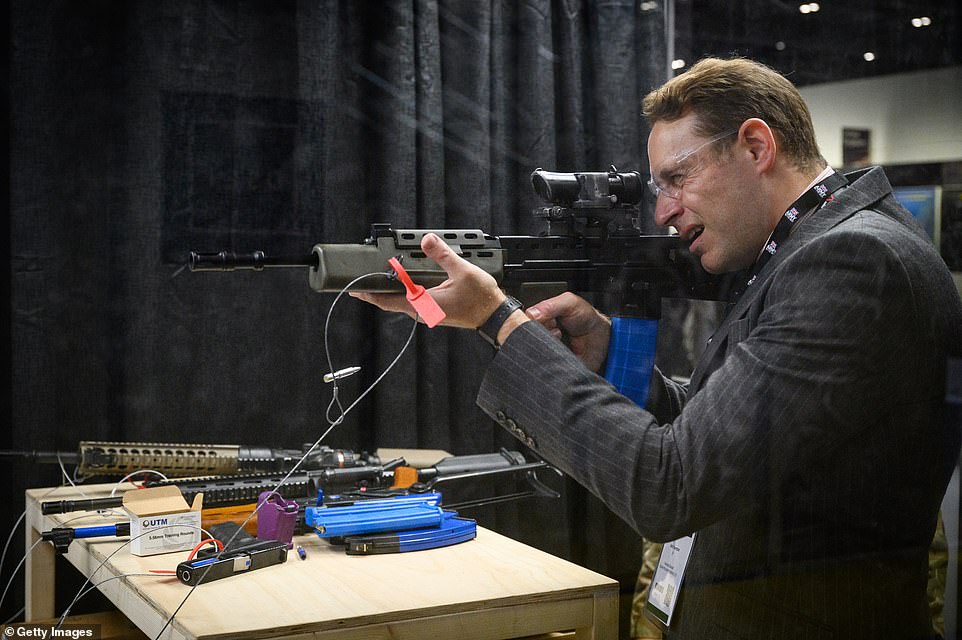 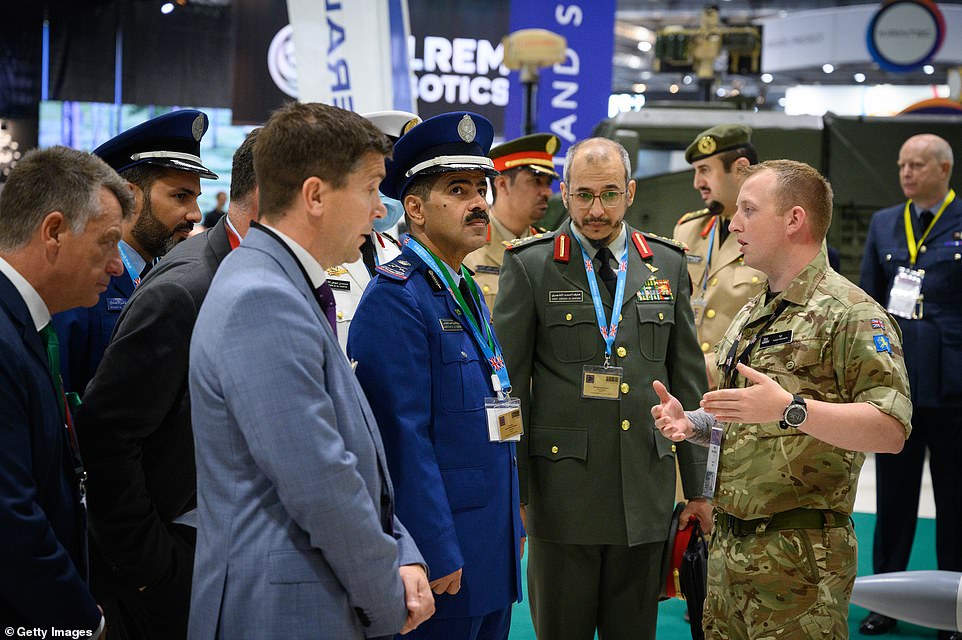 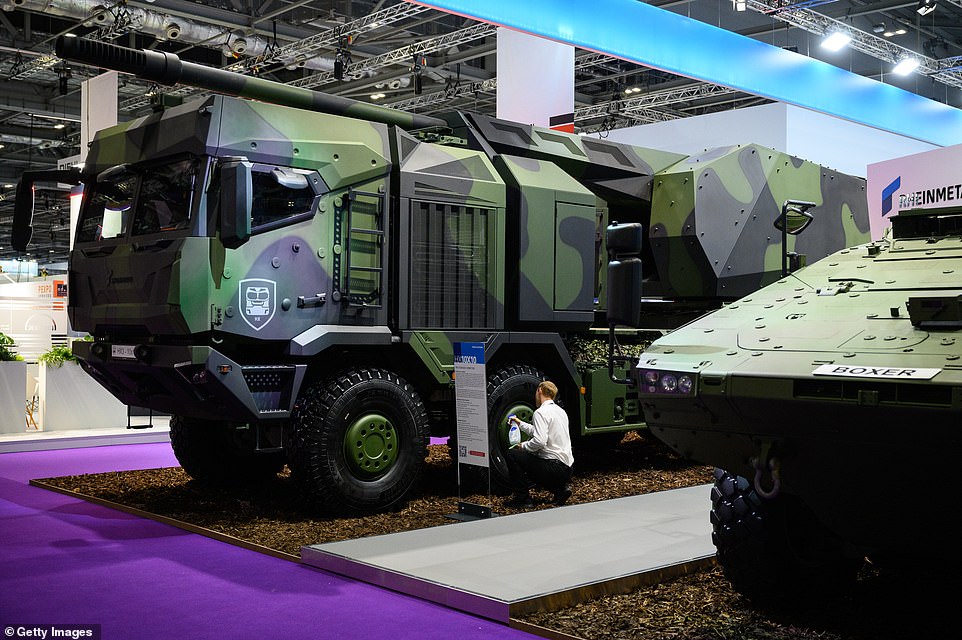 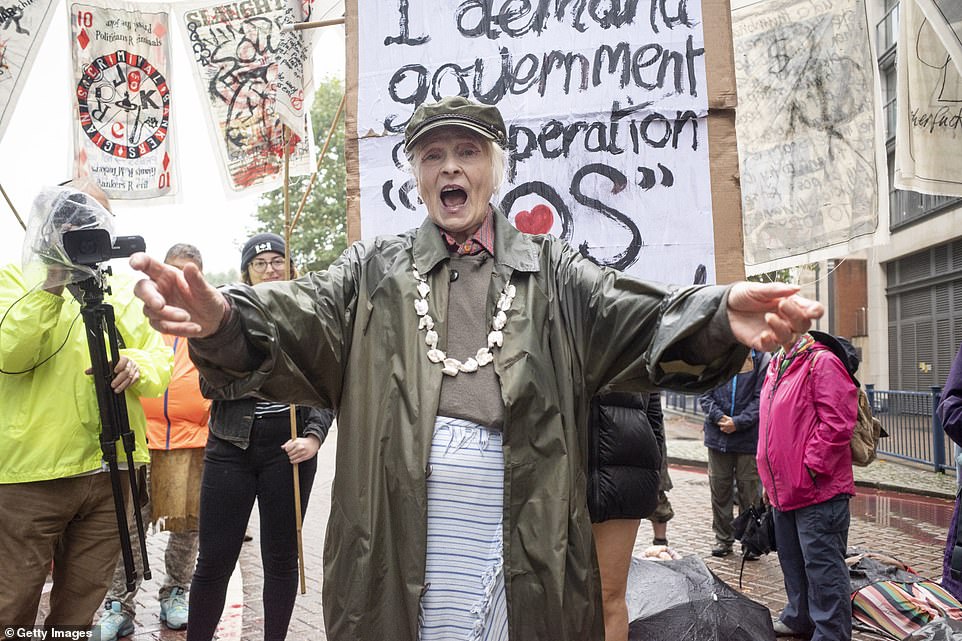 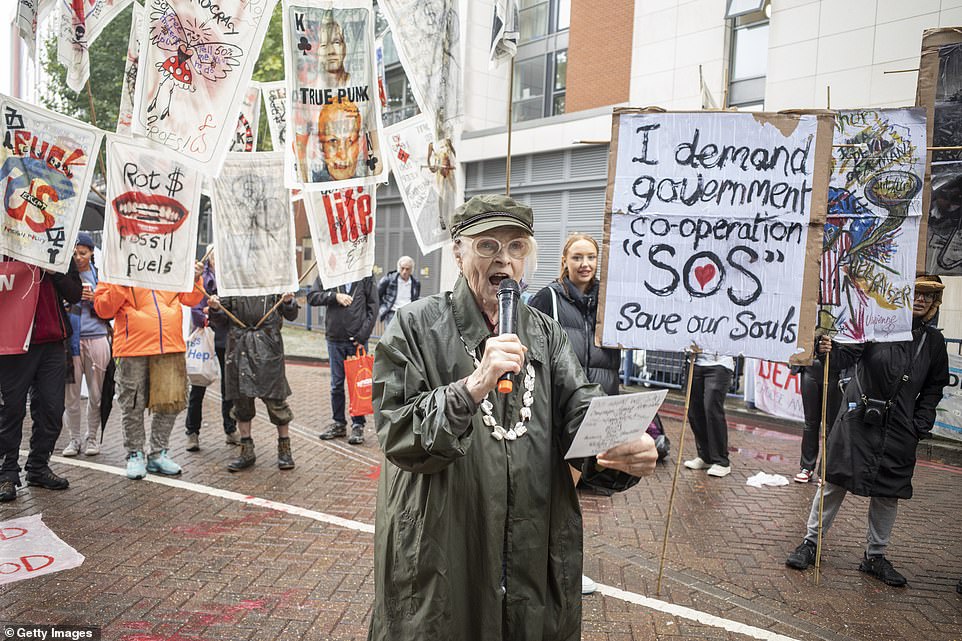 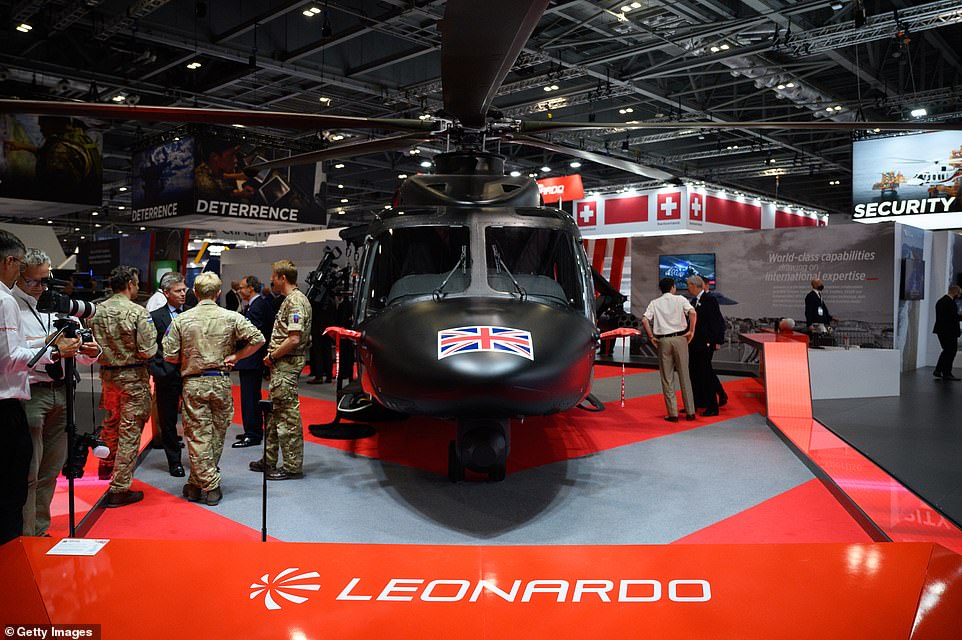 A Leonardo AW149 helicopter is seen on day one of the DSEI. Thousands of people and delegates are attending the event 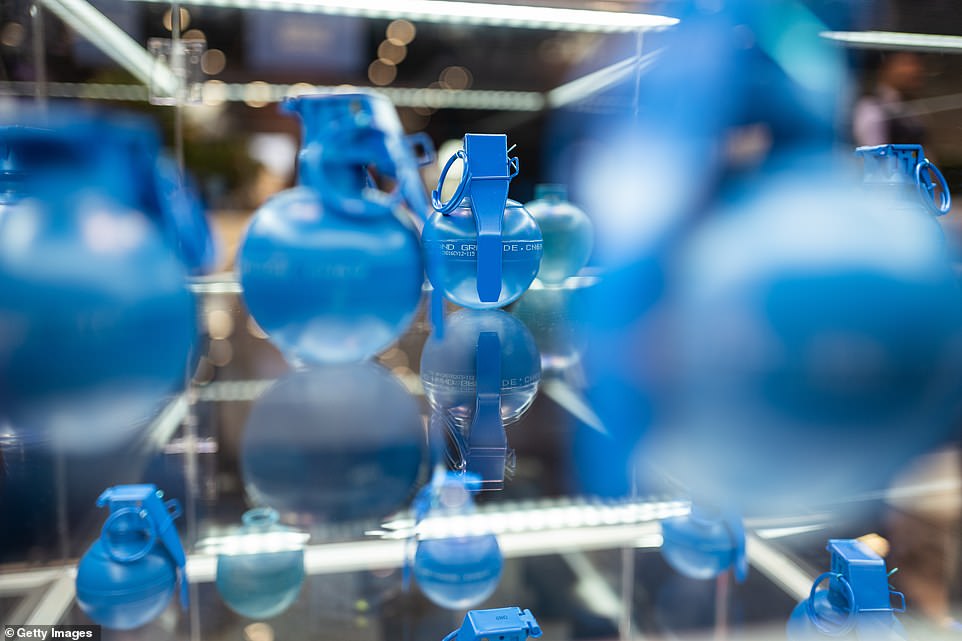 The DSEI arms fair sees thousands of guests visit, including delegates from all over the world invited by the Department for International Trade.

It sees exhibitors selling weapons from sniper rifles and tanks to combat aircraft and warships, presenting to more than 30,000 attendees.

The delegates mingle with more than 800 exhibitors, including 90% of the world’s top 10 arms manufacturers, during the four-day event which is held bi-annually.

This year, invitations for Saudi Arabia, Bahrain, Bangladesh, Colombia, Egypt, and Iraq drew criticism as they are all listed by the Foreign Office as ‘human rights priority countries’.

Those nations are among 61 that were invited to send delegates to the biggest arms fair in Britain.

Ahead of today’s event, ministers approved a Red Arrows flypast on Tuesday lunchtime. The HMS Argyll will also dock in the nearby harbour.

The fair is about 70% the size originally planned countries such as Turkey unable to participate because of Covid travel protocols. The total number of exhibitors is roughly half the 1700 that set up stands two years ago. 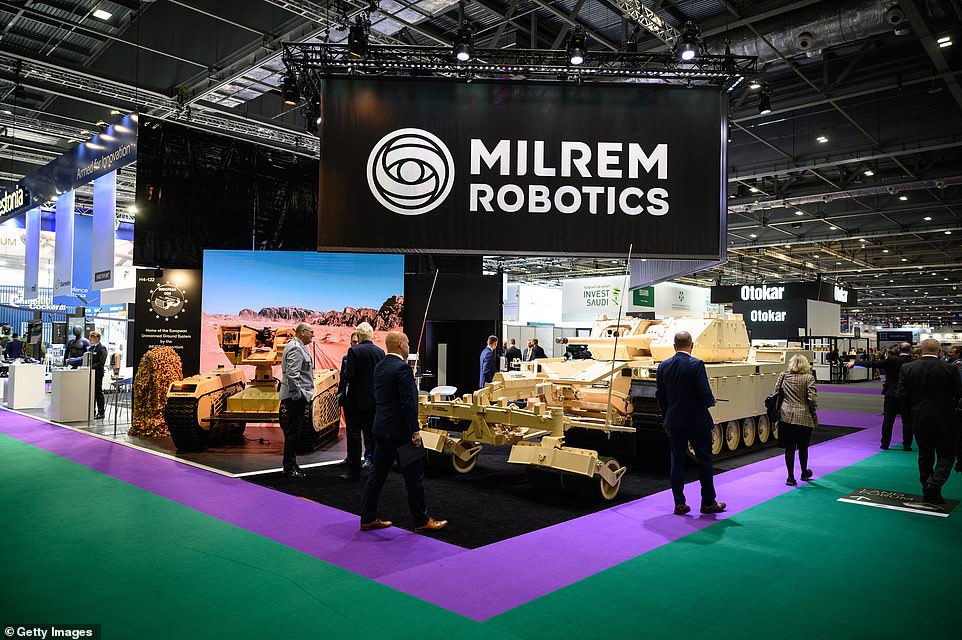 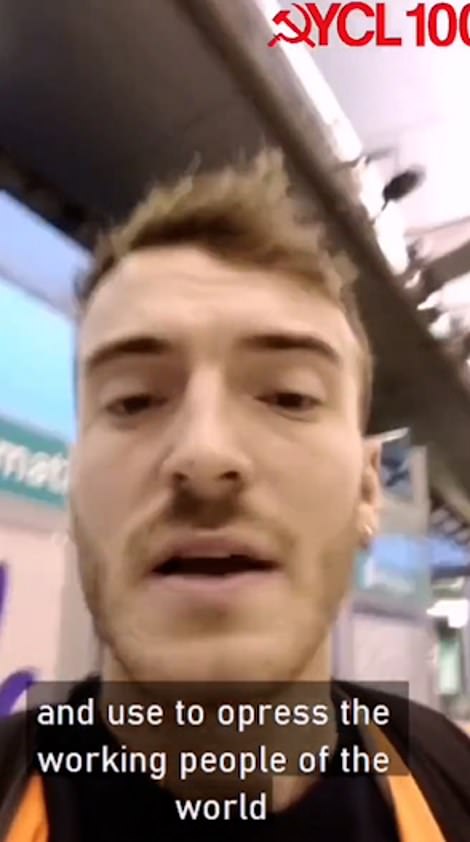 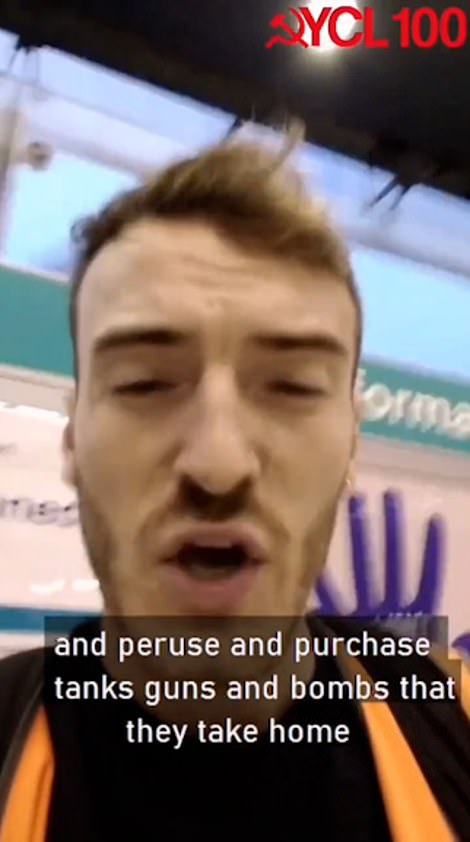 In a statement posted online, the group said it usually boycotts the event but decided to ‘protest and disrupt’ the fair this year. It calls on supporters to ‘fight back’ and fight against the security industry across the world 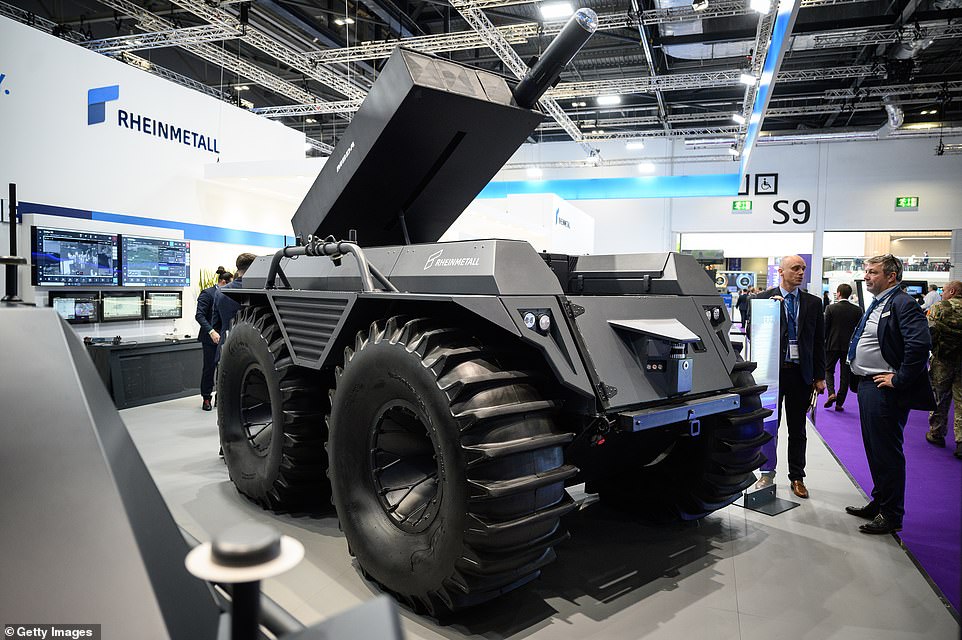 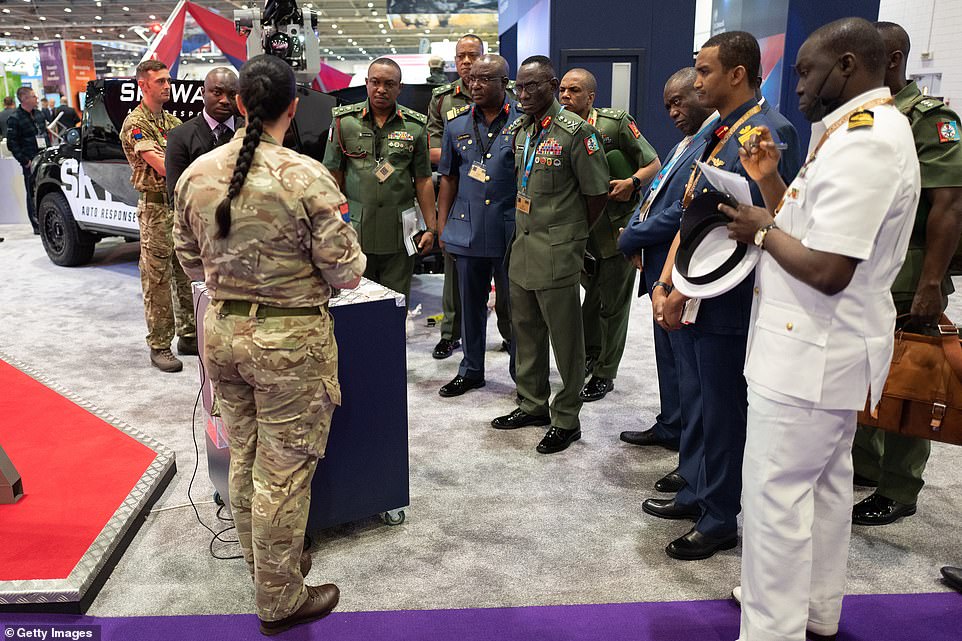 Members of the Nigerian military listen to a presentation on day one of the DSEI, held in London this afternoon 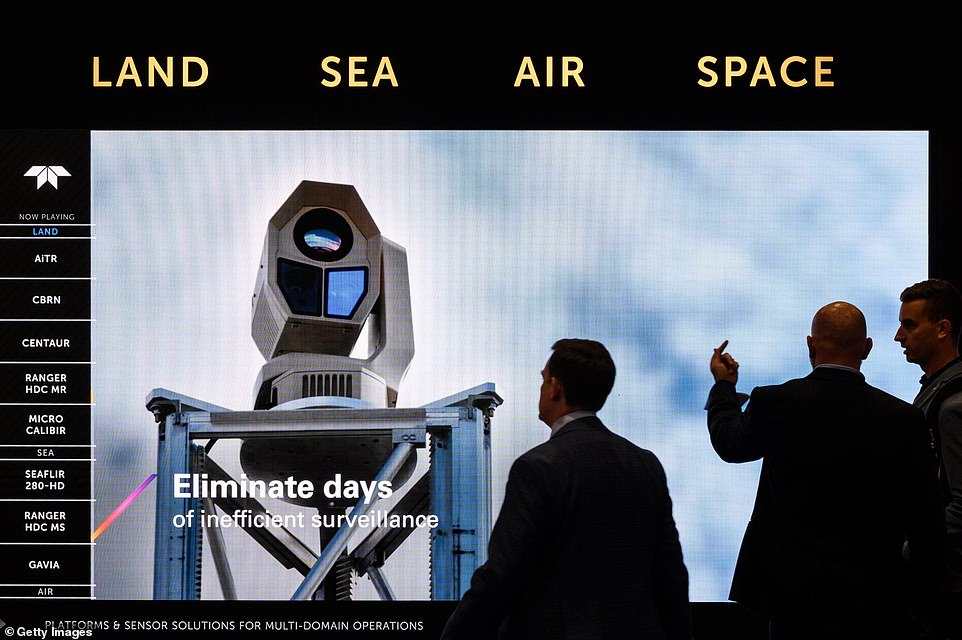 There will be a security zone at the event which is ‘a showcase of security equipment, technologies, strategies and systems to counter priority threats, such as cyber-attacks as well as border, infrastructure, crowd and crisis security’.

Last month, London Mayor Sadiq Khan wrote a letter to organisers of the event calling on them to cancel it and not come back to the city.

The mayor said the fair’s presence in London was insulting to people who had escaped violence and fled to the capital, and that it was costing too much to police.

He said in a letter to Grant Burgham, the event’s director: ‘I strongly urge you to reconsider this year’s event and any plans you have to host future events in the city.

‘For [London] to be used as a marketplace for those who wish to trade in weapons to some countries that contribute to human rights abuses goes completely against our values.’

In response, Mr Burgham said: ‘The event serves only the interests of the legitimate defence and security industry, which is the most highly and tightly regulated in the world. 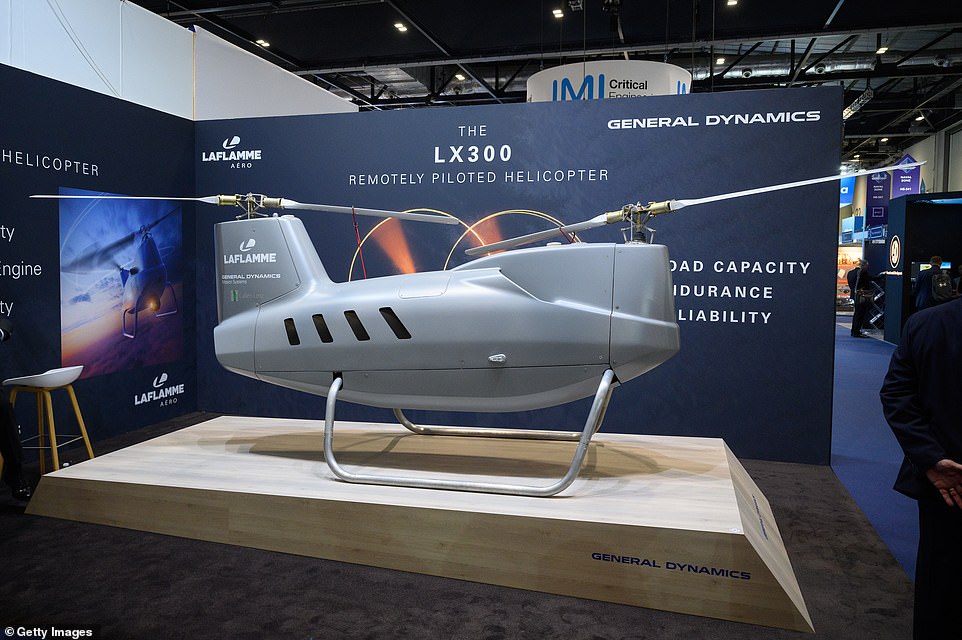 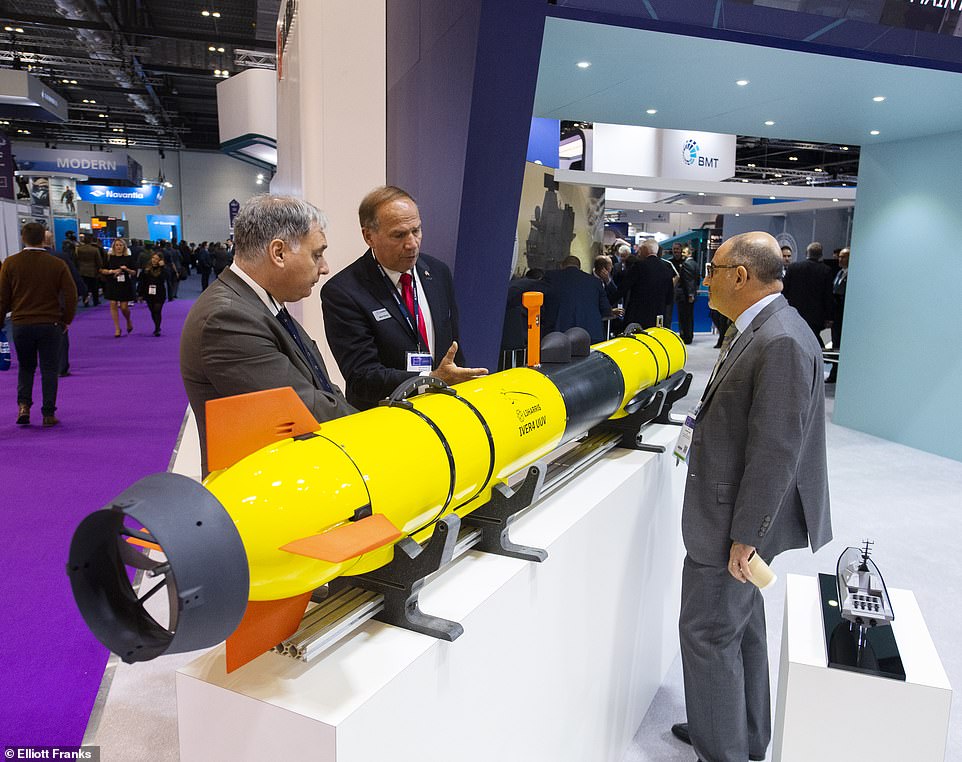 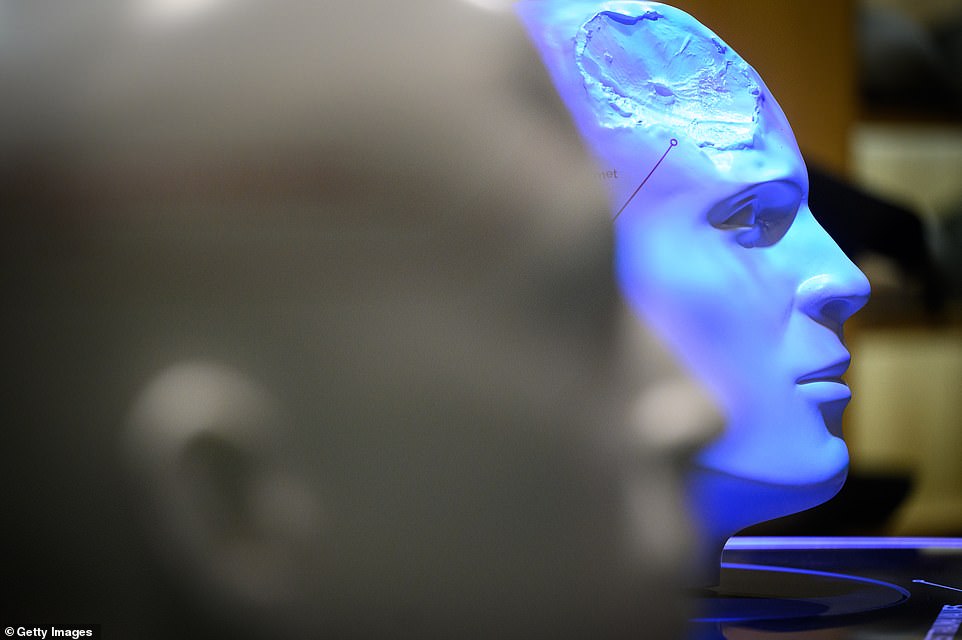 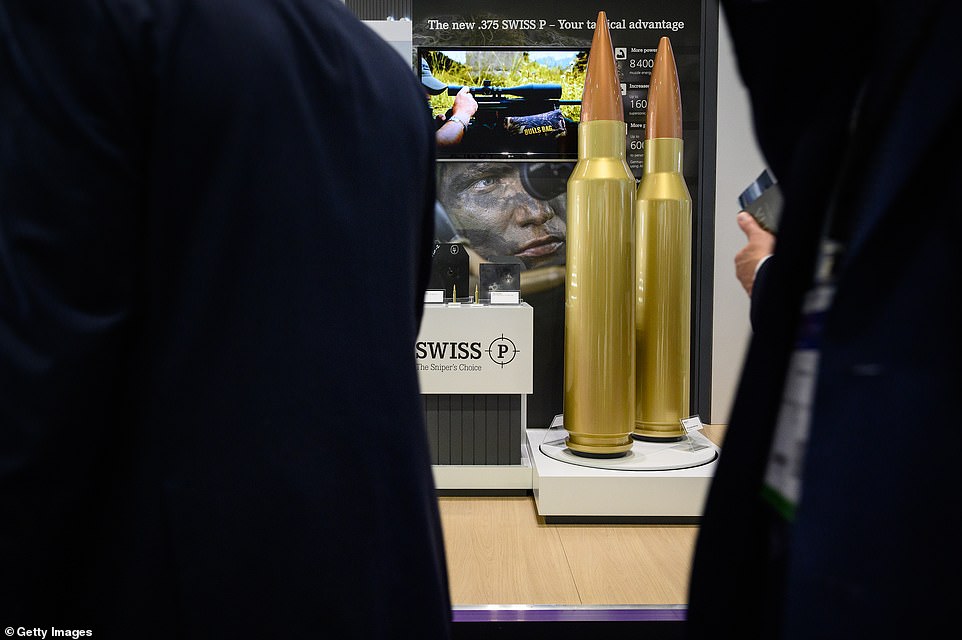 Delegates walk past large scale display models of the .375 Swiss P sniper ammunition from Ammotec on day one of the DSEI 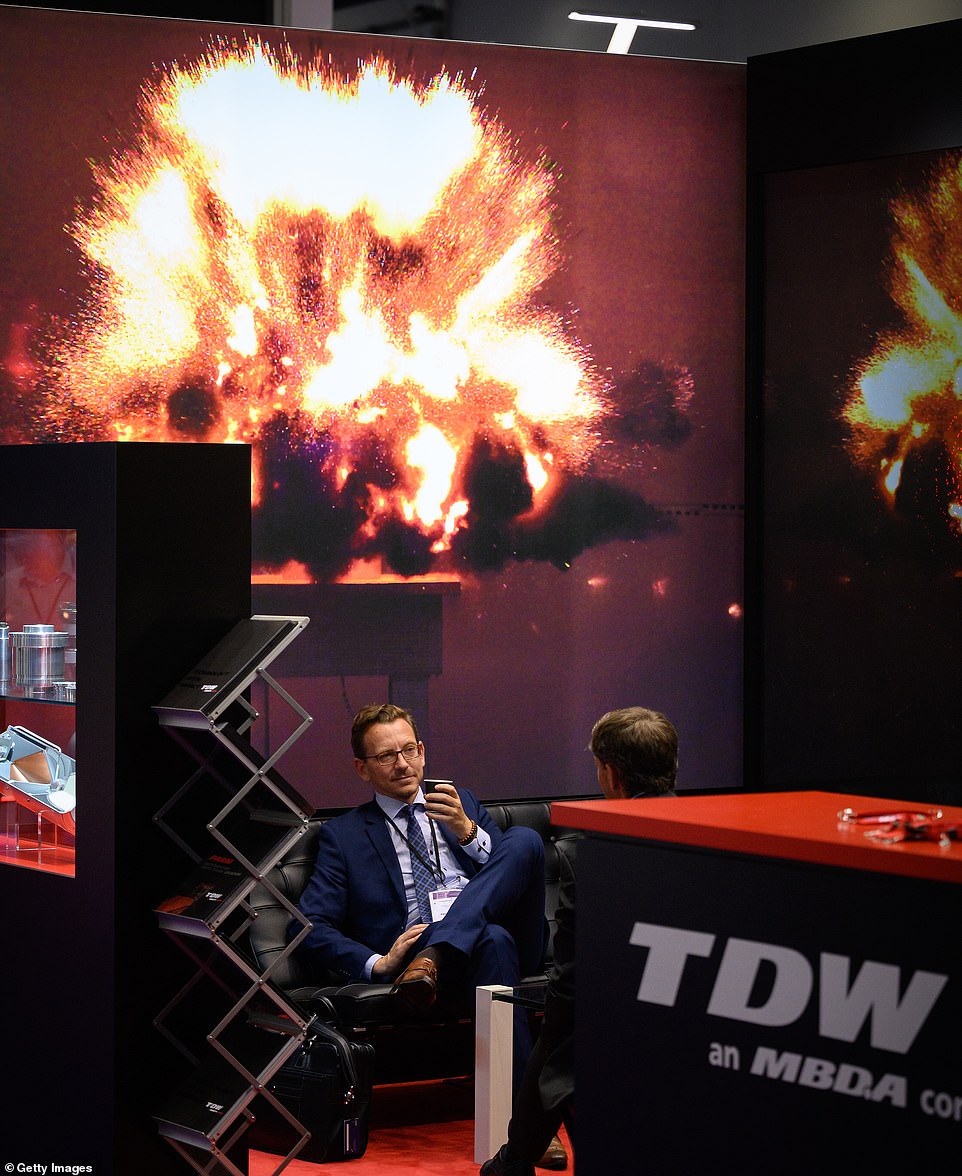 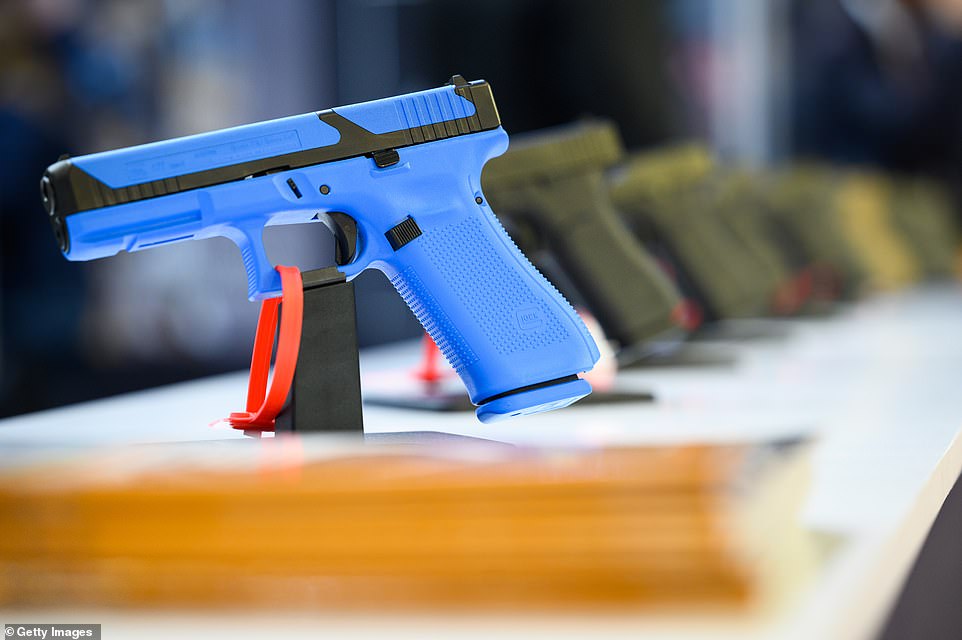 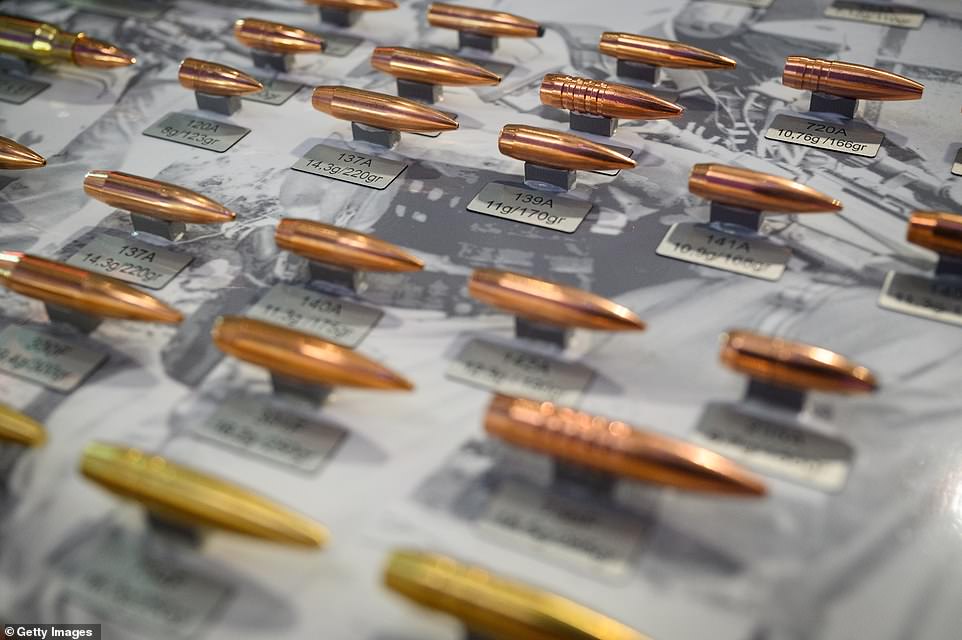 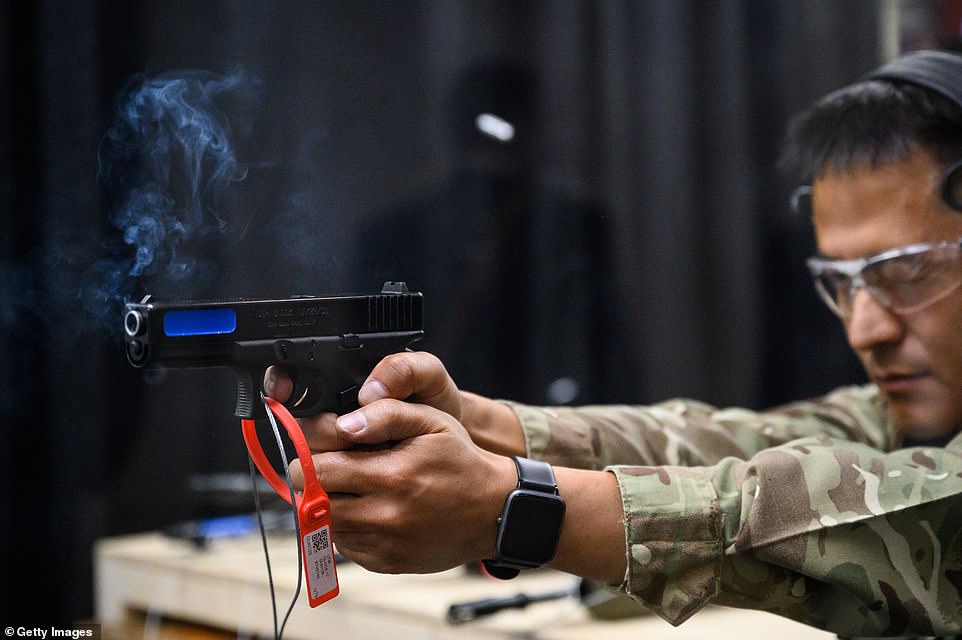 The four day event sees over 1,000 defence, technology and security manufacturers display their latest developments to Governments and security companies from around the world

‘Teams from HMRC, BEIS [the Department for Business, Energy and Industrial Strategy], DIT-ECJU [the part of the Department for International Trade that deals with export control] and the other government agencies responsible for enforcing the law at DSEI are on site during setup and throughout the exhibition.

‘We will be welcoming ministers from the UK government, as well as MPs from across parliament, who will meet British companies and underscore the important role that the defence and security sector plays. International official defence delegations are also invited to attend by the Department for International Trade, providing delegates with the opportunity to see equipment, much of it British-made, up close.’

He said the organisers ‘respect the right to lawful protest’.

Kirsten Bayes, a spokesperson for Campaign Against Arms Trade, which campaigns against DSEI, said: ‘The mayor is absolutely right that this arms fair should not be taking place in September.

‘He is also right to point out that so many people fleeing conflicts globally have made their home in east London, where the fair is due to take place: it will have a huge impact practically and emotionally on local people.

‘Our view is that holding arms fairs anywhere is wrong: the industry makes its profits through creating death and disaster around the world.

‘Local communities have stood up against these fairs wherever they have been held across the country, whether that is Liverpool or Glasgow, Bristol or Birmingham. Our country needs to say no to the trade in dreadful weapons, stand up for peace and human rights, and put an end to these arms fairs.’