By Gregory Kirby For The Daily Mail

Spiralling childcare costs will not be reviewed by ministers despite a survey that found the vast majority of parents think it is too expensive.

A survey of more than 20,000 working parents, conducted by a dozen charities, found that 97 per cent said they found childcare too costly.

One-third said they paid more for someone to look after their children than they did for their rent or mortgage. And thousands claimed the costs were financially crippling and stunting their careers.

The poll came before a debate in parliament yesterday – prompted by a petition signed by over 112,000 parents – calling for an independent review into childcare funding. 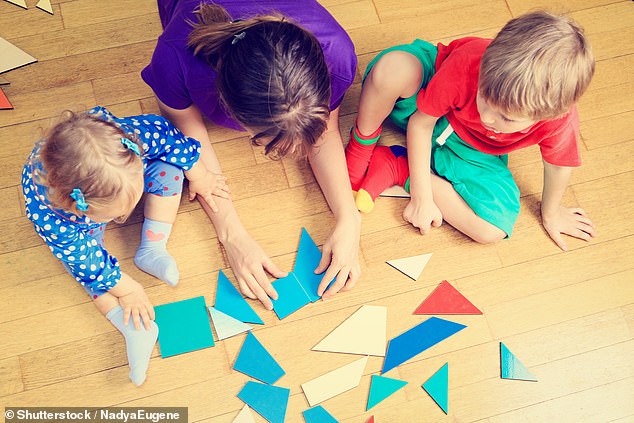 Joeli Brearley, the founder of the charity Pregnant Then Screwed, which backed the latest survey, said: ‘All we want from the Government is transparency.

‘The cost of childcare continues to increase, forcing more parents out of their jobs, and the quality of our early years settings decrease, which will have serious long-term consequences for all of us.’

She added: ‘We don’t believe that the Government has a grasp of how big the issue is and the impact it is having on families and the economy.’

But children’s minister Vicky Ford said it would be ‘inappropriate’ to open a review into childcare funding while a multi-year spending review was already under way.

She told MPs yesterday: ‘We are not hearing systemic failures in any local area about parents not being able to access childcare.

‘It’s encouraging to see that the proportion of parents using formal childcare appears to be generally similar to before the pandemic.’

She added: ‘Those leaving the market [childcare services] are less likely to be providers in disadvantaged areas of the country.

‘Only 12 per cent of those leaving the market were in the most deprived areas.’

But Catherine McKinnell, Labour MP for Newcastle upon Tyne North, who called for the independent review, said: ‘I thank the minister for that response but I fear the over 112,000 petitioners who signed the petition would disagree with her assessment that there isn’t a problem to address here.’

With a full-time place costing £12,376 a year on average, the UK has the third most expensive childcare system in the world behind Slovakia and Switzerland, according to the Organisation for Economic Cooperation and Development.

Stella Creasy, Labour MP for Walthamstow, who attended the Commons debate yesterday with her newborn, quoted Ofsted figures showing that more than 400 nurseries had been forced to close during the pandemic.

She claimed that 30 per cent of local authorities did not have enough space to accept more children in nurseries even before the pandemic struck.

Siobhan Baillie, Tory MP for Stroud, said: ‘Parental life should come with a military gold-command schedule planner. Instead it’s made up of grandparents, if you’re lucky for them to still be about, after-school clubs, childminders, understanding bosses, nurseries and friends doing favours for each other.’

A study by the TUC found that the cost of a one-year-old’s nursery provision rose four times faster than wages in England between 2008 and 2016. In London – this rate was found to be more than seven times faster.