Donald Trump joked on Saturday he would ‘love’ to be mayor of New York City, claiming he could clean it up and help stop crime in no time if he rose to the position once held by his former personal attorney Rudy Giuliani.

The former president also hinted again while visiting with police officers in New York on the 20th anniversary of the 9/11 terrorist attacks that he may make another White House bid in 2024.

‘Well that’s an interesting question,’ Trump chuckled and was met with a round of laughs from the room. ‘I would love that.’

‘I’d tell you, we could straighten it out. I’d say, ‘Fellas, good luck, go to town.’ They’d be announcing in one week, ‘There’s no crime in this city. There’s no crime. What the hell happened?’ I’d say, ‘That was the easiest job I’ve ever [had].’

‘That would be such an easy job,’ he added. ‘But I appreciate that question, that’s cool.’ 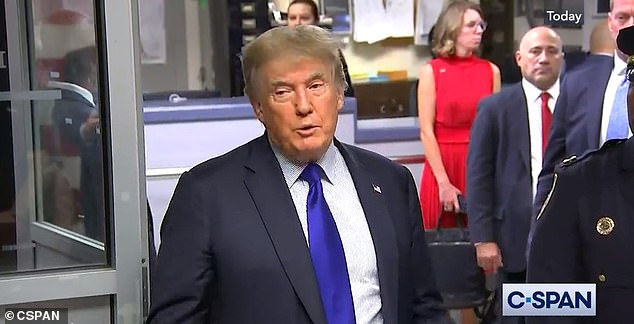 The former president insisted he didn’t want to give any ‘positive’ indication that he would run for mayor in New York because it would spread as truth.

Trump spent his whole life in New York, building his empire there. But while president, he changed his residency to Florida, claiming New York isn’t the same as it once was.

He resides in Palm Beach at his Mar-a-Lago resort with wife Melania and 15-year-old son Barron, who now goes to private school in the Sunshine State.

Trump’s eldest daughter Ivanaka Trump also moved down to Miami, Florida with her husband, Jared Kushner, and three young children at the end of her father’s four-year term.

Trump has not yet announced a 2024 bid for president, often citing campaign finance laws as the reason he has avoided jumping in or revealing anything publicly. He does, however, often say that people will be ‘happy’ with his decision, making it obvious that he will run again for the White House. 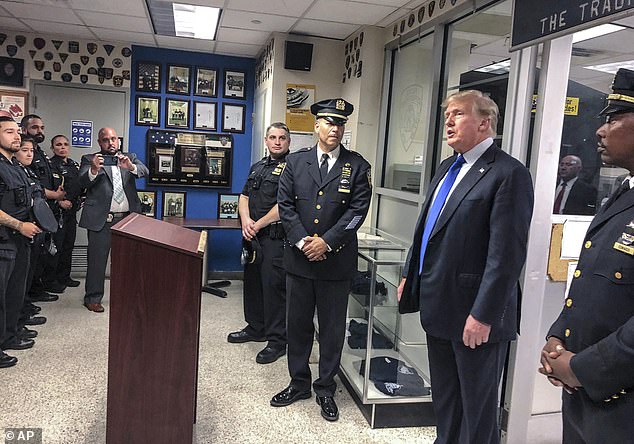 The former president, however, hinted again toward a White House run in 2024, claiming he can’t announce yet due to campaign finance laws

‘Are you going to run again, Mr. President?’ an officer asked Saturday.

‘I know what I’m going to do. But, we’re not supposed to be talking about it yet from the standpoint of campaign finance laws, which frankly are ridiculous OK, if you want to know the truth. But we have to live with it.’

The former president then launched into a series of listing his accomplishments as president.

As Trump visited the precinct in New York City, Biden was joined by former Democratic Presidents Barack Obama and Bill Clinton at the traditional name-reading ceremony at the site of the collapsed Twin Towers.

Former Republican President George W. Bush, who was president at the time of the horrific terrorist attacks, spoke Saturday at a memorial service near Shanksville, Pennsylvania – where one of the four hijacked planes crashed when passengers on board fought the al Qaeda terrorists.

Trump’s spokeswoman Liz Harrington said that the former president ‘had the option to attend’ the ceremony in downtown New York City with Biden, Obama and Clinton ‘but decided to honor the day with different stops.’

Before the visit to the precinct in New York, the former president virtually addressed the Let us Worship evangelical event held on the National Mall in Washington, D.C. on the 20th anniversary of 9/11.

‘As a lifelong New Yorker, it was extraordinary to witness the strength and resilience of people of that incredible city — and it is indeed an incredible city,’ he said in the prerecorded remarks.