A professor at Syracuse University has drawn the ire of many after a series of controversial tweets that seem to make light of the September 11 terror attacks.

‘It’s twenty years since 9/11 and I’m still really disturbed by how many white pundits and correspondents talk about it,’ wrote Jenn M. Jackson – who bills theirself as ‘a queer genderflux androgynous Black woman, an abolitionist, a lover of all Black people’ on twitter.

Jackson also called the attacks an offensive against ‘heteropatriarchal capitalistic systems… that many white Americans fight to protect,’ in  a tweet to their 33,600 followers.

The assistant professor of political science made the remarks in a series of tweets Friday, a day before the 20th anniversary of the attacks that killed 2,977 people. 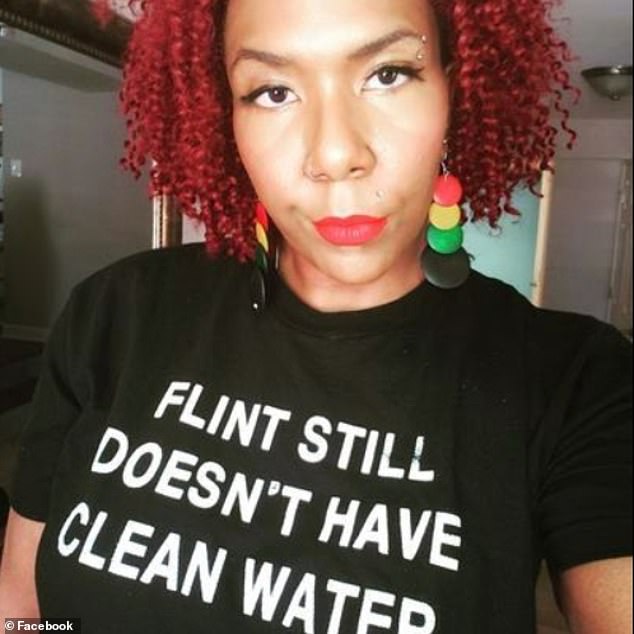 Jackson’s personal website describes the professor as ‘a queer genderflux androgynous Black woman, an abolitionist, a lover of all Black people’

‘It’s twenty years since 9/11 and I’m still really disturbed by how many white pundits and correspondents talk about it,’ Jackson wrote to their 33,600 followers on Twitter 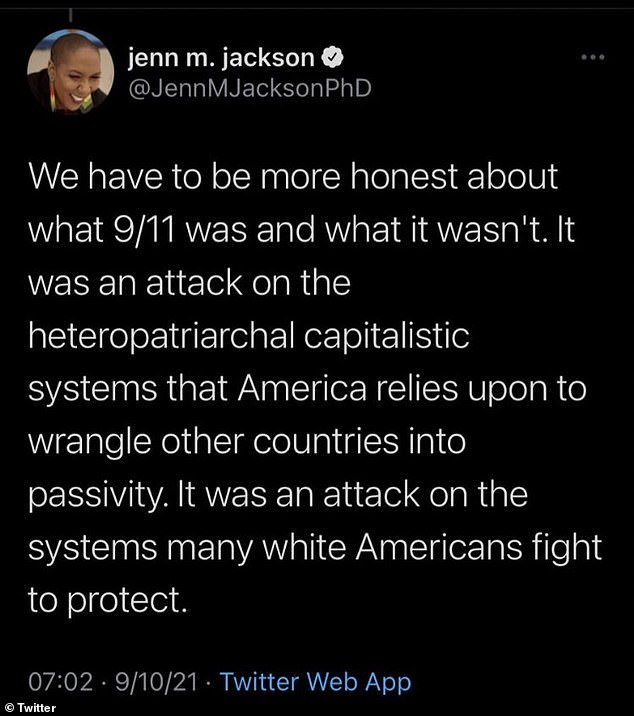 In one particular barrage of tweets, Jackson challenged former chief of staff Andy Card, who served in President George W. Bush administration during the attacks – and who first told the commander in chief that America was under attack on September 11, 2001. 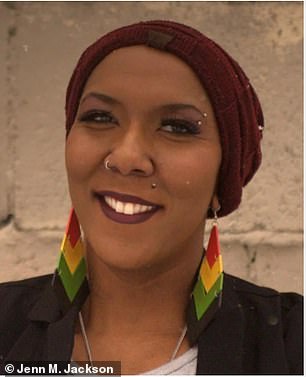 The assistant professor of political science made the remarks in a series of tweets Friday, a day before the 20th anniversary of the attacks that killed 2,977 people

‘I’m watching Andy Card and [Former Homeland Security Secretary] Jeh Johnson on MSNBC,’ she wrote. ‘Card just said that 9/11 was the first time that Americans ever felt fear. He said that it was the last morning we woke up without fear and that the “terrorists” succeeded in introducing us to fear.’

Jackson went on to criticize the notion.

‘White Americans might not have really felt true fear before 9/11 because they never felt what it meant to be accessible, vulnerable, and on the receiving side of military violence at home. But, white Americans’ experiences are not a stand-in for ‘America,” they wrote.

‘Plenty of us Americans know what it’s like to experience fear and we knew before 9/11. For a lot of us, we know fear *because* of other Americans,’ Jackson continued.

‘We have to be more honest about what 9/11 was and what it wasn’t,’ Jackson continued. ‘It was an attack on the heteropatriarchal capitalistic systems that America relies upon to wrangle other countries into passivity.’

The assistant professor of political science decided to single out Andy Card in a slew of tweets, insinuating the nation’s former chief of staff – a white man – was out of touch when it came to Americans’ reactions and interpretations of the September 11 terror attacks

‘It was an attack on the systems many white Americans fight to protect.’

She then declared: ‘We have to be clear that the same motivations that animated America’s hypervigilance and responsiveness to “terror” after 9/11 are now motivating the carceral state and anti-immigration policy.’

Many on social media rejected Jackson’s assessment of the September 11 attacks.

Jackson declared to her hordes of followers: ‘We have to be clear that the same motivations that animated America’s hypervigilance and responsiveness to “terror” after 9/11 are now motivating the carceral state and anti-immigration policy’

Another Fox News journalist, Will Ricciardella, joked, ‘When you support your college football team, this is the type of propaganda you’re financially supporting.’

Jon Levine, a reporter with the New York Post, simply remarked: ‘This woman is a professor at Syracuse University.’ 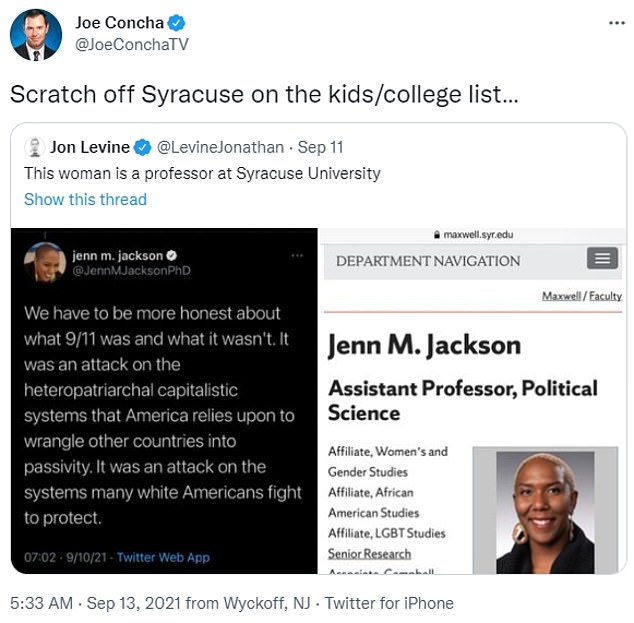 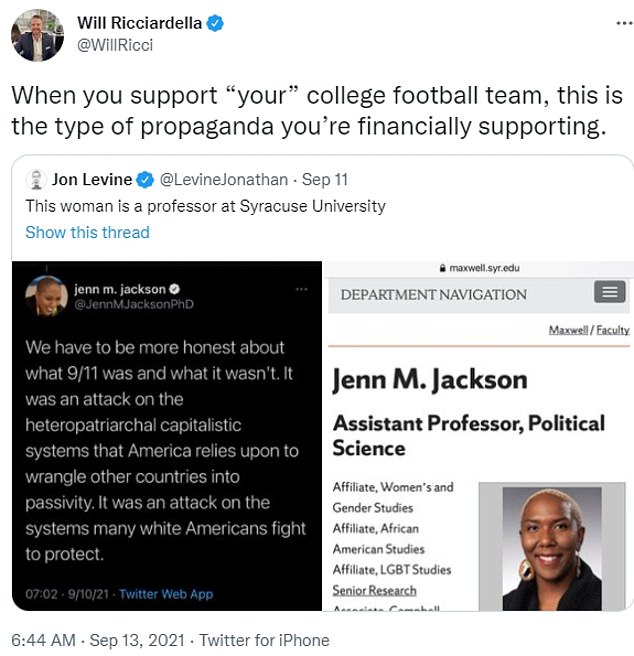 Fox News journalists Joe Concha and Will Ricciardella joked that Jackson’s tirade was a detriment to the reputation of her esteemed employer, Syracuse University

Jackson’s Twitter account has since been made private, but a series of archived tweets also reveal praise for China for its efforts against the coronavirus and blasting capitalism.

‘Everyone talks mess about socialism and communism but countries like South Korea and China bent their #COVID19 curves with communal methods. Not capitalistic hoarding,’ Jackson tweeted last March.

Jackson and their literary agent did not immediately respond to inquiries from DailyMail.com on Sunday night. 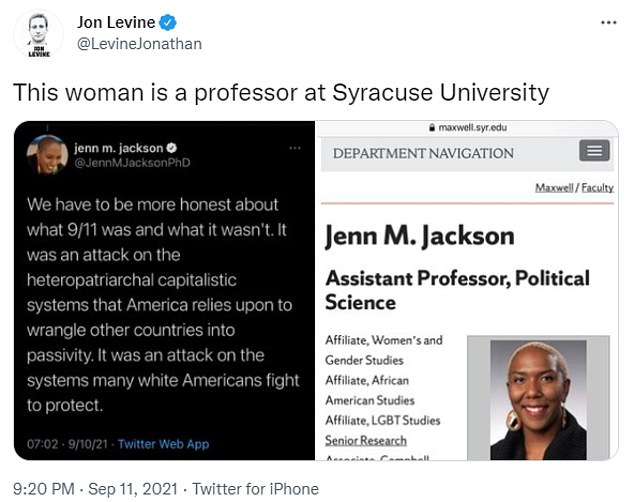 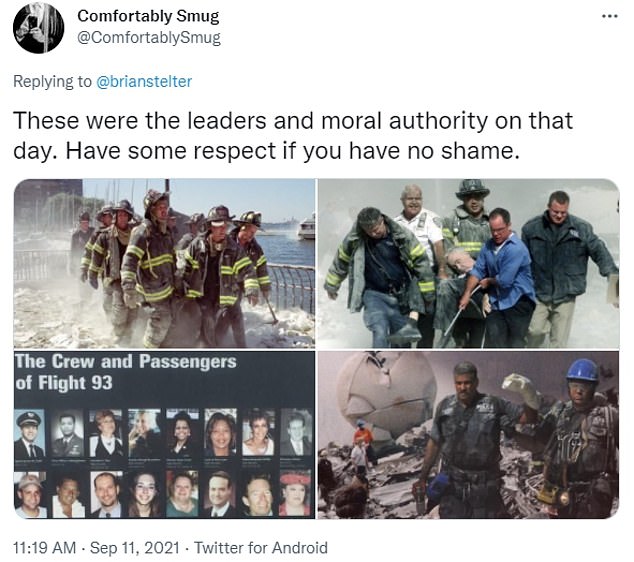 A slew of social media users clapped back at Jackson’s controversial comments concerning the September 11 attacks on Twitter, until she was forced to set her account to private

The remarks drew strong reaction and mockery from critics, some of whom accused Jackson of sympathizing with or even endorsing the deadly attacks.

‘Of course, because if Osama bin Laden was about anything, it was striking down heteropatriarchy…’ tweeted journalist Matt Taibbi.

Television journalist Megyn Kelly responded with strong language, tweeting: ‘As an S.U. poli-sci grad, I just wanted to say, Ms. Jackson, you can F right the hell off.’

‘Wonder what @JennMJacksonPhD thinks about ISIS and Boko Haram’s atrocities in West Africa and the Sahel,’ pondered Kyle Matthews, executive director of the Montreal Institute for Genocide and Human Rights Studies.

‘Thank you Osama, the feminist,’ another person tweeted. 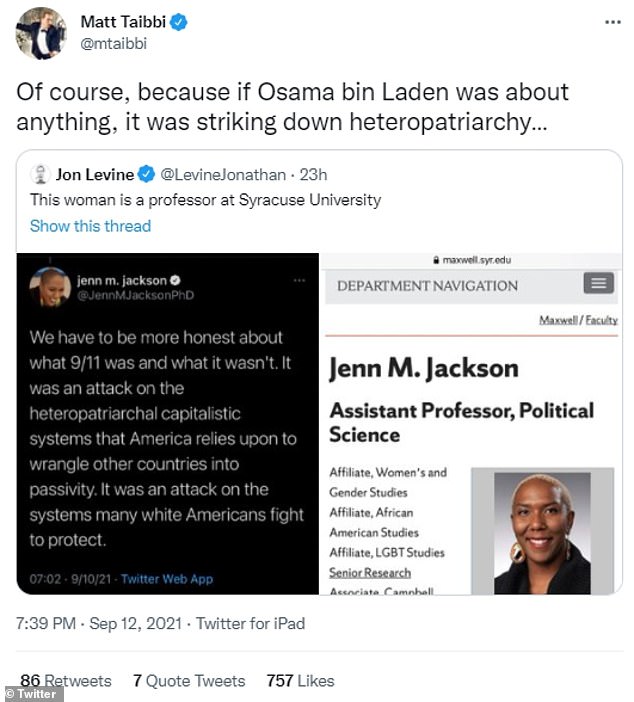 Many of the angry reactions to Jackson’s comments were too crude for publication.

Jackson’s out-of-office email response said that they are on research leave for the fall term, but will return to the classroom in Spring 2022.

Jackson also published a regular column for Teen Vogue, though the professor does not appear to have contributed to the publication since February.

The professor is also the author of the academic book Policing Blackness. Jackson’s next book, Black Women Taught Us, is due to be published next year by Random House. 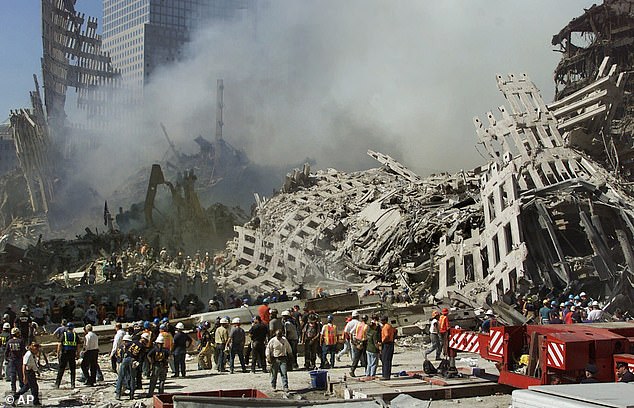 ‘It was an attack on the heteropatriarchal capitalistic systems that America relies upon to wrangle other countries into passivity,’ wrote Jackson of the attacks on September 11, 2001