Beaten US Open finalist Leylah Fernandez beautifully pays tribute to the New York crowd and the 20th anniversary of 9/11, saying ‘I hope I can be as strong and resilient as New York has been in the last 20 years’ after loss to Emma Raducanu

Leylah Fernandez paid tribute to the New York crowd and spoke with maturity beyond her 19 years on the 20th anniversary of 9/11 following her loss to Emma Raducanu in the US Open final.

The 19-year-old Canadian was beaten 6-4 6-3 by the British qualifier on Saturday night, but wowed the crowd with her post-match speech.

‘It’s incredible. I honestly have no idea what to say,’ Fernandez said. 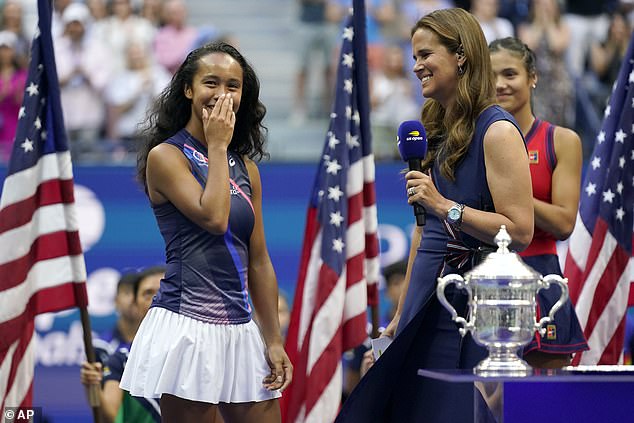 ‘Today is going to be hard but Emma played amazing so congrats to your team. I am very happy with how I’ve played. It’s been amazing having the New York crowd back and having you cheering me on, thank you everyone.

‘Thank you for always believing in me. You guys were amazing, you guys were there at my lows and when i was suffering and you were also there when i was having the best times.

‘Thank you for always believing in me and helping me. I also want to say I want to be back here in the final with the right trophy.’

But before she finished her speech, she paid tribute to the city of New York and the United States on the 20th anniversary of the 9/11 terror attacks.

‘I know it was especially hard on this day for New York and Americans everywhere and just want to say I hope I can be as strong and resilient as New York has been the last 20 years.

‘Thank you for always having my back and cheering for me, I love you New York, see you next year.’