The Texas Republican Party’s official website was hacked Saturday in an apparent attack related to the newly enacted bill banning abortion in the Lone Star State after six weeks.

On the homepage, the hacked version read: ‘Texas: Taking Voices from Women to promote theocratic erosion of church/state barriers.’

The original, according to a side-by-side analysis, said: ‘Giving Texans a voice to promote conservative philosophy and principles’.

‘We are committed to taking away all the rights of women so we can live our prosperous, Bible-thumping dream,’ the Texas GOP’s mission statement was altered to read in the hacked version of the site.

The hacker – or hackers – embedded a YouTube video on the website with the 1987 song ‘Never Gonna Give you up’ by Rick Astley. The spamming of that song has become a common trolling act known as ‘Rick Rolling.’

Whoever hacked the page also placed an image known as ‘Goatse’ prominently on the website. 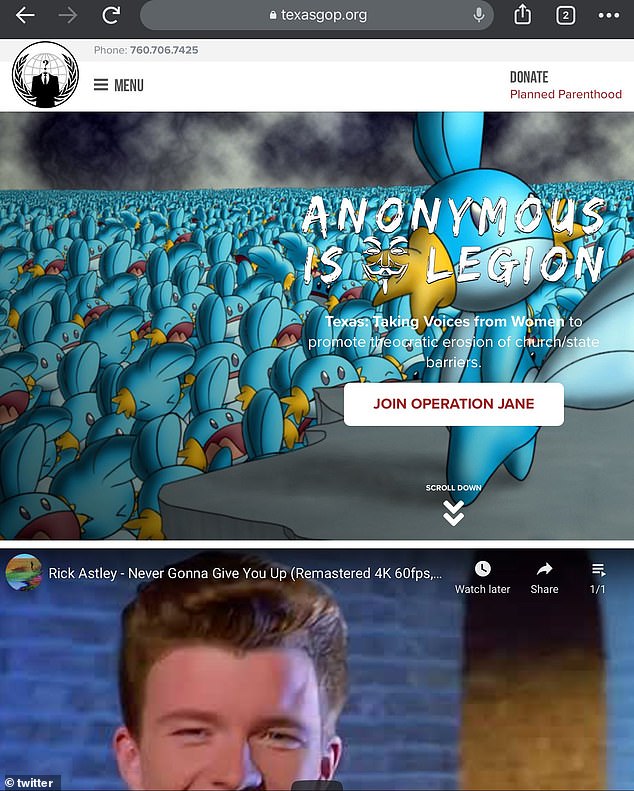 Hackers launched an attack on the Texas Republican Party’s official website, replacing images with memes and text with accusations they are ‘Taking Voices from Women to promote theocratic erosion of church/state barriers’ 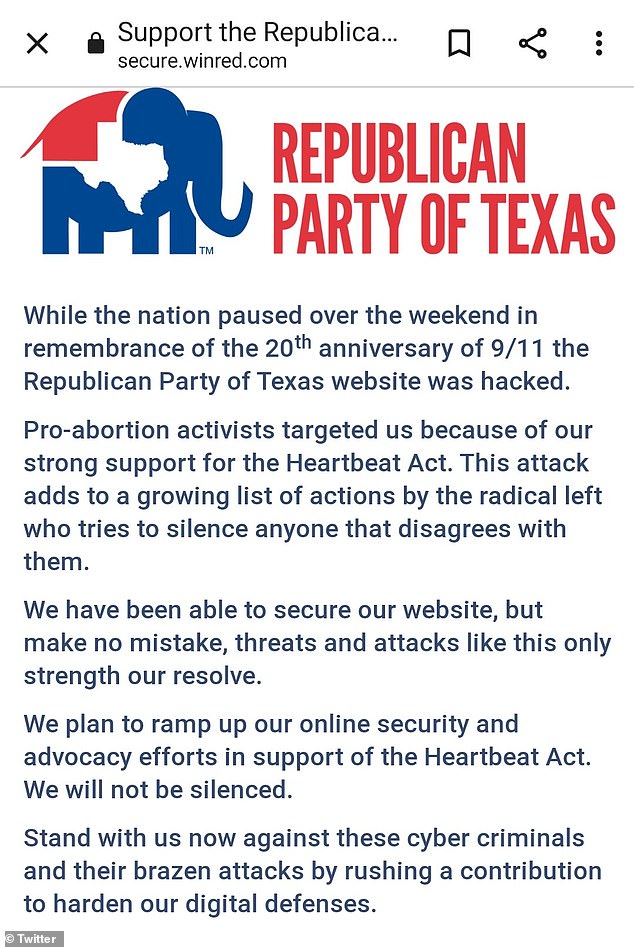 At the bottom of the website, the hackers included a warning reading: ‘Disclaimer: Hackers on Steroids are 10 times more effective at romance than 100% of Republicans. Trans demon hackers are coming to get you. Abortion is a choice.’

‘Hackers on Steroids’ references how Anonymous was described in the media when the hacktivist group emerged more than a decade ago. This indicates the attack may have come from this shadowy group.

The altered version of the homepage of TexasGOP.org also prompted visitors to join ‘Operation Jane,’ a group launched by the hackers to combat Texas’ restriction new abortion law.

The bill was challenged earlier this summer and a court ruled it unconstitutional.

The Supreme Court, with a 6-3 conservative majority, ruled that the bill barring abortions after a heartbeat is detected, which is around the six week mark, is constitutional – sending pro-abortion activists and progressives into a frenzy.

‘Pro-abortion hackers changed our web page for a short time before we took it down,’ Texas GOP Chairman Matt Rinaldi said in a statement to The Washington Times on Saturday. ‘We will be increasing security and appreciate the hackers providing us with a fundraising opportunity—funds we will use to promote even more robust Pro-Life legislation in Texas.’

‘It made my day to see the Texas GOP’s website hacked today by Anonymous in support of [Planned Parenthood],’ Jon Cooper, former finance advisor to Barack Obama, tweeted.

Prior to being taken offline, the defaced version of the site linked to the donation page for the Planned Parenthood of Greater Texas.