‘Drunk’ Giuliani imitates Queen Elizabeth, denies hanging out with Prince Andrew and young girls, and calls top US general an ‘idiot’ and ‘a*****e’ in unhinged rant during 9/11 commemoration dinner

By Ariel Zilber For Dailymail.com

The former New York City mayor spoke at the Cipriani restaurant on Saturday, appearing at an annual dinner event to commemorate the September 11, 2001 terrorist attacks.

Giuliani’s comments about Prince Andrew were made on the same day that lawyers for Virginia Giuffre said they served the British royal with legal papers. Giuffre alleges she was sexually assaulted by Prince Andrew – an allegation that he denies.

In 2002, just months after the September 11 attacks, Giuliani was awarded an honorary knighthood by Queen Elizabeth II. During Saturday’s dinner, Giuliani tried to mimic the monarch.

‘She said, “You did a wonderful job on Sept. 11”,’ Giuliani said while attempting to imitate a British accent.

‘And therefore I’m making you an honorary knight, commander of the royal something or other,’ he said.

Several clips posted to Twitter show Giuliani give a rambling talk at the podium.

The former mayor took aim at Joint Chiefs Chairman Mark Milley, whose name Giuliani mispronounces after referring to him as ‘Miley.’ 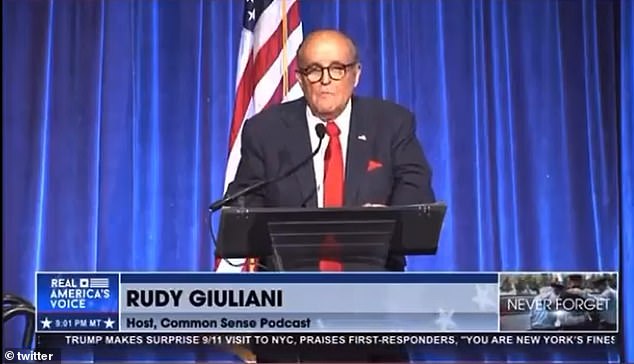 ‘How’s that guy a general?’ Giuliani said, slamming Milley and the Biden administration for the chaotic withdrawal from Afghanistan, calling it ‘freaking insane.’

The former mayor, who most recently served as former President Donald Trump’s personal attorney, lashed out at Milley and the administration for withdrawing from the Bagram air base in Afghanistan.

Giuliani then describes how he would approach Milley if he saw him in person.

‘I wanted to grab his stars and shove it down his throat and say, “It’s 400 miles from China, a-hole! China is going to be our enemy for the next 40 years! You have an airbase 400 miles from them and you’re giving it up? Idiot!” Giuliani said.

‘What the hell is wrong with you? Who pays you?’